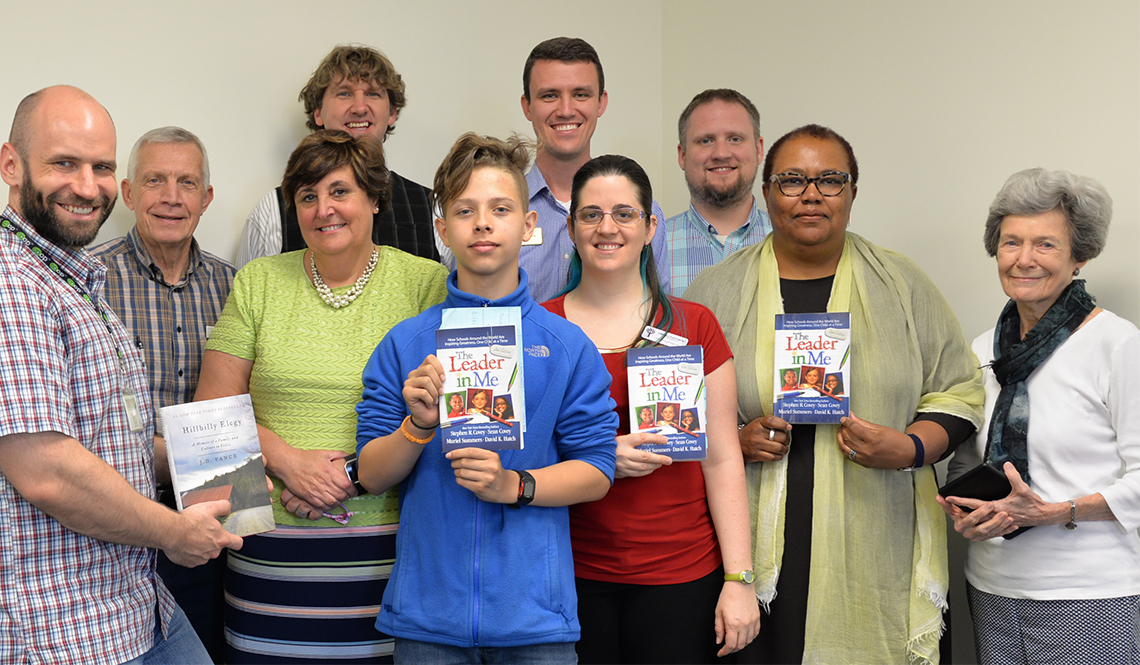 Mayor Ian Baltutis (back row center, wearing a solid blue shirt) and members of his Mayor's Book Club holding copies of "Hillbilly Elegy: A Memoir of a Family and Culture in Crisis," by J.D. Vance and Stephen R. Covey's "The Leader in Me: How Schools Around the World are Inspiring Greatness, One Child at a Time."

When Ian Baltutis was campaigning door-to-door to become the mayor of Burlington, residents raised issues important to them. Invariably, someone would mention a book relating to the topic of his or her discussion.

Baltutis kept a running list so he could read the books when he had time. After becoming mayor in 2015, he launched the Mayor's Book Club so residents could read a selected non-fiction book and talk about how it relates to life in Burlington.

The books can be checked out from the Alamance County Public Library. Baltutis — who was re-elected in 2017 — leads the monthly discussions, hosting both a lunchtime session (which rotates among different city restaurants) and an evening gathering at a local brew pub.

When the club read $2.00 a Day: Living on Almost Nothing in America, residents were joined by staff and volunteers from the local food pantry and homeless center.

An ex-convict from a nearby residential program took part in the club's discussion of Bryan Stevenson's Just Mercy: A Story of Justice and Redemption, a book about the prison system. With Dreamland: The True Tale of America’s Opiate Epidemic, by journalist Sam Quinones, the city's police chief and a drug enforcement officer attended.

For the discussion about The Maker Movement Manifesto: Rules for Innovation in the New World of Crafters, Hackers, and Tinkerers, author Mark Hatch joined the conversation via Skype.

Discussions last about an hour, with participants usually staying on to socialize. In addition to the book list Baltutis accrued from the campaign trail, reading choices come from members of the community and library staff. Fittingly, Mayor Baltutis gets the final vote on what Burlington's book club participants will read.

In addition to the five titles noted in the photo caption and text above, Mayor Ian Baltutis's book club in Burlington, North Carolina, has read and discussed:

This article is adapted from the "Community Engagement" chapter of the AARP book Where We Live: Communities for All Ages — 100+ Inspiring Ideas From America’s Community Leaders. Download or order your free copy.