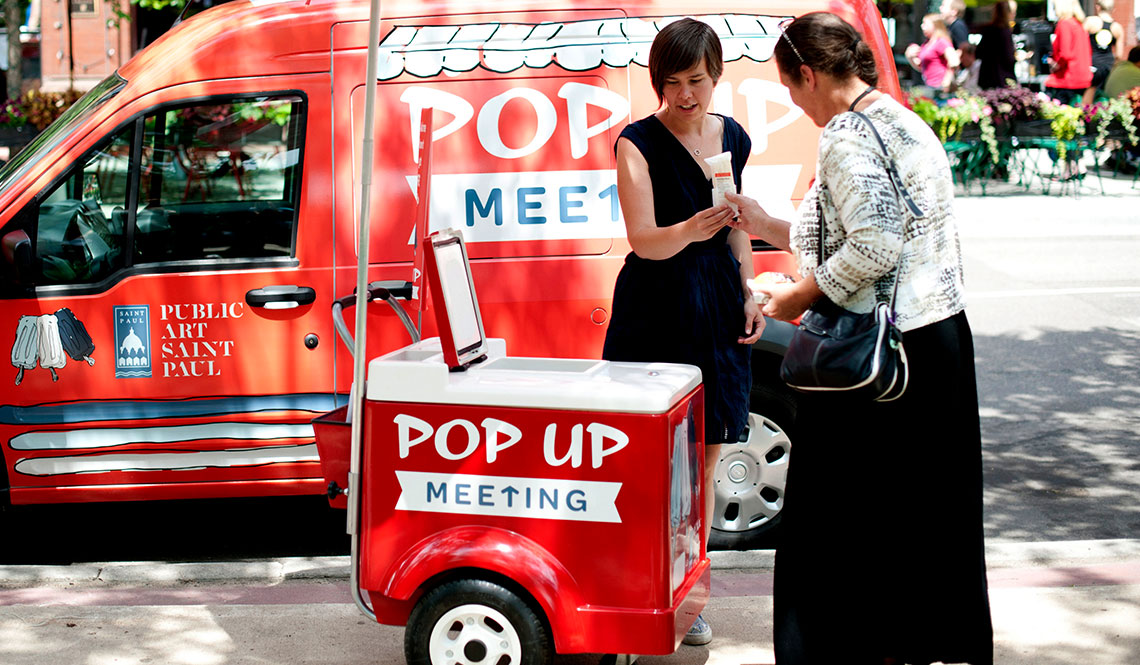 It was 7 p.m. and Lovelee had arrived for a meeting, held in the basement of a nursing home. She was excited about sharing plans for a redesigned neighborhood playground. "Seven or eight people showed up," she recalls.

Those few attendees were the voice of the community that night, Lovelee says, while many others — like those who work evenings, couldn't find or afford a sitter, or were unsure about stepping inside a strange place — were left out of the conversation.

Lovelee's solution: Pop Up Meetings. After receiving permission from the city's director of public works, she secured a city vehicle, painted it orange and drove it to parks, festivals and other public places, bringing city staff and sometimes even Mayor Chris Coleman with her. Instead of expecting residents to show up at a place the city government selects, the Pop Up Meeting takes city officials to where the people are.

To encourage public participation, the traveling roadshow gives away mint-lemonade ice pops that a local business donated. (A sign reading "Ask me how to get a FREE St. Pop" helps start the conversations.) "It's very different than standing in front of people with a PowerPoint," says Lovelee.

Mayor Coleman praised the pop-ups for getting city staff in touch with "folks who normally aren't going to be at the Chamber of Commerce breakfast," he says, "people who don’t feel like they've been included so far."

During the summer of 2016, the second year of the pop-up meetings, more than 1,600 people filled out surveys at the pop-ups about what they would like to see in their communities. Almost 70 percent had never before attended a public meeting.

Pop Up Meetings have become a key tool in Saint Paul's community-engagement toolbox. When city staffers were seeking ideas for a new comprehensive plan, the mobile meeting vehicle showed up during a summer-long series of neighborhood barbeques sponsored by the police department and held at city parks and recreation centers. The Pop Up Meeting team also appeared at a winter solstice festival. Rather than ice pops, hot cider and s'mores were served.