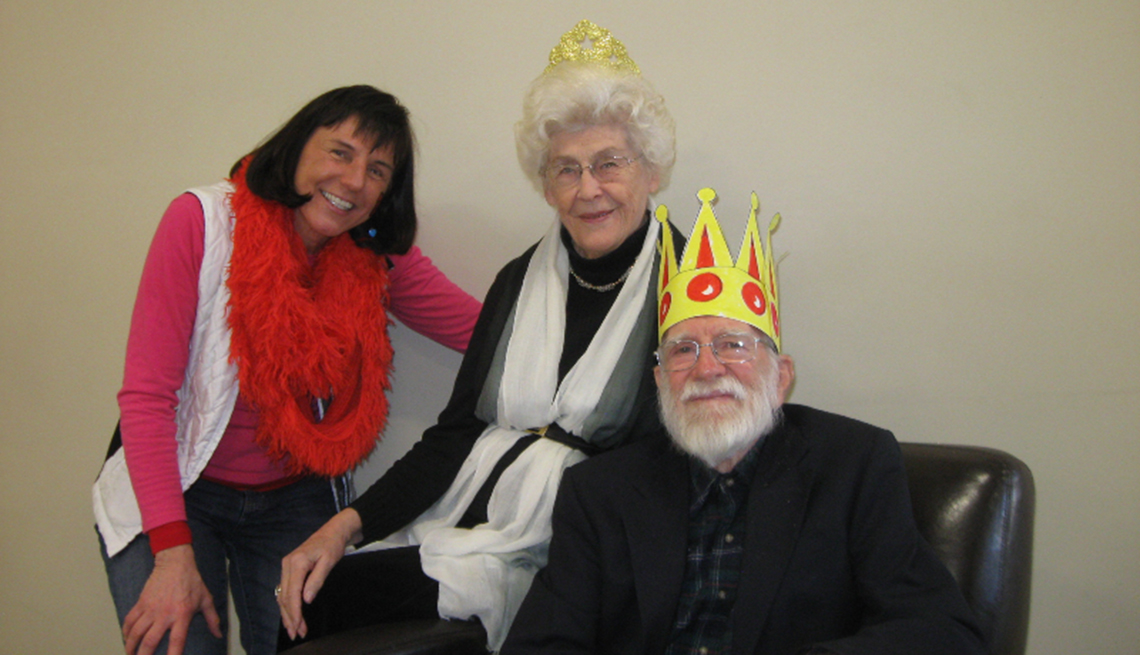 Pat Rumbaugh (left) with the King and Queen from a human chess set "Play Day" in Takoma Park, Maryland. (In real life, the married couple play chess every evening before bed.)

"I'm trying to save play," says Pat Rumbaugh. The former physical education teacher and coach laments that today's children rarely play spontaneously, making up rules and negotiating among themselves.

Rumbaugh is also concerned that adults —and especially older adults — often stop playing games and having fun altogether. "Seniors who don't play are missing out on the most important part of life," she declares.

Due to Rumbaugh's advocacy and action, the Takoma Park, Maryland, resident is often referred to as "The Play Lady." In 2009, Rumbaugh gathered half a dozen people to discuss promoting play. Six months later, some 200 people gathered to do face painting, play tennis and Legos, juggle and dress up, and more. Rumbaugh has organized more than 60 free events, and her small city sees three "Play Days" a year — including one just for adults — that attract several hundred people. Because of Rumbaugh her hometown has been named a Playful City USA eight times by the national play-focused nonprofit KaBoom!

The local Takoma Plays movement has morphed into the nonprofit Let's Play America, with Rumbaugh, the author of Let's Play at the Playground!, as cofounder.

Play can be as nonactive and solitary as reading a book that you enjoy. It can be social, like playing bridge or Rummikub or doing a puzzle with friends. It can be physical — say, a pickup basketball game or kicking a ball around. It can be competitive play or totally friendly.

There's creative play, where you might learn how to do origami or decorate a cake, and messy play, where you make a mud pie. It could be imaginative play, one of my favorite things. Even the women's Red Hat Society, to find an interesting or flamboyant red hat, is play.

Play is really what you make it.

Say an extended family comes to a Play Day event and we've set out cardboard boxes of all sizes. Young children see the boxes and want to go for it. Next thing you know, the grandparents get right in and play with them. Sometimes we'll have markers, tennis balls, ropes, sheets, and other things nearby. It's so great to see people of all ages playing together, meeting each other, getting to know each other.

I saw a 95-year-old woman playing board games with a four-year-old, and they were having this wonderful conversation. Some of these opportunities are very unlikely to happen if you don't get out in the community and play together.

People meet other people, they let their inhibitions down, they learn new activities or do things they haven't done since they were children. People of all ages realize they don't need to have their whole day scheduled 24/7. It makes you feel good intrinsically to play and to be with others, and you help each other. Teens and preteens who volunteer have told me, "I had so much fun, it wasn't even like I was doing community service."

"I saw a 95-year-old woman playing board games with a four-year-old, and they were having this wonderful conversation. Some of these opportunities are very unlikely to happen if you don't get out in the community and play together."

2. Describe what goes on at an adult "Play Day" event.

After we had our first Play Day in 2009, I started to get this request: "We want an adult Play Day." People also wanted some adult things, particularly beverages.

We bring a lot of what we already have — such as cornhole, Twister, hula hoops. We also set up mini tennis, bocce, horseshoes, badminton, a giant chess set, a giant Connect Four. We try to have a band, too. The first year the lead singer dressed up as Elvis. People loved that.

Even though the name is Adult Play Day, we don't insist it's only for people 21 and older. Say parents have a two-year-old and the sitter falls through, so they want to bring their child, that's fine.

We hold the event at a VFW hall. We get two or three food trucks to come, which works out great and is a lot less work. 'Super seniors' come from apartment buildings where seniors live. Many people in their 50s, 60s, 70s, even 80s who are still in their homes join us.

3. In our society, when do you think people stop playing and why?

Last spring, I got to go to the Aspen Institute Project Play Summit. I found out that 70 percent of 13-year-olds stop playing on a team. That's a horrible statistic. That's why they're holding Project Play, because they're trying to find ways to get teens to continue playing. That's competitive play. But as a physical education teacher for over 30 years, I saw the decline from middle school to high school, particularly for kids who are serious about their academics. Then in college, you start to see more of a drop-off.

I think when people become busier as adults — with full-time jobs, and maybe they're getting their advanced degrees at the same time — their time gets limited. And then a mixture of things happen. Children bring out our playful side, just like puppies and kitty cats, but at the same time a lot of people play less because they almost think, "That's for kids. I should set it aside." On the other hand, some people pick up things. They realize, you know, it shouldn't be all about work and no play.

When I encourage adults to play, there are often giggles and, "Oh, come on, Pat." Some are adventurous, whereas others say, "Oh, that's for children" or "I don't know, that might be too loud." I tell them the board-game room might not be too loud, and tai chi is probably mainly adults. With hula hoops, women especially often say, "I used to be so good at that, but I can't do it anymore. My six-year-old daughter can do it." But I have them try the larger, heavier hula hoops, and within 20 seconds they're hula hooping, and they're thrilled.

Older people need play just as much as anyone. As we age we lose our strength, flexibility, and sometimes we have senior moments, but when we laugh and play we feel great. Seniors deserve to feel good, just like any other age group. Seniors who don't play are missing out on being carefree, playing games either alone or with others. Whether people play a board game or do something physical, both bring joy. Playing takes you away from your troubles. You let everything go for a while and enjoy the moment. 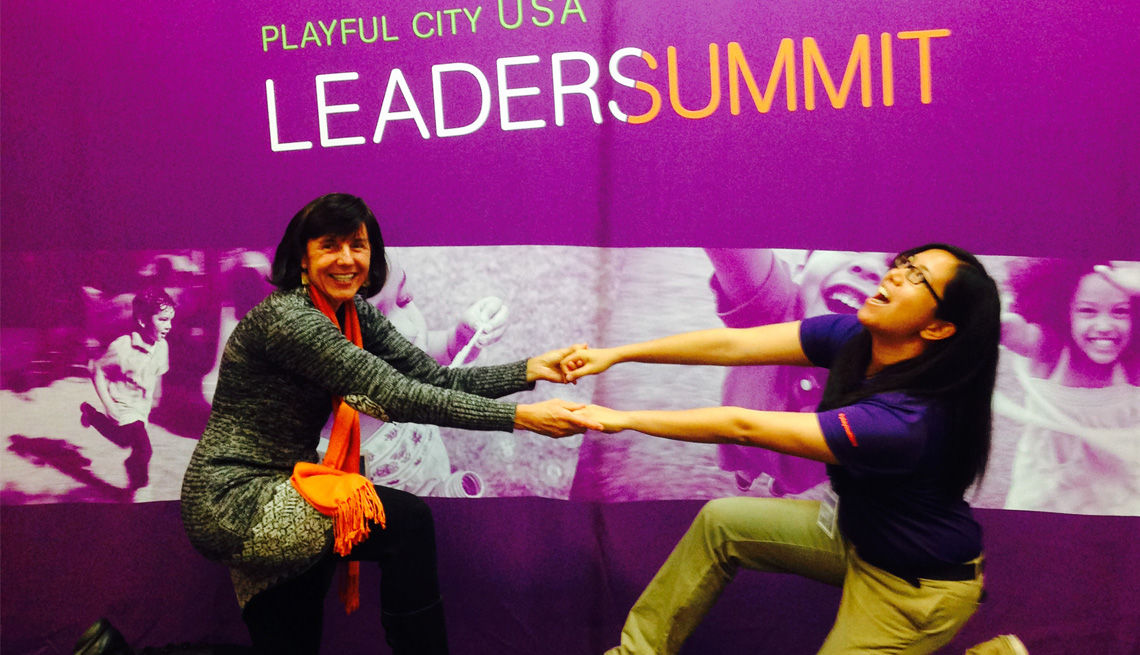 Pat Rumbaugh and a helper engage in hand-to-hand tug-of-war combat.

4. What's your advice for people who want more play?

First, gather people who really care about play, who want to form a play committee. It can be as small as two or three people, or it can be 20. Ask yourselves what you want to play, what you'd like to see played more or brought into the community, and look at your facilities. For example, we have an indoor pool in my community. It's a public facility, but people still have to pay to use it. So we've gotten small grants for two Splash-and-Play pool parties.

Say you have a playground with a pavilion next to your community center with an indoor gym or big all-purpose room. That would be ideal. Think wedding: You don't want to plan something for outdoors and if it rains, you won't have a backup plan.

After our first Play Day, the head of the recreation department congratulated us and said, "Pat, you've got to go to a bigger venue. How about the middle school next year? Don't worry, I'm going to put it in the budget." I think it might be $1,000 to rent for a couple of hours and pay a custodian. In some cities and communities, that won't be a problem. For others, it might be a financial burden, and they might have to raise money.

To get older adults involved, ask yourself, "Where are these seniors?" For example, I start right where I live when I'm out walking. I've knocked on seniors' doors, people I know, to be sure I invite them. Go to churches and places of worship.

We have a flier made for every Play Day. We put as many as four languages on it. In September we hold our Play Day on Saturday, but the Adventists meet on Saturdays, so none of them come. In the winter, we hold our winter Play Day on Sunday, and some people don't come because they're at worship.

Pickleball, cornhole, disc golf, drumming and petanque are helping young and old stay physically active, have fun and connect with one another. Read

5. What nonprofit groups, government agencies, local leaders and others should be involved?

If you have a recreation department, that makes a lot of sense. But I wouldn't put it all on them. I would try to bring in some of your city government. I would reach out to volunteers immediately. You need people to take notes and write up the minutes. You need someone who doesn't mind doing some advertising, reaching out to people. And you need people who have an interest in forming a play club or play committee. Everybody brings something to the table.

We've had so many instructors offer their activities, martial arts or aerobics or whatever. Probably the biggest one that stands out is a couple who agreed to offer laughing yoga.

In 2009, our state senator offered to lead a game of "Simon Says." We thought that would be a great way to end the day. The woman running for mayor in 2015 offered to run "Red Light, Green Light." She's our mayor now. Over the years I've gone to the city council to ask for more funding. I've also personally invited the council people to Play Days. I invite them to participate, which a lot do. Everybody's welcome. If you strive to reach out to everybody, you're going to make it inclusive.

Ellen Ryan is a Maryland-based freelance writer and editor. She has written for AARP the Magazine and for The Washingtonian, where she served as the monthly magazine's managing editor.

Listen to the TED Radio Hour podcast from NPR