It's common for towns and cities to rally in support of the hometown pro sports team. But community bonding can be found in nontraditional sports as well. The games featured here are easy to learn, are growing in popularity and are physically feasible for people of all ages. 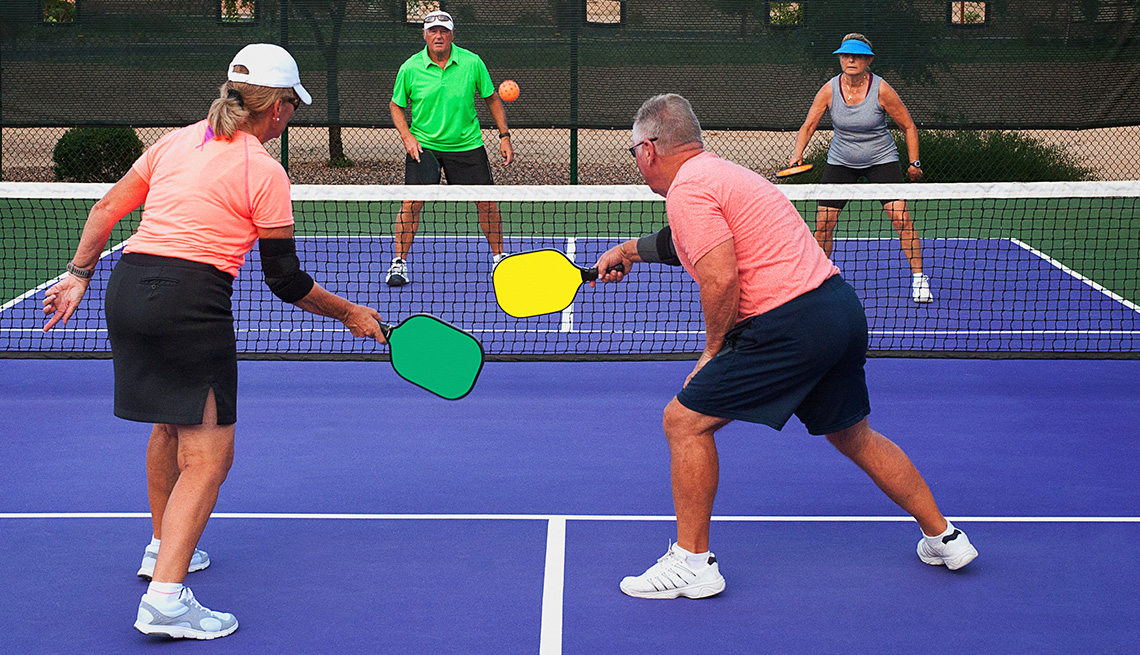 Pickleball is kind of like tennis, pingpong, paddleball and badminton. (It has nothing to do with pickles.)

Pickleball was invented in 1965 on Bainbridge Island, Washington state, by parents seeking a game the whole family could play. The game spread until reaching all 50 states by 1990, and the number of pickleball courts has more than doubled since 2013, reaching 3,500. Players like the lighter physical impact of having a smaller court and using a paddle versus a racquet.

Pickleball combines elements of badminton, paddleball, pingpong and tennis and is played with paddles and a plastic ball either indoors or out. About 2.5 million people play pickleball, according to the Sports & Fitness Industry Association.

In some communities, pickleball is literally muscling into locations once commanded by tennis. For instance, in 2015, Scottsdale, Arizona, converted several public tennis courts into eight dedicated pickleball courts, which are lighted and available for use from sunrise to 10:30 p.m. daily on a first-come first-served basis. A large and enthusiastic group of players ranging in age from their 20s to their 80s use social media to connect and organize games in the city's Cholla Park.

Fun Fact: There is no connection between pickleball and pickles. According to an article by Joan Pritchard, the matriarch of the game's founding family, the name derived from her saying that the game reminded her "of the Pickle Boat in crew where oarsmen were chosen from the leftovers of other boats." 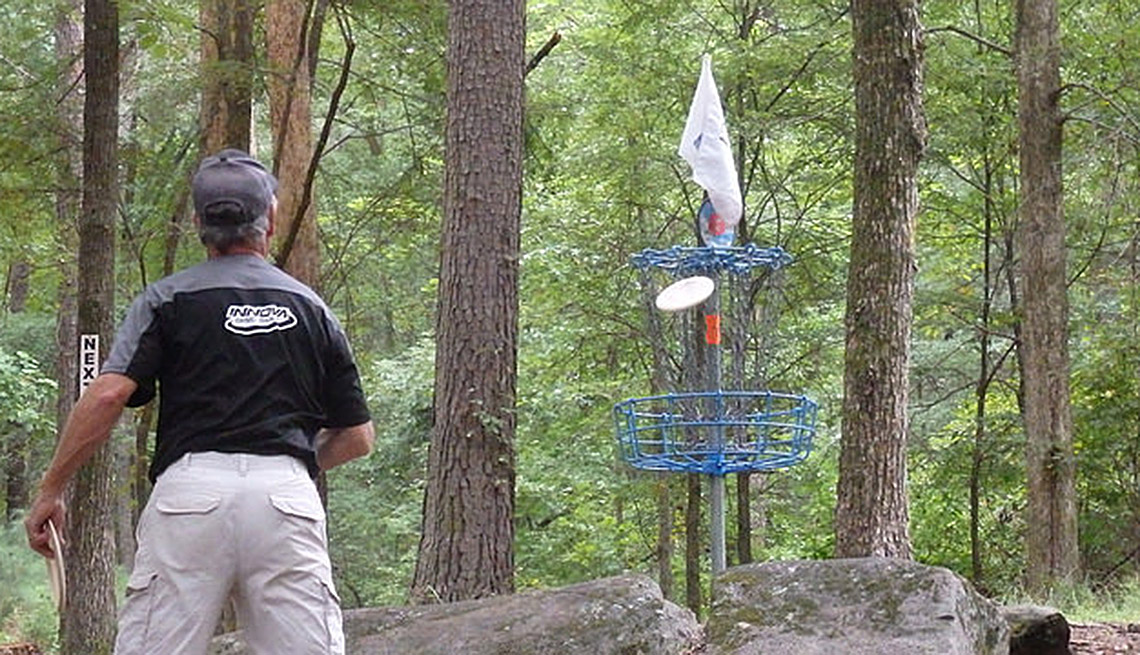 Have you ever been in a park and seen a metal basket on a pole, with chains hanging down from a circular ring? That's part of a disc golf course.

The Professional Disc Golf Association has seen the number of active members nearly double from about 14,500 in 2010 to more than 30,000 in 2015. All ages of people play, with designated brackets for Masters (people age 40-plus) and Grandmasters (age 50-plus). There are far more people in the U.S. playing on a casual basis who aren’t counted in the numbers.

"Most people aren't tournament players," says Matt Gregoire of the Professional Disc Golf Association. "They just want to play with their buddies. Almost every city or town has some kind of disc golf club. Players have a common bond: 'I want to throw this thing at that thing.' It's an immediate friendship."

Edward "Steady Ed" Headrick invented the game in the mid-1970s, just a couple of decades after he invented the Frisbee while an executive at the toymaker Wham-O. In disc golf, a player throws a Frisbee (or disc) to land it in a basket, completing one hole in a course that could have eight or 16 holes.

Most holes are par 3, although some championship courses have longer holes, par 4 or 5. The variety of courses, from wooded to open or narrow, provides interest and a challenge to players. Unlike traditional golf, which requires expensive golf clubs and greens fees, disc golf is inexpensive to play. There are 5,500 disc golf courses worldwide, of which 4,300 are in the U.S. (Finland, with about 500 courses, places  second for the number of disc golf venues.)

The most diehard players own dozens or even hundreds of discs, each with different flying properties. A "driver" is typically thin, similar to a discus, so it flies farther. A "putter" has a wide, rounded rim so it travels a shorter distance more slowly. Some discs bank right, some turn left, others fly straight. 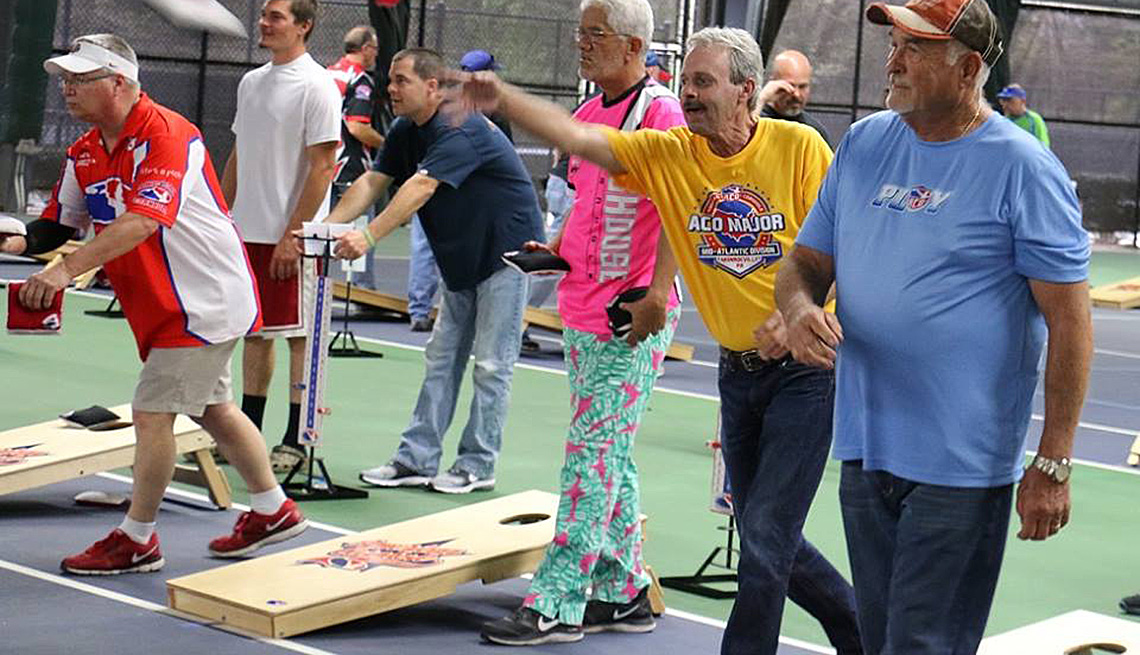 Cornhole leagues and clubs, which are often sponsored by a local bar or veterans' hall, have taken off in the last five years. In 2015, ESPN even broadcast the Cornhole World Championships for the first time. The American Cornhole Organization runs separate divisions for singles, doubles, seniors, women and juniors.

"Whether you're 8 years old or 80 years old people are able to play. It's a very social game," says Frank Geers, founder of American Cornhole Organization, the company that organizes cornhall tournaments including the world championships.

Gather bean bags and a pair of slightly raised boards with a hole in each, and you’ve got yourself a cornhole set. The simplicity of the game is part of the attraction, making it a natural for backyard barbeques and tailgates.

In a game two boards are placed opposite one another, 27 feet apart. Two competing players stand together behind the same board and take turns pitching each of their four bean bags into the hole of the opposite board. Then, they walk to that board, retrieve the bean bags, and pitch them back into the other board's hole. Bags that go into the hole count for three points and those that rest on the platform are worth one point. A game goes to 21 points.

While some say cornhole was invented in 14th century Germany, its modern incarnation began in the Midwest, with Cincinnati being a notable center of popularity. As Midwestern kids brought the game with them to colleges across the country, and some cruise lines began including cornhole setups on their ships, the game took off. 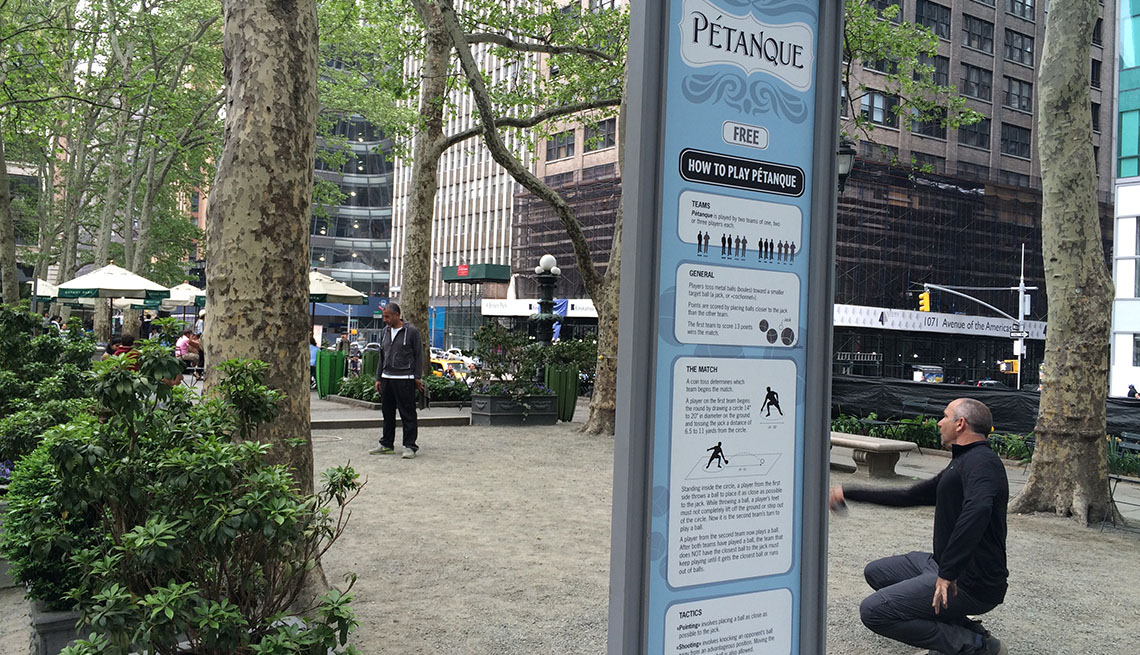 New York City's Bryant Park is full of games (including pétanque) for people of all ages.

Whether called bocce, petanca or pétanque, outdoor bowling games are pretty much the same. They're seen at the annual Smith Street festival in Brooklyn, which occurs every Bastille Day. Zaragoza, Spain, transformed its abandoned plots with petanca courts for nearby older communities.

In 2013, the town of Dennis, Massachusetts, installed bocce courts that are enjoyed today by children and very-senior citizens. Don Robitaille, chair of the Dennis Port Revitalization Committee, organizes open bocce every Tuesday and Thursday morning between April and October.

Players compete to land a large ball closer than their opponents' ball to a smaller ball called the pallino. People can play in teams or solo. Once all of the balls have been played, the winning player or team gets one point for every ball that's closer to the pallino than their opponent's. The first to reach 12 points wins.

Learn More: A History of Bowling, Boules and Bocce in Parks

Residents of a Virginia-based memory care community participate in a drum circle organized by The Beat Goes On, a music program designed to assist people with dementia.

In Takoma Park, Maryland, Katy Gaughan facilitates a monthly drum jam for the community, after which the group eats, drinks and chats together at a local pub. The circle has included infants and 85-year-olds alike, as well as retirees and adults with special needs. Similarly, The Beat Goes On, a Virginia-based "rhythm enrichment" organization brings drum circles to older people with dementia.

"We are rhythmic beings. One of the first experiences we have in our womb is our mother's heartbeat. It's something so basic to us and it's accessible," Gaughan says. "It's really easy and it’s really deep and powerful at the same time."

Anyone who can raise a hand to strike a drum skin or rattle a bell can participate in this cardio experience. The drumming is done as a physical, emotional and social experience, not as a performance.