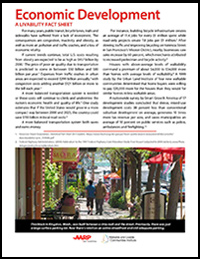 Download the Economic Development fact sheet to learn about the economic benefits of livable communities.

If public transit and community walkabilty continue to take a back seat to vehicle-only transportation systems, total U.S. costs resulting from obesity may be as high as $957 billion by 2030.

The price of poor air quality due to transportation-generated pollution is predicted to come in between $50 billion and $80 billion per year.

Expenses from traffic crashes in urban areas are expected to exceed $299 billion annually, with congestion costs adding another $121 billion or more to the bill each year.

A more balanced transportation system is needed or these costs will continue to climb and undermine the nation’s economic health and quality of life, say various experts and research studies. The good news: Beneficial changes can be made and the investment in them will almost surely pay off.

Among the economic benefits of livable communities as cited in the fact sheet:

Among the places where smart growth and livability-oriented development efforts have paid off:

The Economic Development fact sheet can be used by policy makers, transportation planners, community leaders and citizen activists to educate themselves and others (such as investors, business owners and developers) about the financial benefits of creating walkable, bike-friendly, livable and lively and downtown communities.