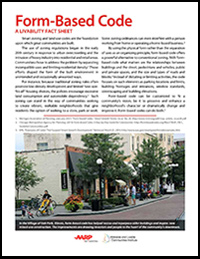 Download the Form-Based Code fact sheet to learn why form-based code, rather than traditional zoning, is a smarter way to develop communities.

The use of zoning regulations began in the early 20th century in response to urban overcrowding and the intrusion of heavy industry into residential and retail areas.

Communities chose to address the problem by separating incompatible uses and limiting residential density. That's why we now have commercial and office buildings in one part of town, houses in another, retail and restaurants in a specific area and a lot of high-speed (though often congested) vehicle roadways as the sole way for people to travel from one location to another.

Such zoning can stand in the way of communities seeking to create vibrant, walkable neighborhoods that give residents the option of walking to a store, park or work. Some zoning ordinances can even interfere with a person working from home or operating a home-based business.

The Form-Based Code fact sheet can be used by policy makers, urban planners, transportation planners, land use officials, community leaders and citizen activists to educate themselves and others about how to smartly plan, build and update a community's map and zoning standards.