From the street, the house looks like a single-family home. Inside, it's two homes in one.

FREE AARP PUBLICATION! Learn how to download or order The ABCs of ADUS

Perlman's win was for "designing a multigenerational hub that flexes as needs change." That "hub" is a house, called the "NextGen" home, which the building company Lennar is selling in more than a dozen states, including Arizona and Nevada, where Perlman Architects is based. From the street, the nearly 3,000-square-foot house appears to be a single-family home. Inside, it's a house that enables multiple generations to live together or just a doorway apart.

The following commentary by Howard Perlman is adapted from his acceptance speech at HIVE. 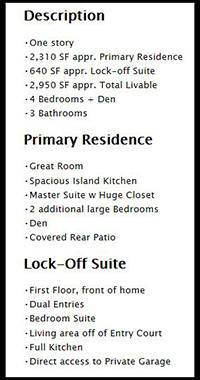 "This award means a lot to me because it's not just about another pretty house. It's about people and how we can help them live more meaningful lives — together.

"Families will live in the houses we're building today long after we're gone, 100, 200, 300 years from now. Kids will grow up in them. People will grow old in them. It's our job, as architects and builders, to give them the healthiest possible environment for their happiness and success.

"We have to think beyond the nuclear family, which has traditionally been defined as a mother and father with 2.2 children and a shaggy dog. In 1960, it made sense to design all of our homes for this family because, in 1960, that mom, dad, 2.2 kids and dog made up almost half of the households in the United States.

"But today those families make up barely 19 percent of our households.

"Other differences: Today, there's a greater percentage of multigenerational households, and the number of those households is increasing. In 1960, just 9 percent of households were headed by an unmarried parent with children. Today, 34 percent are.

"When these single parents or dual-income couples need help caring for their children, who do they usually call first? Typically, it's their parents  — their children's grandparents. That's just one of the reasons for the rise in multigenerational living over the past 30 years, and it's actually a good thing.

"Studies show that children who grow up having a strong relationship with their grandparents are less apt to get into trouble and more likely to succeed socially, in school, in business and in life.

"This relationship is healthy for the grandparents, too. Playing with grandchildren, helping them with homework, just talking to them keeps older adults feeling useful, sharp and relevant.

"So, understanding all of this, we decided with the design of this home to not only accommodate multigenerational living but also encourage it by creating a new type of house — one with a separate space for grandparents, or boomerang kids or "failure to launch" kids, or nannies, caregivers or even a home office.

"We came up with designs that look, from the outside, like beautiful single-family homes. Inside are actually two complete, wonderfully functioning homes under one roof — each with their own parking and front doors, their own indoor and outdoor living spaces, their own kitchens and washer-dryers.

The kitchen and great room of the primary residence.

"Each residence has everything a home should have. But there's a door in between them that, when left open, allows everyone to live together. When the door is closed, each residence has privacy.

"My firm trademarked the designs, which Lennar branded as "NextGen: A Home Within a Home" and took national. There were obstacles, mainly due to zoning ordinances. When we talked to mayors and local legislators, they loved the idea but said that the zoning in their area would allow only single-family residences. As such, a house couldn't have two main entrances or be metered separately. Since the rules vary from location to location, we've had to deal with each municipality individually.

The kitchen and living area of the secondary residence, or "lock-off suite."

"Construction of NextGen homes began in Arizona in 2011, in the middle of the recession. Yet, the homes sold when nothing was selling, and they're still selling today. That first design has evolved into several other NextGen homes.

"Since we can't predict the future of the technology side of homebuilding, all we can and should do is plan for it with fiber optics and conduit to every room. But we do know about humans and what they need.

"Communications technology like Facetime and Skype are great, but people need real, physical connections to one another — and to their environment.

"People need a home they can share comfortably with those who matter most to them. And they need amenities besides parks that they can walk to, such as community vegetable gardens, stores, houses of worship, restaurants, activities and health care services.

"I'm thankful to many people, but I'm especially grateful to my parents and grandparents, who raised me and my sister in a multigenerational home and taught us that making the world a better place is what we're all here for."