Make a New Year’s resolution to become a safer driver and you may save on auto insurance! Here's how.

Early in 2015, an older gentleman in Bowdoinham, Maine, asked the town's coordinator of older adult services where he could buy a jar opener similar to the one he remembered his mother using.

Arthritis was making it difficult for him to open jars and cans. Looking for the right opener, he searched department stores, hardware stores, drug stores and cooking shops without success.

Trying to help, the coordinator Googled "jar openers" on her computer, read the information and reviews about several of them and then ordered three styles of jar openers. After the packages arrived, the man took the openers home to test and report back about which opener worked best for him.

Inspired by the inquiry, members of Bowhoindon's Advisory Committee on Aging (ACOA) — which consists of seven community members appointed by the town's leadership — had started to look for simple devices (medication boxes, no-tie shoelaces, strobe-light doorbells and smoke detectors) that could be helpful to the town's older residents. Those residents were also asked to identify problems in need of solutions and recommend products they had found useful.

Volunteers in Bowdoinham, Maine, pose with the "handy tools" display and a copy of the very handy AARP HomeFit Guide. 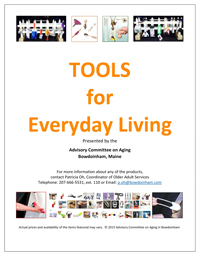 What: An Educational "Tool Table" Display

Located about 30 miles northeast of Portland, Maine, Bowdoinham (population 2,889) is a rural community where the median age is 41.8 and about 20 percent of the citizenry is 60 or older. Bowdoinham is a member of the AARP Network of Age-Friendly Communities.

By displaying household, personal care and automobile-specific items that can be especially helpful for older adults, people can learn about useful tools, try different devices and decide what to buy.

The town's "Tool Table" planning began in February 2015, and the collected tools were displayed in June at an open house hosted by the Bowdoinham Public Library and Bowdoinham Historical Society. At the event the tools were displayed on two 8-foot-long conference tables. It became quickly obvious that a more space-efficient display was needed. Four volunteers accepted the design challenge. Before summer's end the chosen display unit for showcasing the tools took up semipermanent residence at the Bowdoinham Town Office.

Bowdoinham's Advisory Committee on Aging presented the tool table idea to the town's Select Board, which is a group of five elected representatives who serve as a town council. The board's chair, who happens to be a retired vice president of the disability insurance provider UNUM, arranged for a visit with the company's rehabilitation specialists to brainstorm and gather ideas. UNUM agreed to provide ongoing technical assistance with the project and connected ACOA with funding sources, which were needed for purchasing tools.

Based on conversations with UNUM as well as with community members, ACOA created a seven-page printed catalog (right) that describes more than 30 tools, lists the prices and where and how to buy each item. Since many of Bowdoinham's older residents do not use the Internet, prefer to use cash rather than credit cards and/or want to shop locally, ACOA made arrangements with the owner of Bowdoinham Hardware  to keep the catalog in the store and place orders for customers seeking the nonmedical items.

Since ACOA needed to figure out a way to display the more than 30 tools it had gathered, community volunteers with a background in design and construction were recruited for the task. The display's design needed to be:

A length of picket fence with cup hooks attached to the pickets (1), the painted base (2) and the fence display in the base (3).

1. The display surface chosen for Bowdoinham’s tool table is a 5-foot-long table that is built of a lightweight composite and has folding legs.

2. The central display consists of two 3-foot -ong by 18-inch-high sections of picket fencing. Each was painted white and fit with 12 to 18 cup hooks that are used to hang the tools and are arranged according to the size of the tools that will be displayed. (Image 1)

3. A one-foot base to hold the picket fence piece(s) upright was crafted from a 4 x 4 x 12-inch block of wood. A dado saw was used to make two grooves on the opposite ends of the same side of each block. After cutting and sanding the base piece, it was painted green. (Images 2 and 3)

4. In addition to the picket fence sections, each end of the table features a square wooden frame that's made with four pieces of 1-inch-thick board that is approximately 6 inches wide and 18 inches long.

A wooden frame for displaying a grab bar (4) and a tools display using two sections of picket fence, one in front of the other (5).

For building and placing a single 3-foot-long display:

The most difficult part of building the display involves crafting the base. For that step, a drill and a table saw with a dado blade set and dado cutter insert are needed. Another option is to use a chisel to make the grooves and a hand saw to cut the boards.

For stocking the display, consider using some or all of these items (which you can learn more about by downloading Bowdoinham's "Tools for Everyday Living" guide).

Displaying tools on the picket fence sections keeps the tools organized and allows easy access for reaching and trying the devices even if a person is a wheelchair user or very short. 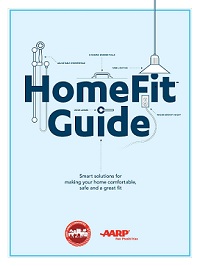 Counting the materials needed to build the display, the table and the displayed items themselves, the cost comes to about $575. If the building materials and the table are donated or gathered from scrap, deduct about $125 from the total cost.

How The Tool Table Is Being Used

Bowdoinham’s tool table is semipermanently on display in the Bowdoinham Town Office in an 8-foot x 8-foot space that allows residents to try the devices whenever the town office is open. The display was designed to be portable, and it has traveled to Bowdoinham’s Annual Aging Well(ness) Fair and Celebrate Bowdoinham. ACOA has also shared the tool table with neighboring communities.

The Benefits And Outcomes

The Advisory Committee on Aging's three-year action plan includes objectives for housing services that support aging in place. An aspect of the plan is to make affordable home modification information and services available. The tool table display is an inexpensive way to educate people about devices that can help them adapt to the physical changes that come with age.

In addition to displaying the tools, the tool table holds copies of the AARP HomeFit Guide and the No-Cost/Low-Cost Ideas brochure. Both have helped visitors think about affordable home modifications.

Although it wasn't an initial goal of the project, the tool table display in Bowdoinham has attracted people of all ages — including young mothers looking for a way to do things single-handedly, shoppers buying gifts for relatives, middle-aged people wanting to simplify their lives and older adults in need of devices to help them adapt to age-related changes.

Says Patricia Oh, Bowdoinham's older adults service coordinator: "Everyone, of every age, is happier when they have the tools to make life easier."