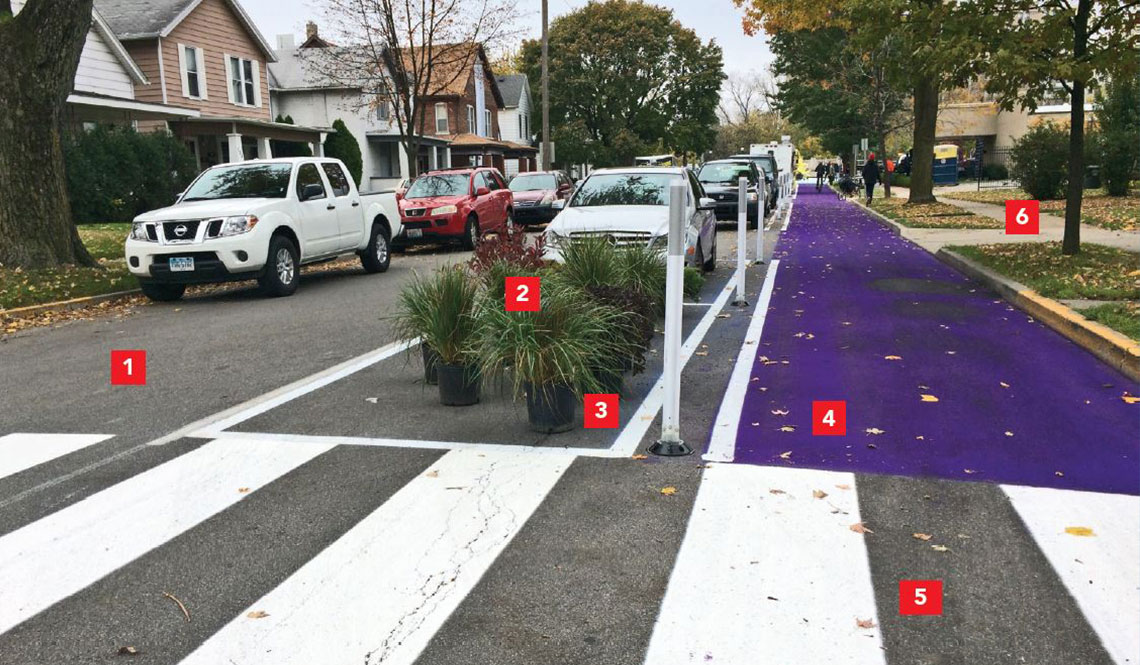 This residential street’s "Complete Street" makeover included a one-way roadway with on-street curb parking (1). A landscaped bed, represented by potted plants (2), serves as a “swale,” or pervious surface for capturing storm water. A floating parking lane (3) located away from the curb becomes a safety buffer for a “limitless lane” (4), which is wider and slower than a traditional bike lane and is created for the shared use of bicyclists, people in wheelchairs, joggers and others. Pedestrians are provided a very visible crosswalk (5) and an existing sidewalk (6) is safely away from the vehicle and bicycling lanes.

A Complete Street is usable by all roadway users, whether they’re driving, riding, walking or bicycling. Since not every street can or should be “complete,” such policies simply call for the needs of all users of all ages to be considered and, when appropriate, to be met.

Until the 20th century, city streets and rural roadways were made for people. People walked in the street. If they rode, it was on a horse or maybe a bicycle or inside a carriage. Once automobiles arrived en masse, motor vehicles of all types essentially drove over the people, horses and buggies.

Speed and efficiency became the point of transportation planning. When congestion slowed traffic, roads were widened, traffic signals and stop signs were removed, crosswalks faded away. In many places, being able to safely cross a street on foot or by bicycle is the exception rather than the rule.

During a demonstration event in Fort Wayne, Indiana (see the related article "How to Build a Better Block"), the urban planners of Team Better Block completed an existing street.

As seen above, plants, poles and paint turned a local roadway into a safer, shareable, more sensible street. Within just a few hours, a street created for cars was transformed into a Complete Street for all users of all ages.

This article is an excerpt from the "Provide More Ways to Get Around" chapter of the AARP book Where We Live: Communities for All Ages — 100+ Inspiring Examples From America’s Community Leaders. Download or order your free copy.