Read about where and how The Vision Zero Initiative is looking to end all pedestrian deaths.

1. Reduce the Number of Travel Lanes

Downsizing four-lane roadways to two travel lanes with an alternating turn lane in the middle has become a popular trend across the country. When this "road diet" approach was used on a stretch of Edgewater Boulevard in Orlando, crashes declined 34 percent and injuries 68 percent, while drivers' travel times actually decreased. This explains why the Federal Highway Administration (FHWA) designates road diets as among the Proven Safety Countermeasures it suggests traffic engineers use to reduce collisions at intersections.

2. Reduce the Width of Travel Lanes

3. Reduce the Crossing Distance at Intersections

A shorter walk across the street is a safer one. Extending the sidewalk out a few feet into the intersection improves safety for all road users by making pedestrians more visible and slowing the speed of turning traffic.

Mark them with bright swaths of paint or, better yet, elevate them to curb level, which is a technique that has worked in places as varied as downtown San Francisco to rural Harrisonburg, Virginia.

5. Add Medians or Pedestrian Islands in the Middle of Busy Streets

Medians and islands that provide a refuge for people crossing the street have been shown to reduce traffic accidents by 46 percent. The Federal Highway Administration deems this one of its nine Proven Safety Countermeasures. 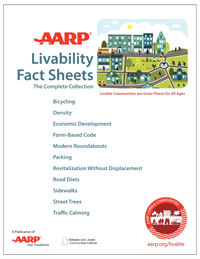 Learn how to make streets safer. Download one, a few or all 11 AARP Livability Fact Sheets.

6. Give Pedestrians a Head Start at Traffic Lights

A three- to seven-second head start allows pedestrians to enter the crosswalk first, making them more visible to motorists. This results in up to 60 percent fewer pedestrian-vehicle collisions, according to the National Association of City Transportation Officials.

Drivers, stopped at the red light and busy watching out for other cars, often don’t see people crossing the street on green lights. Best option: Prohibit them at high-traffic intersections and streets. For instance, right turns on red are not allowed in New York City.

It's expensive to station a police car at every unsafe intersection, but cameras can nab lawbreakers who speed, run red lights or don’t yield to people walking. More than 550 communities from Sacramento to Charlotte now use red light cameras.

Killing or injuring people with a car is no less tragic than doing it with a weapon. Seattle won top honors as a Walk Friendly Community, in part, for its Aggressive Driver Response Team where neighborhoods work with police to curb dangerous drivers.

"These pedestrian improvements typically improve motorists' and bicyclists' safety," says Charlie Zegeer, director of the Pedestrian and Bicycle Information Center at the University of North Carolina. "It's a win-win-win. Everyone's safer."

Giving up the car