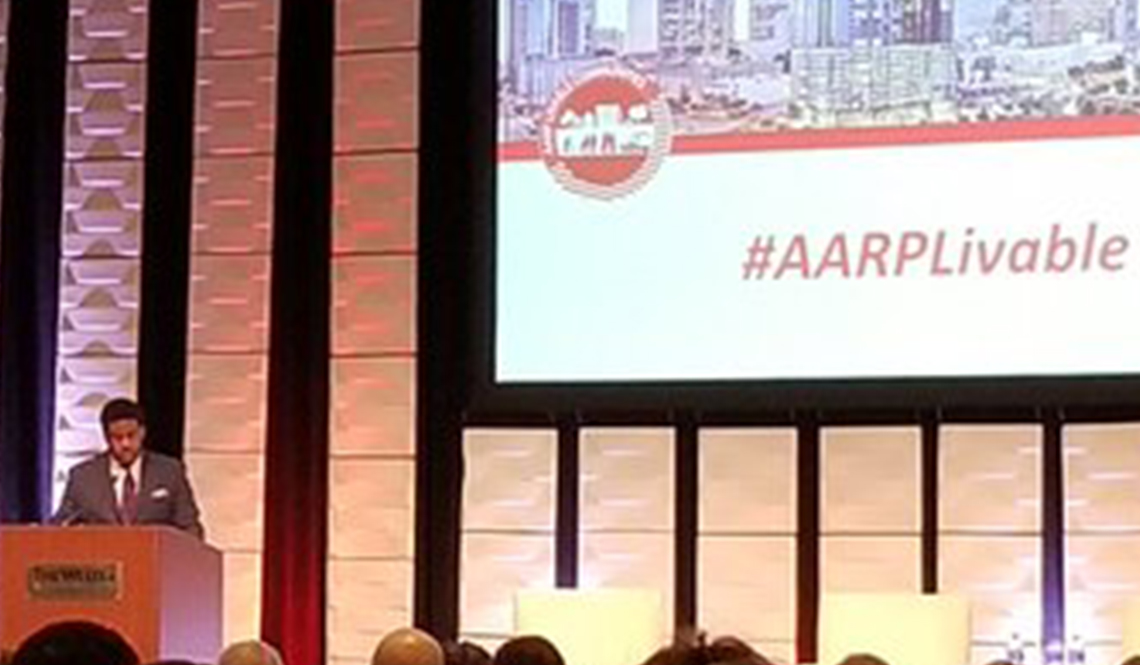 Keith Benjamin on stage at the 2018 AARP Livable Communities National Conference in Charlotte, North Carolina. (Learn more about Benjamin's work and career by reading his biography at the bottom of this page.)

"We have a history of transportation being unapologetically used as a tool to exacerbate inequity and create a greater distance between opportunity and access.” — Keith Benjamin

At the start of his keynote address to AARP staff, volunteers, local leaders and community partners, Keith Benjamin, the director of traffic and transportation for the City of Charleston, South Carolina, asks his audience a question.

“How many system changers do we have in here today?"

At first, conference participants look at one another, somewhat confused, but as each thinks through the meaning of the question, hands began to rise.

Another question: “How many people do we have who believe they are part of disrupting the norm?”

“A system is defined as an interdependent group of agents working together as a whole," Benjamin explains, quoting the Kirwin Institute for the Study of Race and Ethnicity at The Ohio State University. In a system, "equity and inequity are constantly battling for position" but, since "systems are controlled by people, systems can be changed."

Many if not most systems have histories that, Benjamin notes, "were purposeful in its promotion of inequities. Those inequities need to be acknowledged."

(Article continues beneath the video.)

The video of Keith Benjamin's presentation runs for about 30 minutes followed by a 15 minute question-and-answer period.

As an example of historic inequities, Benjamin describes visiting the Baltimore, Maryland, neighborhood that had been the home of Freddie Gray, a young black man who died from a neck injury suffered while in police custody in 2015.

During his visit, Benjamin came upon an eight-year-old girl doing chalk drawings on a sidewalk as part of a community art program. The child’s art depicted the outlines of three fallen bodies representing Gray, Michael Brown (a black teenager killed by police in Ferguson, Missouri, in 2014) and Trayvon Martin (a black teenager killed in Sanford, Florida, by a community watch volunteer in 2012).

"Equity is an intentional elimination of disparities disproportionally impacting marginalized people in a community."

“What caught me off guard was that at eight-years-old, when asked to describe community, the only thing that could come to her mind was death,” Benjamin shared. “She already saw herself as disposable.”

The experience inspired Benjamin to learn more about the neighborhood. He discovered that in the 1940s, the City of Baltimore had — on the advice of Robert Moses, the infamously powerful New York City parks and planning commissioner — razed much of the housing and businesses in the community in order to build a freeway.

“From 1951 to 1971, 80 to 90 percent of the people who were displaced — 25,000 families from Baltimore in that time frame — were African-American," Benjamin explains. The surviving neighborhoods near the roadway became isolated, with no connections to the city’s center of commerce, transportation and jobs.

Back in Charleston, Benjamin and other city officials are enjoying — yet also struggling to address — the coastal city’s economic success and rapid population growth from major corporations relocating to the area. Charleston, Benjamin reminds the audience, was the nation’s slave trade capital.

“Over 40 percent of African slaves reached the British colonies before the American Revolution and passed through our ports, the same ports where we now have every X-series BMW go through," he says. "We were the capital of despair and it has had reverberating effects today.” One example: much of Charleston’s lower-income population is dependent on public transit to get around yet, says Benjamin, less than 10 percent of the 849 bus stops in the region have a shelter or a bench.

Near the end of his presentation, Benjamin provided the audience with several questions to ask themselves.

1. What is missing from your definition of "for all"?

2. Who is not in the room from your community that needs to be part of this conversation?

3. Have you institutionalized equity at your organization or have you just hired/partnered with it?

4. Who do you need to welcome in that you've been holding back because of the accountability you will then be responsible for?

5. Where do you see opportunities to co-empower a community leader or advocacy partner to lead?

In many communities, including in Charleston, not having a car is a barrier to financial stability and success, he emphasizes, adding that the availability of public transit, speeds limits, street sizes, and even whether a street runs in one direction or two are among the ways transportation planning and engineering can embolden inequities.

“Equity is an intentional elimination of disparities disproportionally impacting marginalized people in a community," says Benjamin. "It’s joining together to take proactive steps and embracing the complexities of experience, elevating the potency of inclusion, exposing the creativity in every community — demanding honesty in our calling out of racism and oppression both overt and systematic — and striving to empower its citizens to implement goals."

"Equity is achieved when no one is blocked out from reaching their full potential no matter their race, their gender, their sexual orientation, their disability, their economic position or any other social or economic determinant," he continues. "It is imperative that the vision of our work that both you and I do does not perpetuate inequities by treating mobility, livability and safety as optional or inaccessible.”

To change the way forward, Benjamin points out that municipalities and other local governments need to change how they hire staff, sign contracts and determine their scopes of work. Another need is for more people in positions of power and responsibility to mentor younger workers and students in order to build a workforce that can someday keep moving the work forward.

Before leaving the podium, Benjamin again asks his audience a question: “When are you going to jump off the sidelines and really get engaged in the work?"

The only "qualification" for being able to change the system, he explains, is a willingness to be a part of the shift.

"We don’t have time to waste on being thorough and clear in our commitment to the work of livability, to our work of equity, to our work of disrupting the norm," says Benjamin. "We need people who have their heads and their minds focused on acknowledging the mistakes of the past, on finding solutions at the intersections, on graduating from equity just being sprinkles to being a priority in every social structure that we work in, and that we never allow what we don’t have to hold us back from embracing what we can do.”

Keith Benjamin has been the director of traffic and transportation for the City of Charleston, South Carolina, since 2017. In this position, which he assumed at age 29, Benjamin oversees all transportation maintenance, planning and partnerships at the local, county and state level. He is also the city’s representative on the board of the Charleston Area Regional Transit Authority, Charleston Aviation Authority and the Berkeley-Charleston-Dorchester Council of Governments’ Policy Committee.

A 2019 Leadership Fellow of the National Association of City Transportation Officials, Benjamin previously served in the Office of Policy Development, Strategic Planning and Performance and as the head of the Office of Public Liaison at the U.S. Department of Transportation.

A 2018 Next City Vanguard Fellow, Benjamin served as a member of the National League of Cities Advisory Panel on Health Disparities, the Better Bike Share Partnership Equity Panel, the National Working Group on Healthy Food Access with the Food Trust and the National Urban League and the National Capital Region Transportation Planning Board, Citizens Advisory Committee.

He has appeared in and written for publications by the American Journal of Health Promotion, Prevention Institute, Institute of Transportation Engineers, Centers for Disease Control and Prevention and the American Planning Association, as well as The Washington Post, The Root, Streetsblog, Urban Cusp, Huffington Post and Black Enterprise.

Benjamin is a graduate and deans awardee of Swarthmore College.