After living in shelters and on the street, they now have places of their own 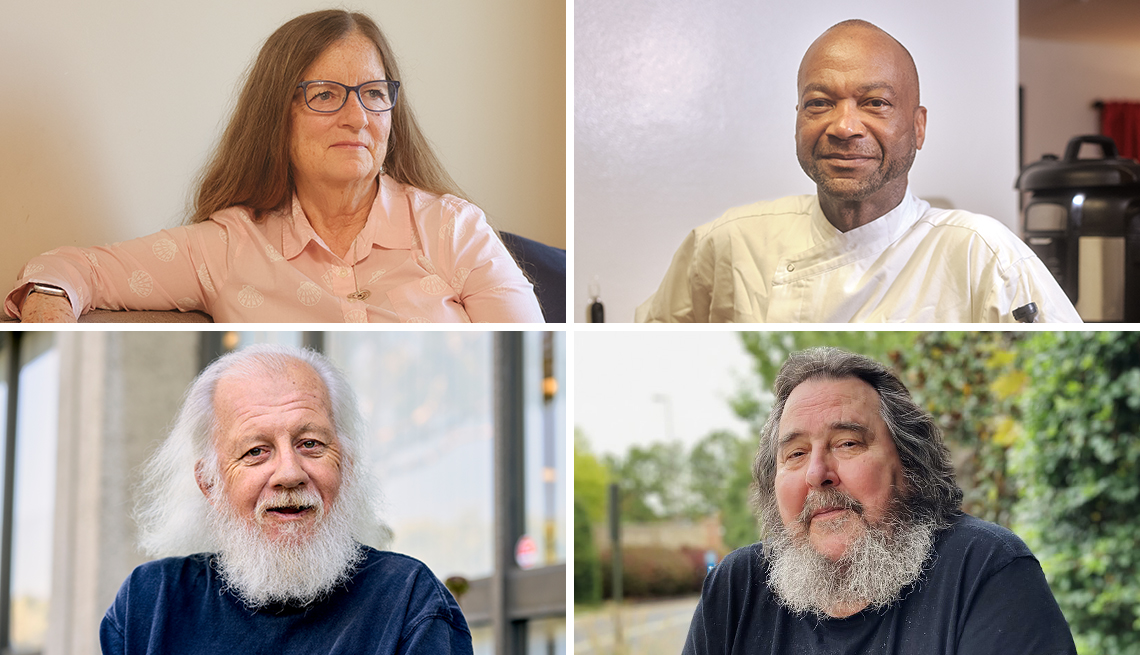 ​Having a place to live — a bed, a bathroom, a kitchen — is something most people take for granted. But the number of older adults who no longer have a permanent residence is rising, and experts worry about the ramifications for their health, for their families and for society. ​

The stories of those facing homelessness are varied and tangled. These four Americans found themselves without a steady place to live after setbacks later in life. But with help from homeless advocates and from a mix of local, state and federal programs, they are living in places that give them security, allowed them to find steady work (if they were able), and let them take care of health problems.

Their stories provide a glimpse into their old lives, and their new ones.​ 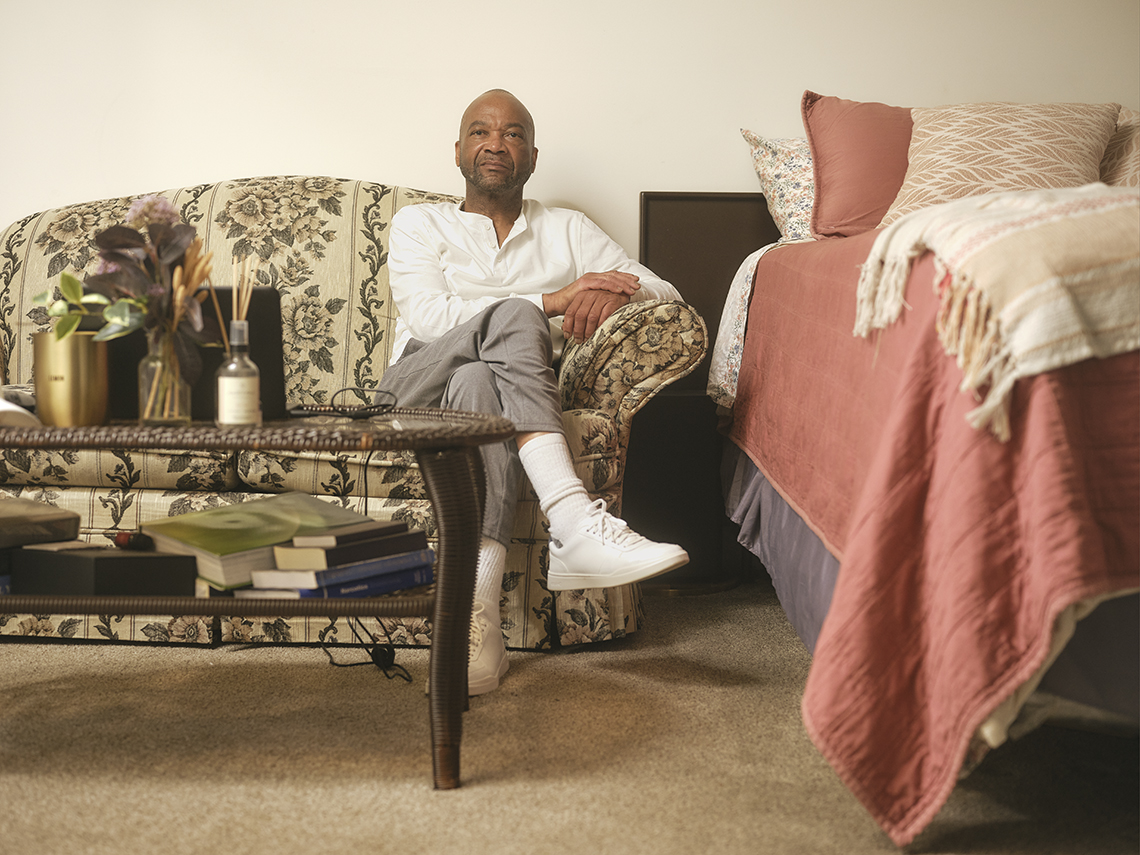 Terrence Hill had a steady job until substance abuse landed him on the streets. He’s now sober.
Jared Soares

From street life to salvation​

Struggling with addiction, Terence Hill became homeless in his early 50s. For three months he lived in his Honda Civic in the Maryland suburbs of Washington, D.C., his belongings piled so high he couldn’t see out the rear window. ​ 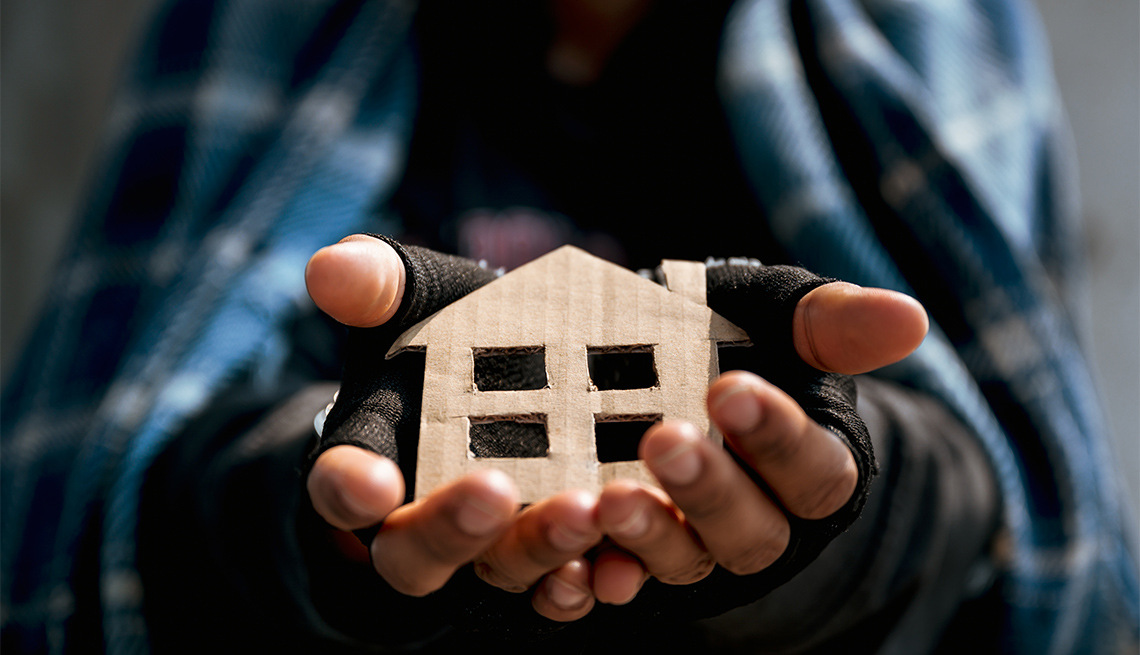 Find out more about th﻿e crisis of the unhoused and how to help: ﻿﻿

“My base camp,” the 59-year-old called his car. At one point, Hill was so broke that he used a nylon stocking for a fan belt. ​

He’d park at McDonald’s to charge his phone, use the Wi-Fi and restroom and hope somebody would buy him a sandwich. At night he huddled under blankets and periodically ran the car’s heat. It was a colossal fall from grace for a chef named the 2016 employee of the year by Washington’s Fairmont Hotel.​

But drinking and drug use took over. Hill lost his apartment, then stayed temporarily with a sister.​

Next﻿, he lived in his car and later he spent years in shelters in the Maryland suburbs. Outside the facilities, his substance abuse persisted. “Drinking day, noon, night, evening,” he remembers. “I mean, it felt normal to be drunk.”​

But man-to-man advice from a counselor propelled Hill toward recovery: Shower daily. Launder your clothes. Polish your résumé. Look for work. Attend Alcoholics Anonymous meetings. Invest in yourself.​

“No, it didn’t happen overnight,” Hill says. “It was like a couple of months, but still, I was committed to rebuild a life.”​

He was treated for substance abuse, depression and post-traumatic stress from his early chaotic years, including time he spent behind bars. He’s been sober since February 2021.

​Now Hill’s one-bedroom apartment in Rockville, Maryland, has a balcony overlooking a pond with a fountain. The kitchen is chock full of cook’s tools and gadgets. At first the unit was subsidized; now he pays the rent from wages as a top chef at a hospital. He also serves on the Montgomery County Interagency Commission on Homelessness, which advises elected officials on policies and services.​

Hill gives back, counseling men who struggle to emerge from the demons that nearly suffocated him. “Even if you fall on your face, turn over and look up,” he tells them. “Try to get up. Tough times don’t last, but tough people do.”​ 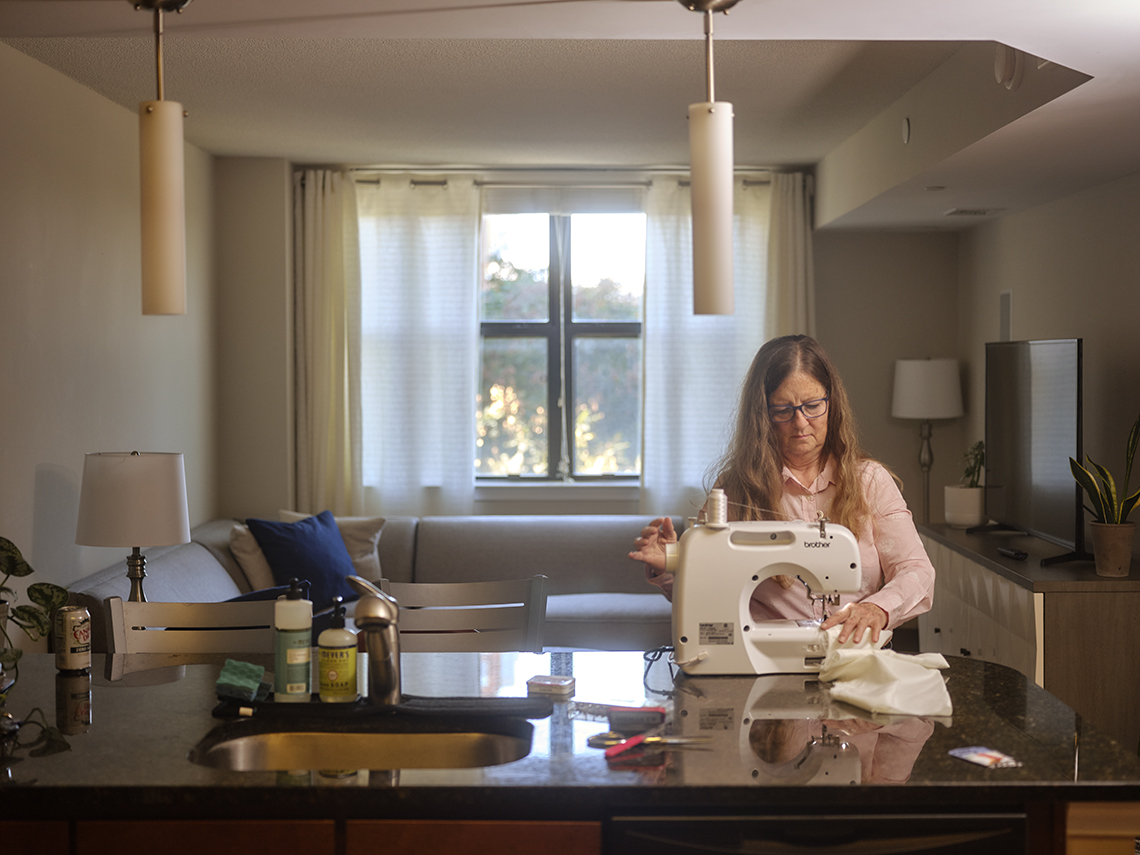 Not a mile away is the homeless shelter where the 67-year-old grandmother once lived.​

Her earlier years didn’t signal the hard times to come. She was an Air Force colonel’s daughter. She was married for 25 years before she and her husband called it quits. She raised three sons, all engineers. And she worked for decades, often waitressing.​

A lifelong epileptic, she was divorced and working at a 7-Eleven as a cashier when she had a grand mal seizure in 2013. Under Virginia law, the driver’s license of a person who has a seizure must be suspended. And, since her doctor said she could no longer work, she couldn't pay her mortgage.

“My life was a shambles in one day,” Montminy says. “The minute I woke up … I knew that I’d lost my house, I would lose my car, I will lose my driver’s license, I will lose what I consider freedom, because any shelter is an institution.”​

She sold her home and stayed with relatives or rented an apartment, including near a sister in Minnesota. Rent, doctor’s bills and other expenses ate up the $25,000 in equity she pulled from the home sale, she says. ​

By 2016, she entered the Arlington shelter, where for six weeks she slept on a “thin piece of foam rubber” until a bed opened up. Nights were restless. “Nobody’s getting good sleep,” she says. “Everybody’s irritable. … Nobody really came to the shelter because life was good.” ​

She says she was bullied and threatened, and once a female resident of the shelter shoved her in the face. She kept her spirits up by taking long walks, sewing and listening to musi﻿c.​

After nine months in the shelter, she qualified for Permanent Supportive Housing (PSH) benefits through the U.S. Department of Housing and Urban Development, which pays most of her rent in the apartment that has been home for six years. “I feel like I’m a survivor,” she says. “I still think it’s a badge of courage that I made it through and came out on the other side.” ​ 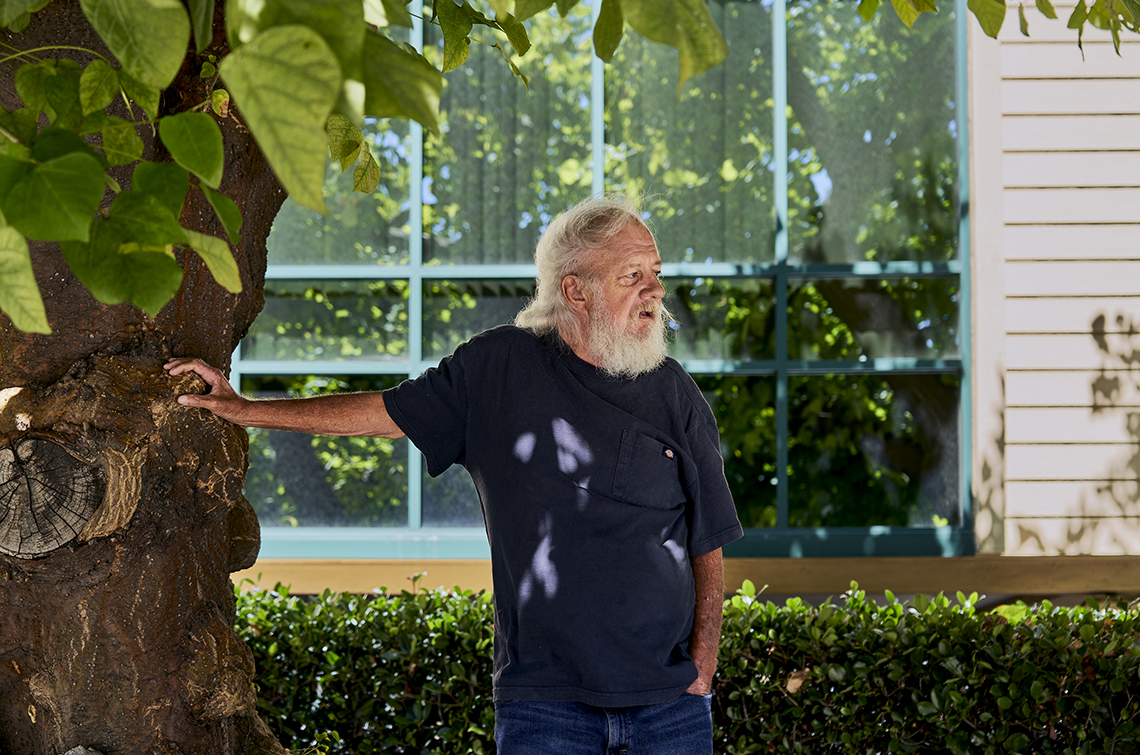 Veteran Greg Spraul now has a studio apartment after being homeless.
Philip Cheung

Veteran tries to put chaos behind​

But a 2019 fire in the San Diego condo building where Spraul lived with his second wife marked a turning point. The couple’s condo was spared from the blaze but became uninhabitable because sprinklers drenched the unit. The two moved in with a brother-in-law but then split up.

​Thus began Spraul’s descent into homelessness. After leaving ﻿a brother-in-law’s home, Spraul lived in Escondido, California, in an Airbnb room costing $950 a month. The rent gobbled up much of his Social Security benefits, and when the rent jumped even higher, he moved into his 1998 Mazda truck.​

Sleeping in his truck, he could only nod off for a few hours at a stretch. Finding a toilet could be tough. A basket of his clothes was stolen. So was his bicycle. ​

Spraul, 72, a Vietnam-era Air Force reservist, occasionally lived in San Diego in budget motel rooms subsidized for veterans. “I’ve been down and depressed, and sat in my room and said, What the hell am I doing?” he recalls. “And I didn’t think about suicide, but I betcha I was getting close to it.”​

He had so little that he relished the sandwiches that Jack in the Box gives to the public on the days after one of the San Diego Padres hits a home run. ​

His health has suffered. In February, Spraul landed in an intensive care unit with shortness of breath, high blood pressure and irritable bowel syndrome. He already had heart problems along with diabetes and neuropathy. Each morning it takes him time to find his footing, and he can’t stand for long periods.​

“I can’t stock shelves at a Target,” says Spraul, who acknowledges that poor financial decisions earlier in life left him without a cushion.​

After leaving the hospital, his fortunes changed thanks to a nonprofit, Brilliant Corners, which helps low-income Californians find places to live and provides support services so they remain housed. Its staff found Spraul a former motel room converted into a studio apartment in Oceanside and is helping him so it’s his home for the long haul. He also receives assistance from a Department of Veterans Affairs program, Supportive Services for Veteran Families. ​

The studio has new floors, a full-size refrigerator and a microwave oven. The Pacific Ocean is 10 minutes away.​

Spraul, his face framed by a white beard and shoulder-length hair, hasn’t shed the fears of the chaotic years past. Fears about his health. About affordable housing. About when he might again see his two granddaughters, who are 16 and 13 and live on the East Coast. “I’m really scared about my future,” he says. “I keep thinking, Should I go buy a Powerball ticket?” 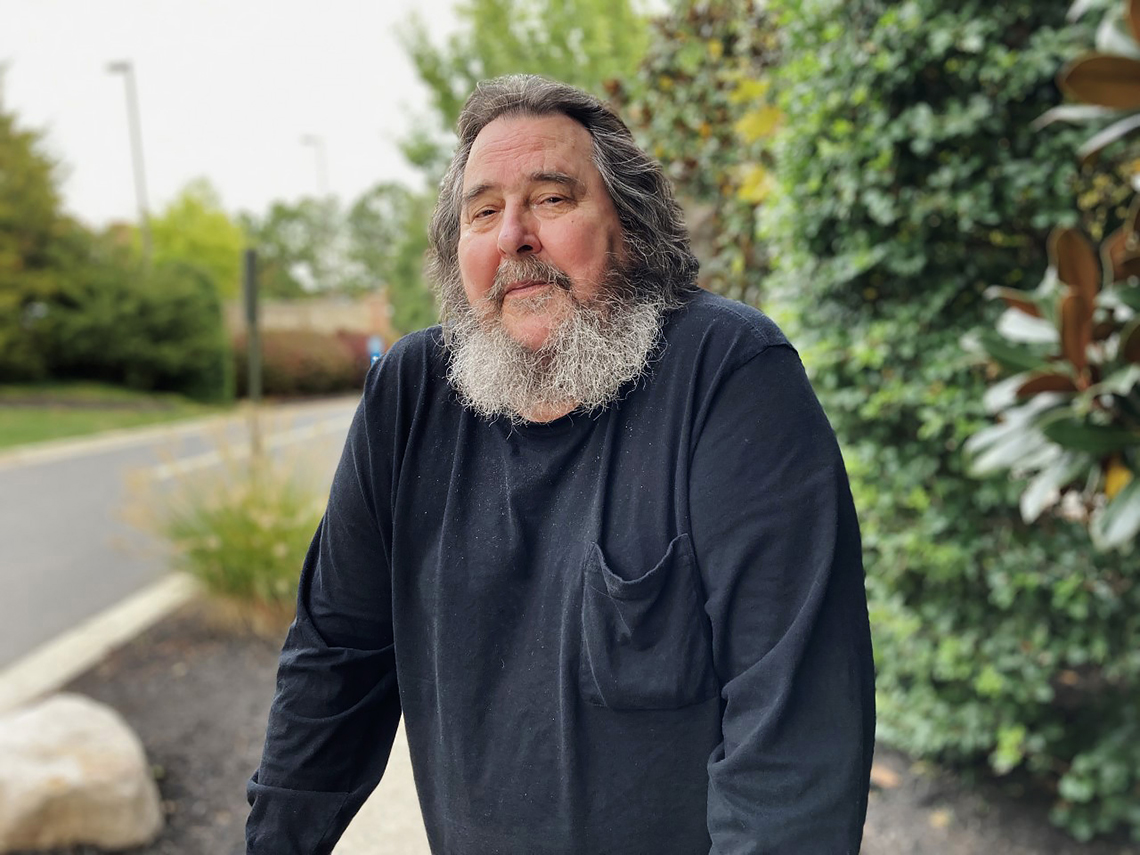 Nicholas Thimmesch once lived in a medical unit at a homeless shelter, but now has an apartment.
Katherine Skiba

In the 1980s, Nicholas Thimmesch was a junior staffer in the Ronald Reagan White House, a credential that became his ticket to jobs on political campaigns and on Capitol Hill. For a time he had a D.C.-area consulting firm, earning a six-figure salary.​

Twice married and divorced, he and his third wife had a daughter when he was 49 years old. At the time he focused on caring for his daughter while his spouse worked. After that marriage crumbled, the competition for jobs was fierce and he says people stopped returning his calls. The Great Recession had torpedoed the job market. ​

Thimmesch was adrift for more than a decade: couch surfing, house-sitting or sleeping in his Honda Accord. He often showered at public pools.​

Sometimes he used loyalty points at budget hotels. For a time he volunteered at a nonprofit and overnighted there even though the air conditioning was turned off after hours. Worse were the months at one suburban homeless shelter after another.​

“The first time you’re in one, you’re just lying there and you wonder, My God, what has happened? I used to be the person who gave people sofas to stay on,” he says. “It was such a reversal. That’s when I stopped connecting with friends and family. I was humiliated.”

​The longtime smoker suffered a stroke in 2018 and the first in a series of heart attacks a year later. He spent weeks in hospitals and later was placed in a medical unit in a homeless shelter. Finally, he moved to a one-bedroom apartment in Arlington. Through a government program offering permanent housing and support services, he pays about $250 monthly for rent.​

Once a critic of social spending, the 69-year-old Thimmesch has shed that view: “This experience has given me humility and made me realize that we do owe it to humanity to at least meet the basic needs — food and shelter — for anyone who needs it.” ﻿﻿ 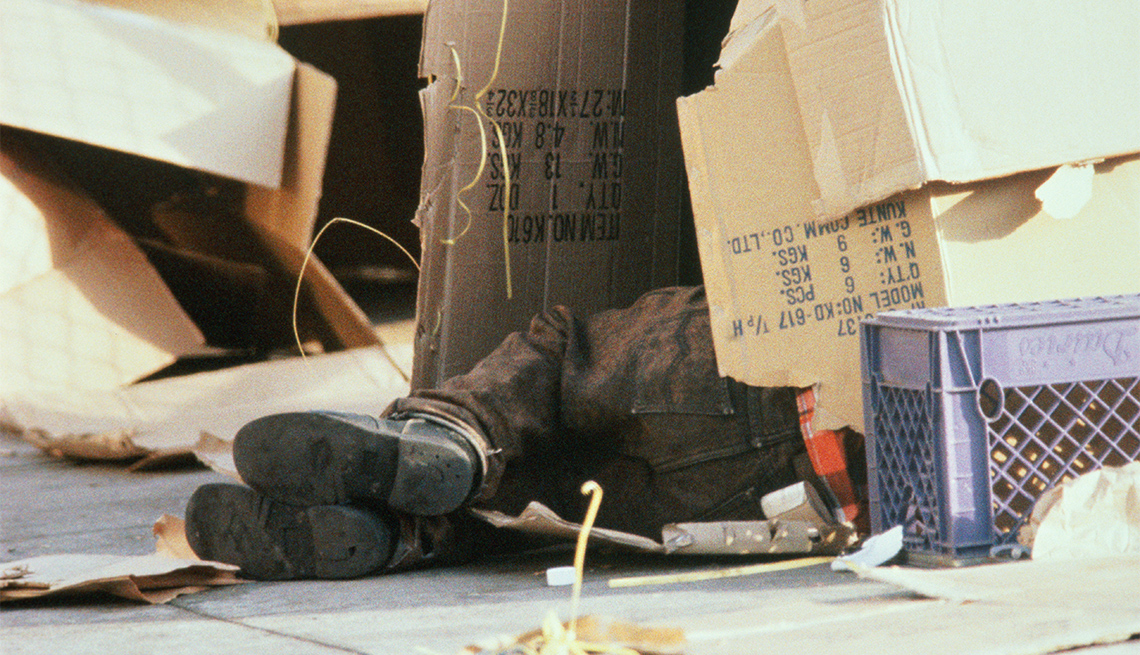 The Graying of America's Homeless: An Alarming Trend

Number of unhoused people 65 and older could triple by 2030​ 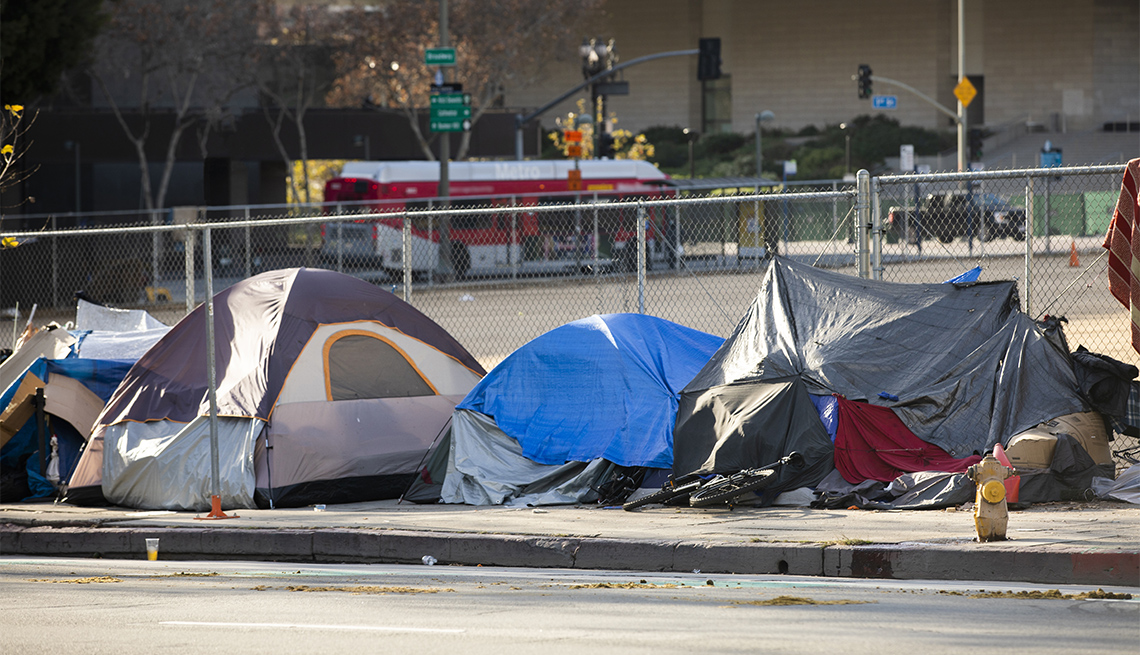 Housing Resources and Help for the Homeless﻿

Find assistance and connect with organizations that provide support 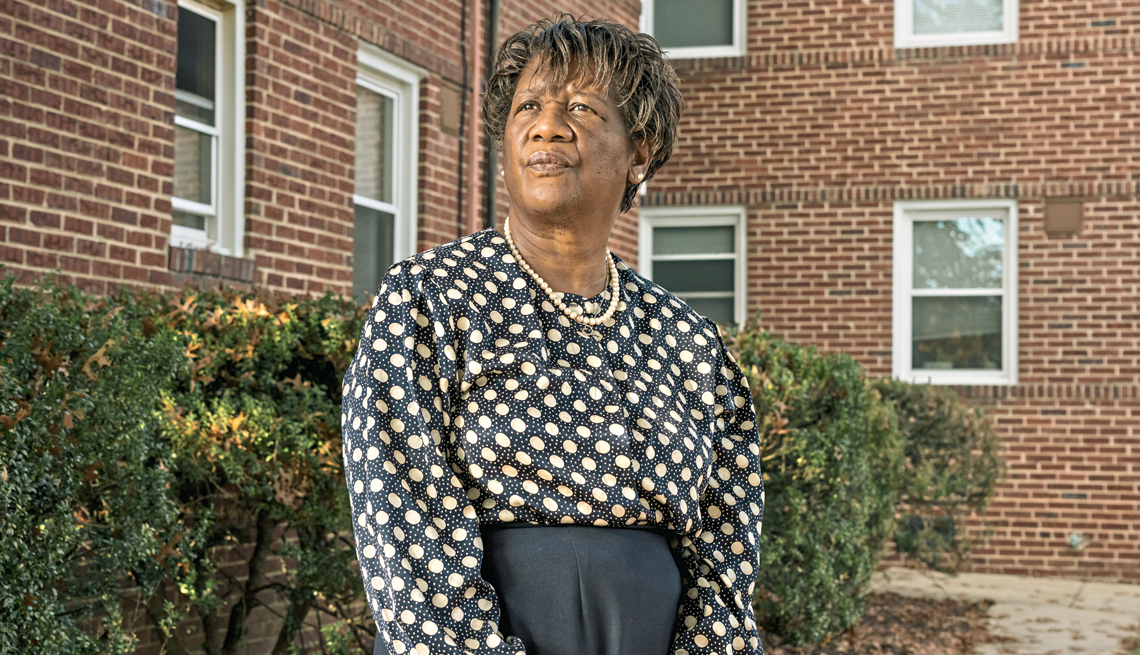 How To Fight Rising Rents

You can fight rent hikes, but it's not easy