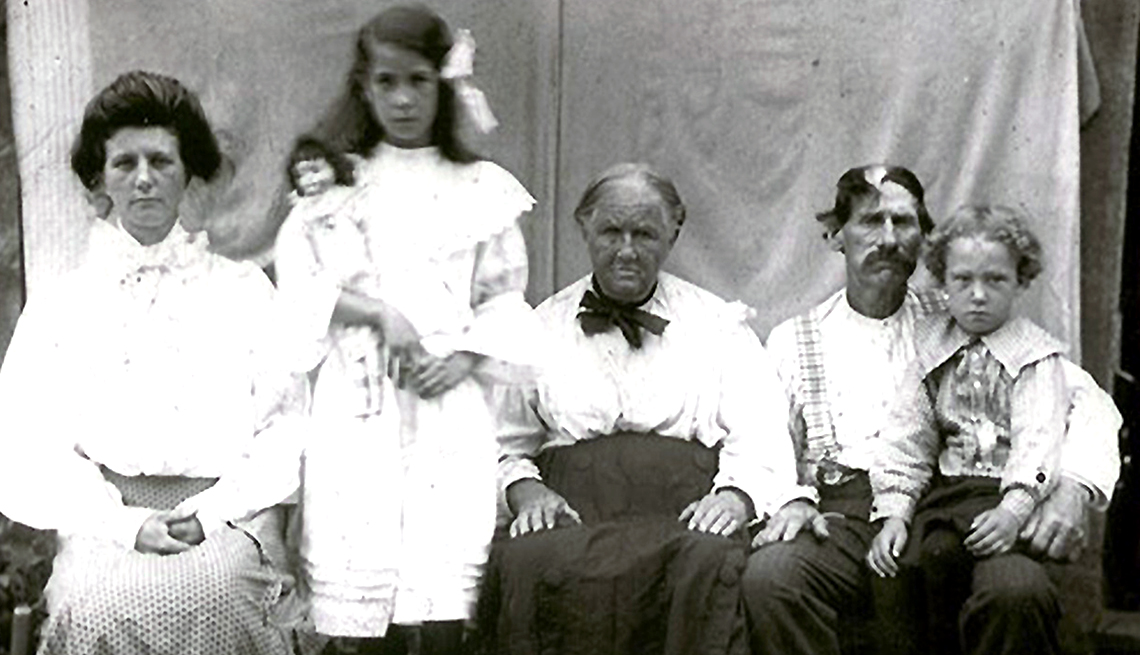 Civil War veteran Moses Triplett, second from right, with his first wife, Mary, sitting to his left. After Mary's death in the 1920s, Triplett married Elida Hall, 50 years his junior.

The last recipient of a Civil War pension from the federal government has died, closing the book on a story that spanned more than 150 years and included a soldier who fought for both the Union and the Confederacy.

Irene Triplett, 90, died May 31 at a nursing care facility in Wilkesboro, North Carolina. Several improbable developments came together to make her the last pensioner; she received $73.13 a month from the Department of Veterans Affairs, according to news reports.

The story of how Triplett received the pension began with her father, Moses “Mose” Triplett. He fought on both sides during the Civil War, said Dennis C. St. Andrew, the past department commander of the North Carolina Department of the Sons of Union Veterans of the Civil War. The group is dedicated to preserving the history and legacy of those veterans.

St. Andrew said he and his wife visited Irene Triplett several times at the care facility. “My wife and I would go a couple of times a year, especially Christmas and in the spring,” he said. “We'd bring her flowers, bring her a card with a nice gift in it, and visit her.”

Father switched sides on his way to Gettysburg

Although Triplett generally didn't discuss the war, the veterans group researched her family. Moses Triplett deserted the Confederacy in 1863, after becoming ill and being hospitalized while his unit was marching in Virginia. It was on its way to Gettysburg for the famous battle, St. Andrew said.

His timing for the desertion was fortuitous. The Wall Street Journal, in a 2014 story about benefits for families of veterans of long-ago wars, reported that 734 of the 800 men in Triplett's regiment died, were wounded or were captured at Gettysburg.

Triplett joined the Union Army in 1864. “He served his time out with the Union so he would get a pension,” his grandson, Charlie Triplett of North Wilkesboro, North Carolina, told the Journal. Moses Triplett was discharged in 1865.

In 1924, Triplett, at 83, married Elida Hall, who was nearly 50 years his junior. It was his second marriage, according to news reports; his first wife died in 1923.

Such an age disparity in marriages wasn't entirely unusual at the time. Researcher Jay Hoar told the Journal that he had uncovered 72 marriages of Civil War veterans in which there was at least a 19-year age difference between husband and wife. That included one union between a 93-year-old man and his 26-year-old bride.

"Irene was about as close as you could get to a Civil War soldier. We always tried to give her respect and honor her for her situation and also for her life."

Many marriages occurred during the Great Depression, when a military pension helped provide financial security and the wife could serve as her older husband's caregiver.

"I wanted to get away from both of them,” Irene Triplett told the Wall Street Journal in 2014, speaking of her parents, who, she alleged, would physically abuse her. “I wanted to get me a house and crawl in it all by myself."

"She was a very nice lady who had a very hard life,” St. Andrew observed. The surviving Tripletts, he added, lived for a time at a local home for the poor. He noted the difficulties a child growing up in an area with many relatives of Confederate veterans faced, saying, “The kids in school called her a traitor."

When her mother died, in 1967, Irene Triplett, who had a cognitive disability and thus was eligible for the pension for life, became the recipient. She had lived at the nursing facility, Accordius Health, for about nine years, according to its activities director, Jamie Phillips.

But the good-natured resident rarely talked about her past. “She didn't say much about growing up, and I think it's a wall built that she just preferred not to talk about,” Phillips said. “You would have never thought life slighted her."

St. Andrew said he and his wife couldn't visit Triplett this spring because of the COVID-19 outbreak. (Nursing facilities barred visitors early in the pandemic, although some are beginning to relax restrictions.)

Triplett's death ends another direct tie between today and the Civil War. The last known Confederate and Union veterans died in the 1950s; the last known widow of a veteran died in 2004.

"Irene was about as close as you could get to a Civil War soldier,” St. Andrew said. “We always tried to give her respect and honor her for her situation and also for her life."