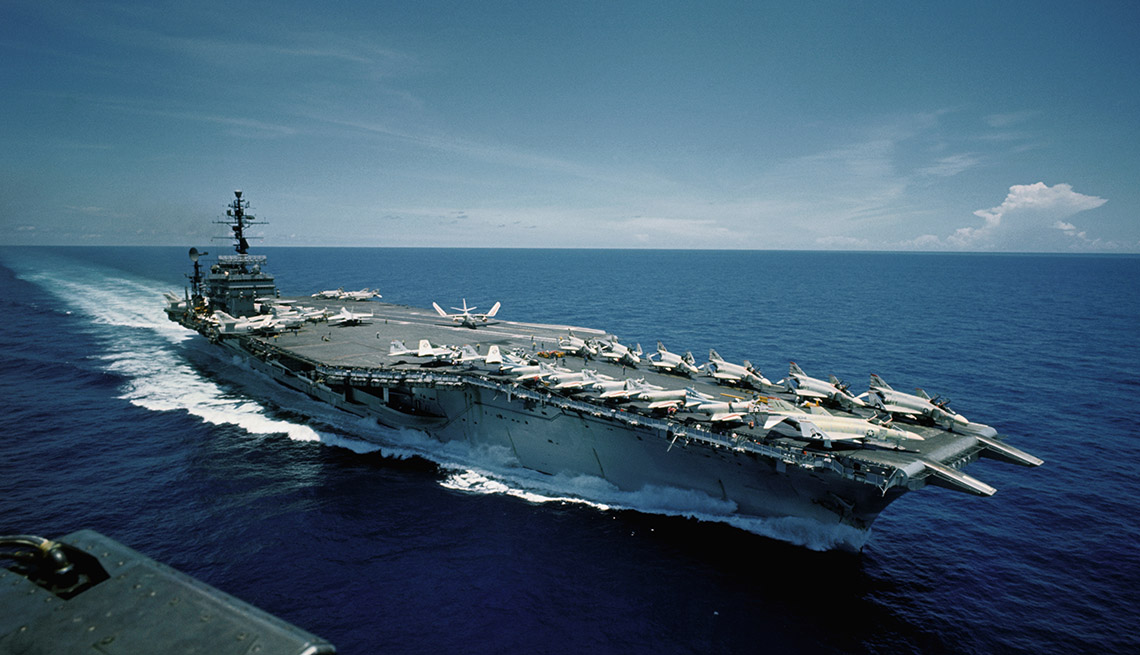 Aerial views of the aircraft carrier USS Constellation at sea on September 3rd, 1966 in Vietnam.

The “blue water” Vietnam veterans — those who were stationed on ships in deep waters off the coast of Vietnam — will have to wait until January for the Department of Veterans Affairs (VA) to begin processing their newly eligible benefits claims for exposure related to Agent Orange.

Although the recently signed Blue Water Navy Vietnam Veterans Act of 2019 gave the VA until next year to implement benefits, some advocates say that time line is too long.

“Time is of the essence in this matter. Blue Water Navy Veterans are dying every day,” said John Wells, a retired Navy commander and executive director of Military Veterans Advocacy, in a letter Monday to VA Secretary Robert Wilkie.

Wilkie said in a news release that the VA is “working to ensure that we have the proper resources in place to meet the needs of our Blue Water Veteran community and minimize the impact on all Veterans filing for disability compensation.”

“[The] VA will use this additional time Congress provided to develop new policies supporting the law, hire and train additional staff to comply with the law, and gather and digitize records from the Naval History and Heritage Command in order to support faster claims decisions,” a VA spokesperson said in an email.

“This will ultimately lead to a smoother and faster claim process for all Veterans and ensure the department has the proper tools in place to process Blue Water Navy claims as quickly as possible to get Veterans and survivors the benefits they have earned with minimal delay,” the spokesperson said.

Although the VA has said that as many as 560,000 veterans could qualify under the law, advocates say the number is closer to 90,000.

The Veterans Benefits Administration “is already struggling to get on top of their well-publicized backlog of claims,” said Rebecca Burgess, a research fellow at the American Enterprise Institute. “They’ve also been criticized for the inaccuracies in their appeals system, and so in theory could be working on the front end to avoid such problems.”

Wells said the VA had already begun processing claims under Procopio v Wilkie, a case in which an appeals court ruled that Alfred Procopio Jr., who served on the aircraft carrier USS Intrepid off the Vietnam coast, was “entitled to a presumption of service connection” for his illnesses.

“It’s really a confusing mess. The problem was that bill [Blue Water Navy Vietnam Veterans Act of 2019] was unnecessary, it was unartfully worded.… The VA was starting to process claims under Procopio, we had people get their benefits, and now everything comes to a screeching halt,” Wells said.

In the letter sent to Wilkie, Wells’ group tells the secretary to rescind the stay or clarify. Otherwise, the organization will consider filing legal action, Wells says.

Meanwhile, the VA is encouraging blue water veterans to submit disability compensation claims for conditions presumed to be related to Agent Orange exposure. Those over 85 or with life-threatening illnesses will have priority in processing.

If a veteran’s claim was previously denied, a new claim can be filed based on the change in the law.

Other veteran service organizations such as the Veterans of Foreign Wars (VFW) are helping former service members but not pursuing action against the VA.

“The VFW hopes that VA can assist blue water veterans before the January 2020 deadline, especially severely ill veterans who have already been diagnosed as having one or more of the 14 presumptive illnesses associated with Agent Orange exposure,” says Joe Davis, the group’s director of communications and public affairs. “The VFW will work with VA and the veterans we represent to deliver these deserved benefits as soon as possible.”