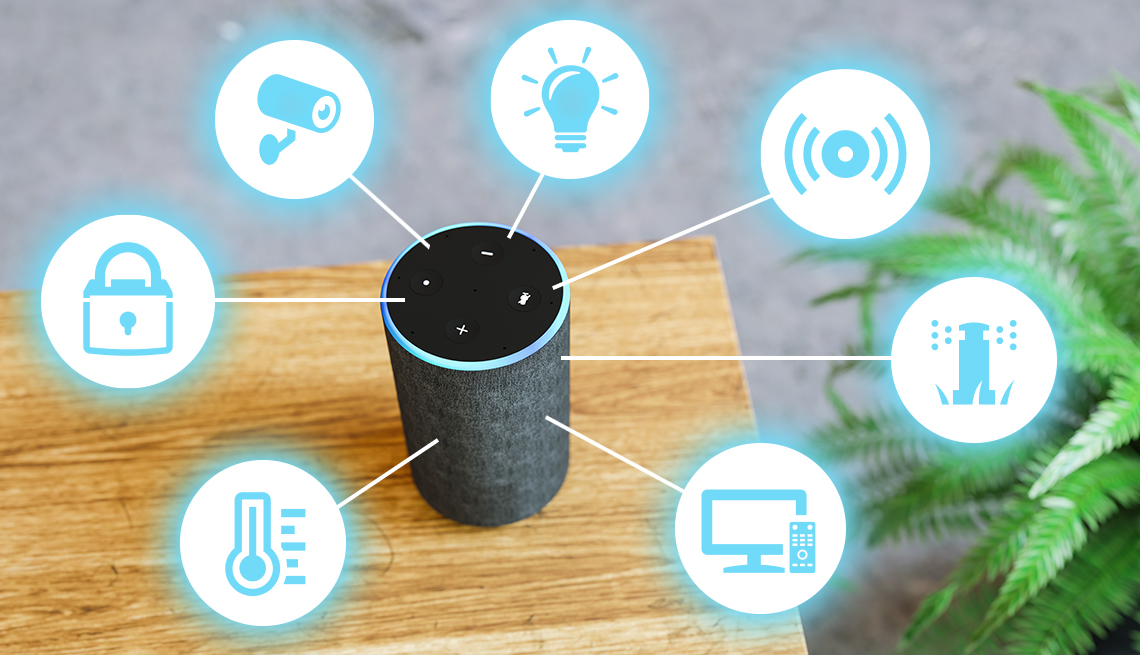 That represents 78 percent year-over-year growth, according to a report this year from NPR and Edison Research.

In a word, wowza.

As you likely know, these relatively inexpensive devices — from Amazon, Apple and Google — have a microphone that hears your question or command and delivers a human-like response through its speaker.

“There has never been a more natural way to communicate with technology than using your voice,” says Katherine Prescott, founder and editor of VoiceBrew. “There’s something so magical about these devices, like we’re living in the future.”

Her digital media company is dedicated to helping people get the most out of Amazon Echo products with articles, blog posts and email newsletters.

But though you’re probably aware that you can ask these speakers questions — such as “What’s the capital of Spain?” or “How many quarts make up a liter?” or “How far is Miami Beach from Boca Raton?” — these virtual helpers are more than just an always-available librarian.

Here are a handful of things to try, from controlling your smart home devices and making calls to setting reminders and playing games.

Features may vary slightly among Amazon, Apple and Google speakers.

As long as your smart home devices support smart speakers, and many of them do, you can control your home using your voice. Examples include August locks, Nest thermostats and Philips Hue lightbulbs.

To get going on an Amazon Alexa speaker, go to the Alexa app on your smartphone or tablet and tap the three little lines in the top left corner.

Unexpected uses
for your smart speaker

Smart speaker skills range from the sublime, such as reciting Shakespeare, to the ridiculous, like making farting sounds. Some other ideas to consider:

1. Schedule a doctor’s appointment. Linking your smartphone to your calendar can make setting an appointment easy.

You also can find a dentist or ophthalmologist with Google Assistant or even get average prices for a root canal with Alexa.

2. Call for a car. Going somewhere?

Once you’ve added your account information to your voice assistant, you can just ask your smart speakers to hail a Lyft or Uber.

3. Eliminate senior moments. You can ask smart speakers to remember details you tend to forget or rarely have to recall.

Just tell Google or Alexa to keep track of, say, where you stashed your homeowner’s policy or what your son’s shoe size is. It’s great for gift giving.

4. Help you sleep. Both Google Assistant and Alexa can help you relax.

Just ask, and you’ll get sleeping tips and calming ambient sounds such as ocean waves.

5. Plan a trip. You have to be your own travel agent these days.

With Google Assistant you can use Kayak to find cheap flights. Alexa has an Expedia skill for researching and then helping you reach your destination.

Now select Skills & Games and tap the magnifying glass to search for the product you have, such as “Hue,” “Ring,” “August,” “Nest” and so on. Tap Enable to Use, and follow any other instructions in the app, such as signing into an account tied to that camera, light or thermostat.

Apple HomePod also works with many smart home devices as long as they support the Apple HomeKit platform. A device will mention that on its box.

To connect smart devices to HomePod, open the Home app on an iPhone or iPad and tap on the plus sign in the top right corner. Choose Add Accessory and follow the prompts to add devices such as cameras or smart lights.

Going forward you’ll be able to say things like “Hey, Siri, turn on the lights,” or “Hey, Siri, are the lights in the office on?”

For this speaker, open the Google Home app on a smartphone or tablet and tap the Add + icon. Now select Set up device and finally, New devices. Here you will see your smart device listed, such as Google Home, and then you can let Google search your home for compatible devices on the Wi-Fi network.

Or you can tap Set up some smart lights or another question on the screen. Follow along with the instructions.

Join AARP and connect with a free Amazon Echo Dot

With Amazon Echo and Google Home speakers, you can make free and hands-free phone calls to friends, family and businesses using just your voice. And it doesn’t cost anything to call any 10-digit phone number in the U.S. or Canada.

Even if you don’t know the number or exact address, you can call a business by saying something like “Call the Best Buy near First Street and Main Street,” and it will figure out which location you’re referring to.

You don’t need to set this up on an Amazon or Google device. Just ask to call someone by name if the name is in your Contacts, by number such as saying “Dial 1-212-555-1212” or by business name.

An Apple HomePod will allow you only to make and receive calls tied to your iPhone number. Standard rates apply.

Drop In calls on Alexa devices are similar. They let you check in with friends and family without them having answer the call like an intercom.

“Seniors love talking with kids and grandkids, and you can make free Drop In calls,” Prescott says. “You connect automatically and immediately begin speaking.”

The recipient must first agree to accept Drop In calls from the other person. Drop In calls can be initiated from another Echo speaker or from the Alexa app on a smartphone.

1.     Sign up for Alexa Calling and Messaging. Open the Alexa app and tap the Conversations icon (the text bubble in the bottom middle of the app).

2.     Follow the on-screen prompts, such as entering your first and last name as well as your mobile number.

3.     Tap the Contact icon in the top right of the app, the icon shaped like a person, to allow Contacts to drop in on you. Select a name from the list of contacts. Tap the toggle beside Contact can Drop In anytime. 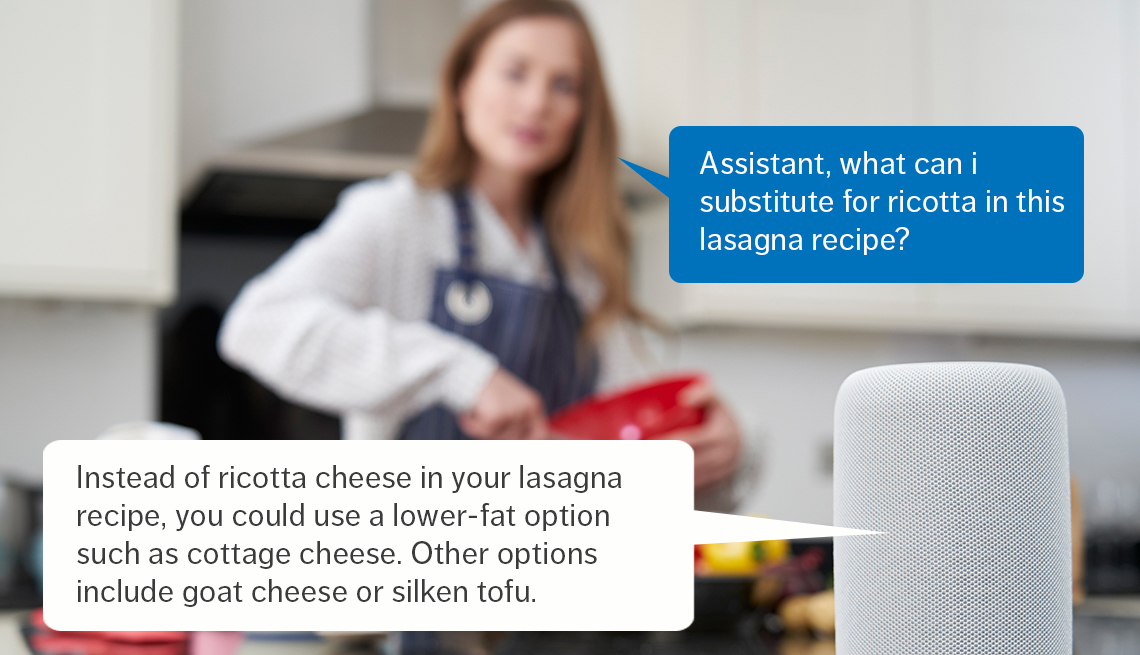 A few more tricks you can do with these smart speakers:

Want a reminder to take pills or to call someone at a particular time?

For all three smart speakers, simply say the wake words — “Alexa,” “Hey, Siri,” or “OK, Google”  — followed by your request, such as “At 8 a.m. tomorrow, remind me to take out the recycling.” You can use it as an alarm to set a wake-up time every day and use it as an oven timer to help you in the kitchen.

This one works only with Google Home speakers.

Your Google Assistant can help you remember where you left things. Say something like “OK, Google, remember my passport is in the top drawer.” When you need it in the future, ask “Where’s my passport?” and “she” will tell you where it is.

Neat, eh? This little-known trick does not work with Amazon Alexa or Apple’s Siri, at least not yet.

For example, you can say “OK, Google, let’s play trivia” and you’ll be asked how many people want to play. Or “Alexa, play the Magic Door,” for a solo adventure game.

In some cases, you may be asked to install an Alexa Skill first in the app, but many of the games work simply by asking for them. Thousands of games are available, and most are free.

A fun 20 Questions-like game is called Akinator, which works with both Amazon and Google.

As you can see or, rather, hear, your smart speaker is capable of a lot more than just serving as a cyber encyclopedia.

You can ask to play one of 50 million songs from your favorite music streaming service; order an Uber or Lyft by asking for it; create a shopping list or even order items online to be delivered to your door; and if you can’t find your phone, you can ask some speakers to make it ring loudly even if it’s on silent. You get the idea.

Part of the fun is experimenting, too, such as asking for audiobooks, jokes, podcasts and stories. 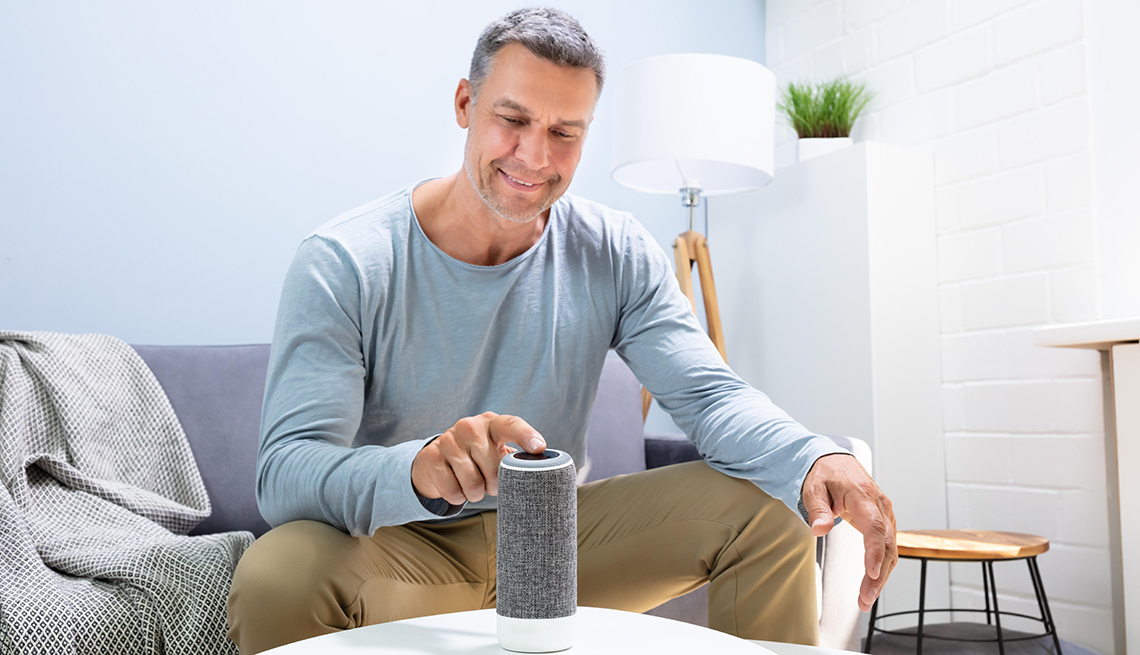 Setting up your new device 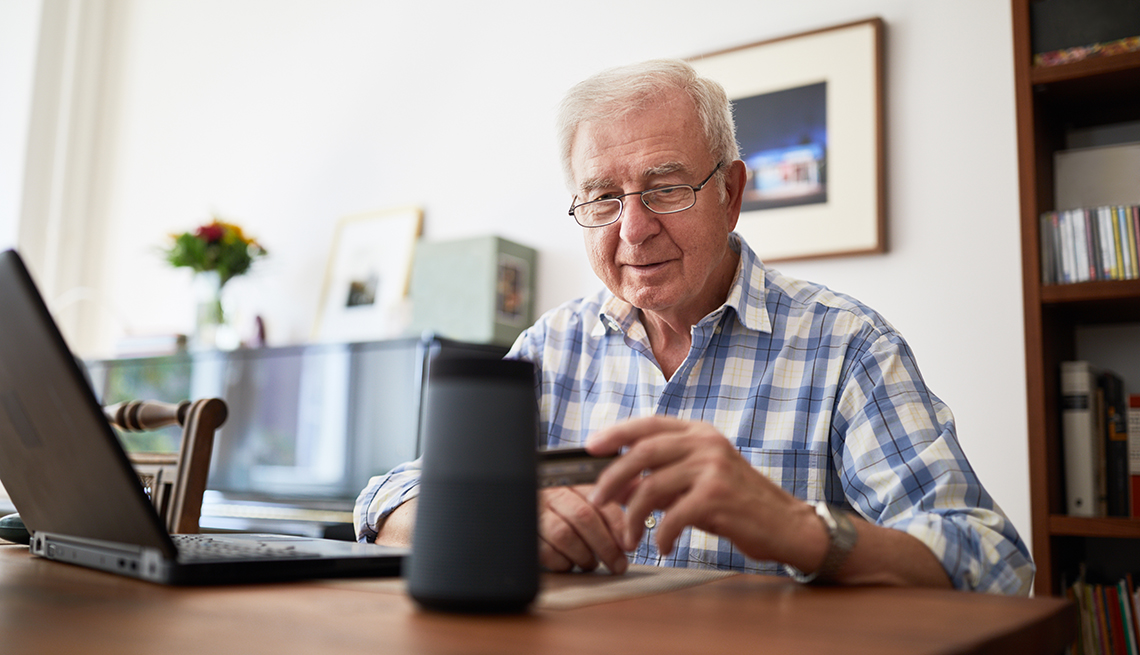 Is your speaker spying on you? 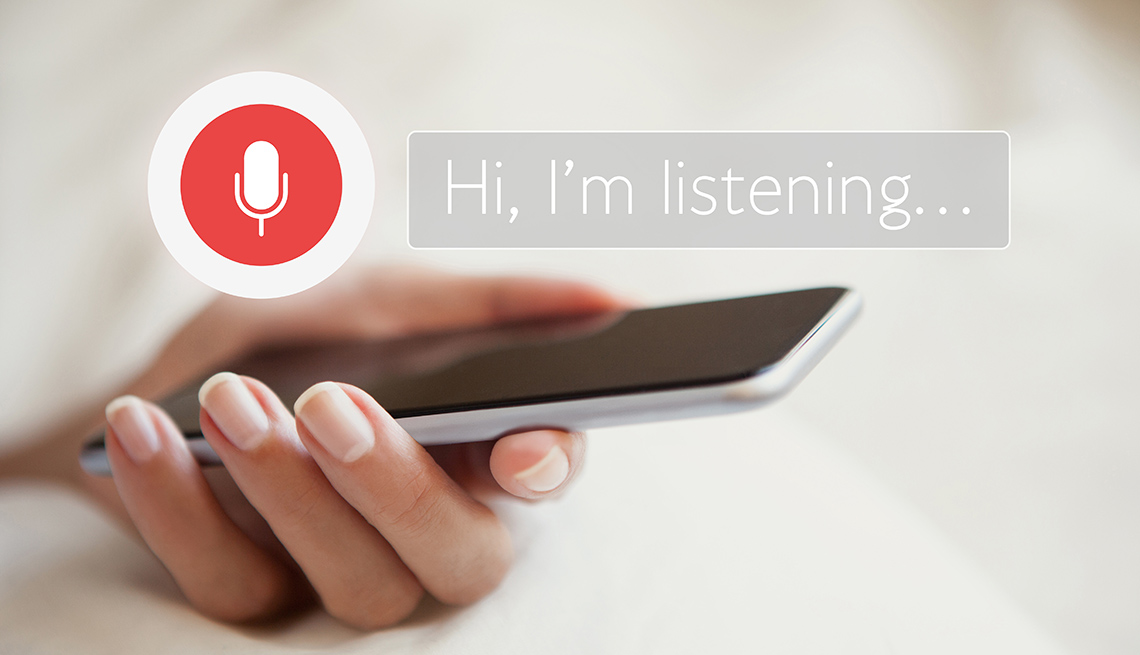 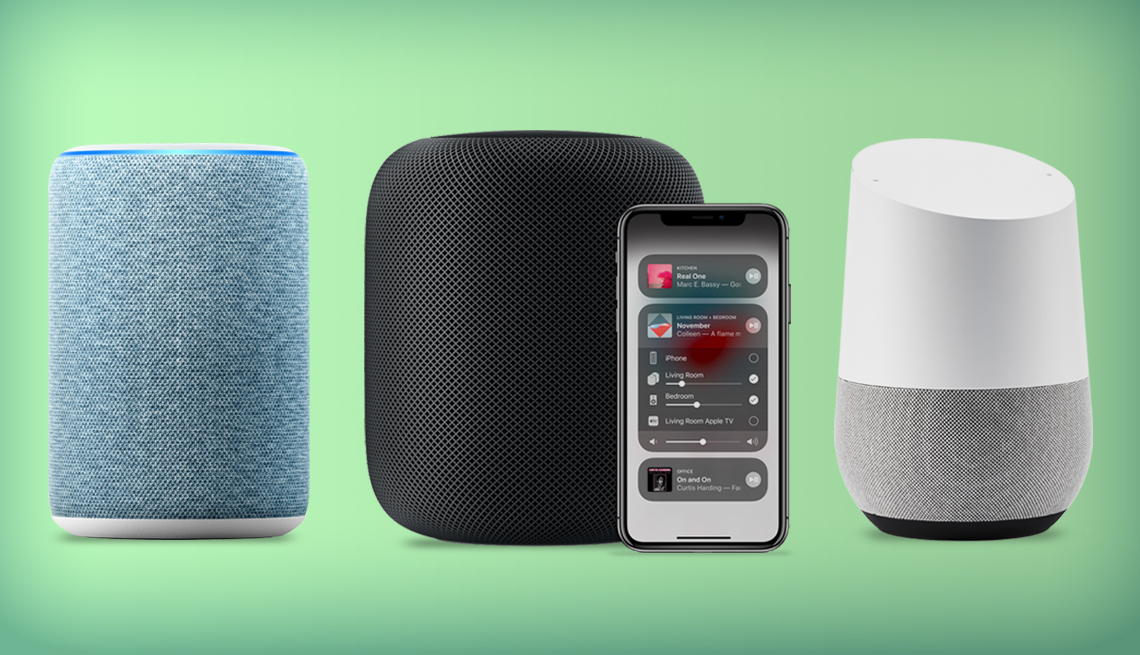 The voice tech to shop for