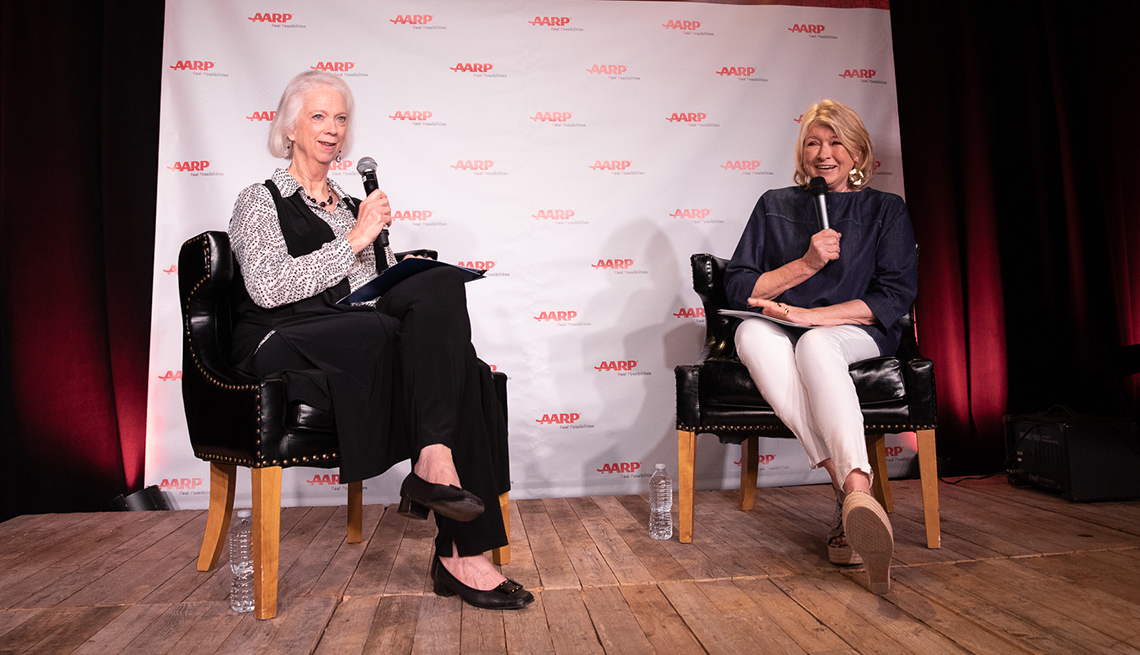 Businesswoman Martha Stewart and AARP Chief Communications and Marketing Officer Martha Boudreau kicked off a series of talks at the South by Southwest (SXSW) music and media conference Monday with a lively discussion on technology, marketing and Stewart’s role for nearly 40 years as a TV personality, publisher, e-commerce maven and, now, social media star.

From the stage of a packed house at Stubb’s Bar-B-Q, the two Marthas celebrated the particular joys of life after 50 — a time for exploration, inspiration and innovation, they said.

“What I love about your approach at this stage in life is that you celebrate the new,” Boudreau said, and Stewart agreed that at age 77, she’s as busy growing and learning as she’s ever been. Age for her is a mind-set.

“You’re aging the moment you’re born,” Stewart said. “That’s what aging is. It’s just growing up. It’s living. And as we get older, we get more powerful. Age is powerful.”

Boudreau noted that 100 million U.S. consumers are over age 50, and the age group is the most economically robust cohort worldwide, generating $7.6 trillion in annual economic activity. The longevity economy, as it’s become known, would be akin to the third largest economy in the world, behind the U.S. and China. More than half of 65-year-olds are working, and it is an audience hungry for technology. Consumers over 50 are considered the most media-connected population of any age group.

Stewart has always been an early adopter. Martha Stewart Living magazine is celebrating its 30th anniversary this year (“I’m planning a huge party because I want everybody who ever worked for me to be there,” she said), and she now has a huge presence online, with 3.72 million followers on Twitter, around 3 million across two Instagram accounts, and 2.4 million on Facebook. Her latest TV hit, Martha & Snoop’s Potluck Dinner Party, which she hosts with rapper Snoop Dogg, is heading into its third season on VH1.

Her latest venture: health care for aging populations. In June, she will open the second location of the Martha Stewart Center for Living at Mt. Sinai Medical Center in Manhattan. The outpatient ward focuses on a holistic approach to geriatric health care that looks at everything from physical health to investing, spiritual and emotional support, and personal happiness.

The goal is to help older people stay in their homes as long as possible. “It is terribly important not to demean the future life of an older person by putting them in a room in a nursing home,” she said. “Patients heal much faster when they stay at home.”

On stage at SXSW, Stewart was as true to her brand as ever — and characteristically outspoken.

On technology: “Older folks shouldn’t just give up on tech. I gave my mother at 85 a computer course, and she learned how to do email, investigate on the internet and more. She drove her Volvo until she was 93. Getting older is not about giving in and giving up.”

On her bucket list: “I don’t believe in bucket lists. I have a list of things I haven’t done yet and places I haven’t been yet. Travel and sightseeing is so important. You get ideas. You get inspired. I want to take my grandchildren to western China, since they speak Chinese, and to Mongolia to see the eagles. I want to go on the Trans-Siberian Railroad, too, and I haven’t been to Petra yet.”

On the importance of saying no: “A blender company wanted an endorsement to make juice, and I said no. Would you use this blender to make juice? No. If you’re making juice, you use a juicer, not a blender. You have to read the fine print all the time.”

On her electric Tesla vehicle: “I love electric cars. It’s so nice never going to a gas station. So important to try out and learn about and embrace and discover as we age. I love my Tesla, but Elon [Musk] should keep his mouth shut and just make cars.”

Talking about the omnipresent white Apple earbuds at a festival like SXSW: “I will not put those things in my ears. Hearing is important. All the senses are. As you get older, you need to protect your taste, your smell, your touch, your sight and your hearing.”

As the discussion wrapped, Boudreau asked whether anything about Stewart’s brand has changed as her audience has aged to 50 and beyond.

Stewart said, “When I think about what the customer needs and wants, I remember — I am that customer. I’ve always put myself right at the center. I live a complicated, busy, frustrating, sometimes angst-ridden life. I do so much every day, but so many people are doing the same thing. Life is complicated. It’s important to make things a little simpler and a little more beautiful, no matter what age you are.”