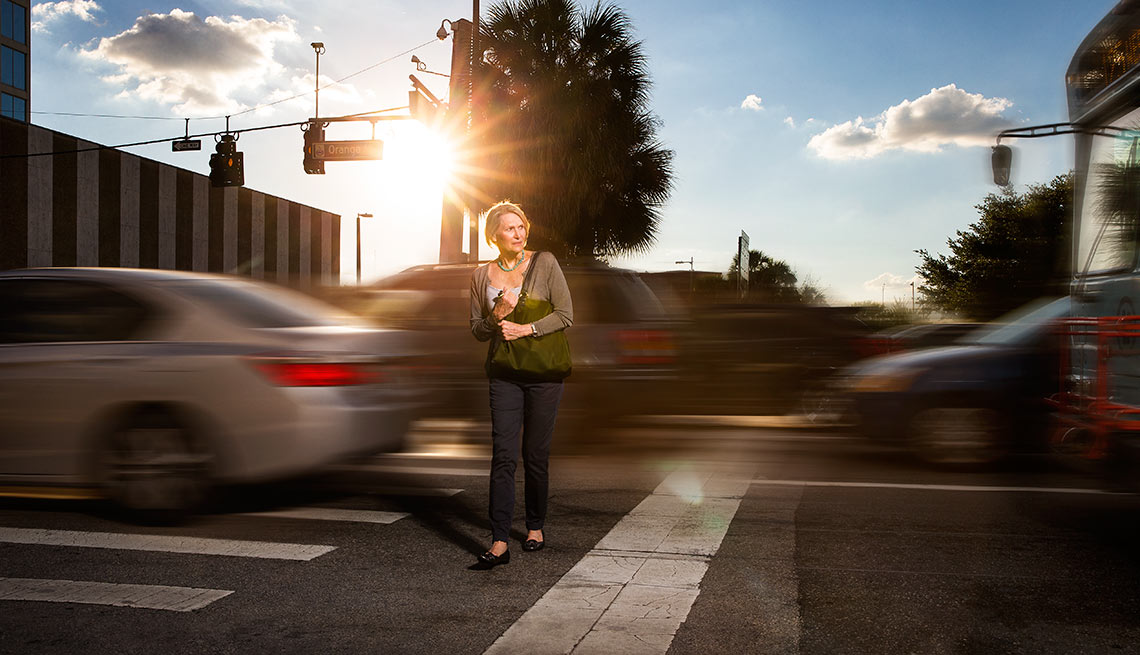 This is the moment Mary McArdle dreads. She steps up to the curb on Orange Avenue in downtown Orlando, headed for St. James Cathedral, just across the street, where she'll meet with her friends at the Prime Timers senior group for their monthly luncheon.

At 77, she knows she can't get through the crosswalk quickly, or easily dodge an errant driver. The "walk" sign lights up and she hesitates a moment, then steps into the street. She's halfway across when a white Ford Ranger pickup truck, heading in the opposite direction, turns left, a few feet in front of her.

"That's illegal," she yells, and wags a finger toward the driver, who doesn't notice McArdle, or her admonishment. "Oh, that was scary," she says, and pats her chest.

McArdle used to work as a crossing guard, but had to quit because "my nerves couldn't take it." She had taken that job to protect children, something she hadn't been able to do for her son Kevin. He was struck and killed by a car when he was 8 years old as he walked to a Cub Scouts meeting with his older brother, a few blocks from their Boston home.

Every 2 hours a pedestrian dies in a traffic crash. Here is the rate of survival by speed of vehicle.

"You never get over it. It's been 43 years," McArdle says, her voice quivering. "My son still isn't over it. He said, 'Maybe it was my fault. Maybe I could have saved him.' "

Today she still prefers to drive, but sometimes she has to take her chances in the metropolitan area deemed the most dangerous in the country for pedestrians. In 2013, crashes killed 36 pedestrians and injured another 534 in Orlando and Orange County.

A death every two hours

Walking can be risky in cities and towns across America, where a pedestrian dies in a traffic crash every two hours. Between 2003 and 2012, crashes killed 47,025 pedestrians nationwide and injured another 676,000, according to the "2014 Dangerous by Design" report on pedestrian safety by Smart Growth America, which is supported by AARP. Cutting those numbers has proved difficult: Distracted drivers increasingly look at phones instead of the road; people cross streets when and where they shouldn't; cities and suburban areas have been built to move cars, not to keep pedestrians safe.

"We're all at fault," says Amanda Day, of Best Foot Forward, a coalition that wants to cut pedestrian deaths and injuries in the Orlando area by half. "Careless drivers. Careless pedestrians. Careless design."

Older people bear a higher risk as they navigate America's streets on foot. Those 65 years and older make up about 13 percent of the population, but account for 21 percent of pedestrian deaths. And the consequences of nonfatal accidents are more severe for older victims.

"The elderly don't tolerate simple injuries very well," says John Promes, M.D., the trauma medical director at Orlando Regional Medical Center. A young person with fractured ribs might be discharged from the hospital within a day, he says, "but someone who's 75 years old may end up in the intensive care unit on a ventilator."

Those terrifying encounters can happen anywhere, at any time. 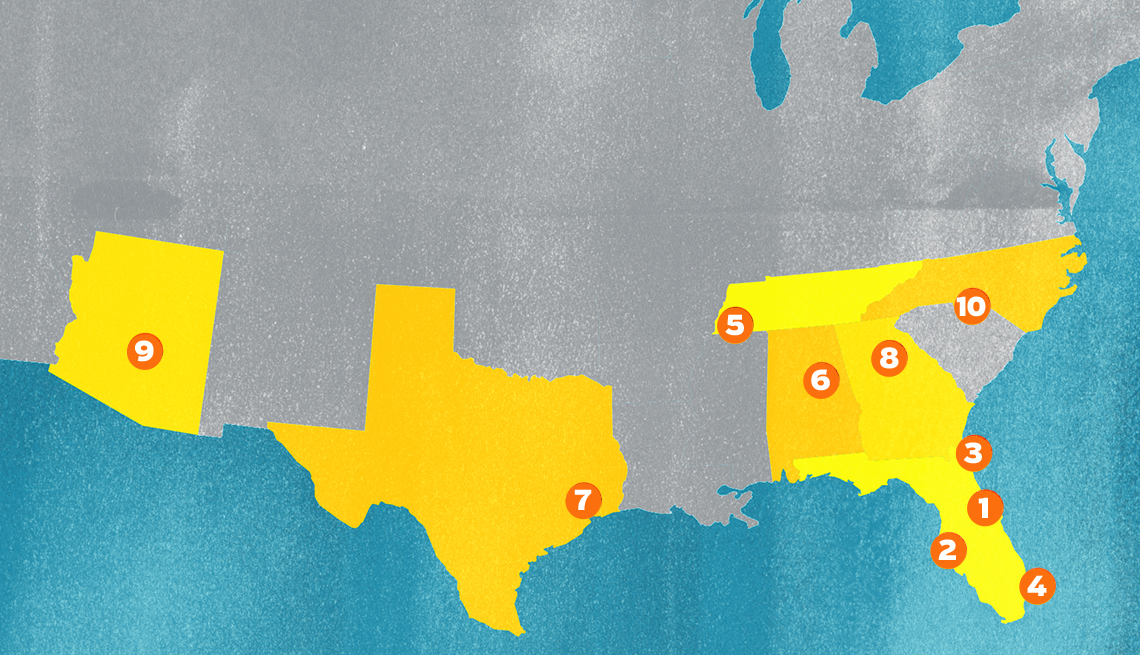 The 10 most dangerous cities for pedestrians in the U.S.

On a rainy evening in Washington, D.C., Charlotte Yeh left her office to meet a colleague for dinner a short walk away. Halfway through an intersection near the restaurant, she heard a loud thump and felt a sharp jolt against her left hip. She flew several feet through the air, her brain puzzling over what had just happened. By the time she landed on the wet pavement, she knew: "I just got hit by a car."

Yeh, the chief medical officer for AARP Services Inc., had worked for over 25 years in Boston emergency rooms. "As an emergency physician, because I've seen so many people hit by cars — children, the elderly and everyone in between — I've always been really, really diligent about making sure I cross at the crosswalk, and that I wait for the walk sign," she says. "I was following the rules."

Yeh assessed herself and determined she likely didn't have any spinal damage, and let bystanders move her into a nearby restaurant where she waited for the ambulance.

"I was sure I was just bruised," she says. "I thought I'd be in the hospital two days." Yeh, who is 62, survived the December 2011 crash without any broken bones, organ damage or head trauma, but the car had smashed her left gluteal muscles, critical for walking and stabilizing the body. She spent five days in the hospital, two weeks in rehabilitation, used a walker for six months and still uses a cane, though she hopes to discard it soon.

"I didn't know it was going to be so hard to get better," she says, but she has searched for the positive in the event. Because of all the physical therapy — more than 10 hours a week for the past three years — she is in the best shape of her life, and has improved balance, which will help prevent future trips and falls. "Now that I have been hit by a car," she says, "I'm probably going to live longer."

And she knows how much worse it could have been: One month after Yeh's crash, a close friend was killed in Sarasota, Fla., by a speeding drunk driver as she jogged along a road at 1 p.m. on a Saturday. A year later, a family friend was struck and killed as she walked through a parking lot in California.

Amy Levner, the manager of AARP's Livable Communities initiative, says, "walking is the cheapest and easiest way for people to stay healthy, but in a lot of communities, it is not safe."

Older people face the added threat of isolation, a problem that will worsen as the population ages. "When they're not getting out as much, they're not seeing friends, they can get lonely and depressed," Levner says. "We're trying to protect people's freedom to go where they want, when they want. Right now, the environment is hostile to them."

Mary Sayago has experienced plenty of that hostility on Orlando's streets. She is 64, with skin bronzed by the Florida sun and a pixie cut of white hair. She has come over to the church hall to join McArdle and a couple dozen others for the Prime Timers' Oktoberfest luncheon, where a three-man band is playing traditional German dancing music.

One afternoon a van turned in front of Sayago when she was halfway across a street. She stopped short, swung her handbag and smacked the front of the van. The driver hit the brakes and looked at her, startled. "I'm sorry," he said. "I didn't see you."

Sayago says near misses while walking have forced her to change her habits. "I probably could get a ticket for it, but I feel safer crossing in the middle of the street than at that corner," she says. "I have more time for them to see me."

But officials warn that is a dangerous solution. Sgt. Richard Ruth, head of the Orlando Police Department's pedestrian safety division, says there is blame to go around for the city's high rate of street deaths. "There is a myth that pedestrians always have the right-of-way," he says. "That's not true." He warns against pedestrian overconfidence. "No one intends to get run over," he says.

To better educate pedestrians, the Best Foot Forward coalition gives presentations several times a month at churches, Rotary Clubs and senior-living centers, explaining where and when pedestrians can cross streets, and how they can stay safe on the streets. "A big complaint we hear is that the signals are too short," Day says.

That can be a particular problem for older people on wide, multilane streets. More than half of pedestrian traffic deaths over the past decade occurred on these "arterial" roads through suburban sprawl, where drivers often speed. More than 90 percent of people hit by cars traveling at 20 miles per hour survive the crash, but at 45 miles per hour, only 35 percent live.

Better design can help. If a boulevard has a raised median, pedestrians can pause and wait for traffic to clear, and overhead lights make crossings less treacherous after dark. Planners have other tricks, too: On roadways with fewer lanes, street parking, and buildings and trees closer to the roadway, drivers naturally slow down because they have to focus on more elements. "You give them more things to pay attention to," says Mighk Wilson, the smart-growth planner with MetroPlan Orlando. "You have to make the drivers feel uncomfortable so they'll slow down."

These redesigns, along with dedicated pedestrian areas, can make an area more desirable, attracting stores, restaurants and other services, and giving an area more of a small-community feel. This can be slow and expensive work. But there's no alternative to making areas more pedestrian-friendly, particularly as Americans age, says AARP's Levner.

"We don't have a choice," she says. "Even if it's street by street, we have to start somewhere."

Brian Mockenhaupt is a freelance writer and former Army infantryman.