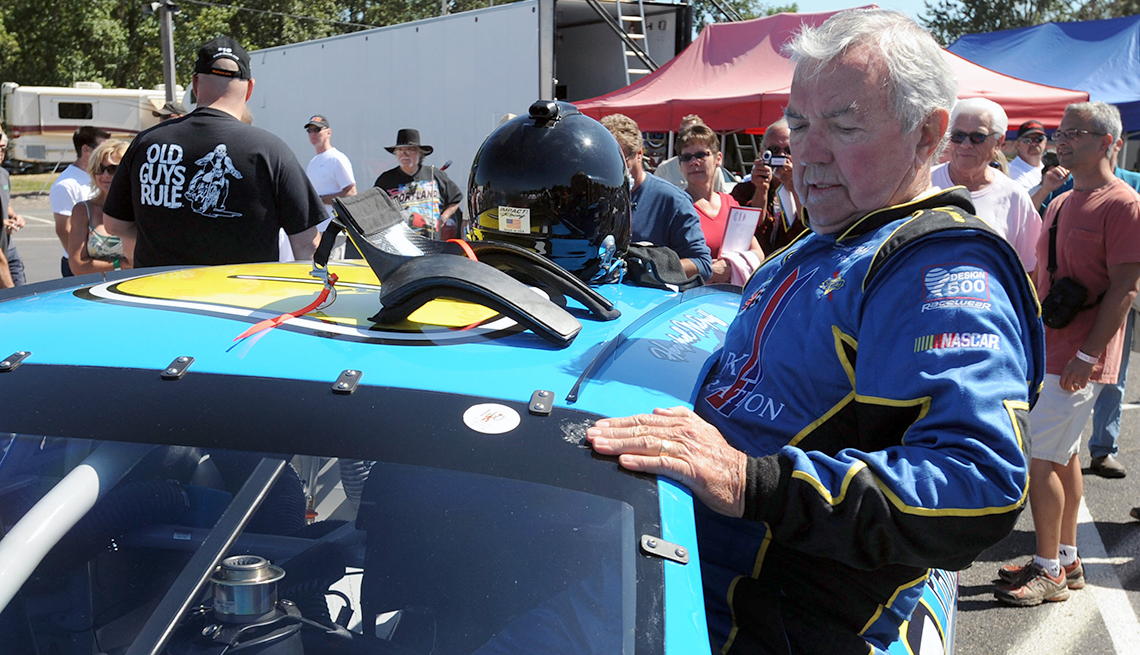 Hershel McGriff at a NASCAR Camping World Series West event in 2009. He says getting into a race car wasn't the scariest part of his most recent race.

Ninety-year-old Hershel McGriff may have finished in last place among 18 drivers in the K&N Pro Series West event at the Tucson Speedway in Arizona. But it didn’t matter. He achieved a personal victory Saturday night by becoming the oldest driver ever to compete in a NASCAR-sanctioned race.

In front of more than 6,000 fans, the Green Valley, Ariz., resident raced until the end, finishing six laps behind the winner, 17-year-old Kody Vanderwal. In doing so, McGriff broke a record he last set in 2012, when he was 84. McGriff’s son, Hershel Jr., and granddaughter, Mariah, also were on hand Saturday, competing in separate races at the Tucson Speedway.

NASCAR has no maximum age rule, but drivers do have to pass a physical. Not a problem for McGriff. Following a stress test, he was medically cleared to race.

Oddly enough, McGriff was apparently more nervous about playing the national anthem on his trombone before the event than he was driving on the track.

“Instead of racing young kids at 120 miles per hour, he’s more nervous about playing his trombone,” Tucson Speedway President John Lashley told the Arizona Daily Star. “He’s just wound different than you and me.”

“I’ve had a great life. I wouldn’t backtrack for anything. I have family that’s with me and behind me, so it’s great,” McGriff told the Tucson Star.

Also proving that age is just a number is Tom Watson who, at 68, became the oldest winner of the Masters Par 3 Contest last month. The event also featured fellow legends Jack Nicklaus, 78, and Gary Player, 82. The previous record holder was Sam Snead, who nabbed the crown at age 62 in 1974.