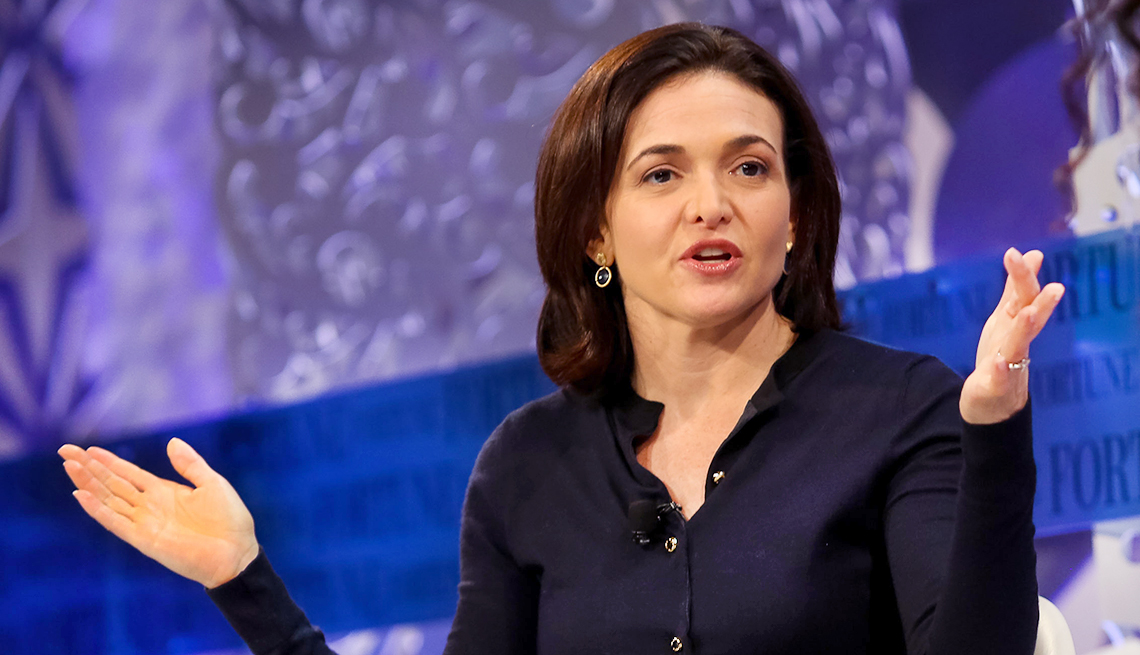 Sheryl Sandberg is the chief operating officer of Facebook and founder of Leanin.org.

En español | The last thing I ever said to him was "I'm falling asleep." I met Dave Goldberg in the summer of 1996 when I moved to Los Angeles, and a mutual friend invited us both to dinner and a movie. When the film began, I promptly fell asleep, resting my head on Dave's shoulder. Dave liked to tell people that he thought that meant I was into him, until he later learned that — as he put it — "Sheryl would fall asleep anywhere and on anyone."

Dave became my best friend, and L.A. began to feel like home. He helped me become a bit cooler by introducing me to the internet and playing music I'd never heard. When I broke up with my boyfriend, Dave stepped in to comfort me, even though my ex was a former Navy SEAL who slept with a loaded gun under his bed.

Dave used to say that it was love at first sight for him, but he had to wait a long time for me to "ditch those losers" and date him. Dave was always a few steps ahead of me. But I caught up eventually. Seven and a half years after that first movie, we married.

My husband was my rock. When I got upset, he stayed calm. Like all married couples, we had our ups and downs. Still, Dave gave me the experience of being deeply understood, truly supported and utterly loved. I thought I'd spend the rest of my life resting my head on his shoulder.

Then in 2015, 11 years after our wedding, we went to Mexico to celebrate a friend's birthday while my parents babysat our son and daughter in California. Friday afternoon, we were hanging out by the pool playing the game "Settlers of Catan" on our iPads. For a change, I was winning, but my eyes kept drifting closed. "I'm falling asleep," I admitted, and I curled up on the floor. At 3:41 p.m., someone snapped a picture of Dave holding his iPad. I'm asleep on a cushion in front of him. Dave is smiling.

When I woke up more than an hour later, Dave was no longer in that chair. I joined our friends for a swim, assuming he'd gone to the gym as he'd planned. I went back to our room to shower; he wasn't there, but I was not concerned. I called our children, then walked out to the beach and joined the rest of our group. Dave wasn't there either. I felt a wave of panic. Something was wrong. I shouted to Dave's brother, Rob, and his wife, Leslye, "Dave isn't here!" Leslye paused, then yelled back, "Where's the gym?" I pointed toward some nearby steps and we started running.

We found Dave on the floor by the elliptical machine, his face slightly blue. We all screamed. I started CPR. Rob took over from me. A doctor came and took over from him.

The ride in the ambulance was the longest 30 minutes of my life. When we finally got to the ER, they carried Dave behind a heavy wood door, refusing to let me through. After what felt like forever, I was led into a small room. The doctor came in and sat behind his desk. I knew what that meant.

And so began the rest of my life. It is a life I was completely unprepared for. Telling my children that their father had died. People speaking of Dave in the past tense. People telling me, "I'm sorry for your loss."

Time slowed way down. Day after day, my kids' cries and screams filled the air. My own cries and screams — mostly inside my own head — filled the rest of the available space. I was in "the void": a vast emptiness that fills your heart and lungs, and restricts your ability to think or even breathe.

Grief is a demanding companion. In those early days and weeks and months, it was always there. Simmering, lingering, festering. Then, like a wave, it would rise up and pulse through me, as if it were going to tear my heart right out of my body. In those moments, I felt like I couldn't bear the pain for one more minute, much less one more hour.

I saw Dave lying on the gym floor. I saw his face in the sky. At night, I called out to him. I woke up each morning and went through the motions of my day, often in disbelief. How could everyone go on as if nothing was different? Didn't they know?

I searched for ways to end the sorrow. Early on, I failed. The anguish won every time. I might be sitting in a meeting or reading to my kids, but my heart was on that gym floor.

In the worst of the void, two weeks after Dave died, I got a letter from an acquaintance in her 60s. She wrote that since she was ahead of me on this sad widow's path, she wished she had some good advice to offer, but she didn't. She had lost her husband a few years earlier, her close friend had lost hers a decade before, and neither of them felt that time had lessened the pain. She wrote, "Try as I might, I can't come up with a single thing that I know will help you."

That letter, no doubt sent with the best of intentions, destroyed my hope that the pain would someday fade. I felt the void closing in on me, the years stretching before me endless and empty. I called my friend and coauthor Adam Grant, a psychologist who studies how people find motivation and meaning. I told him my greatest fear was that my kids would never be happy again. Adam walked me through the data: After losing a parent, many children are surprisingly resilient. They go on to live happy childhoods and become well-adjusted adults. Adam told me that, while grief was unavoidable, there were things I could do to lessen the anguish for myself and my children.

I thought resilience was the capacity to endure pain, so I asked him how I could figure out how much of it I had. He explained that our amount of resilience isn't fixed, so I should be asking instead how I could become resilient. He convinced me that, while my grief would have to run its course, my beliefs and actions could shape how quickly I moved through the void and where I ended up.

For example, studies have shown that people recover more quickly from grief when they stop blaming themselves for their hardships. In the first months after Dave's death, the thing I found myself saying most often was "I'm sorry." I apologized constantly to everyone. To my mom, who put her life on hold to stay with me for the first month. To my friends who dropped everything to travel to the funeral. To colleagues for my losing focus when emotion overwhelmed me. Adam finally convinced me that I needed to banish the word "sorry." He also vetoed "I apologize," "I regret that" or any attempt to weasel my way past the ban. Adam explained that by blaming myself, I was delaying my recovery, which also meant I was delaying my kids' recovery. That snapped me out of it. I hadn't interrupted everyone's lives; tragedy had.

Another strategy I learned was to question my own expectations. Studies of "affective forecasting" — our predictions of how we'll feel in the future — reveal that we often over-estimate how long negative events will affect us. This was certainly true for me. Every time I tried to tell myself things would get better, a voice inside my head insisted they would not. It seemed clear that my children and I would never have another moment of pure joy again. Never. So, just as I had to banish "sorry" from my vocabulary, I tried to eliminate "never" and "always" and replace them with "sometimes" and "lately." "I will always feel this awful" became "I will sometimes feel this awful." I also tried a cognitive behavioral therapy technique where you write down a belief that's causing you anguish and then disprove it. I wrote, "I will never feel okay again." Seeing those words forced me to realize that just that morning, someone had told a joke and I had laughed. If only for one minute, I'd already proven that sentence false.

We all encounter hardships. Some we see coming; others take us by surprise. It can be as tragic as the sudden death of a child, as heartbreaking as a relationship that unravels, or as disappointing as a dream that goes unfulfilled. The question is: When these things happen, what do we do next?

Resilience is the strength and speed of our response to adversity — and I've learned that we can build it. It isn't about having a backbone. It's about strengthening the muscles around our backbone. I know that not every story has a happy ending. Recovery does not start from the same place for everyone. And adversity is not evenly distributed among us; marginalized and disenfranchised groups have more to battle and more to grieve.

As traumatic as my family's experience has been, I'm well aware of how fortunate we are to have a wide support system of extended family, friends and colleagues, and access to financial resources that few have. I also know that talking about how to find strength in the face of hardship does not release us from the responsibility of working to prevent hardship in the first place. What we do in our communities and companies — the public policies we put in place, the ways we help one another — can ensure that fewer people suffer.

By working with Adam to research and write a book about resilience, I now know that it is possible to experience post-traumatic growth. In the wake of crushing blows, you can find greater strength and deeper meaning. I also believe you can experience pre-traumatic growth: You don't have to go through a tragedy to build your resilience for whatever lies ahead.

I am only partway through my own journey. The fog of acute grief has lifted, but the sadness and longing for Dave remain. I'm still finding my way. But I've learned that when life pulls you under, you can kick against the bottom, break the surface and breathe again.

Excerpted from Option B: Facing Adversity, Building Resilience, and Finding Joy, by Sheryl Sandberg and Adam Grant. Copyright © 2017 by OptionB.Org. Published by arrangement with Alfred A. Knopf, an imprint of The Knopf Doubleday Publishing Group, a division of Penguin Random House LLC.