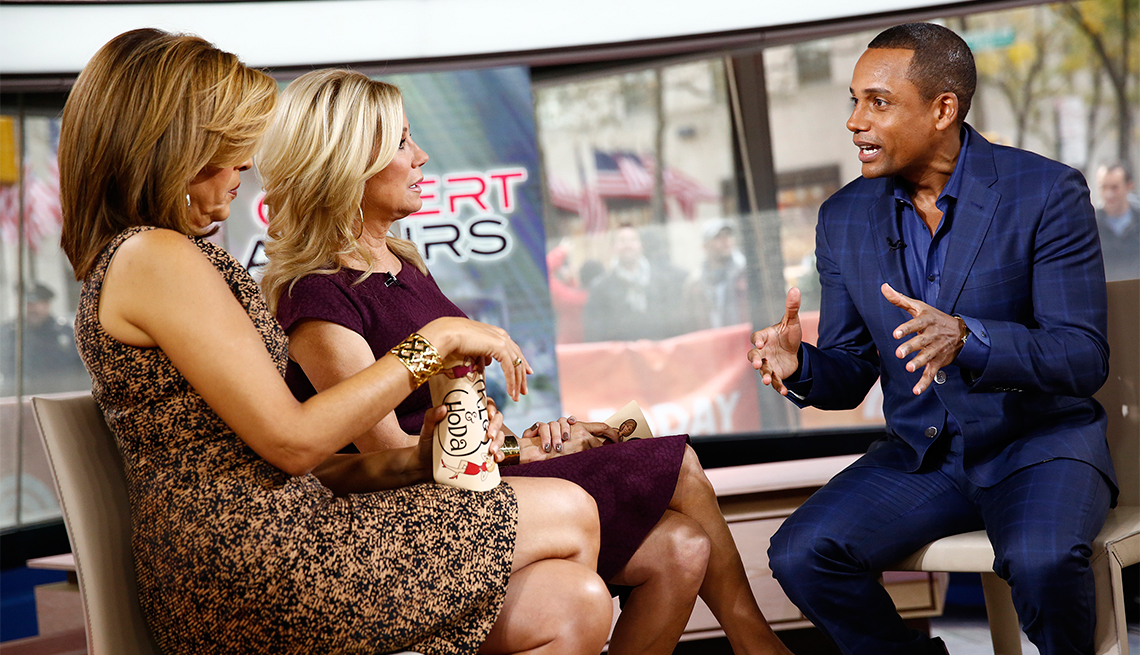 Actor and author Hill Harper appears on the “Today” show with Hoda Kotb and Kathie Lee Gifford in 2013.

Television celebrities Hill Harper and Hoda Kotb share something special: Both are in their 50s and recently adopted a child, becoming a parent for the first time.

Harper, who starred in CSI: NY and recently appeared in All Eyez on Me and Homeland, revealed publicly this month he had finalized the adoption of his 18-month-old son. In an interview with ABC News, the single father said that for the longest time he envisioned he would get married, have biological children, and also adopt. Well, as he approached 50 years old a friend of his posed the question, “Even though you aren’t married, why can’t you just be a dad now?”

Kotb, anchor for NBC's Today show, shared a similar reflection with her viewers: "I've always had this feeling inside that I wanted a baby, but I thought I was too late." She continued, "I was divorced, I had had cancer, and you just think, OK. I don't get everything, and it's OK. And then, all the sudden, you look around and you go, 'Well, why not me?' "

In an interview with AARP, Chuck Johnson, president of the National Council for Adoption, explained that while the age of parents adopting children isn’t tracked, in his decades of experience he has seen a shift. “As a social worker 31 years ago, I dealt with a lot of parents who were under 40 and adopting. Now parents are adopting well into their 40s, 50s, and in some cases older,” Johnson said. 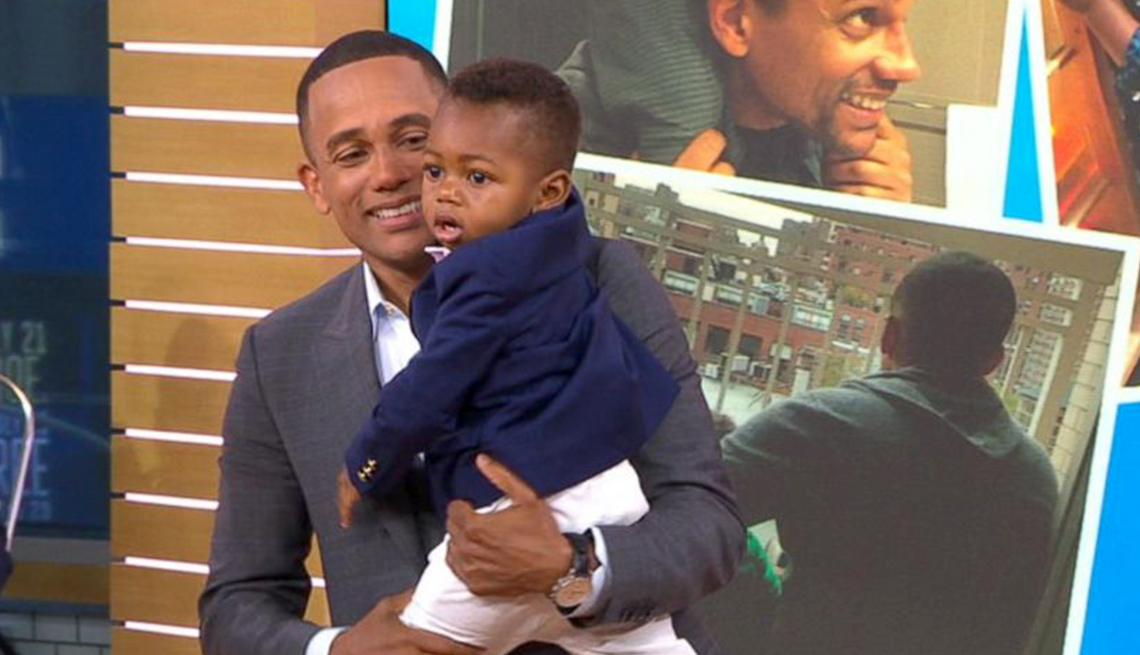 Hill Harper and son Pierce on “Good Morning America,” during an interview on June 16.

Harper admitted he was initially hesitant to consider adoption. And even after meeting with an adoption expert and learning more about the process, he still wasn’t ready. Resuming his Hollywood-style life, the actor and author began shooting a new show and planning for other acting roles. But in November 2015, about six months after that meeting, Harper received a phone call from the adoption representative. Harper remembers the conversation nearly word for word. “He said, 'There is a wonderful young woman who’s having a son in three weeks. Would you be interested in adopting him?' ”

The actor, who had never changed a diaper before, made the life-changing decision to become a father. He scrambled to get ready while also shooting All Eyez on Me. The father-to-be went from the film set to a plane and rushed to the delivery room where he witnessed the birth. He even cut the umbilical cord. Harper, now 51, says the biggest challenge is knowing that each day you are making decisions that will affect the future of your child.

As a first-time mother, Kotb, 52, recently told People she misses nothing about life before daughter Hayley Joy's arrival. “It’s funny because I thought I had the most perfect life, and then I realized after her I didn’t. I realized that this is infinitely better.” 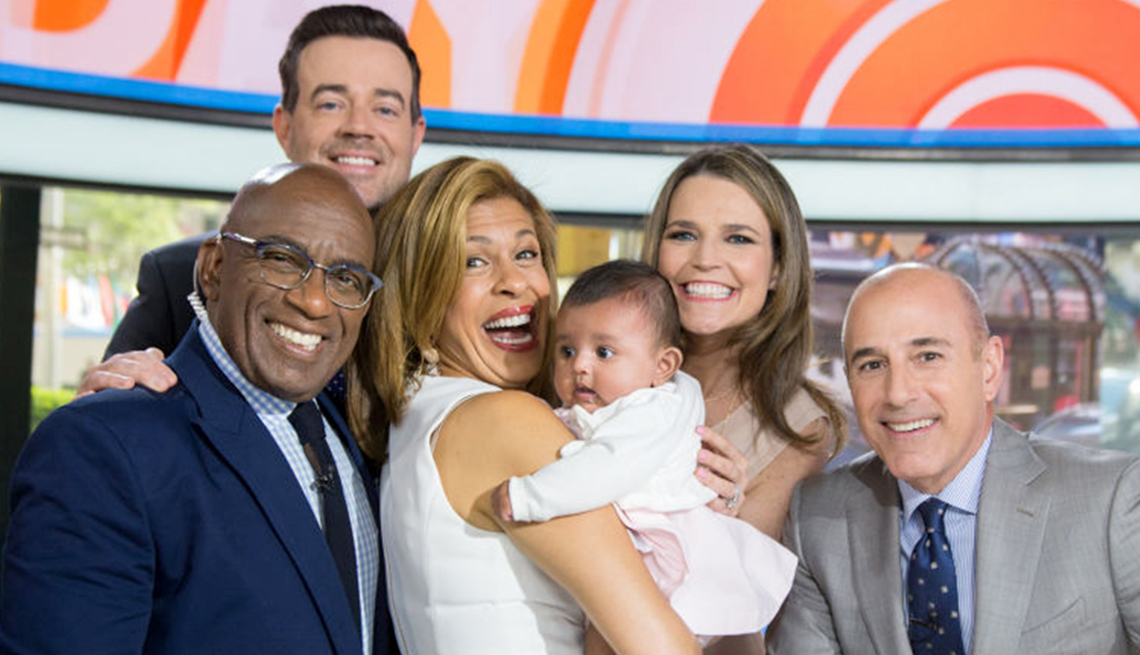 Hoda Kotb brings her daughter, Haley Joy, on the “Today” show on May 12.

Kotb isn’t raising her daughter alone, as her longtime boyfriend is by her side. Kotb told People he was left off the adoption documents to simplify the process, adding, "Haley will call him Dad.”

Adoption processes can be tricky, according to April Dinwoodie, chief executive of the Donaldson Adoption Institute. She told AARP many factors go into approving a parent for adoption, including a home study. She said it’s very important that prospective parents ask a lot of questions when considering adoption. When asked about trends in adoptions, Dinwoodie said there have been shifts. While she would like to see better tracking of overall adoption statistics, she said she’s viewed enough information to know that the age at which people consider adoption has consistently risen. Adoptions of children from foster care are tracked well, Dinwoodie said, adding that the data and census information also show the upward tick. She also suggested that marriage equality is another factor for the increase, as same-sex couples who can legally marry decide to have children.

Both Dinwoodie and Johnson said that despite what some might think, age isn’t everything when it comes to parents being approved for adoption. Johnson talked about how agencies have come to consider age differently, and it’s now less of an obstacle to overcome for parents trying to adopt. Dinwoodie said that while some individual agencies may have policies regarding age, she is unaware of a written rule in the United States stating an age at which a person is too old to adopt. She said some international adoptions do have age limits, but they vary greatly. Though not a first-time parent, Madonna, 58, recently adopted 4-year-old twins from Malawi.

Aside from being celebrities, Harper, Kotb and Madonna are real people — and parents, sharing the love that parents have for their children. In separate interviews with People, Harper and Kotb summed up their new life. Adopting Pierce, Harper said, "was the greatest decision I’ve ever made and I’ve never been happier." Kotb added: “Every day after Haley is better than every single day before.”