Have you noticed more people around your neighborhood? That long-gone college grad is back across the street, and Grandma's moved in, too. The older couple next door has a full house — their son, his wife and two kids. The ranch a few doors down was just bought — jointly — by adult children and their parents.

Three generations under one roof, known as multigenerational housing, is here to stay. 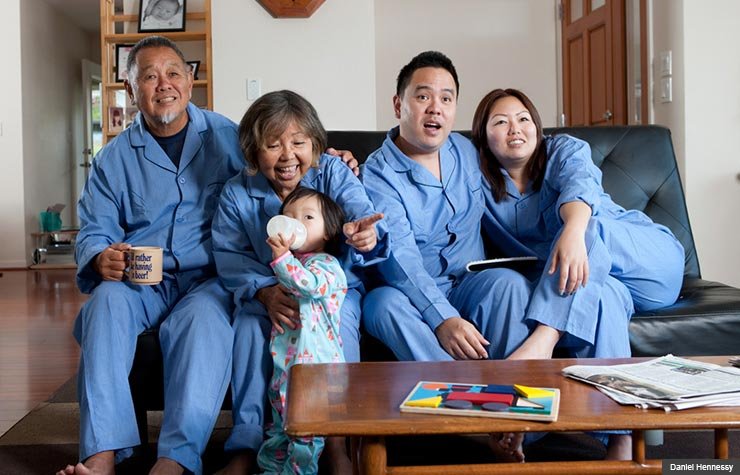 According to a Pew Research Center analysis of the latest U.S. Census Bureau data, approximately 51 million Americans, or 16.7 percent of the population, live in a house with at least two adult generations, or a grandparent and at least one other generation, under one roof. The Pew analysis also reported a 10.5 percent increase in multigeneration households from 2007 to 2009. And a 2012 survey by national home builder PulteGroup found that 32 percent of adult children expect to eventually share their house with a parent.

"It used to be older people whose money had run out who were living with their children, and now it's the next generation that can't keep up," says Louis Tenenbaum, a founder of the Aging in Place Institute, which promotes "multigen" remodeling.

But strong indications show that multigenerational living is on the rise: The U.S. 65-plus population is expected to more than double to 92 million by 2060. Sixty-one percent of Americans ages 25 to 34 have friends or family who have moved back in with parents or relatives (because they have no job, no money and no other place to live). And the latest census projections show the clear growth in cultures, such as Latinos, that already embrace multigenerational housing (non-Hispanic whites will no longer make up the majority of the population by 2043).

Could this be an idyllic world of built-in child care, elder care and three square meals? A solution for avoiding isolation in old age? A way for pooled finances to go further?

Another Pew report did find that more than three-quarters of "boomerangs" — the young adults ages 25 to 34 who move back in with their parents — were satisfied with their living situation. Almost half paid rent and nearly 90 percent helped with household expenses. And in a 2011 report of multigen dwellers by Generations United, a Washington, D.C.-based advocacy group, 82 percent said the setup brought them closer, 72 percent mentioned improved finances, and 75 percent saw care benefits.

Consider long-term care costs alone. A 2012 MetLife Mature Market Institute survey put the average annual cost of a private nursing home room at $90,520, a semiprivate at $81,030 and assisted living at $42,600. Add to those costs the value of peace of mind knowing a loved one is being cared for by family, and multigenerational housing may be the new assisted living plan.

Builders and remodelers are ready to support the growing trend. Want or need to stay put? The number of certified aging-in-place specialists who help older folks remain safely at home has more than doubled to nearly 5,000 since 2008. And the construction of new houses has started to get off the ground again.

Some builders have begun offering two master suites, a den or family room that can be converted into a bedroom and bathroom on the first floor, and other "bonus areas" with flexible space that can change with family needs. A two-car garage might shrink to one car and the extra area morph into living space for a grandparent or boomerang kid. Builders and remodelers are offering universal design features (wider hallways and doors, good lighting, few or no steps) that work for a baby stroller or a wheelchair. Some builders are installing infrastructure for future bathroom grab bars and stacking closets for down-the-road elevators.

Next Gen's concept is two houses in one: The main home has three or four bedrooms, and there's an attached unit with its own front entrance, kitchen, bedroom, living space and garage. Perfect for an aging parent (or lucky nanny or guest, or as a man cave), it's typically one-fifth the size of the main house. An adjoining inner door can be left open so the house can be one big home or, when closed, two residences.

Last November, Tom Moser, 60, a financial planner, and his wife, Kristin, 56, a registered nurse, moved into a Next Gen home in Marana, Ariz., with Tom's dad, Lee, 82, a widower, who had lived 20 miles away. Tom had worried because night driving was becoming a concern for Lee and he "was kind of housebound."

Tom's sister Diane Weeks, 58, and brother-in-law, Wes, 57, along with Wes' parents, have moved next door into another Next Gen home; their son, his wife and baby lived there for a while, too. Tom's mother-in-law, Susan Liem, 81, just bought the house on Moser's other side. "Everyone has separate space. We're not stepping on each other," he says. "This is my dream of being able to care for one another, but not do it alone."

Tom has his own elder care plan: "When I'm 80, I know exactly where my wife and I are moving: right into my father's place. Hopefully, my son or daughter [now 23 and 26] will slide into my place."

Multigenerational setups were common during the Great Depression but declined once people began to rebound economically. Now, as John Graham, coauthor of Together Again: A Creative Guide to Successful Multigenerational Living, observes, the recent recession has prompted a move back from valuing independence to interdependence.

Jason Ng, 38, his girlfriend, Jamie Sonoda, 30, and their 20-month-old baby, Addison, live in a home he and his parents rebuilt on their property in Aiea, Hawaii. His mother, Karen, 64, has dubbed the den "the nest," because she and her husband, Melvin, 69, have private space to watch TV. The two couples split bills equally: mortgage, utilities and groceries. Karen and Melvin adore caring for their granddaughter during the week when Jason and Jamie are at work, and don't charge the new parents.

But the multigenerational housing scenario is not so rosy for everyone. Family friction, strain on spouses, and less opportunity for work and personal time are very real concerns.

Kris Radjewski's 92-year-old mother-in-law has lived with her, Kris' husband, Ed, 55, and their 14-year-old daughter, Lexi, in Lake Hopatcong, N.J., for 13 years. The elder Mrs. Radjewski has taken over the family room in the basement, where Kris' older daughter, now away at school, would entertain friends. Now Lexi feels she has no space for hers. "She's fed up and wants her life back," says Kris, 50. "My daughter needs her mom, and I'm either working or taking care of Grandma."

Ofelia Ramirez, 37, a housecleaner from Kyle, Texas, can relate. She has the 24/7 company of her husband, 42, her children, ages 16, 14, 7 and 6, and her 80-year-old mother-in-law. "The kids like having her around and we get to share a lot of memories," says Ramirez. The downside is unsolicited advice about how to raise her children and feeling she can't have their own friends over for dinner. And yet, on days her mother-in-law is not around, "it feels like somebody is missing."

Lewis, who owns two knitting shops, says her parents (her dad died in 2001) were incredibly helpful when she was raising her kids, dealing with a failing first marriage and then dating her future husband. "But the dynamic has changed a lot over the years. You can't look at this as an equal relationship," she says. "It's OK. It's my time to take care of her. I have to remember the good times. I don't want to see her in a nursing home."

Sally Abrahms writes about aging and boomers. She is based in Boston.