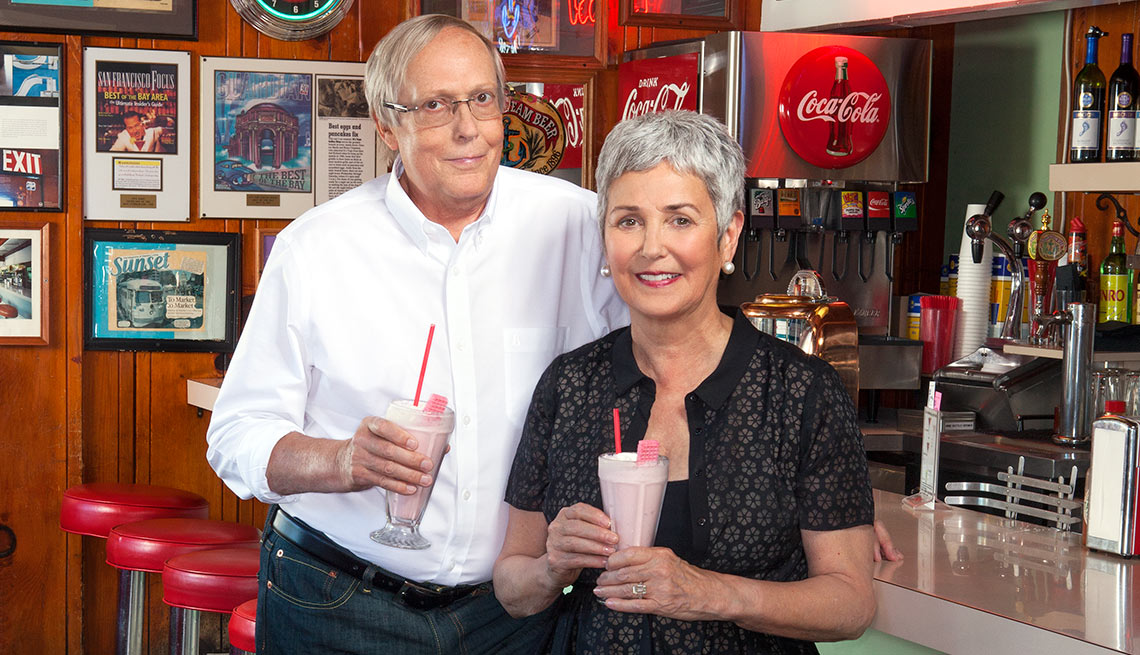 Lifelong friends, Marvin Ugland and Diane Nerheim were brought together by their respective mothers.

Who hasn't wondered what might happen if an old flame found his or her way back into your life? What might have been if that onetime relationship hadn't ended, or what might transpire if you reconnected once again? Maybe you've already reconnected with a college boyfriend on Facebook, or Googled that girl from high school on whom you had a maddening crush. For many of us, that's the stuff of fantasy. But for some, reconnecting with a former flame can be a familiar and comfortable way to find lasting love. And such matches are becoming increasingly common, thanks to the explosion of social media.

A 2015 study by the Pew Research Center found that more than half of Internet users over 50 are on Facebook and that finding people from their past is among their top reasons for logging on. Just how many of those old friends turn into new partners is harder to pinpoint.

Join the discussion: Talk openly with other folks about love, sex and relationships

But however long-lost loves reunite — a social site, a dating site, a phone call, a note or even a chance meeting at a reunion or a funeral — there's an allure in rekindling a simmering flame.

"Shared history brings a comfort we especially want as we get older," says psychologist Stan Tatkin, author of Your Brain on Love. "People from our past often have a unique and appealing perspective on us — and we on them. That can make for a very good match."

Meet four couples whose liaisons picked up decades after they left off. 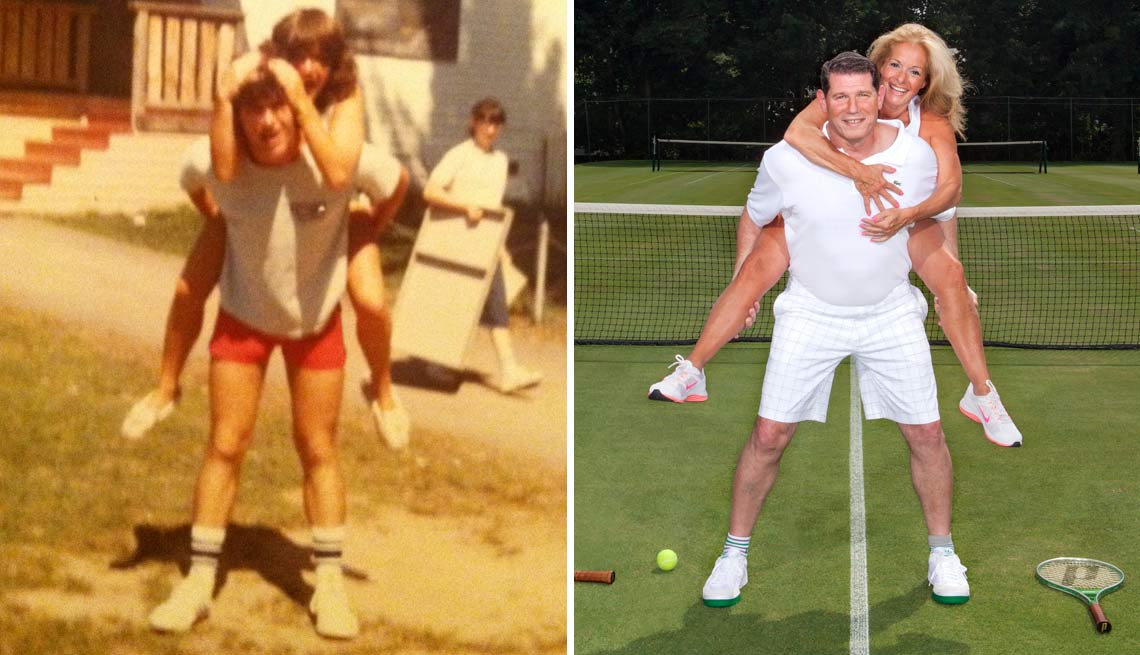 She wasn't thinking romance. Not really. When Debby Klein agreed to have dinner four years ago with her old buddy Jeff Stiel, she was unclear if it was a date or just two old camp-counselor friends getting together at the urging of a mutual friend. Dating wasn't high on Debby's priority list; she had recently ended a long relationship that followed her divorce.

But that all changed after she and Jeff talked until they closed down a New Jersey restaurant near their homes. Debby realized that in addition to their camp and college connections, she and Jeff shared "a special bond that comes from the same place." Literally, that's Queens. Plus, both are jocks: Debby, 53, is a personal trainer, and mortgage financier Jeff, 54, competes in basketball and softball leagues; they also play tennis together. The couple connected on a deeper level, too — all four of their parents are Holocaust survivors. "We speak the same language," she says. Sometimes that's Yiddish. "When I'm with Jeff, words I haven't used for 40 years pop into my head."

Back when they were still just college friends in Queens, Jeff got Debby her job at Camp Hillel in Swan Lake, N.Y. He had a crush on her, but Debby was dating another young man. "There was definitely an attraction," Debby recalls, "but Jeff was emotionally intense. Whatever didn't work then totally works now."

It didn't take him long to see that. By their second date four years ago, he once again knew he wanted more than friendship. Now he sees them as a natural match, enhanced by the mutual admiration among their seven teenage and young-adult kids.

There was one place Jeff and Debby always were good partners—on the tennis court. So their 2014 wedding invitation featured a 1981 photo taken after the pair won a highly competitive mixed-doubles camp tennis tournament. In the photo, Debby is jumping on Jeff's back.

In her wedding toast to Jeff, she joked, "What? You and me? Seriously?" Then she answered her own question: "I'm very glad I kept an open mind." 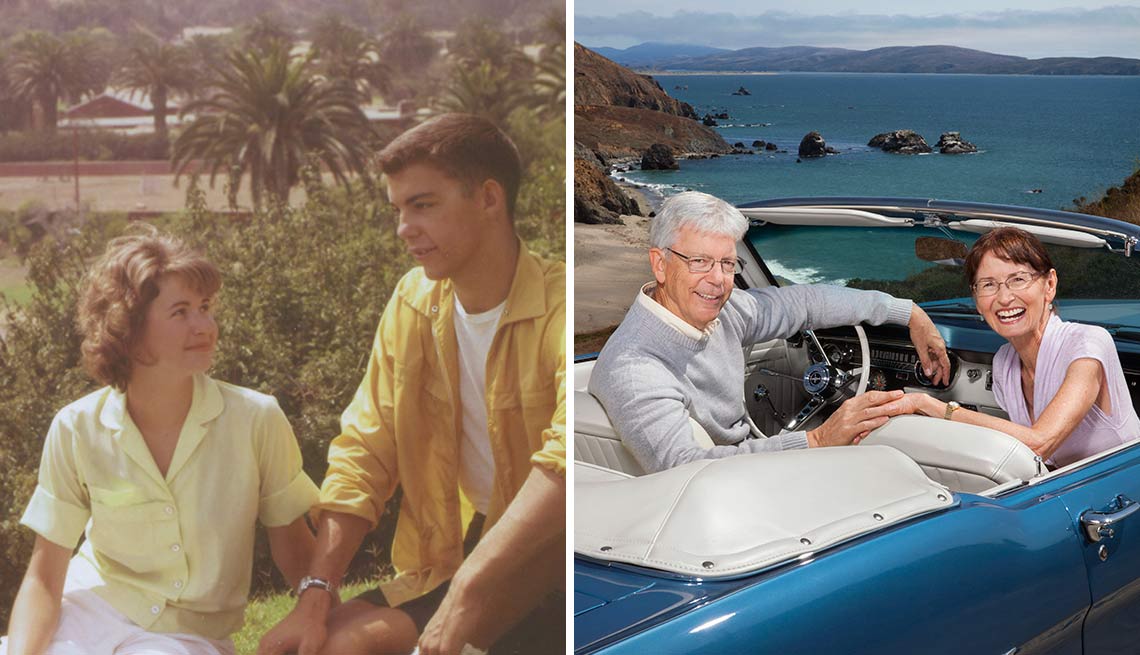 Janice Rude and Prentiss Willson were star-crossed from college

Here's how Prentiss Willson remembers the first time he saw Janice Rude: "She was working the breakfast shift at the cafeteria at Occidental College, where we were both students. She was a year ahead of me — and beautiful." He was always early to meals — it's just his way — so he would see her there.

Then Janice surprised Prentiss with a gutsy move. When she didn't see him for the college's pre-Thanksgiving dinner, she sent a friend after him. The day after Thanksgiving, Janice drove 150 miles to Santa Maria, Calif., to knock on his door. "My mom was immediately enchanted," Prentiss says. "As was I." A 1962 newspaper clipping reported their engagement, noting that the wedding date was "undetermined."

But parental disapproval got in the way. Janice says her father said, "Stop seeing that boy, or I'll cut off your tuition — and you damn well better listen to me." As Janice explains, "The Willsons were East Coast people with important careers. My father was a street-smart rough guy who didn't think intellectual knowledge was worth anything." Janice's mother's support notwithstanding, the young lovers were unable to make it work. Janice returned the ring.

Prentiss went on to graduate from Harvard Law School and practice in the San Francisco Bay Area. Janice moved to Los Angeles and eventually to Reno, Nevada, to run her family's diving board business. Over 47 years, each married and divorced multiple times.

Their paths crossed occasionally through friends. And once, when both were single, they even talked about getting back together. "I was an idiot [for not rekindling the romance at that time]," Prentiss says. "After that," Janice says, "I tried to stop thinking about him." But in 2010 she decided to give it one last go. She accepted his brunch invitation "to see if the spark was there. I told my daughter, 'This might be goodbye forever.'"

Not a chance. When Janice walked into San Francisco's Cliff House for that last-ditch date, Prentiss says, "I told her, 'You're wearing the same color slacks you wore to Thanksgiving in 1961.' We took a walk overlooking the Pacific, and I asked if I could kiss her." Six months later, they became re-engaged. In 2012 they married at Occidental College. When their mothers, who'd never met, died within months of each other, the couple discovered that both moms had saved the original engagement announcement. "They got that we couldn't find unconditional love with anyone else," Prentiss says. "We lament every day that we missed being together. That's about 17,500 days — but who's counting?"

Now retired and in their 70s, they've made their home in Yountville in the Napa Valley. "We feel like we're 18 again," Janice says, "blissfully in love." 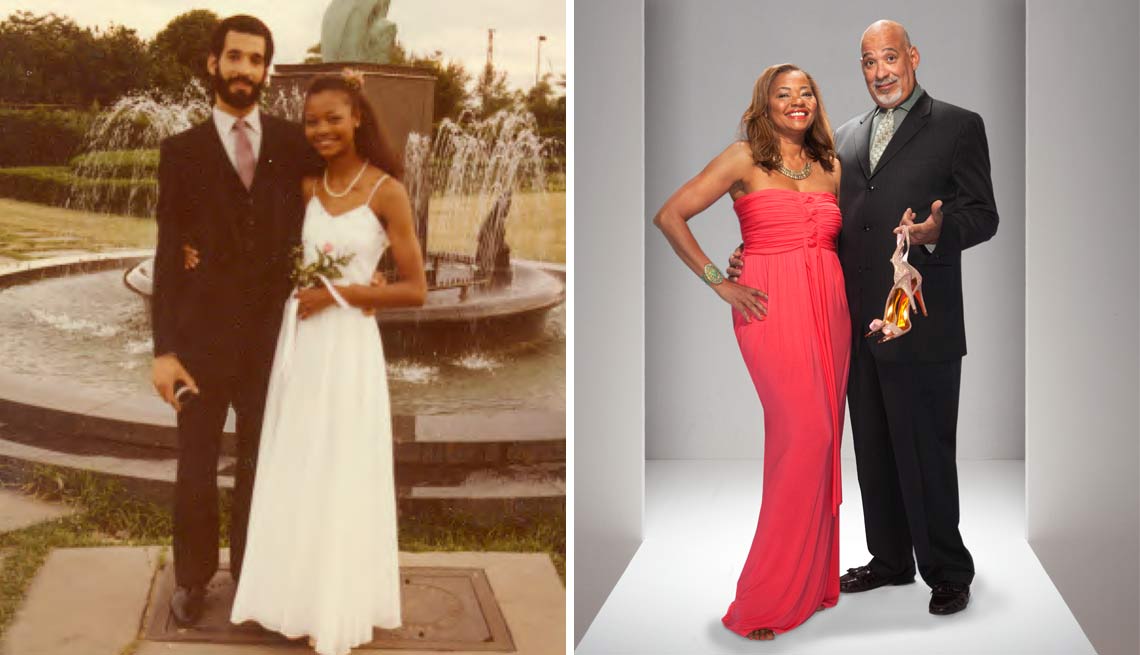 Gayle King and Frank Edwards reunited after a painful breakup

Calling for a Second Chance

Reconnected: February 2011, at a French restaurant in Chicago

When Frank Edwards first laid eyes on Gayle King (not to be confused with the CBS anchor and Oprah BFF with the same name) at a friend's apartment in Chicago, his reaction was wow. "She stopped by in a green coat and a beret, and I remember thinking,This woman is special." They hit it off that night in 1978, with Gayle appreciating his 6-foot-4-inch height: "At 5-foot-10, I'd always found it difficult to find a boyfriend who was taller than I am."

Their romance flourished, but after seven years, as Gayle hit her mid-30s, she began to worry that her biological clock was winding down. "I gave Frank the old ultimatum," she recalls. "When he wasn't ready [for a commitment], I lost faith in the relationship and finally ended it."

It was a painful breakup for them both. Nonetheless, she met another man, married and had a daughter. Frank, true to form, stayed single — and, through mutual friends, kept tabs on Gayle, "the best girlfriend I ever had." When he heard she had divorced in 2011, he invited her to lunch, he says, and "came loaded for bear, in a limo, with flowers." He traces his eagerness to a 2003 health trauma that landed him in a coma for three days: "Once you almost die, you realize what's really important. I was a fool to have let Gayle go."

They've been a couple ever since that lunch, though they maintain separate homes. "We have responsibilities to other people," explains Gayle, now 60. Frank, 62, is raising his 13-year-old nephew, and Gayle's daughter fell ill with a condition requiring extensive therapy. The couple manages to get together about three times a week.

"I can't give anybody advice," Frank says, "except to say that if life offers you a second chance, be willing to take it. Our lives are hard, but our relationship is easy." Finding Each Other at a Funeral

Dated: 1964, at the University of North Dakota

In a strange way, it was their mothers — lifelong friends — who brought Diane Nerheim and Marvin Ugland together, although neither mom lived to see them reunited.

Marv was married when he escorted his own mother to Diane's mother's funeral in Grand Forks, N.D., but he noticed that Diane — a former beauty queen — was just "as gorgeous and classy" as she'd been 50 years earlier, when they'd dated at the University of North Dakota. Thoughtful, too: When Marv's mother died a few months later, Diane sent her condolences. She did so again soon afterward, when his wife suddenly died.

Not long after that, Marv, a retired dentist, visited the website for Diane's business, Needlepoint Inc., and discovered she would be conducting a workshop at the historic Grand Hotel on Mackinac Island, Mich. He knew she was single but had no idea if she had a significant other. Still, he thought, I might as well take a shot. "I was 70 and didn't have time to mess around. I decided to drive 800 miles — from Fargo, N.D., to upper Michigan — to see her."

The evening he arrived, Diane and Marv dined on the romantic hotel's porch, where he spoke from his heart: "Here's the deal," he told her. "You're the woman by whom I've judged all others. I'm looking for someone to be my companion and have fun. If you're interested, that would be wonderful."

As they sipped Irish coffee in the Michigan twilight the next evening, Diane, who was living in San Francisco, confessed that she'd been weighing his offer. "How would you like to go to New York for Christmas and Paris for New Year's?" she proposed.

Not only did they take that trip, they also visited Italy for Marv's birthday that March. On April 4, 2015, they were married aboard a yacht in the San Francisco harbor.

"It feels like magic," Marv says. "Diane remembered all the dates we'd been on, plus 'our' song by Buck Owens, 'Love's Gonna Live Here.'"

"I used to say I'd never remarry," she allows. "After my divorce, I found most men too needy. Not Marv — he cooks, loves entertaining, and we laugh all the time and have a trust that's wonderful. One of us starts talking, and the other finishes the sentence."

Learn why taking a romantic vacation can help reignite the spark in your relationship.