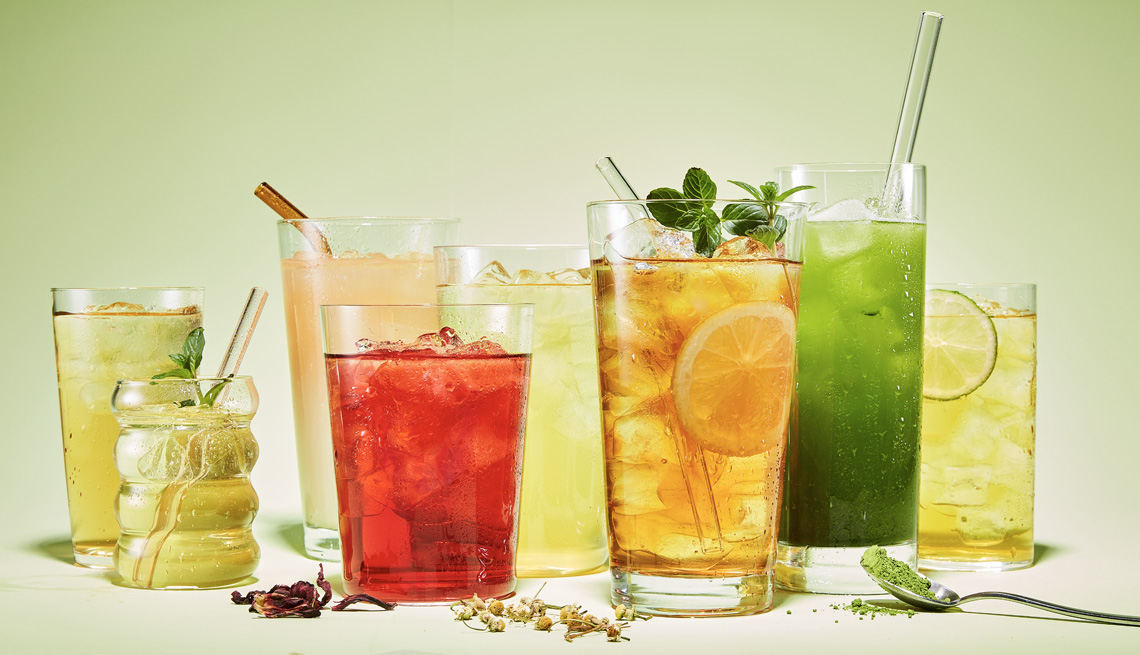 Three fast reasons to brew your own iced tea, rather than buy bottled: It’s cheaper. You’ll likely add much less sugar. And it’s healthier. Bottled teas contain far fewer polyphenols than fresh-brewed tea, studies show. And you want lots of polyphenols — antioxidants that protect the body’s tissues against free radicals, which are unstable molecules that can increase the risk of illnesses such as coronary heart disease and cancer. Then there’s reason number four: You can choose the exact tea you want. We asked registered dietitian-nutritionist Janette Marsac to weigh in on the most common varieties.

A great substitute for coffee if you want the benefits of caffeine. It contains the most of any steeped tea — 47 milligrams in 1 cup, about half the amount in a cup of joe — and it’s a rich source of theaflavins, which may help lower blood cholesterol.

How to Chill Your Tea

All tea can be turned into iced tea.

It retains more disease-fighting compounds than black tea because of its air-drying process, which results in less oxidation. Green tea may also boost metabolism and improve insulin sensitivity, research suggests. Plus, it contains 29 milligrams of caffeine per cup.

A traditional Chinese tea, with a flavor that can range from light and fruity to bold and earthy. It has 38 milligrams of caffeine per cup, and its antioxidants are similar to those in green and black tea.

Made from whole green tea leaves ground into a fine powder, then mixed with hot water. It has about three times more antioxidants than green tea does, plus more caffeine — about 70 milligrams for 1 cup of tea made with 1 teaspoon of powder. (The caffeine content is higher than for steeped teas because you’re consuming the tea leaves.)

A black tea infused with a variety of spices, such as cardamom, black pepper, ginger, cloves, cinnamon, nutmeg, mace and star anise. All these spices enhance the tea’s antioxidant and anti-inflammatory properties. It’s traditionally brewed with whole milk and sugar.

Harvested as buds rather than leaves, it’s the least processed of the true teas, retaining a high level of antioxidants. It generally has less caffeine than green or black tea and has a lighter taste. In addition, white tea has oral health benefits, including plaque prevention (and it won’t stain teeth).

Made of dried hibiscus flowers, from a shrub that grows in tropical regions worldwide. Slightly sour, fruity and hot pink, this caffeine-free tea contains high levels of antioxidants. Sip with caution, though: Too much hibiscus can have a laxative effect.

Sweet tea is a staple in the South, but the high sugar content cancels out the tea’s health benefits, says nutritionist Janette Marsac. Instead of going cold turkey — unsweetened tea can seem bland if you’re used to the sugar — cut back in increments, decreasing by 1 teaspoon of sugar, or diluting the tea with water, each week. Another option: Flavor unsweetened black tea with a lemon wedge; green, oolong or black tea with a few fresh mint leaves; or white tea with a single basil leaf. Marsac also recommends adding iced tea to a water bottle with an infusion chamber (you can fill it with fresh halved strawberries or peach slices to add flavor) or freezing diced fruit into ice cubes, to slowly flavor tea as they melt.

Tea may not have the caffeine levels of coffee, but too much can still cause increased anxiety, trouble sleeping and heartburn, Marsac points out. Tannins in tea may also block iron absorption, if you drink a lot. New to the tea ritual? Marsac advises starting with one 8-ounce cup per day to see how you respond.

Kelsey Ogletree writes on food for Bon Appétit and Shape.