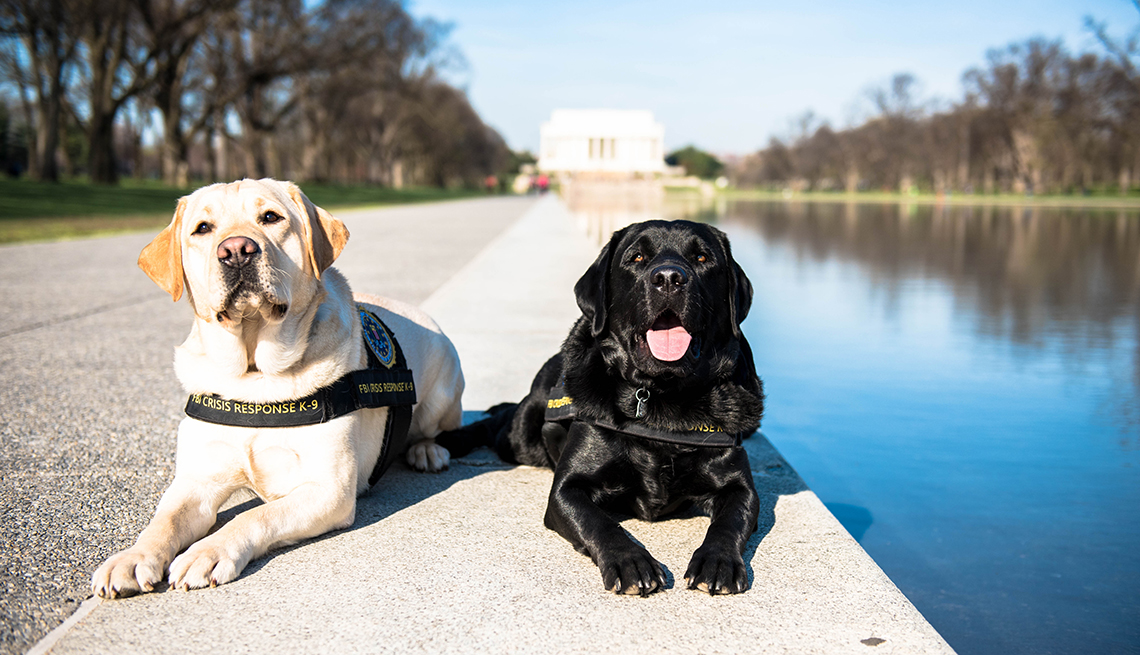 En español | Who knew the FBI has a pair of 6-year-olds on call?

Wally and Gio are furry, four-legged creatures who jump into duty once outfitted in their FBI K-9 vests. The crisis-response canines have soothed victims and witnesses at crime scenes — including the San Bernardino, California, terror attacks in 2015; the Pulse nightclub shootings in Orlando, Florida in 2016; and the Las Vegas music festival shootings in 2017.

Both male English Labradors, the pair are the bureau's first and only crisis-response dogs. On board since 2015, the Labs work to soothe victims physically or emotionally wounded at mass casualties and give comfort to the families of the dead. The pooches also befriend FBI agents, evidence technicians and other first responders, giving them moments of down time during long hours probing crimes and taking statements from witnesses.

Gio is black. Wally is yellow. Born six months apart, the animals’ personalities are as different as night and day, their handlers say.

Wally, who is younger, was born on May 5, which is Cinco de Mayo, and he is an extroverted party animal who never tires of fetching tennis balls.

Gio is the mellower of the two. “Your little cuddle bunny,” says Melody Tiddle, an FBI analyst and the dog's handler. “You may get a few ball tosses out of him, but other than that, he just kind of wants to sit under you while you're petting him." 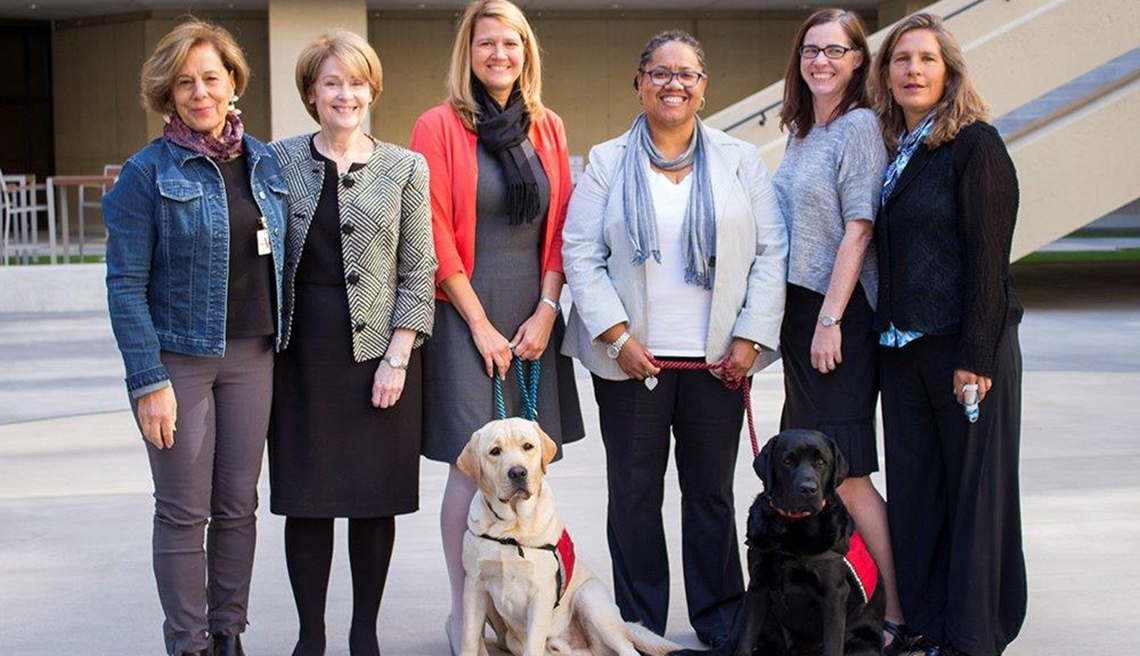 When not at crime scenes, the dogs pad around FBI headquarters in Washington and train in its private courtyard. Off duty, they live with their handlers, Tiddle and Staci Beers, and come across as family pets — that is, if your pet grew up learning to obey 90 non-negotiable commands. Beers is also the FBI's Victim Services coordinator.

What's in a name?

Gio is short for Giovanni, the given name of St. Francis of Assisi, the Italian Catholic friar and patron saint of animals. The name was chosen because Gio was born on Oct. 4, the saint's feast day.

Wally is short for “Walrus.” He hails from a line of dogs named after the Beatles and their hits.

Tiddle and Beers spoke to AARP in a phone interview and later in a Zoom video chat, which also drew the dogs. During the chat, Wally sunbathed and enjoyed being petted and stroked by Beers. Gio was splayed on a rear deck, inhaling the scents of summer with his turbocharged nose. Neither barked once during the 15-minute chat.

The dogs trained at the nonprofit Assistance Dogs of the West (ADW) in Santa Fe, New Mexico, which has prepared more than 500 service dogs since its creation in 1995.

Founder Jill Felice, 59, its senior vice president for programming, says she prefers to start training puppies even when they are days old, but no later than 10 weeks. It takes 18 to 24 months to train what she calls a “purpose-bred” dog, and graduates perform roles including accompanying children on the witness stand as they testify in court. Other dogs assist people with health issues such as autism, seizures, diabetes, quadriplegia and post-traumatic stress. 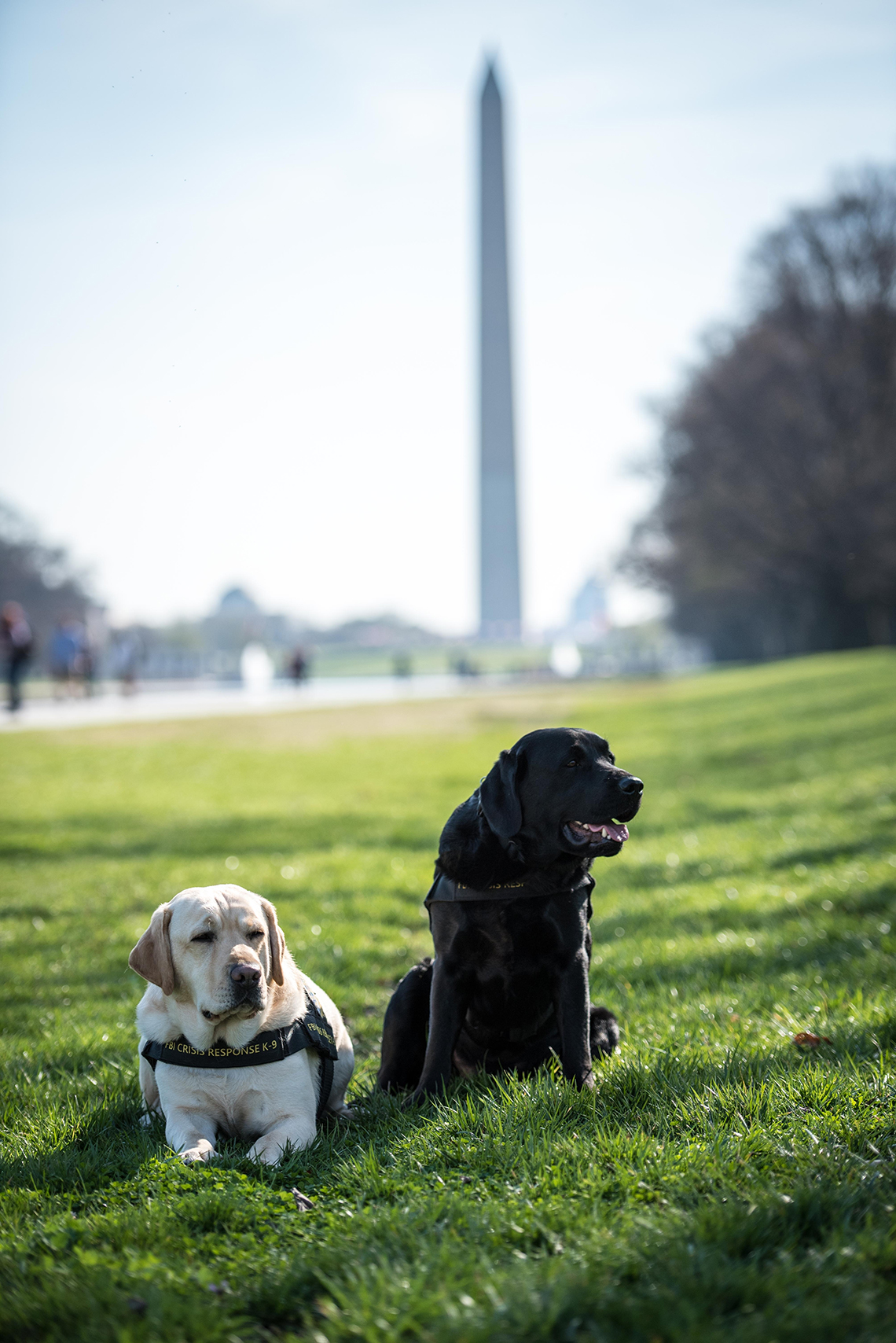 Labrador Retrievers have been the most popular breed of dogs in the U.S. since 1991, based on American Kennel Club registrations. Felice favors them for her program because of their emotional and cognitive intelligence, sociability, loyalty and willingness to be trained. “They're truly interested in humans and the jobs that we do,” she observes, even if it's just emptying a dishwasher.

Crisis-response dogs need a calm, resilient, flexible and adaptable temperament. They can't freak out at loud noises such as emergency sirens. Felice fondly remembers a day she spent training with Gio before he left for the FBI. It began with a morning hike in New Mexico, and about 12 hours later they hit New York City to acclimate him to travel.

"He was just like, ‘Whatever,’ and he didn't care if we were on a plane, a taxi or a train, or on foot on the trails,” says Felice, who reports a surge in demand for crisis-response and courthouse dogs. Even the FBI is considering bringing on more of these dogs, Tiddle says.

Perks of the job

The dogs’ workaday life has perks. And rules. And a predictive age of retirement. When deployed, the Labs fly commercial or aboard FBI aircraft. They get a variety of treats but never any food from strangers, since the handlers aim to keep the dogs’ weight to 75 pounds. Their diets include turkey-and-sweet-potato kibble, apples, green beans and spinach.

According to Felice, crisis-response dogs generally work until age 8; some work half-time after that. Beers and Tiddle say they'll adopt the dogs once they've hung up their FBI vests.

So far Wally and Gio have accompanied FBI personnel as they visit victims in intensive-care units, make death notifications and return the personal effects of deceased victims to families. The dogs never are forced on people, as some fear dogs or suffer from allergies; the handlers let people who are interested engage with the animals. 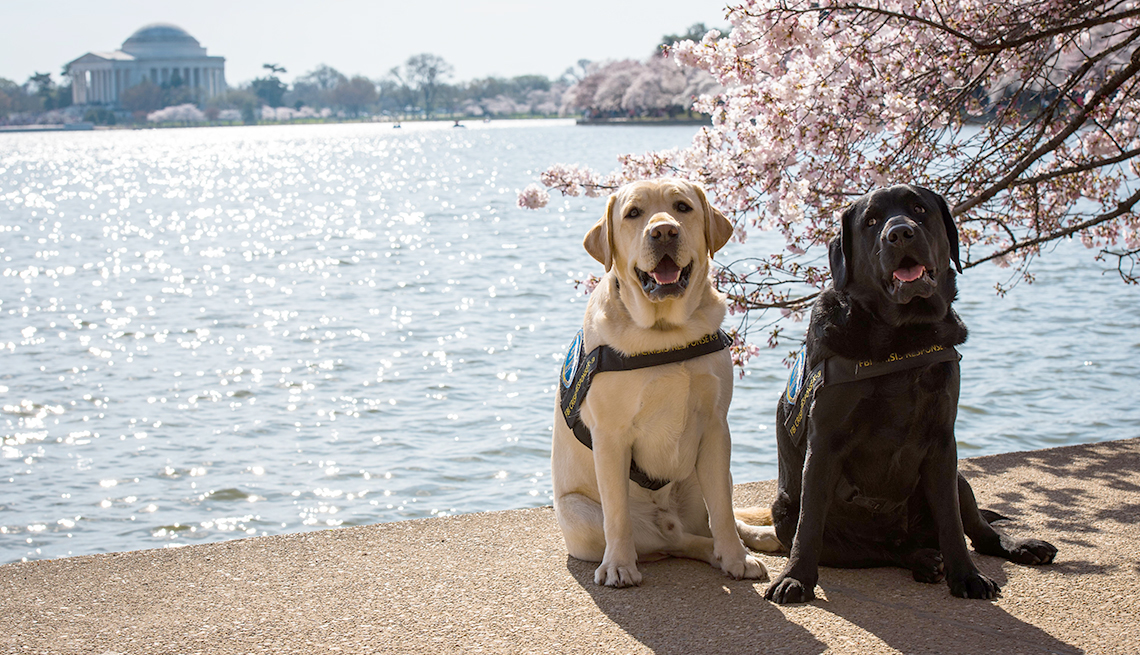 Beers, a licensed social worker who has helped victims for 28 years, says having Wally and Gio has been a game changer. “The love they give victims is powerful,” she says. “I cannot say enough about the impact that both of these guys have made in the lives of people who experience trauma and tragedy."

Tiddle recalls a school shooting that left a young woman who witnessed the carnage so traumatized that she did not want to leave her bedroom. But when the young woman arrived at a Family Assistance Center set up for victims, she “zoomed in on Gio,” got on the floor and — seated with the dog — opened up to a counselor. Day after day she returned for therapy, with Gio at her side.

"When you're interacting with a dog, it really brings you to the here and now,” Tiddle observes. “So it kind of takes you out of your head. And that's the magic."