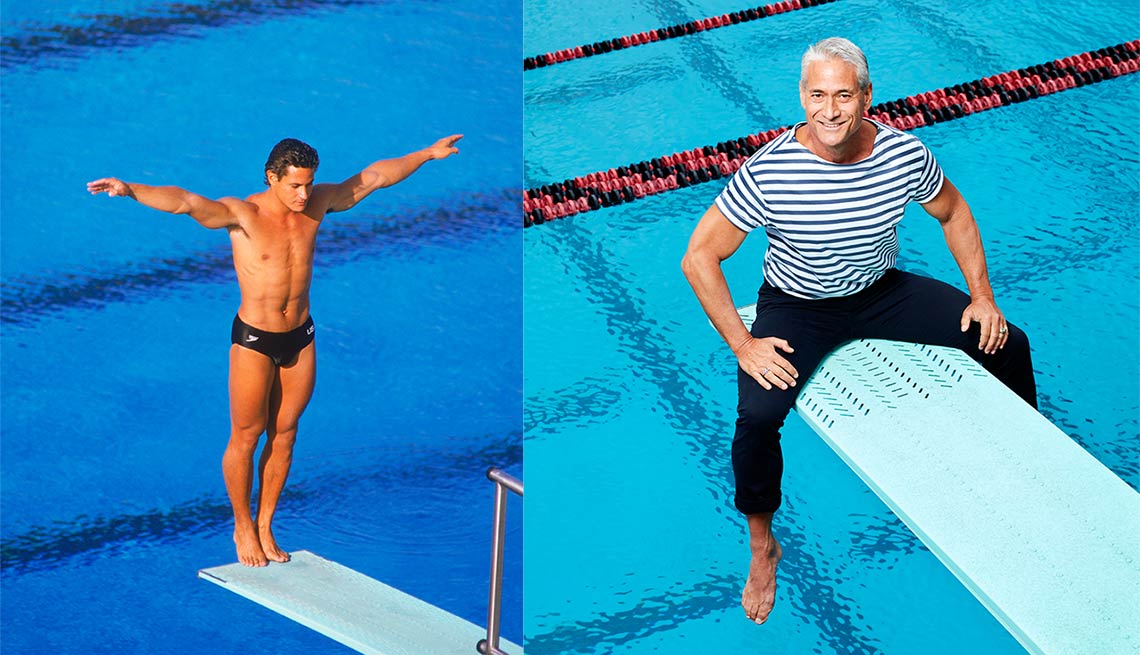 En español |As the host city of Rio de Janeiro prepares for the 2016 Summer Olympic Games Aug. 5-21, we catch up with some of the most competitive, accomplished and popular gold medalists who provided us with thrilling moments and triumphs to celebrate from Olympics past. These remarkable former Olympians share with the Bulletin their most cherished memories of the games, and reveal what they do to stay in shape and retain their vitality.

Six months prior to the 1988 Seoul Olympic Games, Greg Louganis was diagnosed as HIV positive. He decided to keep his diagnosis secret.

"I felt like I was living on an island. That is what secrets do — they isolate you," says Louganis, whose best-selling book Breaking the Surface in 1996 detailed his struggles as an HIV-infected superstar gay athlete. "At the time, we thought of HIV as a death sentence."

In the 3-meter springboard preliminaries, he banged his head on the board and suffered a cut that required stitches and left him with a mild concussion. "In that split second when I hit my head on the board, I became the underdog," Louganis says.

He went on to win the 3-meter finals. Then, trailing a 14-year-old Chinese athlete, Louganis, 28, rallied in his final 10-meter platform dive and won by a scant 1.14 points. His two gold medals from Seoul would duplicate his accomplishment from the 1984 Los Angeles Games. "It was emotional," Louganis says of his triumphant comeback.

At his wedding some years later, the diving sensation gave his 10-meter gold medal to his coach, Ron O'Brien. "We were so in sync," Louganis says. "I am a firm believer that you don't achieve greatness on your own."

These days, Louganis rises at 4 a.m. and finishes his daily yoga and spin workouts by 7. "I am now getting into CrossFit-like station training with weights," he says. "With exercise, sometimes it is harder to get motivated, but you feel so much better afterward."

Louganis usually finds himself near a pool only when he is mentoring young divers. On occasion, when he attends an event, someone will ask him to dive. "I always have a good excuse — 'Oh, I left my bathing suit at home!' " he says. "That's kind of a nice way out of it." 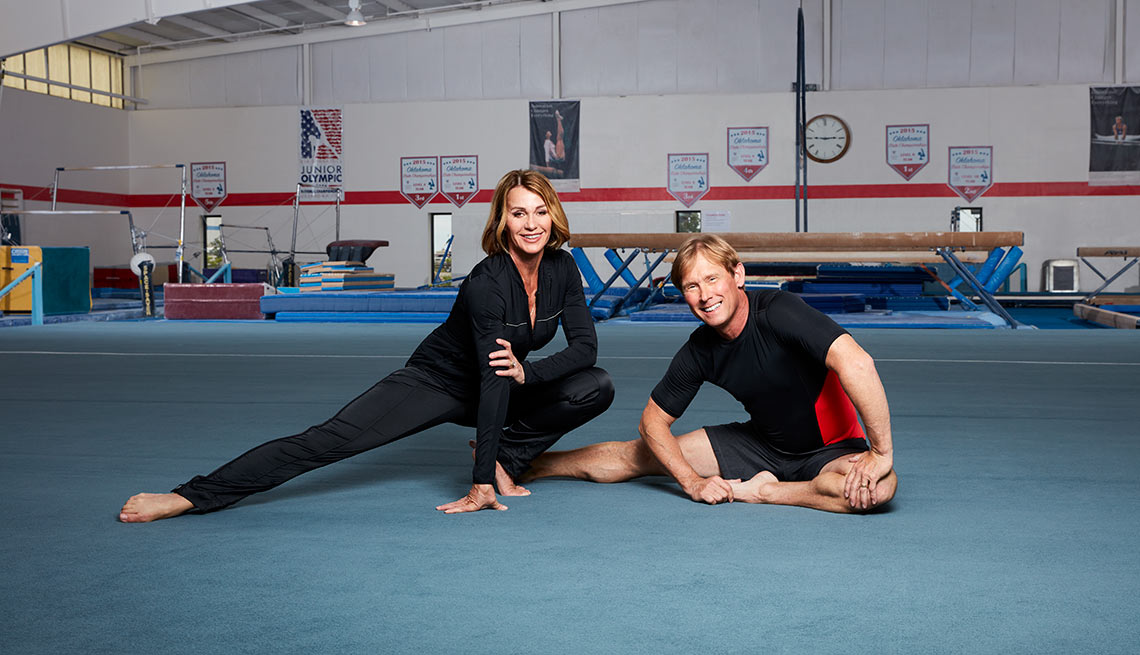 When Olympic gold medalist Bart Conner listens to "The Star-Spangled Banner" these days, he is immediately transported to the 1984 Summer Olympics. "Every time I hear the national anthem, it takes me to that moment" on the victory stand in Los Angeles, says the former gymnastics champion. "Here it is 32 years later and no U.S. national anthem I've heard since sounded quite the same."

Recovering from a torn tendon in his biceps that required surgery only months before the Los Angeles Games, Conner finished first in the parallel bars with a perfect 10. "In the last [individual] routine of my life, I got a 10 and the gold medal. I thought, This is it — time to retire. It was a sweet moment," says Conner, who also won a gold medal in team competition.

Conner's perfect score was something that his wife, Nadia Comaneci, whom he married in 1996, can appreciate. At the 1976 Summer Olympics in Montreal, the pixyish gymnast scored a mind-boggling seven 10s en route to capturing three gold medals, a silver and a bronze for Romania. She was 14. Four years later, at the 1980 Moscow Games, she collected two gold and two silver medals.

"People always remember the first one," says Comaneci, who soared off the uneven parallel bars in Montreal and into Olympics history as the first gymnast to score a 10 in the games. 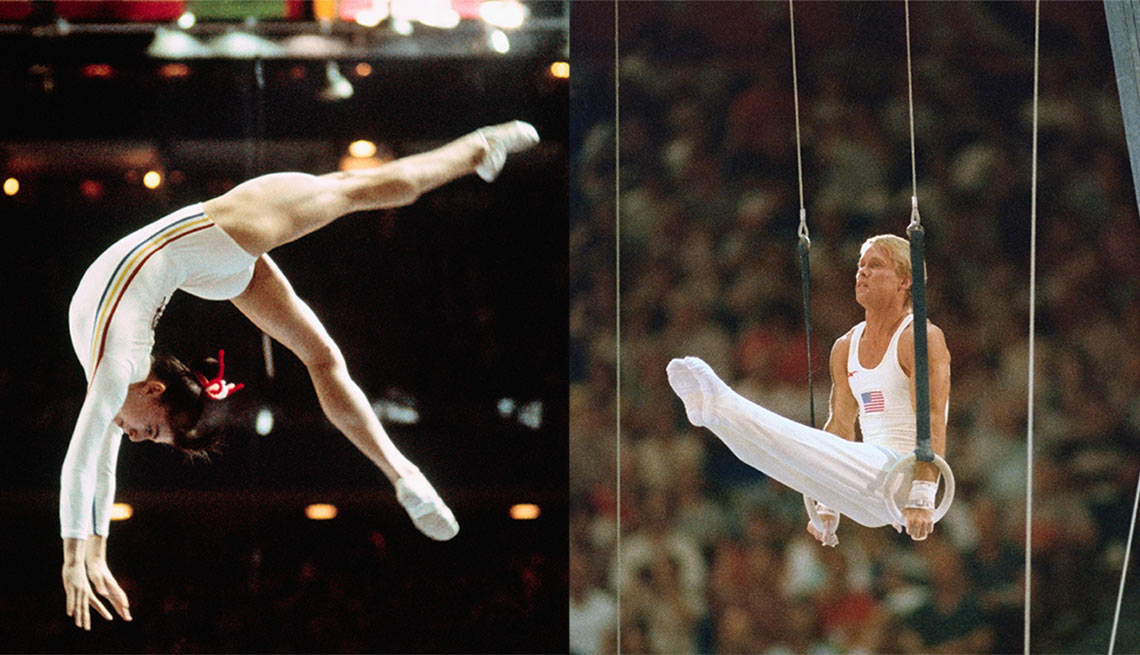 His and Her Routines

Conner and Comaneci live in Norman, Okla., home of the Bart Conner Gymnastics Academy. Conner works out five days a week doing cardio and resistance training combined with walking, running and morning stretches. "I do a mini-yoga routine. When I stretch, I think, I remember how good that feels," Conner says.

His favorite maneuver remains a move that few people attempt: "I do a headstand every day; I find it invigorating," he says. "It's my measuring stick for how I am doing physically."

Comaneci, who fled Romania for Hungary in 1989 and later defected to the U.S., enjoys the consistency of regular workouts but limits her sessions to half-hour increments three times a week. Half of her workout is dedicated to running and walking, the other half to stretching, light weights and an elliptical machine.

"I've figured out what works for me, something that I can basically do the rest of my life," she says. 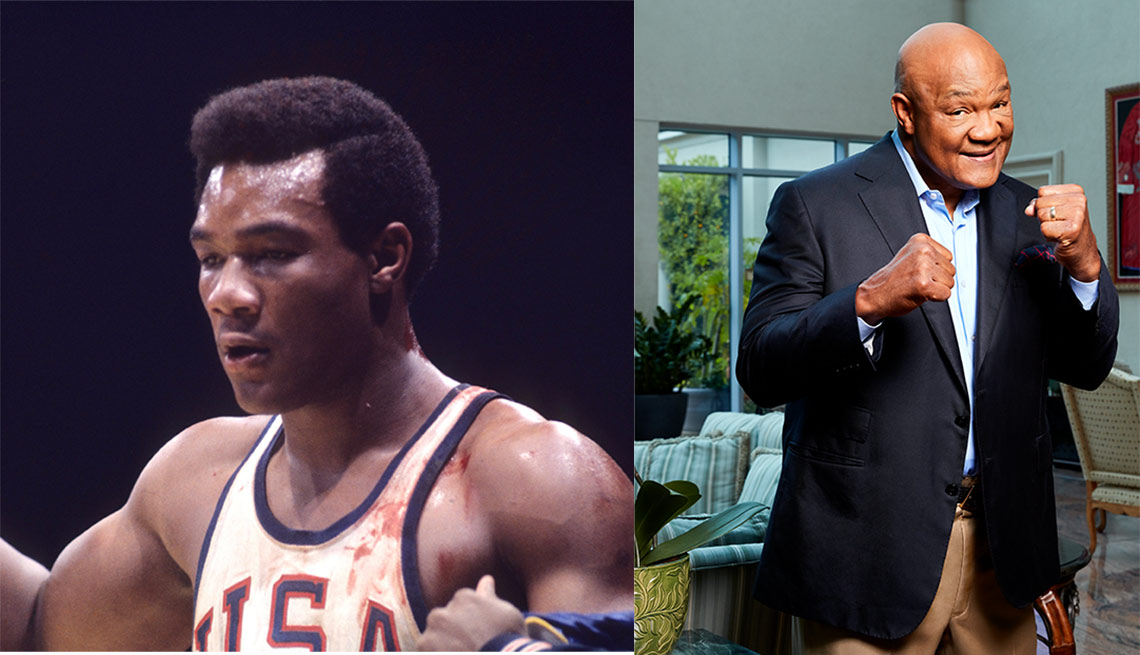 George Foreman's Olympic moment at the 1968 Mexico City Games is not remembered as much for his pulverizing of an overmatched Soviet opponent as for a controversial patriotic gesture. Within minutes of Foreman's second-round victory, the powerful Texas teenager raised a tiny U.S. flag and bowed in the ring.

"I had the small flag in my robe pocket along with lucky beads, a lucky penny and a picture of a pretty girl," Foreman says. "It had nothing to do with politics. I wasn't into that. I waved the flag to make certain people knew where I was from. I am an American. No one can take that away."

Foreman's actions in the ring fueled speculation that he had been used by International Olympic Committee officials. Earlier during the 1968 Summer Games, U.S. track stars Tommie Smith and John Carlos appeared at the medals ceremony wearing black socks, no shoes and black gloves. They lowered their heads and defiantly raised clenched fists to protest racial discrimination in America. The IOC stripped the men of their medals; U.S. Olympic officials suspended them.

"If I had a chance to do it a second time," Foreman says, "I would have waved two flags — one in each hand."

The still-imposing grandfather remains an impressive physical specimen. Foreman achieves his fitness goals by rotating different exercises at his home in Houston, which includes 3,000 square feet of exercise area. One of his favorite pieces of equipment is a treadmill-type device located at the bottom of his pool, which he uses for stretching. He also rides a recumbent bike and uses sit-up machines.

"Big George" still lifts weights to maintain his gargantuan biceps and forearms. "I didn't lose those!" says Foreman, whose one-punch knockout of Michael Moorer in 1994 made him the oldest heavyweight champion in history at 45.

"I look at this way: If I want to eat, I have to work out," Foreman says. "The only fights I have these days are walking away from dessert bars and staying away from gravy." 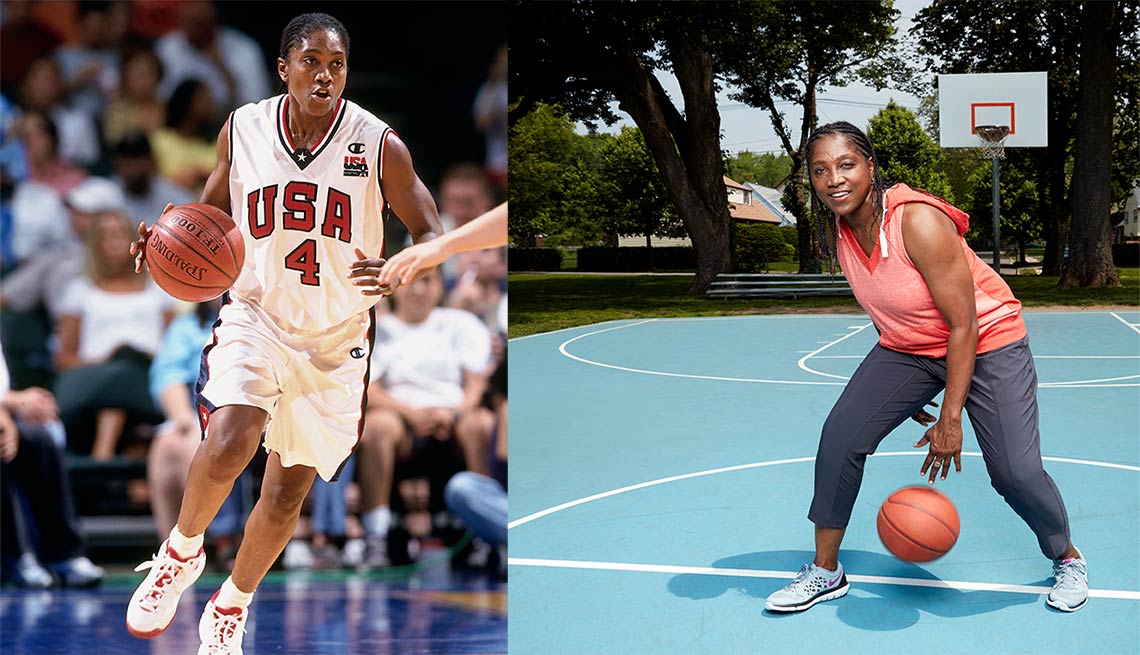 Teresa Edwards is the most admired and accomplished amateur basketball player in history, regardless of nationality or gender. In five Summer Olympics, her leadership and ultracompetitiveness helped the U.S. women's team win four gold medals, five medals in all. Her fondest Olympic reminiscence, however, was not of the court action but of a 32nd-birthday stroll through the athletes' village at the 1996 Atlanta Games with President Bill Clinton.

Edwards, born in Cairo, Ga., recalls, "We rolled with President Clinton that day. It was very special." She considers the 1996 Games "the most captivating games of my life. There also was something about that '96 team. The journey to the podium takes a lot of bonding."

"It was a blessing. I had a lot of good luck along the way," says Edwards, who won her last gold medal at age 36.

This summer, the former pro is working on a memoir and looking forward to the Summer Olympics in Rio de Janeiro. She remains physically active.

"I test my body every now and then, and I still shoot around," says Edwards, who runs steps and jumps rope. "It's hard not to be active when you are like me. If I didn't work so much, I would probably still be in the gym all day. I think the biggest difference I made in my life is recognizing what I am putting in my body. When you're young and athletic, you can pretty much eat anything." 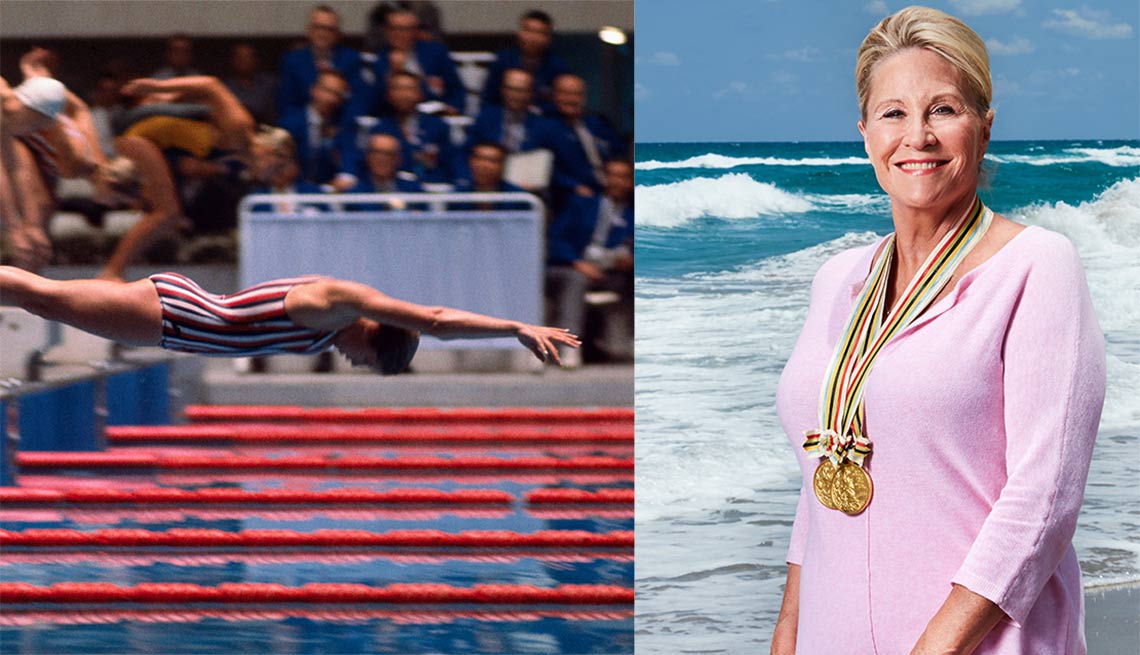 Olympic swimming great Donna de Varona remembers how the dread of potential disappointment propelled her through the water at the 1964 Tokyo Games. "The pressure was tremendous for me in the 400-meter individual medley because I already was so visible," says de Varona, who as a 17-year-old held 18 world records.

With the aid of her father, de Varona developed a prerace mantra in Japan: Try your hardest. Visualize the race. Put fear and expectation to the side. Do the best you can. "That got me over the [anxiety] of, 'My God, what if I don't win?' " she says.

Thousands of hours of practice prepared de Varona to submerge the opposition in Tokyo. In the 400-meter individual medley, she set an Olympic record, then tingled with pride on the medals stand. "There is nothing like seeing your flag go up to 'The Star-Spangled Banner,' " she says. Her real joy came when she swam for the U.S. women's record-setting 4x100 freestyle relay team."It was an exciting time for me but also very disorienting because I was only 17."

De Varona was savvy and talented, so she parlayed her Olympic achievement and fame into a career as a television sportscaster. She helped usher in new possibilities for women in sports, including the passage of Title IX.

"The Olympics experience really helped me when I went to ABC Sports as an announcer because I had traveled the journey of a champion, one under pressure."

More than five decades later, swimming remains her exercise focus. Calling it "the best exercise you can do," she swims three or four times a week.

"I've done land training, but my favorite thing is the pool. I always tell people, 'I am not a land animal!' " says de Varona, who occasionally surprises strangers with her grace in the water.

"They say, 'Wow, you have a really nice stroke. Where did you learn that?' "