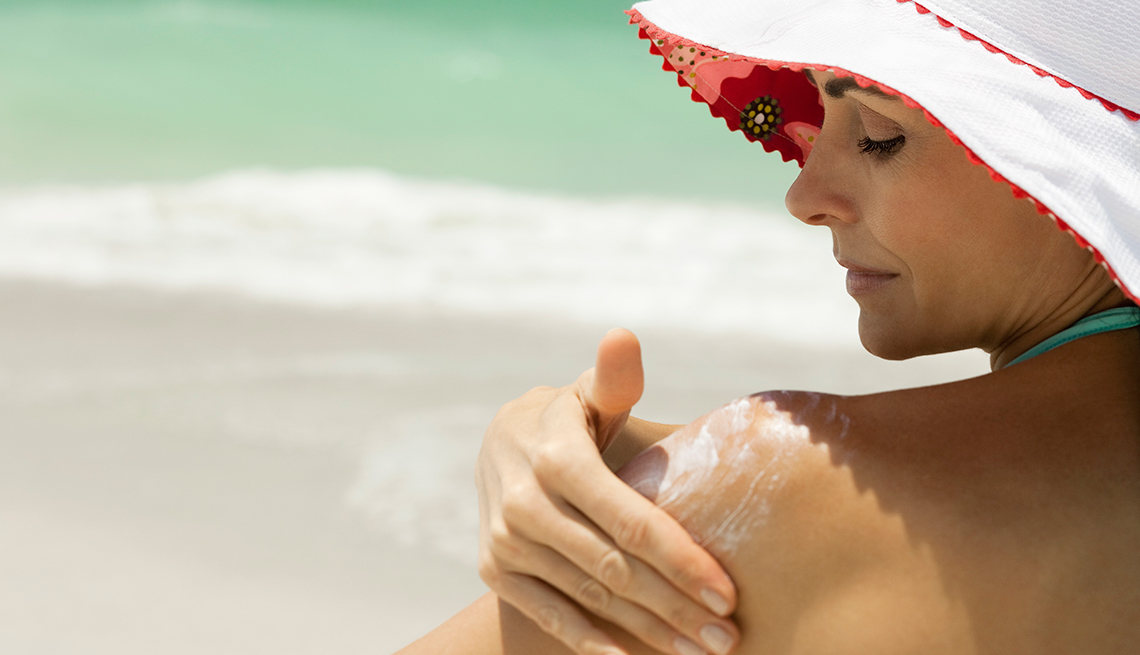 Actually, all these answers are true. Sunscreen certainly does a) and b), but despite the fact that we spend $1 billion on the stuff each year, a new Consumer Reports survey found that more than half of American adults say they usually skip using sunscreen, and among those 60 and older, that number jumps to 61 percent.

This is disturbing news, considering that the newest research finds that the rate of skin cancer increased almost eightfold between 1970 and 2009 among adults ages 40 to 60. Melanoma, the deadliest form of skin cancer, is also on the rise among boomers, particularly men, according to the National Cancer Institute.

And if that isn't enough to convince you, a major Australian study in 2013 found that daily use of sunscreen significantly slowed skin aging in healthy middle-age men and women.

In fact, the study's results were rather dramatic: Those who used a broad-spectrum sunscreen daily had no detectable increase in skin aging effects — such as wrinkling, coarser skin, age spots — after 4-1/2 years. What's more, the everyday users had 24 percent less skin aging than those who used sunscreen only occasionally.

So how do you choose the best sunscreen?

It's not always straightforward. Part of the problem may be the overwhelming number of options. There's SPF (sun protection factor) to consider, as well as spray versus lotion, name brand versus generic, and whether the growing number of moisturizers with sunscreen are really effective.

In its survey, Consumer Reports found that consumers are most influenced by SPF in deciding which sunscreen to buy. But you can't always rely on that number, says Trisha Calvo, deputy content editor for health and food at Consumer Reports. The magazine's research center tested 20 popular water-resistant sunscreens and found that only two — Bull Frog Water Armor Sport InstaCool SPF 50+ and Coppertone Sensitive Skin SPF 50 — provided the SPF protection promised on the label. The others ranged from 4 to 40 percent below what they claimed.

Still, Calvo says, even though "the ones we rated highly may not have met their SPF claims, they're still protective." The simplest rule to remember: "Any sunscreen is better than no sunscreen."

In the same vein, dermatologist Lisa Garner of Garland, Texas, encourages her patients to try different products and pick one that feels good on their skin: "Otherwise they will not use it regularly."

Because the sun's rays are strong most of the year in Texas, Garner says she spends a lot of time telling patients the importance of sunscreen and the best way to choose it. Here are some of her tips:

Although manufacturers can still sell sunscreens with an SPF that exceeds 50, it's not clear that the higher numbers are really more protective. In fact, the Food and Drug Administration is considering not allowing anything higher than 50. The sunscreen should also offer "broad spectrum protection," meaning it protects against both UVA and UVB rays, and it should be water-resistant, preferably up to 80 minutes. Products cannot claim to be waterproof, the FDA says.

If you're tanning, even while wearing sunscreen, you're not fully protected

A new British study finds that sunscreen alone can't protect skin cells from damage due to UV rays. If your skin is changing color, it means the UV rays have penetrated deeper, says Garner, a fellow of the American Academy of Dermatology. "Your skin makes a tan to try and protect itself from the sun, not to make you look better." She encourages patients to add hats and big sunglasses, and to stay in the shade for added protection.

If you're going to get sweaty, don't use moisturizers with sunscreen

More men and women are using these moisturizers with SPF, which is fine "if you have no plans to be outdoors for any significant amount of time where you will perspire," Garner says. Getting sweaty rapidly reduces the sun protection from moisturizers.

It's not one-and-done. You must reapply

Sunscreen must be reapplied every two hours when you are out in the sun. "I am always surprised that people think it lasts the whole day if they put it on in the morning," Garner says.

Don't be stingy, use two tablespoons

A dab definitely will not do you. You need about two tablespoons of sunscreen to cover your face and body. Use half that much and you get half the SPF, Consumer Reports found.

Keep spray sunscreen away from the face

Children should not use spray sunscreen, which can irritate the lungs if inhaled, and adults shouldn't spray it on their faces for the same reason. Sprays are also flammable, so stay away from the grill if you're going to spray yourself. Wait until the sunscreen is dry. "And rub it in after spraying," Garner adds, "in order to get the full SPF."

In tests of 20 popular water-resistant sunscreens, Consumer Reports rated these seven as excellent for UVA protection and at least very good for overall and UVB protection. (UVA rays are the most damaging, but both UVA and UVB contribute to skin cancer risk.) Keep in mind, a higher SPF doesn't necessarily mean more protection. An SPF 30 will block 97 percent of UV rays. After that the increases are very small, and nothing is 100 percent protective.


Candy Sagon writes about health for AARP Media. See more of her health reporting on the AARP Blog.