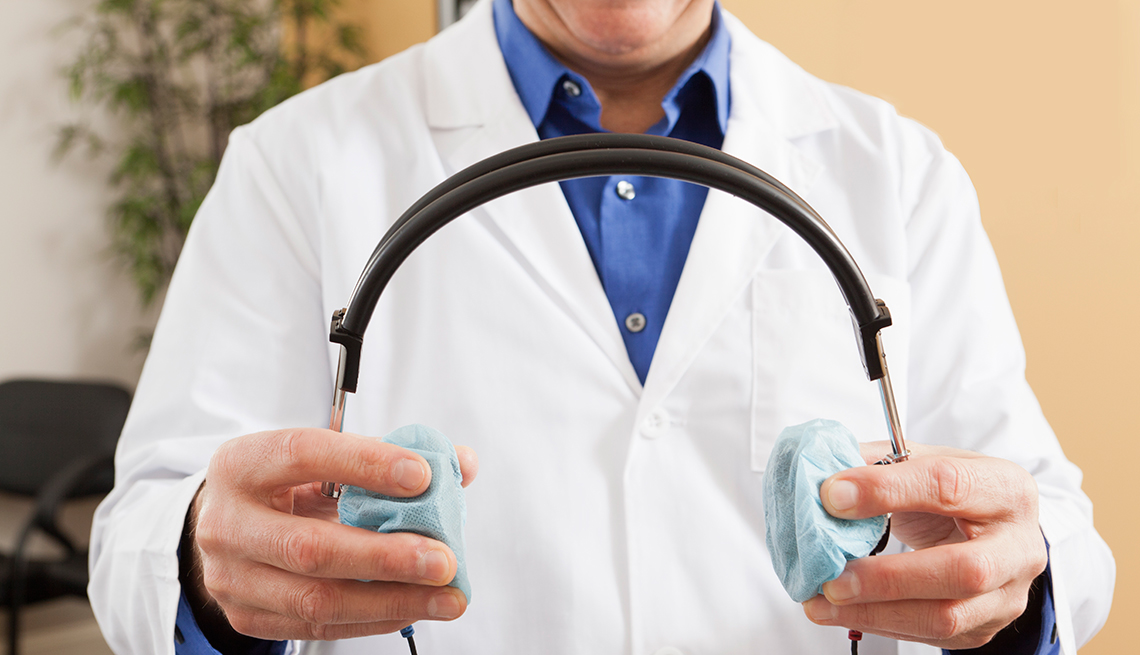 Do you hear constant ringing in your ears? See your doctor for a hearing test. Tinnitus is often the first sign of hearing loss.

En español l Do you hear constant ringing in your ears? See your doctor for a hearing test. Tinnitus is often the first sign of hearing loss.

Other than their famous voices, what do Barbra Streisand, Paul Simon and Bob Dylan have in common?

They all suffer from the phantom sounds of tinnitus, a condition that some 50 million Americans have experienced.

An estimated 14 to 16 million seek medical help for tinnitus, and it is the number one disability among veterans returning from conflict. The condition can be both maddening and debilitating. Some hear a high-pitched ringing, buzzing or clicking, in one or both ears, 24/7. For others it's a screech as loud as a chainsaw that comes and goes for no apparent reason. Still others say it's a pulsing in the ear timed to every heartbeat.

Scientists are testing several experimental brain-stimulating therapies, including transcranial magnetic stimulation, to reboot the brain by generating weak electrical currents to offset the abnormal activity that causes tinnitus. In 2016, researchers at the Karolinska Institutet in Sweden identified a gene in mice that may help prevent tinnitus. It’s a first step in finding genetic markers could lead to therapies specifically targeted to an individual.

Experts are not always sure what triggers these phantom sounds, but agree that having tinnitus signals that something has gone wrong with the auditory system.

It has been linked to a long list of conditions that may trigger or worsen the problem. By far the most common suspects are longtime exposure to excessive noise and the hundreds of drugs that harm the ear. Intriguing new research also points to changes that take place in the brain when hearing is damaged that cause random neurons to fire erratically and create "noise," in much the same way a phantom limb causes pain.

Other possible causes include ear or sinus infections, punctured eardrum, ear wax, hardening of the arteries, high blood pressure and Lyme disease. It's also linked to rare conditions, such as acoustic neuroma — a slow-growing, benign tumor that presses on the auditory nerve — and Ménière's disease, which causes fluid buildup in the inner ear. In some of these cases, the ringing and buzzing may be reversed once the underlying conditions are properly treated.

A cure remains elusive, and treatments that work for some leave others deeply disappointed "It's a process of trial and error," says Michael D. Seidman, an ear, nose and throat surgeon at Florida Hospital Celebration Health in Celebration, Fla. "We can help people manage their tinnitus by treating the underlying causes, altering their reaction to it — or both."

"Tinnitus is often the first sign of hearing loss," says Neil Bauman, director of the Center for Hearing Loss Help in Stewartstown, Pa. If you suspect a problem, get a hearing test so your doctor can pinpoint the cause. If it's earwax, he can remove it. Infection? An antibiotic can knock it out. If necessary, he can refer you to an otologist (a physician who specializes in ears), an otolaryngologist (ear, nose and throat doctor, or ENT) or an audiologist (professional who diagnoses and treats hearing-related disorders) for a full hearing test and advice on treatments.

More than 590 drugs, herbs and chemicals can trigger and are associated with tinnitus. These include over-the-counter painkillers, commonly used antibiotics, as well as drugs for heart disease, cancer and depression. Sometimes, the interactions of two or more medications can spark tinnitus. Before starting any drug, tell your doctor what you're already taking and ask about side effects. If your ears start to ring soon after taking a new medication, talk to your doctor about switching to something else or changing the dosage. For a comprehensive list of medications linked to tinnitus, download "(PDF) Prescription Medications, Over-the-Counter Drugs, Herbs & Chemicals Associated with Tinnitus" from the Center for Hearing Loss Help website.

Sound therapy — via CDs, sound generators that look like hearing aids, even an air conditioner or white noise machine — is often one of the more effective treatments. "We perceive sound in relative terms," explains Seidman. "If you're in a noisy room, tinnitus bothers you less than when you're trying to fall asleep at night. These devices work the same way. Your ear becomes so habituated to the other sounds that you don't notice the tinnitus." William Shatner, whose tinnitus may have been triggered by a special effects explosion on the Star Trek episode "Arena," has said that habituation therapy is the only treatment that worked for him. (Leonard Nimoy also reportedly began to suffer from tinnitus after that explosion, though his condition was not as severe as Shatner's.)

Sleeplessness, anxiety and frustration can make tinnitus unbearable. "If you're convinced that tinnitus will ruin your life, it will," says Seidman. Counseling-based approaches such as cognitive behavior therapy, biofeedback, mindfulness-based therapy — coupled with sound therapy — can be effective.

By amplifying background sound, hearing aids make tinnitus less noticeable. They also lessen the stress of trying so hard to hear over the ringing. To find a hearing specialist experienced in treating tinnitus, check the American Tinnitus Association (ATA), the American Academy of Audiology or the Hearing Loss Association of America.

"Anything that improves health improves tinnitus," Seidman says. Aim for a Mediterranean diet, high in fish, green vegetables, olive oil, nuts, seeds and fruits, and low in red meat, processed foods, saturated and trans fats, salt and simple sugars. Sometimes specific foods — red wine, cheese, chocolate, caffeine — can set off the incessant ringing in the ears. But a recent   2014 study in the American Journal of Medicine, found that women between the ages of 20 and 50 who drink three or four cups of coffee a day have a lower risk of developing tinnitus. What about dietary supplements? The ATA notes that magnesium, zinc or B vitamins may bring relief, but most experts say more studies need to be done to test their effectiveness.

This story was updated March 24, 2017, by Cathie Gandel, a freelance writer specializing in health and hearing.