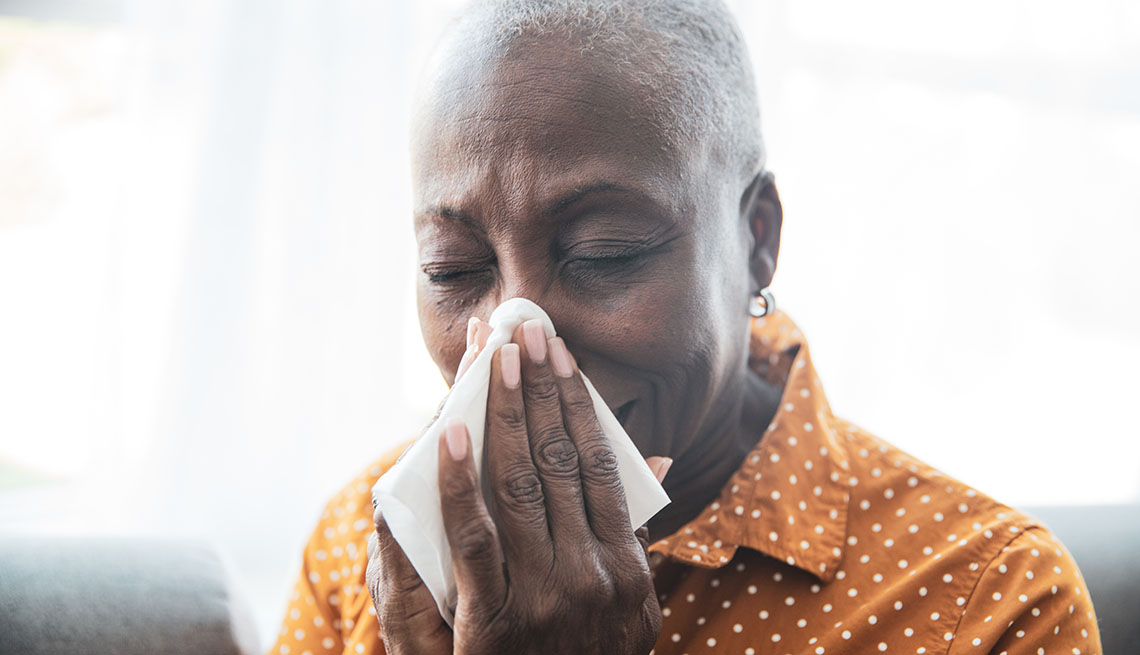 Pollen counts are rising and so are allergy symptoms.

But before you reach for an over-the-counter product to ease the sneezing, itching and runny nose, know this: Some allergy medications are more effective than others — and some can be downright dangerous for older adults.

“Medications that were fine for you to take when you were younger can be more problematic as you age,” explains Joshua Niznik, an assistant professor of medicine at the University of North Carolina School of Medicine and Eshelman School of Pharmacy in Chapel Hill, North Carolina. “More of these medications pass through the blood-brain barrier and it’s harder for you to eliminate them from your body as you get older. As a result, you’re more prone to side effects.”

Here’s how to handle your hay fever without unwanted side effects.

Diphenhydramine (Benadryl). The antihistamine diphenhydramine commonly causes sleepiness, but it can also usher in a slew of other symptoms in older adults, like anxiety, confusion, blurred vision, constipation and difficulty urinating.

“All of these together raise the risk of falls, which is already a concern for older adults,” Niznik says. In 2019, falls sent roughly 3 million adults 65 and older to emergency rooms and caused more than 34,000 deaths, according to the Centers for Disease Control and Prevention (CDC).

Diphenhydramine is also part of a class of medications known as anticholinergics, which have been linked to dementia, according to a 2019 study published in JAMA Internal Medicine. Researchers found that longer-term use of anticholinergics — which block acetylcholine, a chemical messenger in the brain involved in learning and memory — was associated with roughly a 50 percent greater risk for dementia in adults.

It’s important to know that diphenhydramine is found in a number of combination medications that relieve allergy and cold-like symptoms (Sudafed PE Sinus Congestion Day + Night and Theraflu Nighttime Severe Cold & Cough, for example), so be sure to read the label carefully when shopping for relief.

Decongestants. Stuffy nose? Beware of decongestants, including phenylephrine or pseudoephedrine, which are often found in products such as Sudafed. This is especially true if you have high blood pressure or cardiovascular disease.

“Any decongestant will raise blood pressure, possibly causing an increase in heart arrhythmias,” says Kevin McGrath, M.D., an allergist in Wethersfield, Connecticut, and a spokesperson for the American College of Allergy, Asthma ﻿& Immunology. People with glaucoma or hyperthyroidism should also avoid decongestants, according to the Mayo Clinic.

Taken too late in the day, decongestants can make it difficult to fall asleep. They can also lead to nervousness and a jittery or shaky feeling, McGrath says.

While usually found in cold medicines, phenylephrine and pseudoephedrine are in some allergy products, as well. “In general, avoid anything that has a D in its name, like Zyrtec-D, since it has a decongestant added,” Niznik says. Allegra-D and Claritin-D are two other examples of allergy medicines that contain both a decongestant and an antihistamine.

Decongestant nasal sprays such as Afrin don’t carry the same risks as their pill counterparts, but you do need to limit their use since they can cause rebound congestion, or constant stuffiness, if used too often.

What to take instead

Nasal steroid sprays. These are actually the first line of treatment for people with seasonal allergies, and studies show they can be even more effective than oral antihistamines. Three that McGrath recommends are Nasacort AQ﻿﻿ ﻿a﻿n﻿d Rhinocort Aqua (both require a prescription), and Flonase Sensimist, an over-the-counter product.

Certain over-the-counter oral antihistamines. If a nasal steroid spray isn’t enough, you can pair it with an over-the-counter antihistamine.  McGrath’s first choice for older adults is Allegra 180 mg. “It’s nonsedating as it does not cross the blood-brain barrier, so it doesn't cause any drowsiness,” he explains. If you don’t have that on hand, he suggests Xyzal, which he says is less sedating than other brands.

Allergy immunotherapy. These are regular injections over a period of time — generally around three to five years — to stop or reduce allergy attacks. Each allergy shot contains a minuscule amount of what you’re allergic to, to stimulate your immune system.

Over time, your doctor increases the dose of allergens in each shot to help get your body used to the allergens so that your symptoms diminish. While it’s normally thought of as a treatment for kids, it can be extremely effective in older adults, too. In fact, a 2016 study published in the Annals of Allergy, Asthma ﻿& Immunology found that immunotherapy reduced symptoms by 55 percent in adults ages 65 to 75 after three years of therapy and decreased the amount of medication patients needed to take by almost two-thirds.

Nondrug treatments. McGrath also recommends nondrug treatments such as a nasal saline rinse or neti pot to help to flush allergens and irritants from your nose. (Use them before you spritz a nasal steroid spray to get the best effect.) If you use a neti pot, just remember to use distilled water, not tap water (unless you boil it first), to avoid risk of a dangerous parasitic infection that can spread up into the nose and possibly the brain.

Remember, too, that lifestyle steps can help. Keep windows closed during high pollen periods and instead run the air conditioner in your home or car. If you spend time outside, remove your clothes when you come in and shower to rinse pollen from your skin and hair.

McGrath also recommends air purifiers with HEPA filters for areas where you spend a lot of time, like your bedroom or living room. These seem like small steps, but they may keep your symptoms at bay enough that you can avoid medication.

Drugs that can trigger asthma and allergy-like symptoms

Unfortunately, certain medications you may take to control other conditions, such as high blood pressure, can make asthma symptoms worse or trigger allergy-like symptoms in some people. These include:

Beta blockers. Drugs such as labetalol or propranolol are often used to treat high blood pressure, heart disease﻿ and migraine. But they can also provoke asthma symptoms in people who have the condition. Your doctor may have to try several different beta blockers to find one that doesn’t worsen your symptoms.

ACE inhibitors. Drugs like lisinopril and enalapril, which are used for high blood pressure or heart disease, can cause a cough — including wheezing — in about 10 percent of patients, studies show. This usually resolves once you stop the medication, McGrath says. If you notice this symptom, talk to your doctor. You may be able to switch to a different class of medication.

NSAIDs. Over-the-counter pain relievers such as ibuprofen and naproxen can trigger symptoms in some people with asthma. Talk to your doctor if you are concerned; acetaminophen may be a better option.

7 Ways to Treat Your Allergies as Pollen Counts Rise

Is It a Sinus Infection?

It’s Allergy Season! Are You Prepared?