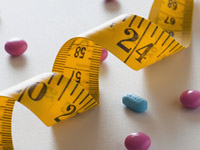 A prescription drug or over-the-counter medicine could be making you fat.

They also can make you fat, says George Blackburn, M.D., associate professor of surgery and nutrition at Harvard Medical School, and director of the Center for the Study of Nutrition Medicine at the Beth Israel Deaconess Medical Center in Boston.

Doctors stress that you should never stop taking a drug because you suspect it's making you gain weight. "Don't just stop," says Lillian F. Lien, M.D., medical director of the Duke Inpatient Diabetes Management program. "That's the most dangerous thing to do."

But do watch the scale. If you see a weight gain of "five pounds or more, circle back to the care provider and nip this in the bud," says Blackburn.

Doctors and obesity researchers say weight gain is associated with a few categories or families of drugs, not necessarily some specific brands. And not everyone who takes these medicines puts on pounds. Happily, those who do usually have an alternative medication they can try.

According to Blackburn, the types of drugs associated with weight gain for some patients include:

Next: Which blood pressure drugs aren't linked to weight gain? >>

There's no way to know in advance whether someone will gain weight on a certain drug, or whether a slightly different compound will have a different effect on the waistline — or rather on the brain and appetite centers that contribute to that waistline. In fact, a drug that makes one person pile on pounds could suppress the appetite in another patient.

A drug that makes one person pile on pounds could suppress the appetite in another patient.

While taking antidepressants known as SSRIs, for example, which include drugs such as Prozac and Zoloft, some people gain weight, some lose it and others see no change, says Lawrence J. Cheskin, M.D., director of the Johns Hopkins Weight Management Center and an associate professor at the Johns Hopkins Bloomberg School of Public Health.

Diabetes drugs also can make people gain, which Duke diabetes expert Lien notes is ironic because obesity is associated with diabetes in the first place.

Of course, a drug may not be the only reason for weight gain. The stress and pain of being ill can make people eat more and exercise less. Cheskin says it's important to look at the whole picture — diet, drugs, exercise, lifestyle.

If you gain five pounds, that added weight may or may not be related to the medicine you're taking, Cheskin says.

None of this means that patients can't or shouldn't take drugs in these categories. But it does mean they need to discuss weight issues with their physicians, and educate themselves, too, about side effects, says Harvard's Blackburn. That's particularly important for people who are already overweight, or who have had ups and downs with their weight in the past.

Usually, the physician will be able to find another drug that works without adding pounds. For instance, Lien says metformin (also known as Glucophage) is often preferred for diabetics and it doesn't carry the same risk of added weight as insulin and several other diabetes drugs.

Blackburn says men and women with depression may want to try Wellbutrin, Zyban or Serzone, which aren't associated with weight gain.

A patient getting plump on a beta-blocker might do better with an ACE inhibitor.

Next: If you can't switch drugs, you can still lessen weight gain. >>

Occasionally, because of other drug interactions, health conditions such as liver or kidney problems, allergies, or very complex medical conditions — after an organ transplant, for example — there is no substitute drug that will work for a specific patient. But those cases are rare and even then doctors can sometimes find solutions or at least improvements.

Cheskin says, for example, physicians can change the doses or even the time of day to reduce the risk of weight gain. Another strategy is to combine the drugs — keep the patient on an essential drug but use a little less of that and a little more of another medicine — for an individualized drug cocktail that deals with the underlying disease or condition without the weight issue.

Lien says patients known to be at risk of weight gain, or those who start to put on the pounds as soon as they take a drug, also can be helped with a supervised diet and exercise program.

Doctors say patients should talk to them about drugs and weight, and not just assume that the physician is aware of every potential side effect of every medicine. If weight gain is a concern, ask the doctor to check your medicine.

Joanne Kenen is a Washington writer who covers health and health policy issues.