En español | A new study challenges the traditional method of prescribing blood pressure medication — to start with one drug and add others if the first isn't enough — and some experts are calling for a change in guidelines that could help doctors with the delicate and often frustrating dilemma of getting blood pressure meds right. 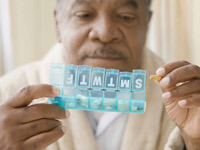 People with high blood pressure who start treatment on two medications see a substantially greater improvement — without paying the price in added side effects — than those who begin with a single drug, according to the results of the study published Jan. 12 in The Lancet, a British medical journal.

The study's authors, from the University of Cambridge, the British Hypertension Society, the University of Glasgow and the drugmaker Novartis, conclude that, rather than starting with one medication, initial treatment with a two-drug combination "can be recommended" for patients with a systolic blood pressure of at least 150.

Current U.S. guidelines, published in 2003, call for two drugs right off the bat only in treating especially high blood pressure (systolic above 160), but this study strengthens a previous recommendation by the American Society of Hypertension that starting with two medications might help people with less severe elevations in blood pressure (systolic readings between 140 and 160).

In the British study, 318 patients started on aliskiren (Tekturna) alone, 316 took amlodipine (Norvasc) alone and 620 began treatment with both drugs. After 16 weeks, patients on the combination therapy had their blood pressure drop 6.5 points more than those taking a single drug. Between weeks 16 and 24, when all patients in the study took both drugs, those who'd started on one medication nearly caught up with those taking a drug combination from the beginning, but their average blood-pressure reduction still lagged.

George Bakris, M.D., a hypertension specialist at the University of Chicago who helped develop both the U.S. professional guidelines for treating hypertension and the more recent American Society of Hypertension (ASH) statement on the subject, endorsed wider use of initial combination therapy in an editorial accompanying the Lancet study. In order to get their blood pressure to an acceptable level, he says, the great majority of people with high blood pressure will need two drugs that work in complementary ways. Traditionally, doctors have started many patients on one drug, then may have slowly increased the dose or added second and even third drugs over a period of months.

But leaving blood pressure uncontrolled in the initial phases of treatment can leave patients vulnerable to strokes and heart attacks, says Bakris. And in the new trial, starting on combination therapy produced no more untoward effects — such as swelling in the legs — than introducing medicines sequentially. "If combination therapy gets you to your blood pressure goal faster, safely, then why not do it?" he says.

Physicians have been reluctant to adopt combination therapy for hypertension, partly, says Bakris, because of a lack of training in the area. Indeed, according to William Cushman, M.D., a leading hypertension researcher at the University of Tennessee College of Medicine in Memphis who also worked on the hypertension guidelines panel, a key reason to push for early attainment of blood pressure goals is the reality of "clinical inertia."

Blood pressure medications can be notoriously tricky to get right, and, over many months and repeated physician visits, "either the doctor or the patient bails out," says Cushman, and optimal blood pressure control is never achieved.

Although the study looked at two specific drugs, Bakris says the research speaks to the value of "combination therapy in general" rather than to the superiority of particular drugs. In fact, the ASH statement lists as "preferred" four combinations of established drug classes. Insurers often prefer these combinations, many of which are available as generics, including some single-pill combinations.