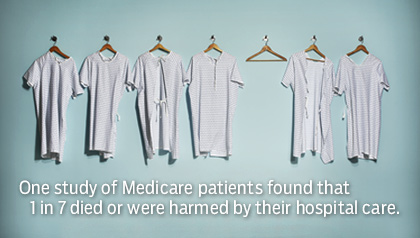 En español | American hospitals are capable of great medical feats, but they also are plagued by daily errors that cost lives. No one knows that better than Ilene Corina. In the 1990s, she saw a medical team rescue her fragile premature newborn, but she also endured the death of another son — a healthy 3-year-old — when, she says, doctors failed to attend to complications from a routine tonsillectomy.

When a family member dies because of a hospital's mistake, "what do we care about the excellence in the system?" says Corina, 51, of Long Island, N.Y., founder and president of a patient safety advocacy group. "We have to voice our anger about the problems we see in the health care system."

Corina had already joined the patient safety movement when, in 1999, the Institute of Medicine's now-famous report, To Err Is Human, burst into public consciousness with its startling announcement: Each year as many as 100,000 Americans die in hospitals from preventable medical mistakes.

Today, more than a decade into the fight against medical errors, there's little reason to believe the risks have declined substantially for the 37 million people hospitalized each year. In fact, recent studies suggest a problem that's bigger and more complex than many had imagined. A report released in January on Medicare patients found that hospital staff did not report a whopping 86 percent of harms done to patients. If most errors that harm patients aren't even reported, they can never be tracked or corrected, the Health and Human Services Department report pointed out.

This latest study built on an earlier HHS study of Medicare patients that found one in seven suffered serious or long-term injuries, or died, as a result of hospital care. Researchers said about 44 percent of the problems were preventable.

In another key study published last spring in the journal Health Affairs, researchers examined patient charts at three of America's leading hospitals and found that an astounding one in three admissions included some type of harm to the patient. 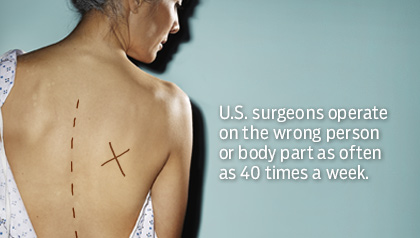 Mistakes run the gamut. The surgeon nicks a healthy blood vessel; a nurse mistakenly administers a toxic dose of medicine; the staff fails to adequately disinfect a room, and a patient contracts a dangerous "superbug."

The number of patients who die each year from preventable hospital errors is equal to four full jumbo jets crashing each week. If airline tragedies of that magnitude were occurring with such frequency, no one would tolerate the loss.

"At its deepest level, what we're now having trouble with is the enormous complexity of medicine," says Atul Gawande, a surgeon, Harvard associate professor and author who promotes the use of medical checklists to save lives. "We now have 13,600 diagnoses, 6,000 drugs, 4,000 medical and surgical procedures," he says. And yet "we have not paid attention to the nuts and bolts of what's required to manage complexity." Experts like Gawande say one reason medical errors continue at such high rates is that hospitals have only recently begun to copy aviation's decades-long effort to create safety procedures that take into account human fallibility — often using only simple checklists.

There has been some progress, to be sure. Around the country, safety innovators have introduced promising ways to minimize slipups — from using checklists to reporting hospital infection rates on state websites. Last spring the Obama administration announced it would spend $1 billion to fund safety measures by hospitals, with the ambitious goal of reducing preventable patient injuries by 40 percent by the end of next year.

Still, the question of how close hospitals can ever come to being error-free is controversial. It seems fair to expect them to reduce the number of times — as many as 40 per week — that U.S. surgeons operate on the wrong person or body part. But what about other procedures?

Patient safety advocates have been able to raise the bar on hospitals in some key areas, showing that they can prevent harm to even the most vulnerable patients. A case in point: bloodstream infections that result from inserting a tube into a large vein near the heart to deliver medication. For years, these infections, which resulted in some 30,000 deaths annually, were viewed as largely unavoidable. 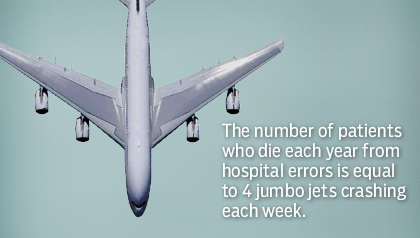 Advocates agree that patients can minimize their risks by keeping a close eye on their care. Hospitals are busy places with lots of moving parts. "You cannot assume that people in the hospital have a really clear idea of who you are or why you're there," says Jean Rexford, director of the Connecticut Center for Patient Safety.

Here are some tips on how to protect yourself:

But then, in a program launched in 2004, more than 100 Michigan intensive care units managed to reduce these infections by two-thirds — and save some 1,500 lives in just 18 months — using a short checklist of practices for handling the catheters, and a culture change aimed at getting all staff on board. Hospitals around the country then took up the challenge, and the results were impressive.

The trouble is, there are plenty of other problems that may not be susceptible to an approach that tests a simple process that can then be used nationwide. A recent program looking at lapses that could lead to surgery on the wrong section of the patient found that errors can creep in just about anywhere, from scheduling to the marking of the surgical site. A couple of hospitals, for example, were using pens whose ink washed off during surgical prep, making the marks useless. Flaws in this process vary from one hospital or surgery center to another, says Mark Chassin, M.D., president of the Joint Commission, the major accrediting organization for hospitals.

Other, apparently straightforward problems — like health care workers not washing their hands — have proved surprisingly stubborn. Only about half of hospital workers follow hand-washing guidelines, despite excellent staff training and ubiquitous hand sanitizer dispensers at many hospitals, says Robert Wachter, M.D., a patient safety expert at the University of California, San Francisco. He points out an airline pilot would be disciplined or fired for ignoring safety rules. But while penalizing careless individuals remains controversial — and largely untried — in health care, activists have made hospitals more accountable.

There are hundreds of ways to measure safety performance, from death rates after heart surgery to whether doctors gave the right antibiotic. What to report has been a major debate. Infection rates, initially resisted by hospitals, are now generally regarded as some of the most reliable data available to the public, since in most cases reports are made through a standard system developed by the U.S. Centers for Disease Control and Prevention.

Money may be another motivator for hospitals. In 2008 Medicare took the small step of restricting payments to hospitals for extra costs associated with 10 hospital-acquired conditions. This year it will begin giving extra money to hospitals that score the highest on a set of standards linked to better results for patients. 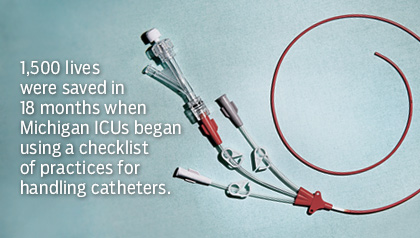 Naturally, many patients want to compare the safety records of their local hospitals before checking in. But that's still tough to do. "There are no existing data that can allow you to be confident you've picked the safest, highest-quality place to get care," says Chassin, who helped prepare the seminal To Err Is Human report. "One reason is that safety and quality varies even within health systems. Just because they're great in one area doesn't mean that they're great in another."

Katharine Greider is a freelance writer in New York who reports on health and science.