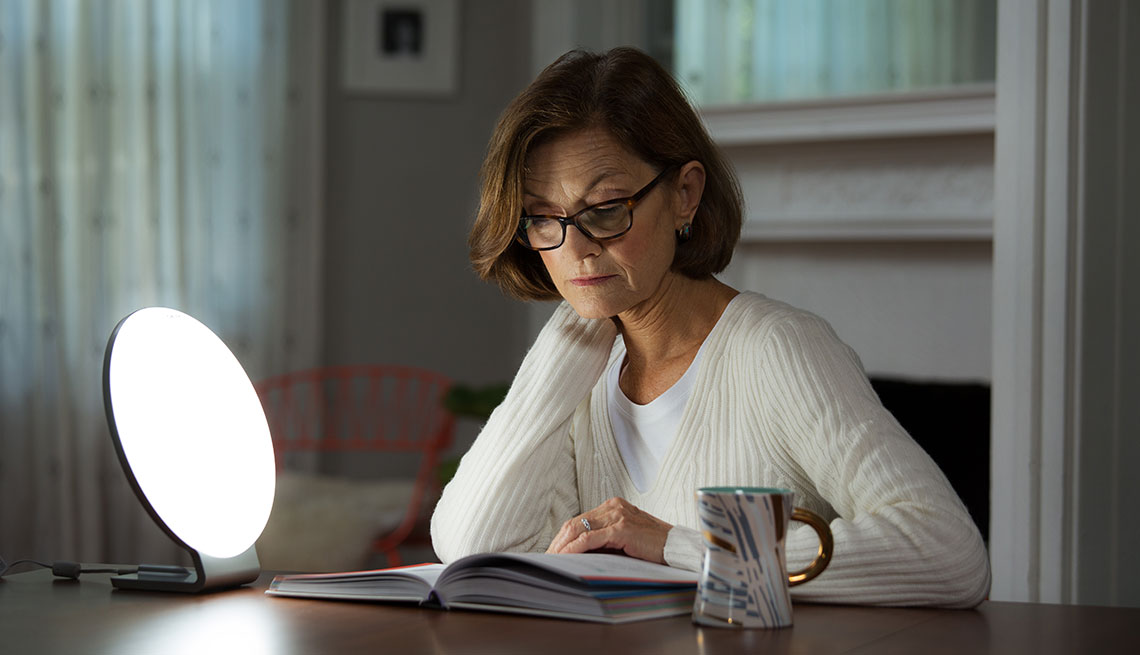 People can use a specially designed light to treat seasonal affective disorder and other ailments.

For an increasing number of health conditions, the right medicine might simply be a dose of bright light. Here’s a sampling of the promising and often surprising research underway.

Light therapy is most associated with seasonal affective disorder (SAD) — a form of depression that hits some people during darker winter days — but what’s exciting is the growing number of studies pointing toward this therapy’s effectiveness in treating nonseasonal depression.

In a 2015 study at the University of British Columbia in Vancouver, subjects with depression were given Prozac, a placebo, light therapy, or Prozac and light therapy for eight weeks. The people who used light therapy or Prozac improved more than the placebo group, but those who combined light therapy with Prozac saw the most improvement.

As with SAD treatments, the light works by stimulating the retina, says Norman E. Rosenthal, clinical professor of psychiatry at Georgetown University Medical School in Washington, D.C. The retina signals the brain’s hypothalamus, “which then funnels the info in many directions, one of which is involved in boosting serotonin.”

To treat SAD, people use a specially designed light — a good one costs around $150 — of at least 10,000 lux (the equivalent of being outside on a clear spring day). It’s placed about two feet from the face, usually for 10 to 30 minutes in the morning. Experts advise people with nonseasonal depression to consult their doctor before trying self-treatment with a SAD light, which can exacerbate some eye conditions.

In a small clinical trial, researchers applied LED lights to Alzheimer’s patients with two devices — one worn like a headset and another that clips to the nose — for 20 to 25 minutes twice a week. Over 12 weeks the subjects reported a dramatic improvement in their cognitive abilities, says one of the study’s coauthors, Michael Hamblin, principal investigator at the Wellman Center for Photomedicine at Massachusetts General Hospital in Boston. “Then they removed the device, and they all got worse,” Hamblin says. “But when they were given their own device to use at home, they all improved for a second time.”

The treatment seems to work because a small amount of the light is able to reach the brain, which is extremely sensitive to light. Scientists say the light stimulates new cell growth and connections between neurons. Known as photobiomodulation, this approach is still in its early testing stages, though more patients are now receiving the same therapy used in Hamblin’s study — a $499 product called VieLight. Scientists are also excited for its potential to treat Parkinson’s disease, traumatic brain injury and more ailments.

The idea of dawn simulation has been around for a while, but it has just now become a mainstream way to improve sleep patterns. The simulators are specially designed bedside LED lights, costing $20 and up, that turn on 20 or 30 minutes before you wake up and slowly grow brighter before the alarm sounds. (Some can add soothing sounds such as gentle rainfall.) They are recommended for people with sleep issues, to help reestablish healthy sleep cycles. Users often say they feel more energy upon waking.

Photodynamic therapy (PDT) is the combination of light with special drugs called photosensitizing agents. This effective treatment often eliminates the need for surgery. The agent is applied to the cancerous region, or to a sun-damaged area that is precancerous, on the skin or through a vein. Once the cells absorb the agent, light is applied, causing the drug to react with oxygen. This forms a chemical that kills the cells. “It will kill anything,” Hamblin says. “It’s like the strongest beam of X-rays that you can imagine.”

Because it finds cells that are rapidly dividing, PDT may catch cancer that surgery doesn’t, says Jami Lyn Miller, a dermatologist at Vanderbilt Health in Nashville, Tenn. PDT is used to treat certain infections, too.