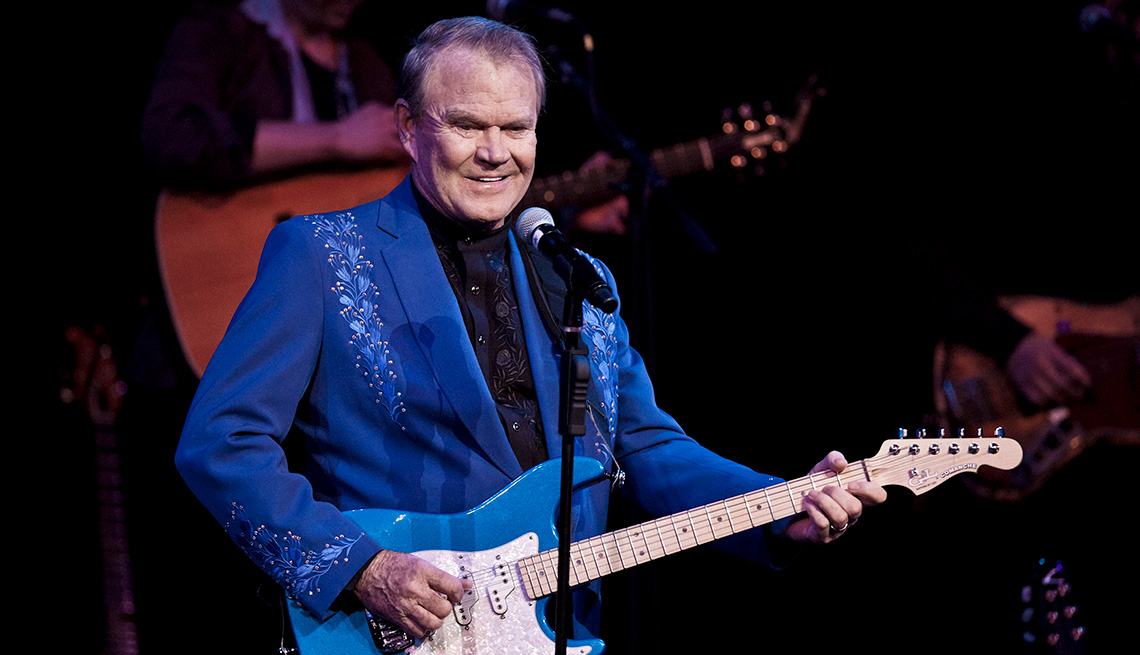 Glen Campbell performing in 2012 as part of his "Goodbye Tour."
Chad Batka/The New York Times/Redux
By:

As fellow musicians, actors and even former presidents reacted to the news of Glen Campbell’s death Tuesday, appreciation poured in for the gentlemanly, apple-cheeked singer and guitar picker, a session musician-turned-recording and film star whose ability to fuse genres helped give a later generation of performers a wider audience.

But Campbell’s final contribution — openly sharing his experience with a disease that affects 5.5 million Americans — spoke more to the strength of his character than it did to his wide-ranging musical talent.

Officially diagnosed with Alzheimer’s in 2011, Campbell swiftly set off on a goodbye tour, with a five-week adieu turning into a 15-city marathon. Ronald Petersen, a neurologist who treated Campbell at the Mayo Clinic, says that as bold as it was of Campbell to go public with his diagnosis at the time (something that very few celebrities choose to do), it was “additionally courageous, and important, of him to allow a film crew to document what’s happening to him on the road as the disease progresses.” The resulting documentary, Glen Campbell: I’ll Be Me, was released in 2014.

While the disease was “pretty well established” by the time Campbell was treating crowds to renditions of Rhinestone Cowboy or Southern Nights, he showed fans and the public alike “that people with this kind of impairment can still have quality of life, and that they can do the things they enjoy … with the appropriate supports,” says Petersen. The film also showed the very forgiving response of fans when Campbell, then struggling with tasks as simple as finding a hotel room bathroom, tripped up on lyrics or, say, made a nonsensical statement from the stage.

“They were endeared to him and cared so much,” Petersen says. “They weren’t judging him, or anything of the sort.” While some of that had to do with the fans’ love of Campbell — a nice guy even to the bitter end of his  treatment,  notes Petersen — the response isn’t that unlike what many patients encounter when they let others in on their disease, he says.

“What people have to overcome is this feeling they will be scorned or stigmatized, when in fact [disclosing their condition] often leads to a lot of outpouring of affection and support.”

Of course, much of Campbell’s ability to inspire others late in his life had to do with the support of his family. Three of his children backed him up, literally, on the tour and also play on his final album, Adios, released in June. His wife, Kim, stayed by his side at every stage of the disease, visiting him daily when he moved to a continuing care facility in Nashville in 2014, where he died on Tuesday. (The family also lobbied Capitol Hill for research funds for the disease in 2012 and 2013.) Sharing her own “trials and tribulations” of caregiving may also “help other caregivers feel not so alone in this, as they recognize the same kind of struggles and experiences that Glen and Kim had,” says Petersen, who reports that the family has been receiving “enormous amounts of support” at this sad time from those who knew and loved Campbell.