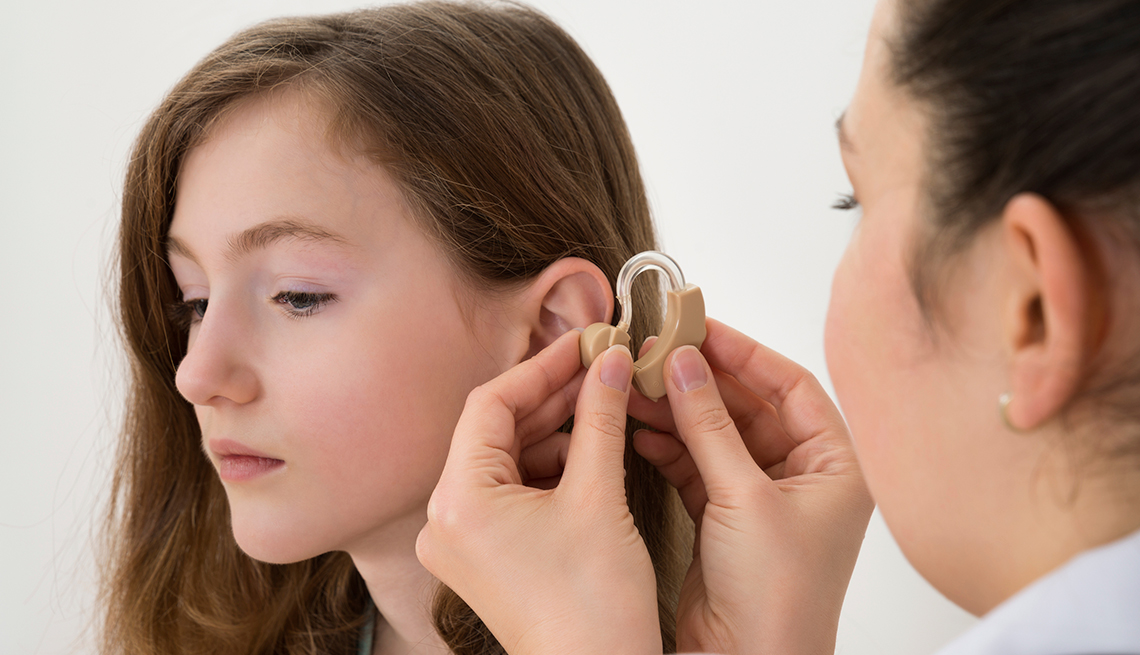 Exposure to loud music and other situations may cause early hearing loss in teens.

If your teenage kids or grandkids listen to loud music — and what teen doesn't? — talk to them now about hearing loss. New research by Brazilian and Canadian researchers shows that risky listening habits can cause persistent tinnitus, that ringing in the ears that just won't go away, in nearly 30 percent of teens.

"That's a very high percentage," said study coauthor Larry Roberts, a neuroscientist who specializes in hearing at McMaster University in Hamilton, Ontario. "In most cases, the level of disturbance was pretty moderate, but some teens said they had difficulty sleeping and concentrating."

In what Roberts calls a first of its kind study, 170 kids between the ages of 11 and 17 underwent thorough hearing tests in São Paulo, Brazil. They also answered questions about risky listening habits — such as continuous use of ear buds and exposure to noisy environments — and past experiences with temporary ringing in the ears common after loud events like rock concerts. Over half reported experiencing tinnitus.

"This level of prevalence is alarming," said lead researcher Tanit Ganz Sanchez, M.D. "If this teen generation continue to expose themselves to very high noise levels, they'll probably suffer from hearing loss by the time they're 30 or 40,"

Sanchez, of the University of São Paulo School of Medicine, also found that the youngsters with tinnitus were more sensitive to loud sounds, by about 11 decibels.

"That's a lot, and it's an important measurement," Roberts says.

Tinnitus potentially indicates irreparable damage to the auditory fibers that transmit sound from the ears to receptors in the brain. These fibers naturally die off as we age, eventually leading to hearing loss, but, says Roberts, "When you damage these fibers, you increase the rate of age-related hearing loss."

Tinnitus expert Richard Tyler agrees and is blunt about the risk that teens face down the road.

"As a grandparent, you may have needed a hearing aid at 65. You can tell your grandkids, if they listen to loud music, they may need hearing aids at age 45," says Tyler, a professor of otolaryngology and of communication sciences and disorders at the University of Iowa.

Sounds grim, right? Fortunately, you can take steps to protect your teen's hearing.

Talk to your teen. Emphasize the importance of ear protection and the dangers posed by loud sounds. "You might think they don't listen, but chances are, they hear you loud and clear," says Roberts. His 19-year-old grandson expressed concern about noise at work and received a transfer. "I never thought he was paying any attention, but my message got through to him."

Advocate for hearing. "Tell them that hearing is really important," Tyler says. "It enables us to communicate with each other, to listen to and enjoy music, to nurture relationships and enjoy life." Let them know that protecting their ears will preserve these functions.

Invest in ear protection. Earplugs are important tools for preserving hearing. "I always carry earplugs in my pocket," Tyler says. Your teen should, too, just in case he or she winds up somewhere overly noisy. And if they balk? Point to the musicians they find so cool. "If your kids look at the band that's playing, they're going to see that they all wear earplugs," Roberts says. "That's a comment that can have an impact on a teenager."

Make an escape plan. Discuss with your teen what to do when at a loud party or concert. If they have earplugs, great. Otherwise, Roberts and Tyler recommend, suggest that they take frequent breaks from the noise by finding a quieter space with their friends.

Educate them about limits. How do you know it's too loud, whether at a concert or listening to earbuds? "If you cannot hear someone speaking to you , it's time to leave or turn down the volume," Roberts says.

Issue a warning. After a night of loud music, your teen's ears may ring for a day or two. Be forthright about future risks, says Tyler: "It's a warning sign now, but if you continue doing this, it may never go away. Would you like to live with this forever?"

Matt McMillen is a freelance writer.

More On Health and Hearing Loss