En español | If you had seen Lisa Kulik and her husband strolling the grounds of the University of Southern California's Eye Institute last summer, you would have thought nothing of it. But for Kulik, that simple walk around the campus was "a miracle." Blind for more than two decades from an inherited eye disease called retinitis pigmentosa, Kulik was seeing again — clearly enough to make out the sidewalk and the grassy edge — thanks to a sophisticated microchip implanted in one of her eyes.

The device, called the Argus II, is just one of a growing number of bold new approaches to treating blindness, offering hope to the millions of mostly older Americans in danger of losing their sight from macular degeneration, glaucoma, diabetic retinopathy and other eye diseases. In fact, progress in ophthalmology is so rapid that some researchers have already begun to envision an end to many forms of vision loss. "We still have a lot to learn," admits Stephen Rose, chief research officer for the Foundation Fighting Blindness. "But it's not a question of if we'll end blindness. It's really just a question of when." 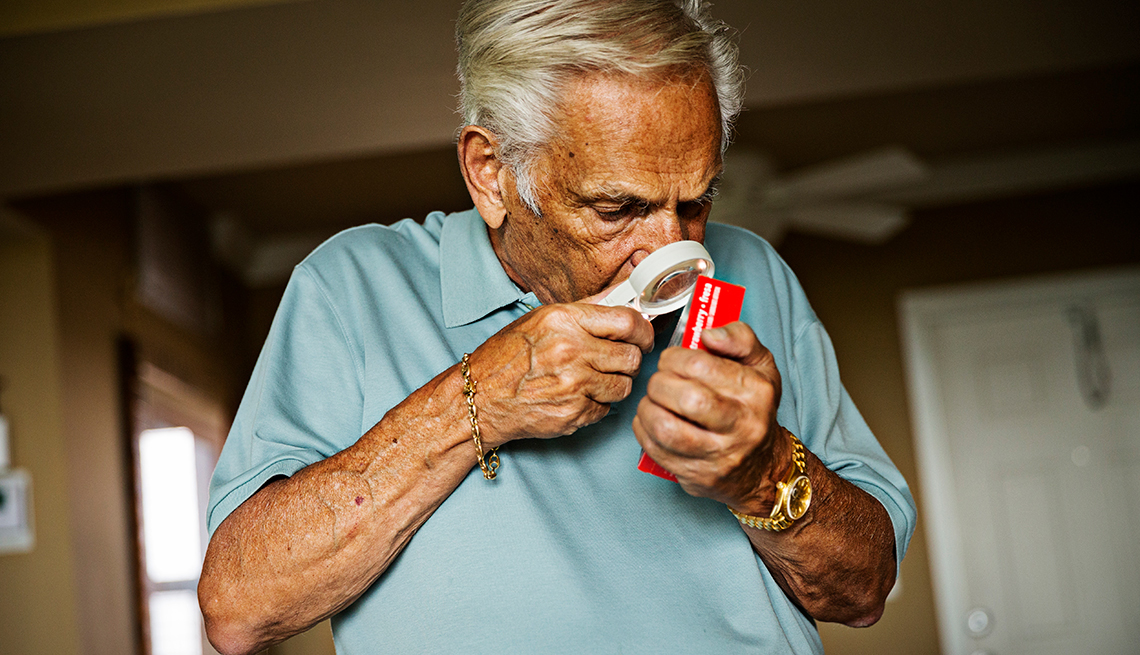 Joe Vellone, 76, received a telescope implant to improve his vision.

For years, Joe Vellone, 76, watched his sight gradually deteriorate from age-related macular degeneration (AMD), a condition in which the light-sensitive cells of the macula — the central part of the retina — are destroyed. "My vision was so bad I'd walk right by people I know because I didn't see them. I couldn't read at all," says Vellone, who lives in Somers, N.Y., with his wife.

Last year surgeons inserted a telescope implant manufactured by VisionCare into one of his eyes. Like a stargazing telescope, the tiny device magnifies a small area and projects the image across the whole retina, allowing healthy cells to make it out. "It changed my life," says Vellone. "I'm reading again. I'm able to see football games on TV. Last summer I was able to see well enough to plant a garden again — eggplants, tomatoes, peppers."

The VisionCare telescope implant recently won FDA approval for patients 65 and older with end-stage AMD. The telescope is implanted only in one eye, so that the other eye continues to have full peripheral vision. The implant cannot be placed in an eye that has had cataract surgery. And because some people have trouble adjusting to the different images each eye receives, ophthalmologists run prospective candidates through a series of tests to determine if they're a good fit. "Fortunately, the brain is usually able to adjust to the two different images," explains ophthalmologist David Boyer, who directs the Retina-Vitreous Associates Medical Group in Southern California. "For many patients, we see significant improvements." 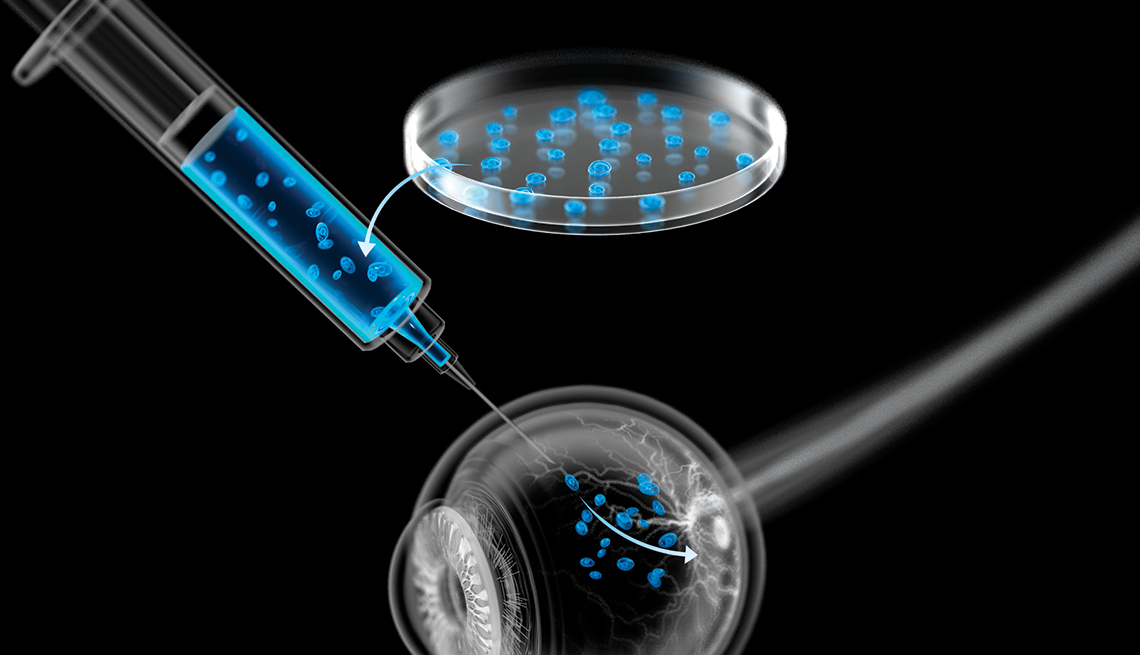 Wet macular degeneration occurs when abnormal blood vessels grow under the retina, often leaking fluid or blood into the macula and damaging central vision. Although far less common than the dry form, in which deposits destroy the macula, wet AMD is much more destructive, leading to more rapid and profound vision loss. Fortunately, a new class of drugs called anti-VEGF agents, now widely available, can halt and sometimes even reverse the damage. Injected into the eye, the medications block VEGF proteins, which normally help blood vessels form. "Before anti-VEGF agents, we had nothing to stop wet macular degeneration," says Jeffrey Heier, M.D., chair of research and therapeutics for the American Society of Retina Specialists and director of the Vitreoretinal Service at Ophthalmic Consultants of Boston. "Now, in a majority of patients, we can stabilize vision and, in some patients, even restore some vision."

The shots have one big drawback: They have to be administered as often as monthly. To eliminate repeated injections, researchers are developing innovative ways to deliver medication to the eye. One approach under investigation is to implant a small reservoir that steadily releases medication over time, says Heier. Another, more dramatic possibility: using gene therapy to reprogram cells in the eye to produce their own anti-VEGF agents.

The holy grail of research to treat macular degeneration, though, is finding ways to regenerate healthy cells to replace those damaged by disease. That may not be far off. In 2014, a team at the Jules Stein Eye Institute at the University of California, Los Angeles, reported early success growing retinal cells in the lab and injecting them into the eyes of patients with several different forms of AMD. The scientists began with pluripotent stem cells, which have the ability to become any cell. "Over a period of months, the cells are coaxed into becoming retinal pigment epithelial cells, which support the photoreceptor cells in the retina," explains Eddy Anglade, M.D., chief medical officer for Ocata Therapeutics, the Massachusetts-based company that is developing the procedure. Early results show significant improvements in vision in some patients, and clinical trials are under way to refine the procedure.

The "bionic eye" that restored some of Lisa Kulik's vision uses a tiny video camera mounted on glasses to transmit light signals to a microchip implanted in the eye. The microchip then relays that information to the brain, though it collects only a tiny fraction of the information a healthy eye receives. "But that's enough to help people who have been blind see large objects and make out outlines," says University of Southern California ophthalmologist and biomedical engineer Mark Humayun, who helped develop the Argus II. The device has so far been approved by the FDA for retinitis pigmentosa, an inherited disease that affects about 100,000 Americans, although it may have broader applications in the future.

Using a different tack, researchers at a California-based company called Eos Neuroscience have successfully inserted beneath the retina a gene that enables cells to capture light. The goal is to engineer healthy eye cells to take over for photoreceptor cells that have been destroyed by retinitis pigmentosa or macular degeneration. Experiments in mice have shown that the inserted gene allows blind mice to use light to guide themselves. Human trials may begin soon. 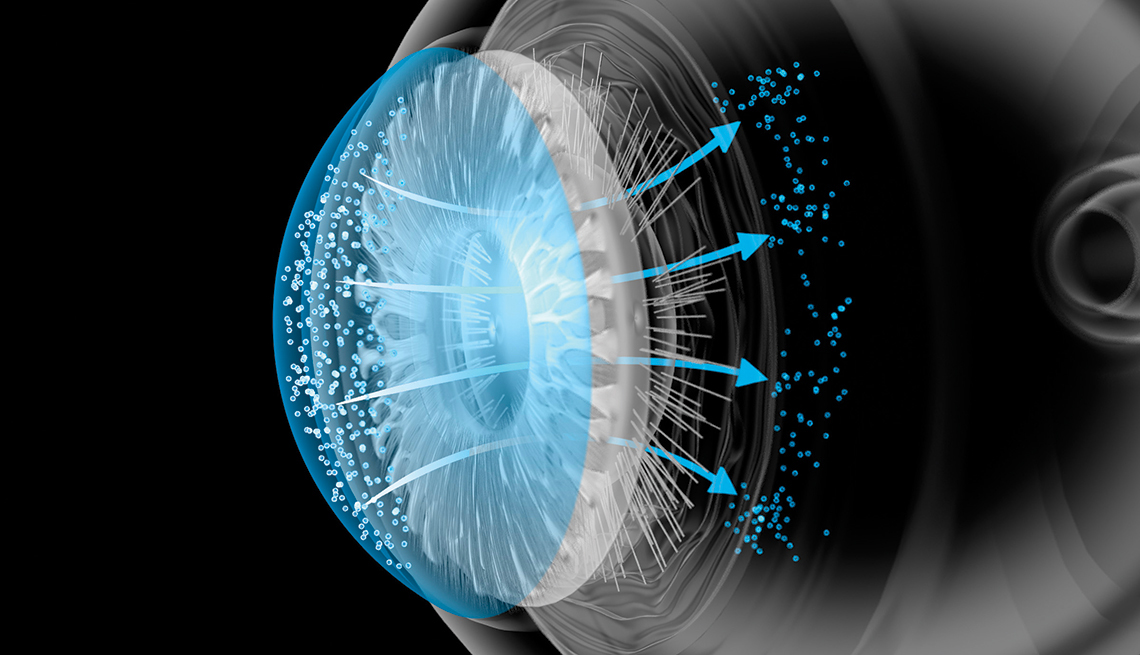 A contact lens delivering glaucoma medication is an alternative to eye drops.

For years the only treatment for glaucoma, which results from a buildup of pressure within the eye and is a leading cause of blindness among those 60-plus, was medicated eye drops. But getting people to use the drops every day for the rest of their lives has proved frustratingly difficult. Surveys show that as many as half of people with glaucoma have stopped using their eye drops after the first year. "People forget. They have trouble administering the eye drops," explains Joseph Ciolino, an ophthalmologist at Massachusetts Eye and Ear, part of Harvard Medical School. "And since the drops slow the progression of glaucoma but don't improve vision, it's hard to keep people motivated to stay on the medication."

As an alternative to drops, Ciolino and his colleague Daniel Kohane, M.D., who directs the Laboratory for Biomaterials and Drug Delivery at Boston Children's Hospital, have developed a contact lens that contains glaucoma medication sandwiched by a thin polymer film. Studies completed last year showed that the lens releases a steady and consistent dose of medication for up to a month. The drug-delivering lenses can also be laced with antibiotics or anti-inflammatory medications in order to treat infections and other eye conditions. And as an added benefit, the lenses can be designed to correct vision problems like near- or farsightedness, which would provide additional motivation for people with glaucoma to use them.

Other innovative approaches are under investigation. Researchers are developing implantable devices that can measure pressure within the eye and deliver precise doses of medication to control it when it rises too high, for example. And ongoing research with stem cells and gene therapy could provide tools to regenerate healthy optic nerve cells, undoing the damage caused by glaucoma.

Unaware of the risks

But the latest sight-saving drugs are effective only if people know that they have progressive eye diseases. Many don't. When University of Southern California ophthalmology researcher Rohit Varma, M.D., studied Hispanic residents of Los Angeles a few years ago, he found that one-quarter had type 2 diabetes and half of them had signs of eye disease — yet a majority were completely unaware of the danger. "We're making tremendous progress," says Varma, who directs the USC Eye Institute.

"The biggest hurdle we face in preventing vision loss and blindness is getting people to see an eye care provider," Varma adds. "If we could just do that, we'd go a long way toward helping people maintain healthy vision as they get older."

Peter Jaret is an award-winning health and science writer in California.