The side effects of two common breast cancer drugs make women so miserable that some end up quitting the medication early — even though they won't complain to their doctors about how bad the drugs make them feel, a new study reveals. 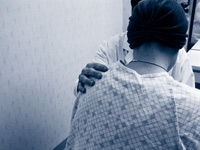 Some women abandon breast cancer treatments because the pain from these therapies is so debilitating.

Doctors consistently underestimate the side effects associated with treatment, and "patients don't want to be complainers, and don't want their doctor to discontinue treatment," according to a statement in a press release by study author Lynne Wagner, an associate professor in medical social sciences at the Northwestern University Feinberg School of Medicine. "So no one knew how bad it really was for patients."

Her research was presented earlier this month at the 34th annual San Antonio Breast Cancer Symposium.

Wagner's study is the first to actually ask the women themselves why they quit treatment early, and to examine the specific side effects the women found intolerable.

The Northwestern study surveyed nearly 700 women, average age 65, who took one of these drugs, anastrozole (brand name Arimidex) or exemestane (Aromasin). The women filled out detailed questionnaires about their symptoms before treatment and then three, six, 12 and 24 months after starting treatment.

After just three months taking the pills, a third of the women reported severe joint pain, nearly a third had hot flashes and 24 percent had decreased libido. Weight gain, fatigue and night sweats were also reported, and the percentages increased the longer the women took the medication.

As the side effects took their toll, some women began ditching the drugs. The study found that 26 percent of women quit between 25 months and fours years on the drugs, and 10 percent quit after taking the drug two years or less. In all, 36 percent ended treatment before 4.1 years.

The women at highest risk for quitting early were those who had recently undergone chemotherapy or radiation and were still recovering from their debilitating effects.

"The more miserable they were before they started, the more likely they were to quit," Wagner says.

The new study also reveals the huge gap between what doctors believed about the side effects and women's actual experiences.

Next: Discuss benefits, risks of breast cancer drugs with doctor. >>

In a previous study, doctors reported that only 5 percent of patients experienced moderate to severe symptoms as a result of taking aromatase inhibitors — a tiny fraction of what women reported in the current study.

Asked whether she thought doctors have been downplaying women's complaints, much like patient reports of "chemo brain" were initially dismissed, Wagner said in an email that the situation is more complicated.

Patients hesitate to complain, she said, because they don't want to compromise their care or "distract their doctor from treating their cancer."

Many patients also assume that if their doctors are interested in specific symptoms, they will ask; physicians, meanwhile, think that if patients are bothered by a side effect, they will mention it.

"The fear of many cancer patients — women and men — is that if they ask for a specific treatment to be stopped, their care will be compromised in some way." - Richard Frankel, Professor of Medicine

"This sets up the perfect storm for symptoms and treatment side effects not to be discussed," Wagner said.

Richard Frankel, a professor of medicine and geriatrics at Indiana University School of Medicine, isn't surprised by this lack of communication.

"We already know that, depending on the study, between 40 and 80 percent of patients given a medical recommendation — like taking a specific medicine or making certain lifestyle changes — won't follow the recommendation," says Frankel, who specializes in patient-doctor communication.

"The fear of many cancer patients — women and men — is that if they ask for a specific treatment to be stopped, their care will be compromised in some way," he says. " They worry the doctor won't pay attention to them anymore, and they're embarrassed to admit they haven't followed recommendations."

His advice: Ask lots of questions before treatment begins. "Ask about the side effects. Ask if you can talk to other patients who have taken this medication. Discuss the trade-offs between the side effects and the benefits," he says.

With cancer drugs, in particular, "there are no magic bullets, so sometimes the reduction of risk isn't worth the decrease in quality of life. But it helps if you know what to expect before you start," Frankel adds.

You may also like: Email your doctor for good health. >>

Candy Sagon writes about health for the Bulletin.