En español | Eight years after Isabelle Jackson fell and broke her hip, she retains two vivid memories of the aftermath. The first is the pain, which was excruciating. The retired schoolteacher from Hannibal, Missouri, now 91, also remembers thinking about her sister, who had fractured her hip and spent the remaining six years of her life in a wheelchair. "I was determined not to be like my sister," says Jackson, who today walks with no assistance and without a limp.

Some 300,000 Americans 65 or older fracture a hip each year. — Photo by Jose Luis Pelaez/Blend/Getty Images

Take these simple steps to reduce your risk of a broken hip.

The statistics put Jackson in a select minority: those who not only survive a hip fracture but thrive after one. Of the 300,000 Americans 65 or older who fracture a hip each year, 20 to 30 percent will die within 12 months, and "many more will experience significant functional loss," according to a 2009 study published in The Journal of the American Medical Association (JAMA).

But what makes a hip fracture so deadly — and so debilitating? And how can a seemingly healthy person experience such a dramatic decline from what is essentially a broken bone? The answers have less to do with the break itself than with the response to the break, not just in the hours immediately following but also in the weeks and months post-injury.

Not surprisingly, most young people who fall don't break a hip. But as we age and our bones weaken, a fall that our children or grandchildren might walk away from could put us in the hospital, facing major surgery. That surgery carries risks, yet so does the immobility caused by a broken hip. When you're bedridden and hospitalized, your odds of everything from bedsores to pneumonia increase dramatically.

As people age, they also experience what doctors call comorbidity — multiple ailments at the same time. "Most older adults have at least one chronic condition, such as diabetes or heart problems. Many have two. Then they fall and break a hip. Their whole system is thrown into a tizzy," says Lynn Beattie, vice president of injury prevention for the Center for Healthy Aging in Washington, D.C.

Next: Improve your odds of recovery. >>

"A hip fracture is an insult to the system, and that changes many metabolic functions," adds Jay Magaziner, Ph.D., chair of the department of epidemiology and public health at the University of Maryland School of Medicine in Baltimore and an expert on hip fractures. "There is something about this kind of injury that amplifies things."

You can, however, improve the odds of a good recovery. The first thing to do is repair the hip as soon as possible. A recent study in the Canadian Medical Association Journal finds that the risk of death from a hip fracture declined by 19 percent when surgery was performed within three days of the break.

Assuming reasonably good health at the time of the fracture, standard care consists of surgery within 48 hours, for a total of four to six days in the hospital, followed by two to six weeks in a subacute rehabilitation facility, with another three to four weeks of outpatient or home-based rehabilitation.

Then the real work begins — a point lost on many who have endured a hip fracture.

"It's not the fall, but the response to the fall," says Patti League, R.N., lead trainer of A Matter of Balance, a program that works with older adults to reduce their fear of falling. "How do you live after the services end? How do you keep your fear of falling again in check? In short, how do you get your life back?"

The answers are both simple and complex. Simple in that you must take advantage of all services available until you are back to where you were before the fracture. Complex in that older adults are fighting a powerful bias that says partial recovery is okay.

"We like to say it's only a broken bone, and bones heal," says Rebecca Craik, Ph.D., chair of the department of physical therapy at Arcadia University in Glenside, Pennsylvania. "But when you're an older adult, the bar is often set too low. 'It's good enough just to be home. It's time in your life to rest.' Patients and their caregivers often don't push to get where they were before the surgery."

Part of the problem, Magaziner says, is that after a few months, just as the patient gains the ability to endure the intense physical therapy that will restore pre-fracture mobility and functionality, the infrastructure for care evaporates. What's needed, he believes, is continuing, reimbursed, multicomponent intervention tailored to each patient. In the meantime, those who have suffered a hip fracture can do much on their own.

Next: 4 tips for surviving a hip fracture. >>

Exercise every day. "Bones heal better when they are used," just so long as the bones are stabilized, says Douglas P. Kiel, M.D., director of the Musculoskeletal Research Center at the Instutute for Aging Research at Hebrew SeniorLife in Boston. "Any sort of weight-bearing activity can stimulate the bone to heal." Just start slowly, and gradually increase the amount of weight you place on the hip. 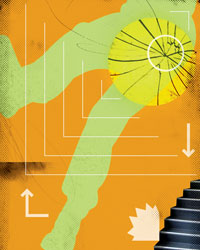 Exercise can help your bones heal.

Pay close attention to diet. "Take in enough protein to build up muscles," syas Kiel, "and enough calcium and vitamin D for your bones to gain strength." A recent study found that those who consumed fewer than 46 grams of protein a day suffered 50 percent more hip fractures than those who ate more protein. You'll also need at least 1,200 milligrams a day of calcium (the equivalent of three to four servings daily of milk, yogurt, or other calcium-rich foods) and 600 to 800 international units of vitamin D, either in supplement form or from fortified foods or daily exposure to sunlight.

Socialize. The contact feeds on itself. More social interaction leads to a stronger desire to get out of the house, which provides more impetus for better self-care. "Staying home is not the answer," says League. "it's about staying engaged."

Keep at it. "Therapy was a lot of work," says Isabelle Jackson, who, after a week in a hospital and nearly two months of supervised physical therapy, relied on a daily dose of short walks and volunteer activities to restore her physical and mental well-being. "You have to make up your mind that you are going to do it. It's all about attitude."

You may also like: 6 simple ways to prevent falls. >>