Older adults who suffer from depression may find lasting relief by practicing a flowing Chinese martial art called tai chi in addition to receiving more traditional treatment, according to a new study.

Patients who regularly performed tai chi while taking a prescription antidepressant were more likely to recover from their depression, compared with a group who just attended health lectures while taking the drug, researchers found. 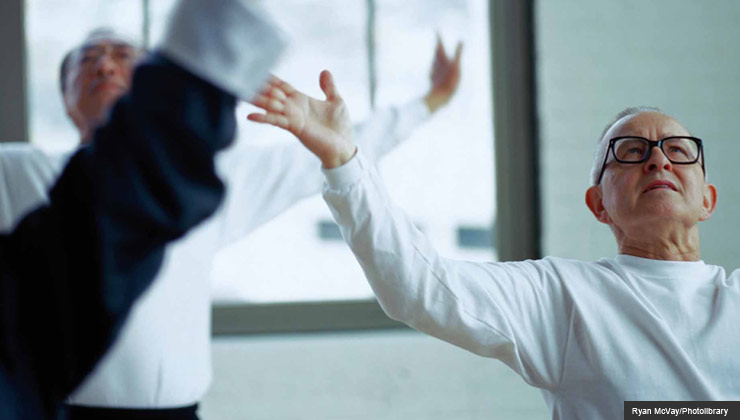 Tai Chi can be seen as a complementary treatment for depression.

Tai chi is known to improve balance and mobility, but the study published in the American Journal of Geriatric Psychiatry was the first to examine whether it helps with depression, says Helen Lavretsky, M.D., a professor of psychiatry at UCLA.

She and her team studied 73 people age 60 and older with major depression who had seen only partial remission of their symptoms while taking the antidepressant drug escitalopram (Lexapro). They were randomly assigned to a health education program or to classes in tai chi chih, a simplified version of traditional tai chi. Each group met once a week for two hours over 10 weeks and were asked to perform daily exercises at home.

While depression symptoms were alleviated in both groups, 65 percent of those in the tai chi class achieved remission, but the same was true for only 51 percent of the health education class.

The tai chi patients also scored better on cognitive tests and had lower blood levels of C-reactive protein, a marker for inflammation in the body. Inflammation is "the common denominator" in many ailments older people face, including depression, Lavretsky points out.

Tai chi practitioners repeat a sequence of fluid movements while paying attention to their breathing. Lavretsky calls it "meditation through movement."

Clinical psychologist Patricia Marino, assistant professor of psychology at the Weill Cornell Medical College specializing in geriatric mental health, describes Lavretsky's research as "very promising." She notes that most in the tai chi group did not see their depression return after the 10-week class. Frequently depression does return after a treatment is discontinued.

"Just the fact that people are more active is probably a very important component," Marino says.

But tai chi should be seen as a complementary treatment. More traditional treatments "like medication and psychotherapy are important as well," she points out.