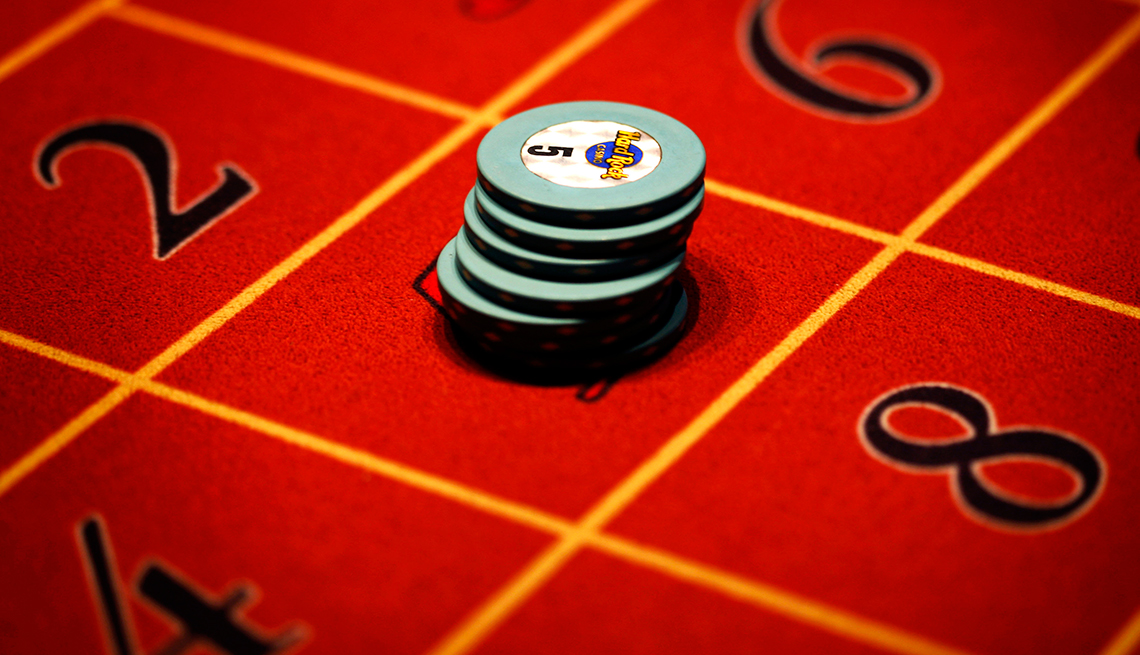 Those with dementia may be at high risk for a gambling addiction.

En español l "It was like electronic heroin," Maureen O'Connor said of the machine she thought she could beat. "You know, the more you did, the more you needed — and the more it wasn't satisfied."

But in the end it was the machine that beat O'Connor, leaving the former San Diego mayor and heiress to a $50 million fortune all but destitute. At 67, she now lives with her twin sister instead of in the beachfront estate in La Jolla that she and her late husband, the founder of the Jack in the Box fast-food chain, once called home.

O'Connor's addiction to video poker ("that machine," she called it) was all-consuming. In nine years she placed more than $1 billion in bets at casinos in San Diego, Las Vegas and Atlantic City. O'Connor, in fact, was such a high roller — a "whale," to use the industry's not-so-flattering term — that Vegas casinos would send a private jet to pick her up in San Diego. She didn't disappoint. "I could lose more than a hundred thousand in a day," she told an interviewer last February. (O'Connor, through her attorney, declined to be interviewed for this story.)

As her losses mounted — eventually reaching something like $13 million, according to her lawyers — O'Connor did what eventually landed her in a federal courtroom, charged with the felony crime of money laundering: She took $2,088,000 from a charitable foundation set up by her husband in 1966, depleting its assets and leaving it insolvent.

What caused O'Connor — a onetime champion swimmer, San Diego's hard-charging "Mayor Mo" from 1986 to 1992 — to fall into such an abyss? She herself blamed an addiction to gambling made worse by a brain tumor, diagnosed in 2011. Her lawyers noted in court filings that she turned to gambling in a big way sometime around 2001, as she continued to struggle with pain and loneliness following the death of her husband. "The pattern," her lawyers wrote, "fits the syndrome known as grief gambling."

Under a deferred-prosecution agreement, O'Connor promised to undergo treatment for gambling addiction, repay the money she took from the foundation and cover the tax liability associated with her misappropriation of funds.

While O'Connor will never see the inside of a prison, others aren't so fortunate. Marilyn Lancelot lost almost everything, too: two homes, her car and her life savings. But it wasn't until police arrived and led her off in handcuffs that her life finally hit rock bottom.

Deep in debt, she'd begun forging her boss's name on checks and cashing them to feed a runaway gambling addiction. "There wasn't anything I wouldn't do to get more money to gamble," says Lancelot, 83. Convicted of embezzlement, she spent almost a year in prison.

The number of casinos has exploded over the past few decades. In the 1960s, only Atlantic City and Nevada had casino gambling. Today, casinos operate in more than 30 states. Add state lotteries, Powerball and now Internet gambling sites, and there are plenty of ways to try your luck and lose a little cash. Many adult communities, assisted living centers and even churches organize outings to nearby casinos.

It's easy to understand why they are a big draw, says Jon Grant, M.D., a professor of psychiatry and behavioral medicine at the University of Chicago. "Casinos are full of sights and sounds where older people can feel safe. They're handicapped accessible. You can go in any kind of weather."

In fact, experts say, older Americans are the fastest-growing segment of gambling addicts. For about 8 percent, it's an addiction that can cost them their retirement nest egg.

"About 40 percent of the people we see are over 50," says psychologist Robert Hunter, who directs the Problem Gambling Center in Las Vegas. "Many of them are people who got into trouble after retiring and moving to a place where casinos are a big part of social life."

Compulsive gamblers are also likelier than others to show up in emergency rooms, reflecting their poor health and chaotic lives.

"The worse the gambling disorder, the worse the chronic health conditions we typically see," says University of Iowa psychiatry professor Donald M. Black, M.D., one of the country's leading experts on compulsive gambling.

In 2013, for the first time, the American Psychiatric Association officially recognized compulsive gambling as an addiction (rather than a personality disorder), acknowledging that it shares many features with alcoholism and drug addiction.

Alarmingly, in one recent study, 32 percent of problem gamblers reported that they had considered suicide within the past year.

The nation's $40 billion a year gambling industry aggressively targets older customers, as they have accumulated wealth and are especially vulnerable, experts say, to wagering more than they can afford. The enticements range from free bus trips, meals and even discount prescription cards to "comped" hotel accommodations — not to mention the private jets dispatched to pick up high-rollers like O'Connor.

"One of the lessons of the Maureen O'Connor case," says Philip Halpern, the assistant U.S. attorney who prosecuted her, "is that it demonstrates the extreme lengths to which casinos will go to lure in high-stakes customers."

Gambling-industry marketers also know that advancing age, and the declining cognition that sometimes goes with it, can reduce a person's aversion to risk. "With age, there can be a decrease in the activity of decision-making parts of the brain related to executive functioning," Grant says. "If you have a deficit because of age, gambling may become riskier for you."

Older people with dementia are at especially high risk because they are unable to recognize limitations or use appropriate judgments. And dopamine agonists, a class of prescription drugs used to treat the symptoms of Parkinson's disease and restless legs syndrome, seem to be associated with compulsive gambling as a side effect, according to Marc Potenza, M.D., a professor of psychiatry at Yale University who studies problem gambling.

Psychologists also suspect that people are more likely to run into problems if they turn to gambling for the wrong reasons — to escape loneliness, depression or even chronic pain.

"For a lot of the older people we see, it was never about the money," says Gordon Greco, 62, a compulsive gambler most of his life who now works as a counselor for the Problem Gambling Center in Las Vegas. "They go to the casino to escape regrets, loneliness, isolation, sadness. And when they start losing money, they find themselves with even bigger problems and regrets."

Video gambling machines, now permitted in more than 40 states, are the overwhelming favorite among older casino-goers, Hunter says. And that puts them at even greater risk. Although any kind of gambling can become addictive, video slot and poker machines are the most seductive because they offer the greatest escape, experts say. "Machine gambling is really the crack cocaine of compulsive gambling," says Lia Nower, the director of the Center for Gambling Studies at Rutgers University in New Jersey.

Indeed, in Addiction by Design: Machine Gambling in Las Vegas, Massachusetts Institute of Technology anthropologist Natasha Schull argues that mechanical rhythms that lull players into a trance-like state are deliberately built into electronic gambling machines. In what Schull calls the "machine zone," gamblers quickly lose track of daily worries, social demands and even their bodily needs.

Some psychologists and psychiatrists specialize in treating gambling addiction. Compulsive gamblers, these experts say, suffer from low self-esteem and fall into two broad categories: action gamblers, who relish excitement and believe they can beat the house, and escape gamblers, who seek to forget about pain or trauma in their lives.

Gamblers Anonymous programs are available in most parts of the country. Breaking a gambling addiction isn't easy, but GA programs do help some people.

"It saved my life," says Marilyn Lancelot. After being released from prison, she began attending GA meetings. She slowly paid off her debts and has managed to steer clear of gambling. "For a recovering gambler, there's always the itch to try it again," she admits. "But I know now that if I give in to it, I'm dead."

Ben Affleck The actor and filmmaker checked into a $33,850-a-month rehab center in Malibu, Calif., in 2001 for gambling and alcohol addictions.

Charles Barkley In 2006 the former NBA star pegged his gambling losses at $10 million, including $2.5 million blown in just six hours at the blackjack table.

William Bennett Dubbed "one of the nation's most relentless moral crusaders" by the New York Times in 2003, Bennett was a high-rolling gambler who racked up losses of more than $8 million at casinos.

Pete Rose The former Cincinnati Reds player and manager, who faces a lifetime suspension from baseball for betting on his own team, once incurred a debt of $400,000 to a bookmaker over a three-month period in 1987.

John Daly The so-called bad boy of the PGA Tour has put his gambling losses at more than $50 million over 12 years.

Gladys Knight The Empress of Soul once had a $40,000-a-night addiction to baccarat that she beat with the help of Gamblers Anonymous. "I would play every day if I could," she recalled in her autobiography.

Omar Sharif The film star and bridge expert ran up such mammoth gambling debts that he'd tell his agent to "accept any part, just to bail myself out," he said.

Terry Watanabe The ex-president of his family's party-favor import business in Omaha, Neb., lost at least $205 million to casinos in Las Vegas, including more than $120 million in 2007 alone.