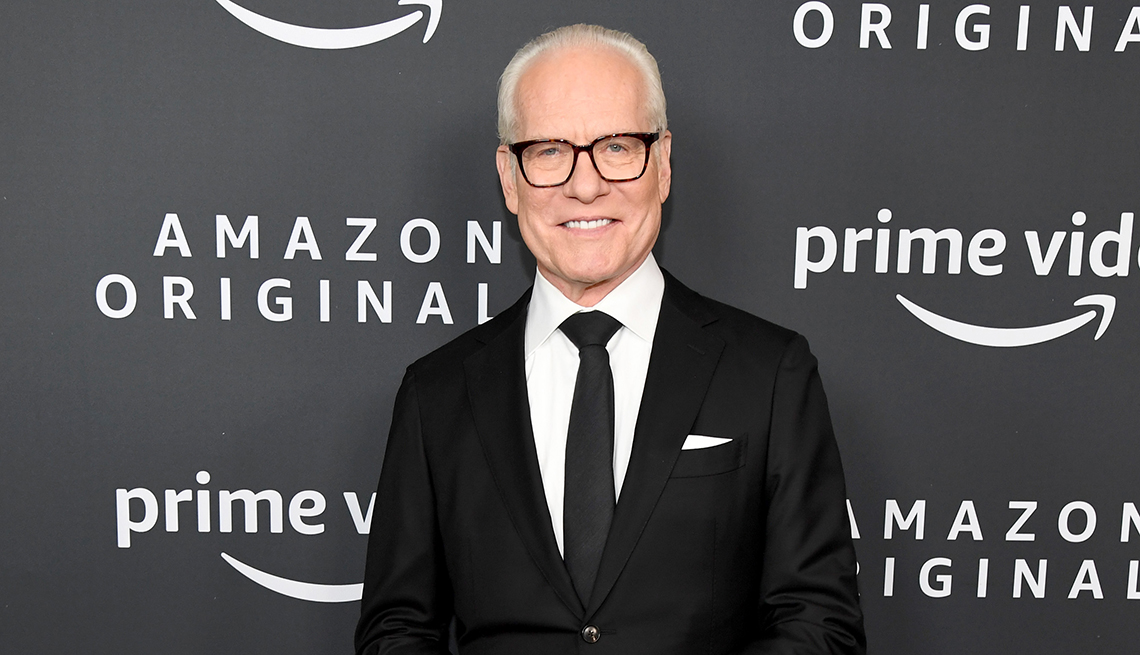 En español | Project Runway style guru Tim Gunn reunites with Heidi Klum for their new show, Making the Cut (Amazon, streaming starting March 27), where 12 designers battle for $1 million and their own exclusive line for Amazon Fashion. “Heidi and I wanted to interact more — on Project Runway we barely do,” says Gunn. Each episode's winning look will be instantly available for $100 or less on Amazon.

Especially for AARP members, Gunn offers his expert fashion advice for people over 50.

How to “dress your age"

I'm 66. I feel fortunate that I have a uniform, in a manner of speaking. I don't chase trends. Getting our fashion right is all about silhouette, proportion and fit. When they're in harmony and balance, you look great — no matter what you're wearing.

On a photo shoot, I did an intervention with two women in their 50s. One I would describe as a grandma Jezebel — she was dressing like her teenage daughter — and the other was just dressing dowdy. She said, “I'm 52, aren't I supposed to be dowdy?” I said, “No, never. There's no excuse for it.” That doesn't mean you have to turn into the Jezebel and wear miniskirts!

1. Do have these essentials. A blazer, dress pants, dress shirt, trench coat and dark washed jeans. Not necessarily a Brooks Brothers navy blazer with gold buttons, just something you can remove in your office, but if the boss is coming, put it on. A trench coat you can wear to the grocery or the opera.

2. Do watch skirt and pant length. For mature women, skirt length should be at or around the knee. Never down to the calf. Once your miniskirt inches up closer to the hip, I don't care what age you are, it becomes vulgar. The three-quarter-length pant cuts you off at the widest part of your leg. It makes you look wider and shorter. Everyone I know aims to look as long and lean as possible.

3. Don't rock crop tops. Which seems so obvious, but people can be rather delusional.

4. Don't wear leggings as pants. When did the legging become a pant? It's just absurd. And ubiquitous.

6. Do find a sweat suit alternative. The wrap dress is the easiest thing in the world to put on. It's comfortable, it has stretch. You feel like you can conquer the world. As opposed to running out to get a quart of milk and then you run into your former boyfriend.

7. Men: Leave shorts and tanks in the gym. I'm a bit of a prude. Shorts and tank tops are things no men should ever wear, unless you're by the pool.

Save sweatpants for workouts

Tim Morehouse, the Olympic fencer, was the first person to get me into a pair of sweatpants. I started fencing at 62 in his club. When I'm actually fencing, I'm hooked up to all the electronic gear and I'm wearing a fencing uniform. But for practice I'm just in J.Crew sweatpants and a Tim Morehouse T-shirt. It's a workout for the body, more importantly a workout for the brain.

It's OK to wear flats

A lot of fashion editors madly running around New York only wear flats. Heels are just too much wear and tear. Flats are not going to be a Bass Weejun slip-on, they're dressy. Kate Spade has a lot that are great. Tory Burch has a classic flat. They're something you can wear proudly.

Look to style icons — and yourself

I admire more mature women. I've always admired Nancy Pelosi's wardrobe. I love Helen Mirren's style, whether she's casual or on the red carpet; she just looks polished and sophisticated. I asked Cate Blanchett, “How is it that you never seem to get this wrong?” She said, “I'll tell you exactly how: I only listen to my own voice. I have stylists in my ears telling me to do this or do that, but if it doesn't resonate for me, it's not going to work.”

If you're a Sally Field, don't dress like a Tilda

I had a tiff with another fashion commentator who criticized Tilda Swinton's off-the-shoulder black amoeba-like gown. She looked fantastic. Would you put this dress on Sally Field? No, she'd look ridiculous. But on Tilda Swinton it just seemed very fitting. She's a bohemian.

Most of the men I know are wearing suits that are at least one or two sizes too big. I can't stand the refrain, “Well, I'm comfortable.” If I wanted to be comfortable, I would never get out of bed.

It doesn't have to cost the earth

When I was appointed chair of the Parsons fashion design department, I wore suits and ties, and jeans while teaching. My friend Diane von Furstenberg said, “You can't be running this department looking like this. You need to look more modern.” So I bought a $1,200 black leather jacket at Saks. I staggered out of Saks in apoplexy and into a Banana Republic across the street. I bought a $400 black leather blazer and returned the $1,200 one and felt physically lighter. I wore that with a black turtleneck and black jeans for three years. And Diane approved.

It's where you can have fun or be serious — just be yourself. If you're going to chase a trend, chase an accessory trend. It's a lot safer than buying that trendy Prada skirt, which everyone will know is last season next season.

More on Style and Entertainment