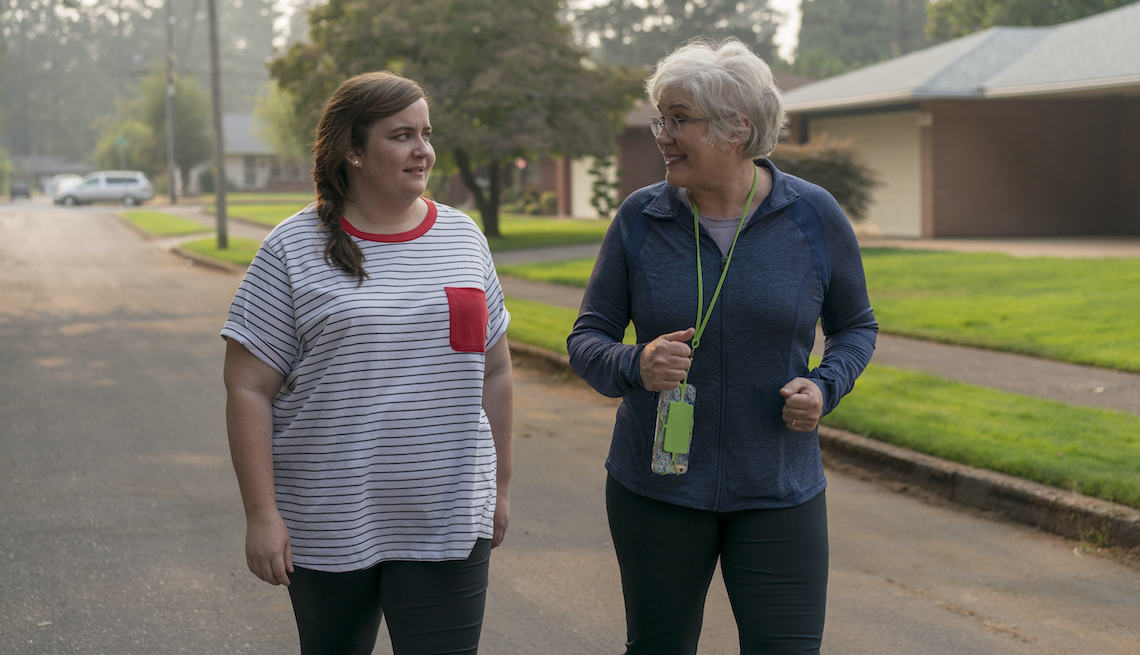 Julia Sweeney left Saturday Night Live in 1994 to make films with Rotten Tomatoes scores ranging from zero percent (It’s Pat) to 94 percent (Pulp Fiction); the Quentin Tarantino-produced Broadway show, film, and Grammy-nominated album God Said Ha!, about her family’s bouts with cancer; several well-reviewed books; and dozens of other movies and stage and TV shows. Ten years ago, after getting married to her husband, Michael, by SNL’s Don Novello in character as Father Guido Sarducci (in real life an ordained minister), she quit Hollywood to be a full-time mom in Illinois.

And now, at 59, she’s back at work, playing SNL’s Aidy Bryant’s mother and the caregiver for an ailing spouse in the new hit Hulu show Shrill, as well as a crazy lady on 9-1-1. She's also packing sold-out theaters with her new monologue show, Older & Wider. Its Los Angeles Times review was headlined, “Julia Sweeney Is ‘Older & Wider’ and Really, Really (Really) Funny.” “The stage show is about me trying to get back into show business after 10 years off,” Sweeney says. “Amazon Prime and Netflix are coming to see it, and if they don’t want to film it, I may.”

An even bigger break for Sweeney is Shrill, starring Bryant as a Portland alternative weekly reporter triumphing over fat-shamers, rotten boyfriends, and her infuriating yet well-meaning mom. “I told my husband this would be the best time to be hit by a bus because I’ve just reached peak happiness. I love Aidy Bryant — she’s so lovable and funny, and not uncomfortable being sexy. And she’s not filled up with shame, as I am. I guess Lorne Michaels [SNL boss and Shrill executive producer] had mentioned me from the start to play her mom. I think we look a little bit alike. I feel like I’m back in the family — and I mean that in the mob sense. I keep trying to get out, but they keep sucking me back in!” she jokes.

“My character is in some ways the villain, because I’m always trying to get her on a diet and exercise, and the show is all about accepting yourself without trying to change yourself. I can’t help but try to be a help, ordering prepackaged diet food to be delivered to her apartment, which is a bad idea. But the character is so compassionate and understandable and sweet. I think it’s how Aidy’s character would be handling it if she were me.”

“It is shocking just to be older in Hollywood. People try to be nice to you in that way, like you're an ‘elder.’"

Sweeney is fulfilling many grownups’ fondest dream — finding meaningful work after reconsidering retirement — but she sometimes feels like Rip Van Winkle, waking up to a changed Hollywood. “It is shocking just to be older in Hollywood. People try to be nice to you in that way like you're an ‘elder.’ When I left, you still went in to audition. Now you have that whole contraption you stick your iPhone on, and you send in your audition. The executives are much younger. It’s like what Pamela Adlon, 52, said about the young people in the industry: It’s like they’re zombies or something, and there’s more of them, and they just keep coming and coming."

Sweeney’s newest monologue, I as Well, is partly about her confrontation with youth culture. “It’s about my very complicated relationship with the #MeToo movement. I felt that while 80 percent of it was the greatest thing ever, there was this collateral damage of people like Al Franken, who was horrendously treated. And it turned in to a conversation with me and younger feminists. We both teach each other things. I definitely learned a lesson from a younger, angrier generation, I mean, sure. But I also think that they're naive in some ways, especially about how men and women are a social construct, things that I think are biologically based. And I think I'm right, you know.” She did 12 workshops of the controversial play/film in progress, with opposite responses. “Four went great ... I thought the greatest thing I’d ever written. Four were mixed. And in four, the audience was silent. I’d sit in the driveway, sobbing in my car, and people would come to my house and say, “You can’t do that show and say what you’re saying.”

But for the most part, Hollywood is welcoming Sweeney back, big time. “There’s so many jobs — show biz is a moving train, and around every corner, you’re just trying to see where do you want to fit in.”

So can a grownup long out of work make it in today’s youth-culture entertainment capital? “I think so,” Sweeney says. “I mean I do think so — but maybe I’m just being optimistic.”