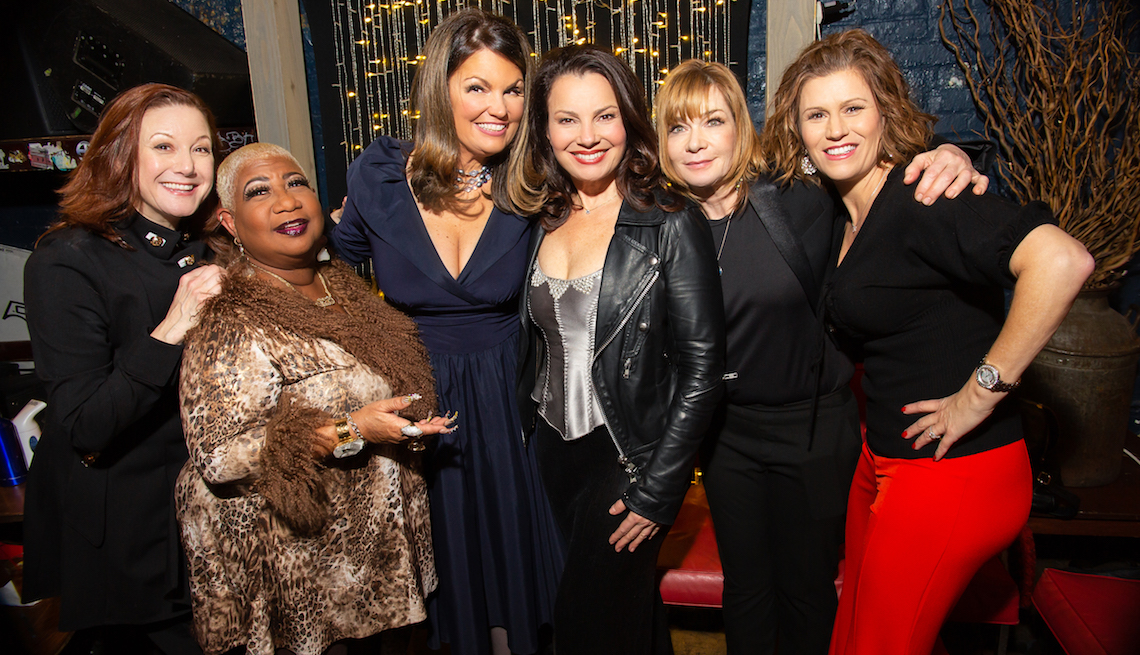 En español | Fran Drescher, 61, headlines the first TV comedy special in history to feature multiple women over 50. Funny Women of a Certain Age (Showtime, March 23, 9 p.m. ET) also stars Carole Montgomery, 61, Luenell, 60, Lynne Koplitz, who turns 50 on June 13, and Kerri Louise and Vanessa Hollingshead, who don’t publicize their ages. AARP asked the honking comic Drescher about her new NBC show, the possible revival of her hit The Nanny and the fact that her entire career resulted from a chance encounter on a plane flight.

Carole Montgomery, who produced Funny Women of a Certain Age,  jokes, “When you turn 50, you’re like Mr. Potato Head, and your genitals just fall off. Nothing’s left.” But that simply isn’t true, is it?

Fran Drescher: No! Thank God, they are very active and healthy.

Your career is healthy, too. You’ve got this comedy special, and you play a grandma with a Brooklyn accent on NBC’s comedy pilot Uninsured.

Drescher: I play a somewhat unorthodox mother and grandmother who may not be the normal, stereotypical mom. She’s a funny, glamorous, immature personality.

Women of a certain age are having comebacks lately: Roseanne — who you beat in the ratings with your show The Nanny — was a hit before her self-destructing tweet, Will & Grace is killing, SNL’s Julia Sweeney is back on Shrill. Are things getting better for grownup comics?

Drescher: I feel like I'm at the right place at the right time. I mean, baby boomers are the largest population on the planet, and we’re all in this together, so there’s always an audience for our experience. It really helps to write your own material. Julia Sweeney’s show at the Geffen Playhouse was sold out [for two weeks] when I saw it, and she writes her own material — she’s not waiting for the phone to ring.

Do you have a lot in common with your Funny Women of a Certain Age colleagues?

Drescher: These ladies might be a little more risqué. I try to keep it more wholesome. Because I don’t really do clubs, where you go a little farther — the audience is drinking, they expect a certain tone. I’m honing my act more for charity events, fundraisers, like my Cancer Schmancer movement. We’re releasing a free education video on Earth Day, April 22, starring Jamie Foxx [51], Jeff Bridges [69] and myself.

You don’t actually have to make money, thanks to The Nanny. And you owe it all to accidentally getting seated next to an executive on a plane.

Drescher: Yes. Jeff Sagansky, the president of CBS. I said, “Jeff” and he said, “Fran” and I thought, “Thank you, Lord.” And I ran to the bathroom to put some makeup on. And then he was a captive audience for three hours — where was he going to go, coach? And amazingly on that trip, I thought up The Nanny.

Which led to a dozen Emmys, two Golden Globes and fame for your voice — which the New York Times likened to “the sound of a Buick with an empty gas tank cold-cranking on a winter morning.” And you’re considering rebooting The Nanny, right?

Drescher: I would be open to redeveloping the character for a young woman — I thought of Cardi B as Fran Fine. We would leverage the brand but bring it into this century. If I were available, I could play Sylvia, Fran’s mom. But I don’t have to be in it, it could be a whole new cast. I would write and produce it with my team, and that would be fun for me, too. You know, I made money on that show. I don’t need to take something that was a classic and then see what happens to these characters 20 years later. I did it. I like doing new things. So we’ll see.

Why is there such enthusiasm for classic TV reboots?

Now your comedy act is not just for laughs. It’s like the motto of that magazine Highlights for Children: “Fun with a purpose.”

Drescher: I get into my cancer survival. I like finding the humor in real-life experiences that people can relate to, that may be from the depths of despair. The women that I aspire to be like include that in their acts — things that are meaningful to them. Now it's a matter of finding your brand of comedy and how it suits you at this stage of life.