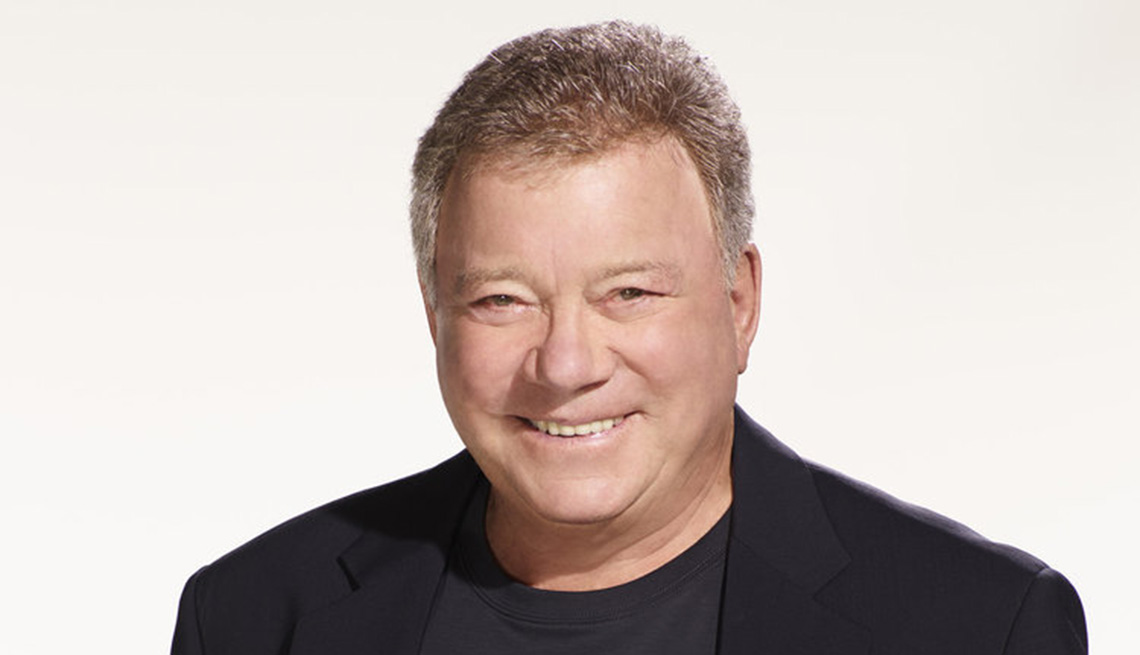 William Shatner, 87, isn’t just the Emmy-winning star of Boston Legal and Star Trek; he’s a singer with two 2018 albums — one country (Why Not Me?), one for Christmas (Shatner Claus) — an entrepreneur and author of the just-published autobiography Live Long And…What I Learned Along the Way. We caught up with the octogenarian polymath, whose career has hit warp speed.

Does it help you stay young being au courant in so many currents at once?

Yeah, except the bones are stiff as I mount up the the stairs to the stage; the muscles are stiff. But when I get onstage, it looks like I know what I'm doing.

The book is like a guided tour of your life.

Yes. I'm very conscious of my age, the proximity of dying, and wanting to leave something. I have 15 kids and grandkids. Just blundering on and hoping for the best — I think that's the story of my life.

Sounds like your song that goes, “Live life like you’re gonna die/Because you’re gonna.” Yet you’re insanely durable. Any health tips for us?

I wake up every morning thinking, I’ve got to keep myself in shape to ride horses. Last week I won a world championship in Louisville. This morning my horse knelt down and started to roll, and I had to jump and roll off his back. I get into a pool for half an hour a day, running in place, doing arms and leg exercise.

I got Pedego Electric Bikes for the whole family, and 15 of us now bicycle on a regular basis. I couldn't attract my little grandchildren — “No, I’ve got friends I’m gonna see” — and all of a sudden, everybody's enthused about going to a great restaurant in Santa Barbara and bicycling back. A family unit that was always somewhat tight became a hugely cohesive group.

Exactly. That's hysterical. We could grow beards and call ourselves the Pede-gogos.

Do you recommend any kind of diet?

Stay away from fats, salt and sugar; eat lots of fruits and vegetables, fish and chicken.

"You stay in bed, you’re gonna rot. And I can’t rot, because I have too much to do."

You started out in TV with youngsters like Steve McQueen, whose Great Escape poster faced my poster of you in my 1967 bedroom.

Steve and I did The Defenders, a great show.

Research shows that constant learning improves memory. Does that early memorizing-dialogue experience — sometimes on live TV, where you mustn’t forget — keep your mind in shape now?

I just filmed five days in Toronto, and the producer called me an animal because I did 10 pages a day. All that memorization, that's hard work. There’s the odd word I have trouble remembering, and then it comes to you. I’m thinking, Shoot, is this the end? Is the plug pulled now and I can't remember anything? But I can remember. I'm 87 years old and memorizing 10 pages a day.

Since you turned 80, you’ve done 65 movies and shows. Are you planning to retire?

Why? What are you gonna retire to? I mean, I don’t fish and don't play golf. I ride horses a lot. But what are you going to do? You can’t sit and rock. Well, you can sit and rock, but you have a guitar in your hand. My first album this year is a country music album. I’ve been invited to sing one of the songs at the … what do you call the country music thing? The Grand Ole Opry. In February, to sing one of the songs on the album.

Are you going to sing “Friends Don’t Let Friends Drink Alone” or “Too Old to Be Vegan”?

I’m not sure. For the Christmas album, I just made a video about Rudolph the Red-Nosed Reindeer. We do a punk song, which starts off as calmly as most versions and then goes into punk music. Each of these Christmas songs I want to bend a little to some creative juice. “I’m Dreaming of a White Christmas” — I make it into a dream sequence. Then, slowly, Judy Collins comes out singing with that glorious voice the standard version, and I'm urging everybody, “Be quiet! I'm dreaming here!”

I’m at my creative zenith right now. I'm doing more with scripts and stories than ever before. They've asked me to do a blues album with Billy Gibbons, so I've come up with a hook that I think would make a great blues song.

You’ve got some sorrow in your book: your chilly relationship with your mom, the wife you found drowned in your pool, Leonard Nimoy’s mysterious rift with you after a lifetime’s friendship.

Well, sorrow. You know, there is an image that I have held close and made it mine: We were born out of stardust, and we have consciousness. I was reading a book on animal feelings, about a crawfish they gave antianxiety medication that humans use. Even as primitive a being as a crawfish has feelings, and the extension of that is that we are born into this life and we become conscious, and we take in the majesty of the universe and of the awesomeness and the bewilderment of life. We’re given that moment to ponder.

Talk about ups and downs — after Star Trek was canceled in 1969, you lived in your truck with your dog and did summer stock for three years.

I had $1,800 and three children. As we were getting divorced, my wife moved to Beverly Hills.

Did you really make $600 million on stock options as Priceline’s spokesman?

But it was great for your image — many younger people know you from Priceline, not Star Trek.

Partly, your book is an advice book. What’s your main life advice for grownups?

It's the doing; it's the yes! Go! You've got to get in the f---ing van. If you're saying, “I'm so tired, I ache, I’m just going to sit,” it’s true, it's easier. Don't move or your shoulders hurt. But that's the easy way out. Get up and move the shoulders so you get some motion and … what’s the name of the fluid in your joints?

It's a perfect metaphor for the creative process.

Exactly. For your mind!

Yes, especially in your mind. Goodbye!