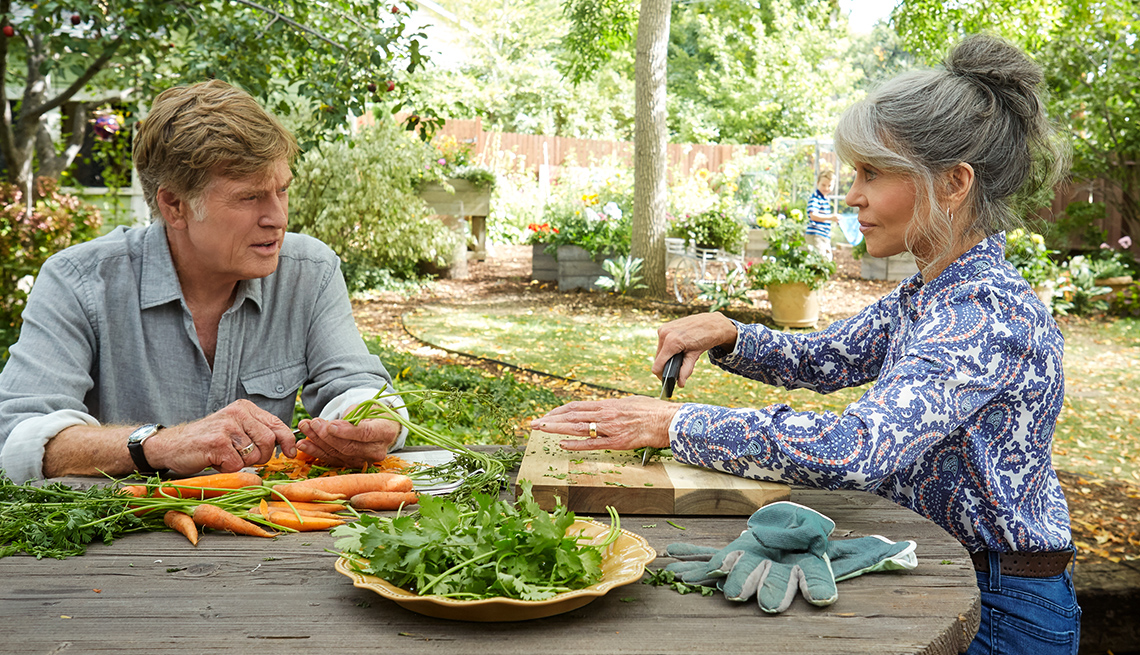 "Our Souls at Night," set in a Colorado town, reunites Robert Redford and Jane Fonda nearly four decades after their last film together, 1979's "The Electric Horseman."

Where to Watch: Netflix (and limited theatrical release)

"He doesn't like sex scenes," said Jane Fonda, 79, pointing at Robert Redford, 81, at the Venice premiere of Our Souls at Night, their fourth film together. "I live for sex scenes! It was fun to kiss him in my 20s and to kiss him again in my almost 80s." Half a century after Redford played Fonda's uptight husband in Barefoot in the Park, they’re together again in this lovely last-chance romance by Ritesh Batra, based on the posthumously published last novel by Kent Haruf.

Actually, it's more fun to watch this screen couple build up to a kiss now because they're better actors, especially together. In 1967, they had chemistry and Barefoot writer Neil Simon's killer quips, but Redford was prettier than Fonda, each was confined by a sexy persona, and she didn't know what she was doing, career-wise at least. (She turned down Rosemary’s Baby and Bonnie and Clyde for Barbarella). Now he's a weathered hunk, she's prettier, and they're both so good that you forget they are incandescent legends and think they're just regular folks seeking warmth as the world grows cold. Fonda said it felt like Barefoot in the Park — "I couldn't keep my hands off of him" — only the sex is sweeter. "You know your body better, so you’re not afraid to ask for what you need. I think on a love and sex level, it just gets better.”

Both play widowed characters who live in neighboring homes in romantically picturesque Colorado, and neither can sleep alone. He's as sad as an Edward Hopper painting, hunched over microwaved macaroni in a big chair like a cage. Yet when she proposes that they sleep together — platonically, of course! — he asks if he can think it over. The affair grows slowly, like ice crystals ramifying on a Colorado window. There's some social satire of small-town gossips led by Bruce Dern, who makes nasty wisecracks about the couple. But the vibe is less like the satire of Dern's 2013 film Nebraska and more like Redford's earnest, heartfelt Ordinary People, which won him an Oscar for best director in 1981 on his first try (plus best picture and two other wins). 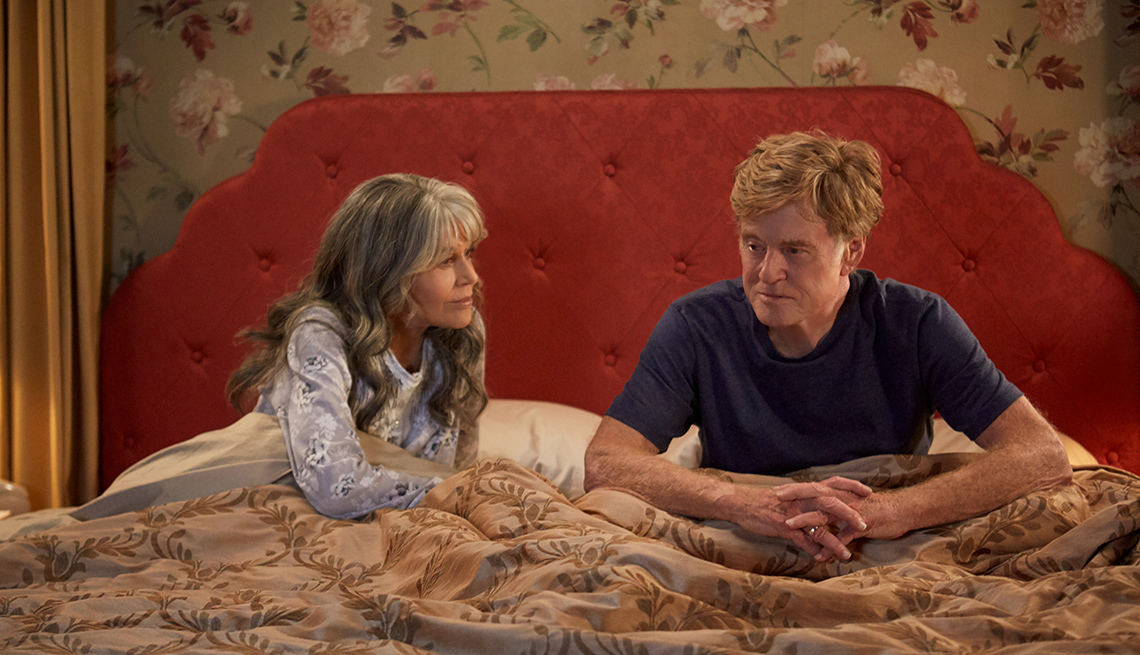 There's still a hint of the couple's old Barefoot roles. When she says, "Tell me something about yourself," she's teasing, like her 1967 character who pretended to be a call girl to make her staid husband blush in an elevator full of suddenly disapproving glances. But she isn't kidding about demanding intimacy, and the stories they tell each other of tragic marriages, infidelity, soul-seared children and broken dreams are both sentimental and realistic.

Judy Greer has a genius scene as Redford's emotionally scarred but live-wire daughter, and Matthias Schoenaerts balances the film's sweetness as Fonda's bitter, hard-drinking divorced son. There's something in Fonda's performance that's horrifically remote, perhaps informed by her actual painful relationship with her father, Henry Fonda. Schoenaerts' character gave up a painting career (as did both the young Redford and Fonda) for a bad marriage he now realizes was mostly his fault. 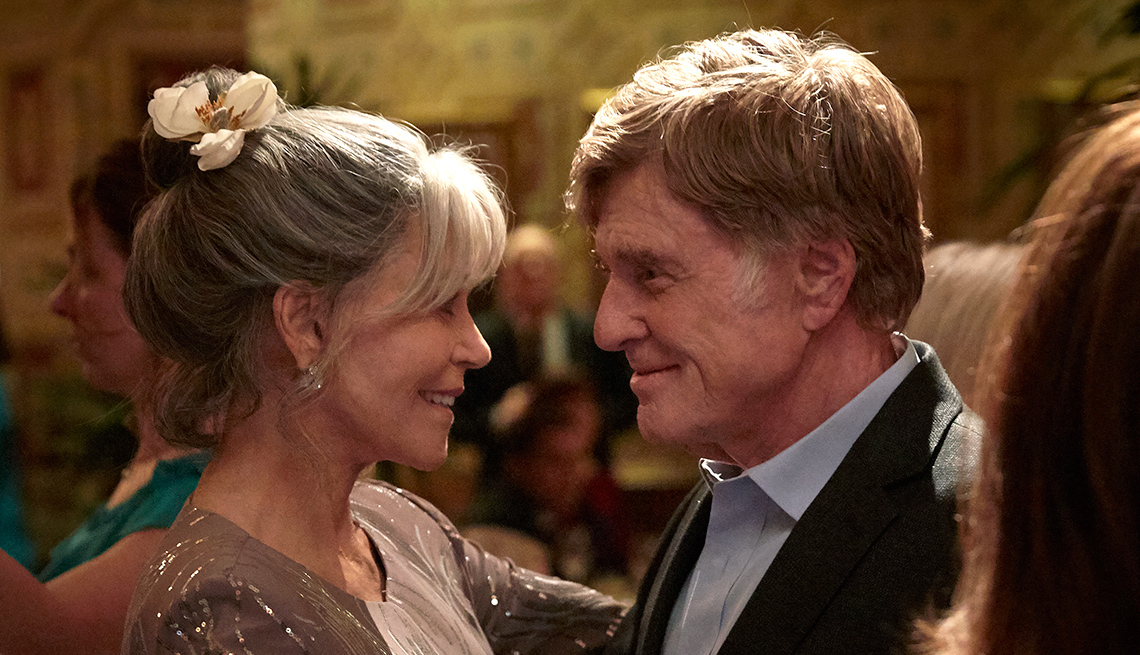 So when at long last — after one of Fonda's friends asks what the heck she's waiting for — they do decide to do something other than talk, it means something. Not every acting duo could pull off the morning-after scene, a car drive where everything important is conveyed by body language, but Redford and Fonda have 50 years of practice. Fonda is even better in this film than on TV's Grace and Frankie, where pro-grownup joshing about sexuality is more risque and silly. It's wonderful to see Redford compress himself into a rickety guy of few or no words, blossoming under Fonda's love and making her convincingly bloom, too. There are no surprises in the story, but when he bonds with her young grandson (promising Iain Armitage from Big Little Lies and Young Sheldon), it's not typical Hollywood jive emotion.

Redford and Fonda have made better movies, and director Batra's 2013 breakthrough, The Lunchbox, is a better romance. But if you want to catch two actors at the peak of their powers, what are you waiting for?