Jerry Mathers was a 9-year-old show business veteran when Leave It to Beaver premiered 54 years ago this week, with Mathers playing everyone's favorite little brother, the irrepressible Theodore "Beaver" Cleaver. 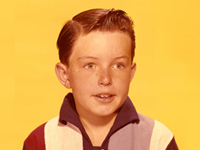 His career began quite accidentally in Desmond's department store in Los Angeles, where Mathers, then 2, went shopping with his mother. The store's public relations director approached them and said that another 2-year-old catalog model had just outgrown his clothes. Would Mathers' mother allow him to take his place and maybe appear in an upcoming fashion show? "My mom was still a little hesitant, but when the PR person said we'd pay him and he could keep all the clothes he wore, my mom said I could probably do it." Mathers laughed as he recalled the moment in a telephone interview with the AARP Bulletin.

He soon acted in his first commercial, for PET Milk, dressed in cowboy boots, six-guns, a 10-gallon hat and a diaper. More television work followed, as well as roles in Alfred Hitchcock and Bob Hope movies.

By the time he auditioned for Leave It to Beaver, he had just joined the Cub Scouts and was more intent on not missing a meeting than impressing the show's producers. "There were eight to 12 kids. I happened to be the last one called in. I was kind of antsy," Mathers, now 63, said. "The producers said, 'What's the matter, Jerry?' I said I really had to go because I had a Cub Scout meeting."

After the beloved sitcom about the Cleaver family of the fictitious community of Mayfield ended after 234 episodes, Mathers had been working for six years, with just a few weeks off every year. He was by then a teenager who wanted to take a break from acting. He attended a private boys' prep school and threw himself enthusiastically into sports, something his schedule had never allowed before.

Next page: Health bumps along the way. »

He graduated with a degree in philosophy from the University of California at Berkeley, hoping to go on to law school with the money he'd made from the show. Instead he was persuaded by a friend to become a banker, and then went into real estate and continued working as an actor. He also did a short stint, three years, as a weekend disc jockey.

Royalties for Leave It to Beaver ran out long ago, after each episode had been repeated six times, he said. But he still gets minimal royalties from later spin-offs from the show. "Just yesterday, I got a check — I forget what show it was — something in the '90s. It was 13 cents. But I have no regrets. I've done very well and I'm in fairly good shape," he said.

There have been some health bumps along the way. After Leave It to Beaver went off the air, Mathers discovered he had psoriasis and has done some events for the National Psoriasis Foundation. When he started a catering business in the late 1980s, he gained a significant amount of weight. His doctor, a personal friend, noticed the weight gain and repeatedly urged him get a physical. He resisted, saying he felt fine.

"Finally, she got me with the magic words: For Christmas I'm going to give you a free physical," he laughed. A few days later he learned his blood sugar was over 700 and he had full-blown type 2 diabetes. "My doctor asked me if I'd like to see my kids graduate from high school. She said, 'You'll be dead in a few years unless you do something about it right now.' " He lost 60 pounds and now walks or runs an hour a day on a trail near his home in Southern California.

He recently appeared in the American Academy of Neurology Foundation's patient education video and handbook, "Diabetic Nerve Pain: A Guide for Patients and Families."

Leave It to Beaver has never been off the air, Mathers said, and plays in 46 languages around the world. Nearly 20 years after the show ended, a made-for television movie, Still the Beaver, aired on CBS. That was followed by the series Still the Beaver on the Disney Channel, and later The New Leave It to Beaver show on TBS. The shows featured most of the original cast, including Mathers, who played a divorced, out-of-work dad.

Mathers' television mom, Barbara Billingsley (June Cleaver), died last year at age 94. "She was like your favorite teacher," Mathers recalled. "She was the sweetest person and she was the nicest person. I'd always call her on her birthday and she'd call me on mine."

In 2007, when he was 59, Mathers made his Broadway debut in the Tony Award-winning musical Hairspray as Wilbur Turnblad, Edna Turnblad's husband. The dancing and singing was physically demanding with two matinees a week. If he hadn't improved his health and lost weight he wouldn't have been able to accept the role, he said. "That's the pinnacle for actors," he said. "It was really fun, and it's something I really wanted to do. It's like the cherry on top of the soda."

These days, he stays busy with acting work and personal appearances, where he talks about television in the 1950s and how it has changed. "I don't think a lot of people realize the influence TV has on our kids," he said. "Kids take a lot of their cues from it in their dress and their conduct." 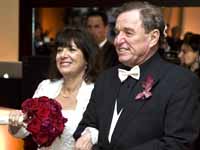 Jerry Mathers and Teresa Modnick are introduced as husband and wife.

Mathers married his companion of five years, Teresa Modnick, this year. It is his third marriage. He has three children: Noah, 33, who does sound work for television and movies; Mercedes, 29, who works in human resources for a reality television company; and Gretchen, 26, a school administrator.

A second book is in the works for Mathers (his first, And Jerry Mathers as the Beaver, was published in 1998), which will catch people up with his life as well as get the word out about diabetes. "The people I'm really trying to reach," he said, "are the people who were like me and thought they didn't have to worry about it. I found out how wrong I was."