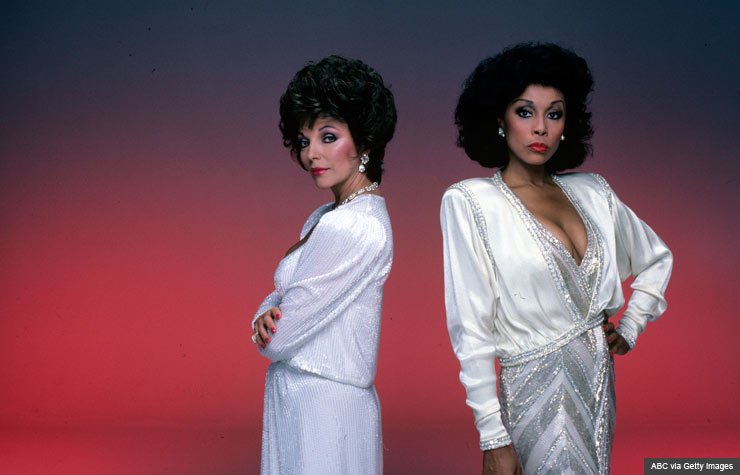 Diahann Carroll broke television barriers in 1968 as the lead character in NBC's Julia, becoming the first black actress to star in her own series. In 1984, she did it again, as the glamorous invader of the all-white environment of nighttime soaps as Dynasty's Dominique Deveraux. 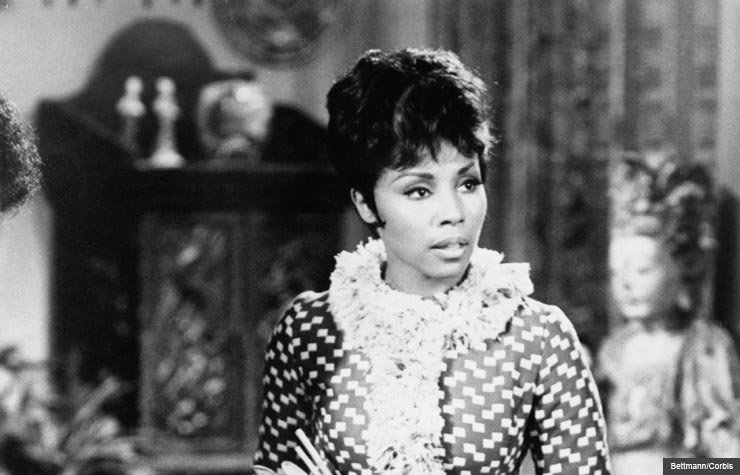 On Jan. 22 Carroll, now 77, appears in the PBS Pioneers of Television segment "Primetime Soaps," which is a look at over-the-top 1980s-era hits such as Dallas and Dynasty.

Diahann Carroll  has also been a singer and Broadway star, and continues to work on popular shows from Grey's Anatomy to White Collar. The oft-married grandmother — once engaged to Sidney Poitier — talked to us about her role in integrating primetime TV, lessons learned from more than five decades as an entertainer, and what it was like to swap slaps with Joan Collins.

Q. What concerns did you have about taking the title role in Julia back when TV was far from integrated?

A. I thought it would be a glorious idea, but the thought of [moving to California and] not being in New York really frightened me. I'm a staunch New Yorker. My parents were there. I married there, I had a baby. And I could see the controversy, that this was considered a major step forward in terms of television shows starring black actors. Fortunately, we went on the air and it was received very well. But in order to make that step, a lot of adjustments had to be made for a little New York lady who thought the world revolved around New York City.

Q. Talk about how you ended up on Dynasty —a world of rich white people with big hair and big shoulder pads.

A. I saw the show and I thought, "Oh, this is absolutely a hoot, I love it." I thought it would be great fun if they thought that I could fit into this. And so my manager and I approached them, and [we had] a meeting. I was absolutely thrilled [to get the part]. I just loved the opportunity to put this character, Dominique Deveraux, on screen. We were all very excited — we knew that it would be the talk of the town.

Q. Talk about how you ended up on Dynasty —a world of rich white people with big hair and big shoulder pads.

A. I saw the show and I thought, "Oh, this is absolutely a hoot, I love it." I thought it would be great fun if they thought that I could fit into this. And so my manager and I approached them, and [we had] a meeting. I was absolutely thrilled [to get the part]. I just loved the opportunity to put this character, Dominique Deveraux, on screen. We were all very excited — we knew that it would be the talk of the town.

Q. There was at least one episode where you and Joan Collins were fighting, hitting and kicking each other. What was it like filming those scenes?

A. I think we loved it, Joan and I. I said, "We have to fight more often." It was funny, and it was also very much what the audience wanted at that time. With the clothes and the hair, it was very clear that we were actually doing this show as a send-up, and I think we did it very well. Of course, we had to fight to make the dialogue overcome the wardrobe [laughs]. I don't know if we ever won that war. 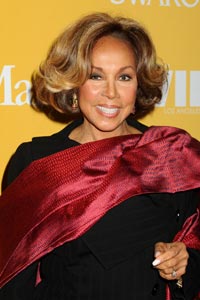 Diahann Carroll on the red carpet, 2012.

Q. You once said that playing Norma Desmond in the Canadian production of Sunset Boulevard in the mid-'90s was the most rewarding role of your career. Do you still feel that way?

A. I would say it was. However, I have paid the price for taking my life to Canada for almost two years and leaving everything — my family, my marriage. It was not an easy time. But it was a great experience, absolutely. Now I do like to do the kind of work that does not involve long periods of time on the road.

Q. You have a recurring role in the USA Network series White Collar. How does the show's filming schedule affect your life in California?

A. It's a wonderful situation. I think last season I shot four or five episodes. I go back to New York to shoot, which I love because my grandchildren live there — ages 10 and 12. They're almost as tall as I am.

Q. An upcoming episode features you singing at the Cotton Club. Was that your idea or the writers'?

A. It was their idea. I haven't done any singing in a very long time. There comes a time where your vocal cords, they look at you and say, "We're tired." But I enjoyed doing it, I really did. It was nice to wake up those areas of my life again.

'Listen more than you speak. Listen, and always ask questions.'

Q. You wrote an autobiography in 2009 called The Legs Are the Last to Go: Aging, Acting, Marrying, and Other Things I Learned the Hard Way. What do you wish you knew in your 30s or 40s that you know now?

A. I've learned a great deal. However, I'm not sure I would have wanted to know it in my 30s and 40s — trying to find out is what gives you your momentum. I think you have to learn it on your own. Although the first thing in the profession that I know now, that I perhaps didn't then, is: Listen more than you speak. Listen, and always ask questions.

I think, too, at this age, I have understood that it's really not necessary to marry everyone that you feel you've fallen in love with. I remember having kind of a conversation like this with Elizabeth Taylor, and I think we'd both come to that conclusion. You don't have to get married! [laughs]

Q. Mistakes are often part of who you are.

A. Mistakes are definitely part of who I am. I wouldn't want to have lived without having those mistakes. So that's why I try to be cautious about advice. I hate giving advice.