The 10 Best Grammy Performances of All Time

From Stevie Wonder to Prince and Beyoncé, these stars ruled the high-profile stage 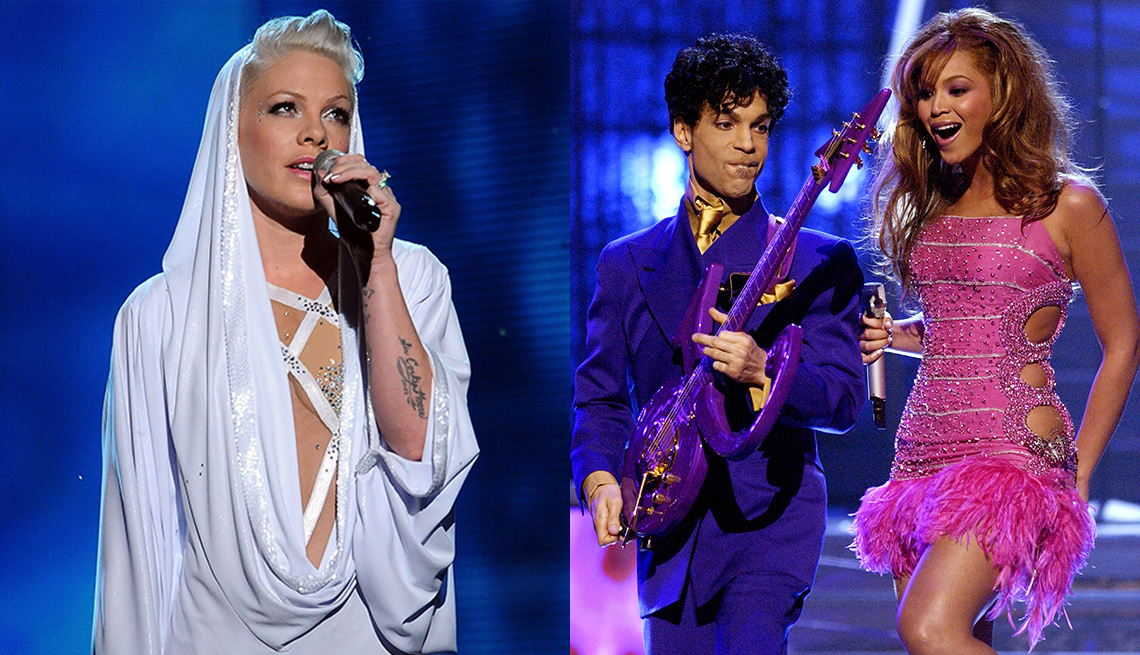 On March 14th, the 63rd annual Grammy Awards will make history with a series of pandemic-related adaptations, including forgoing a live audience, airing a number of prerecorded performances and holding live acts outdoors. Since it began televising live in 1971, the show always has its share of outstanding performances and wild-card moments, as the industry's biggest names take the stage and join forces for unexpected collaborations and tributes. Before settling in for this year's event, have some fun with these 10 unforgettable Grammy performances from 1975 to now. Bet you can't watch just one! 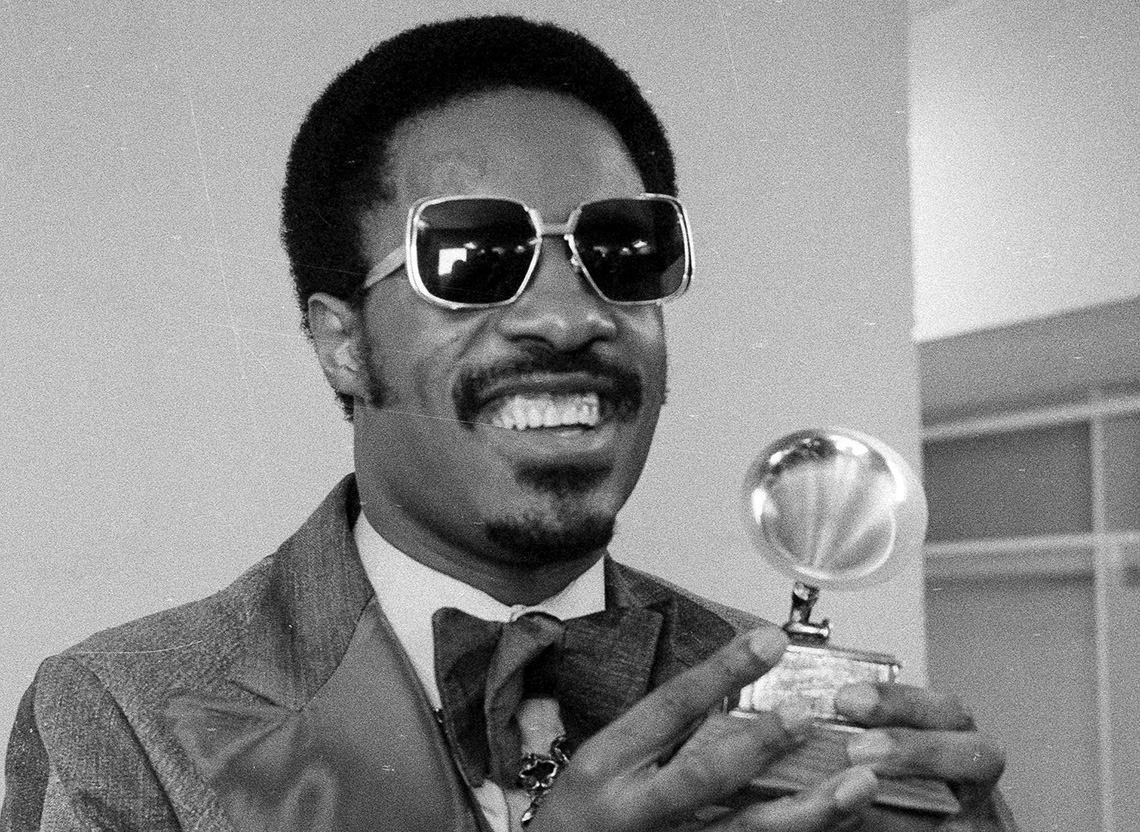 Stevie Wonder has a slate of incredible Grammy performances under his belt, including a funktastic medley with Nile Rogers, Pharrell and Daft Punk in 2014. But this electric performance of his protest song “You Haven't Done Nothin'” got the whole crowd clapping and cheering along, and captured Wonder, just 23, at the height of his musical powers.

Bonus trivia: This song, a searing indictment of President Richard Nixon, came out just two days before he resigned from the presidency. 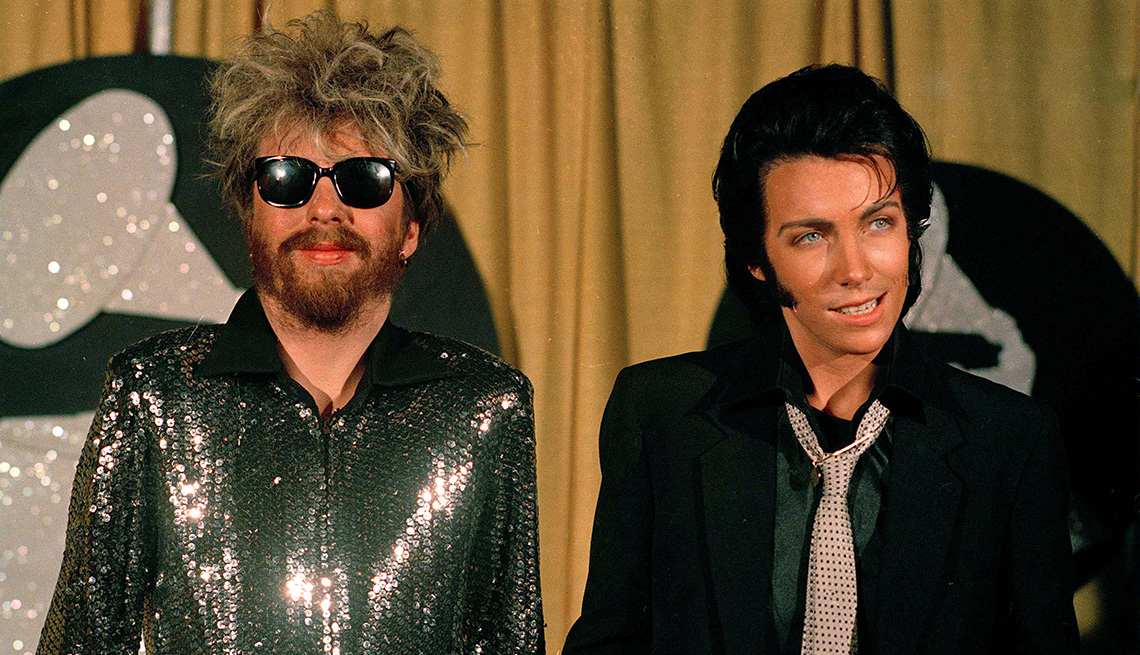 Dave Stewart (left) and Annie Lennox of the Eurythmics at the 26th annual Grammy Awards at the Shrine Auditorium in Los Angeles.
AP Photo/Reed Saxon

The Eurythmics were best new artist nominees the year lead singer Annie Lennox made an unforgettable statement by showing up to the awards in drag, sporting a suit and an Elvis-like pompadour. She then led the band in a swaggering performance of the band's number-one single, “Sweet Dreams Are Made of These.” Her stunt later inspired Lady Gaga, who showed up at the 2011 MTV Video Music Awards dressed as her male alter ego “Jo Calderone.”

Bonus trivia: Lennox had kept her stunt a secret from everyone except for bandmate Dave Stewart, so Grammys producer Ken Ehrlich didn't recognize her backstage and feared she hadn't shown up to perform. 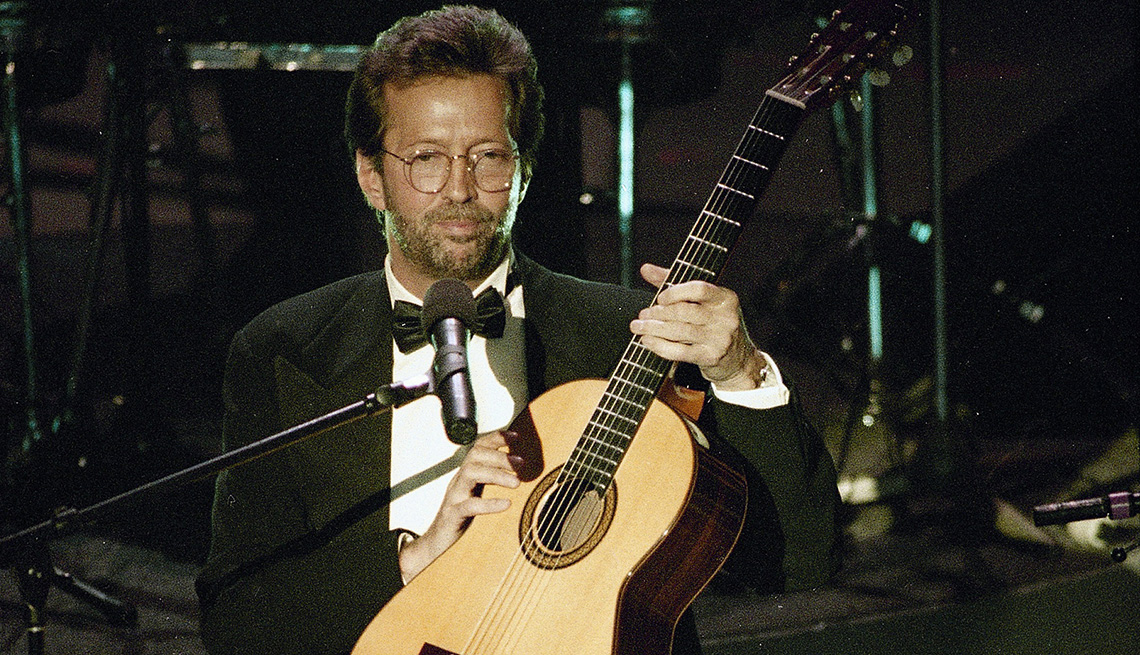 Eric Clapton onstage during his performance of “Tears in Heaven” at the 35th annual Grammy Awards.
AP Photo/Reed Saxon

In an understated showing by the Grammys’ flashy standards, Eric Clapton gave a moving performance of his hit “Tears in Heaven” from the Rush soundtrack. He'd written the song to mourn his 4-year-old son, Conor, who had died in a tragic accident two years prior.

Bonus trivia: That night, Clapton became the first British artist to win six awards at one Grammys, including Record of the Year for “Tears in Heaven.”

RELATED: Willie Nelson and Frank Sinatra, By the Numbers 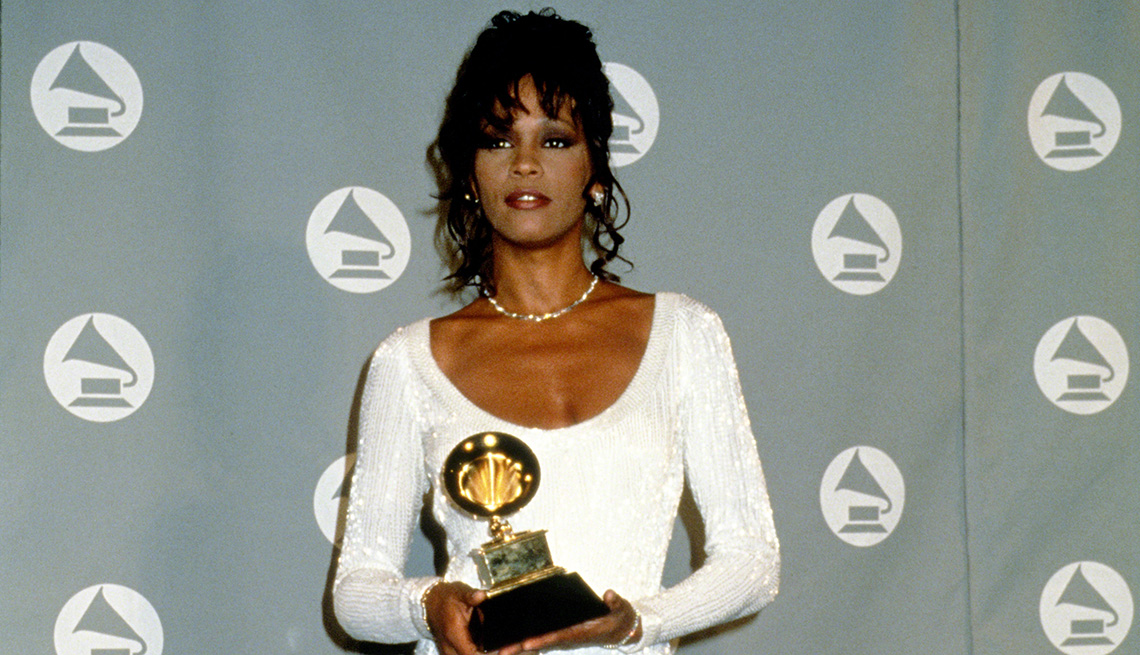 All Whitney Houston needed to stun an audience was a stage. Alone on a raised platform, she opened this Grammys show with a powerful rendition of “I Will Always Love You,” from the soundtrack of The Bodyguard. The song won Houston record of the year, album of the year and best female pop vocal performance. At the 2012 Grammys, held just a few days after Houston's untimely death, Jennifer Hudson honored the singer with a cover of the song.

Bonus trivia: When Dolly Parton, who wrote the original song, presented Houston with a Grammy that night, she jokingly thanked Houston on behalf of “myself and the Internal Revenue Service… When I wrote that song 22 years ago, I had a heartache. But it's amazing how healing money can be.” 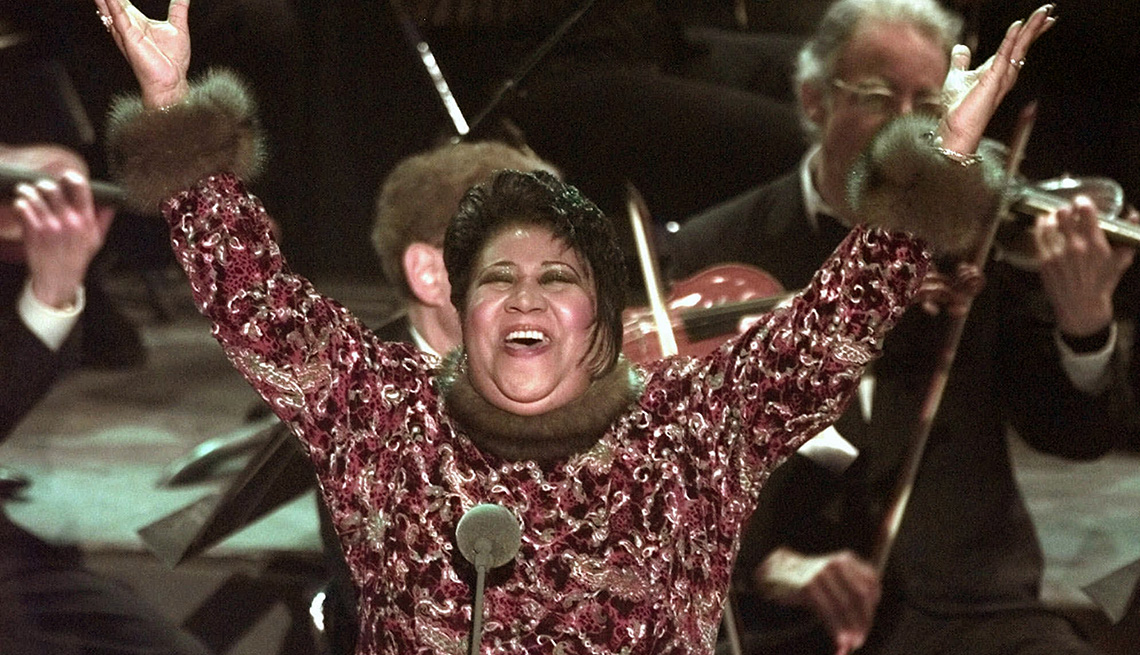 The Queen of Soul shows her command of opera in this transcendent performance of “Nessun Dorma” from Giacomo Puccini's Turandot. Luciano Pavarotti was originally scheduled to perform the piece, but called in sick after the show had already started. Franklin, who had sung “Nessun Dorma” a few days earlier at the Grammys MusicCares benefit, agreed to step up.

Bonus trivia: Franklin performed the aria again in 2015, for Pope Francis during his United States Tour. 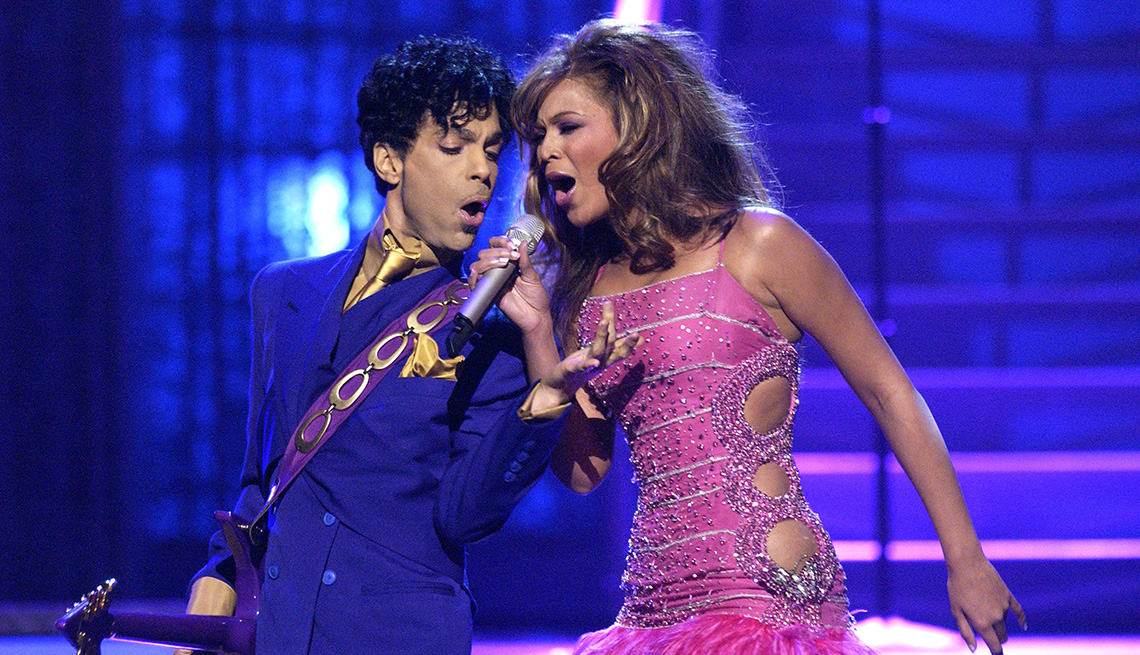 Prince and Beyoncé onstage together at the 46th annual Grammy Awards.
M. Caulfield/WireImage

While Beyoncé has put on a slew of remarkable Grammy performances over the years, including stealing the 2017 show while pregnant with twins, the star power in this duet is practically overwhelming — and it's one of just two performances Prince gave at the awards show throughout his career. Come for the “Purple Rain” duet, stay for the guitar-shredding “Crazy in Love” to “Let's Go Crazy” transition.

Bonus trivia: According to producer Ken Ehrlich, Beyoncé was initially hesitant to agree to the duet because she wanted the opportunity to perform solo. She ended up performing twice that night, which was unheard of for artists at the time. 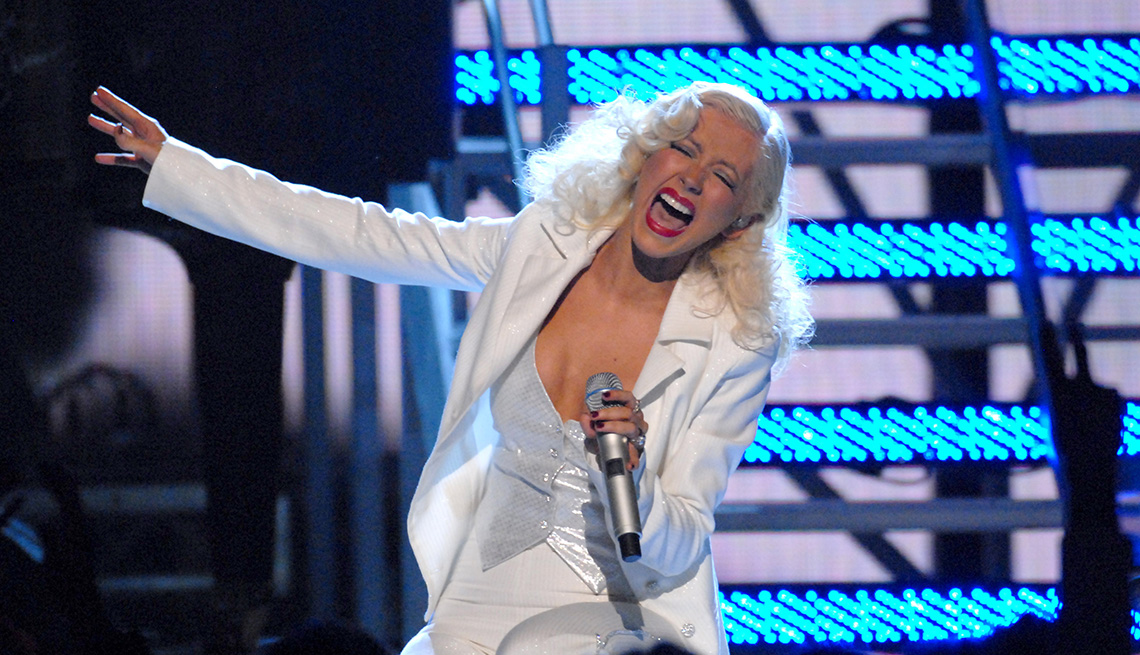 Christina Aguilera gives a tribute performance to the late James Brown at the 49th annual Grammy Awards at the Staples Center in Los Angeles.
Michael Caulfield/WireImage

Christina Aguilera proved herself as one of our greatest modern vocalists during this cover of James Brown's “It's a Man's Man's Man's World,” a tribute to Brown a year after his death. While the pairing might have seemed odd at first, rocker Patti Smith later declared Aguilera's rendition “one of the best performances I've ever seen… at the end, I just involuntarily leapt to my feet.”

Bonus trivia: It might be a man's world, but Betty Jean Newsome, one of Brown's girlfriends, claims that she wrote most of the song. 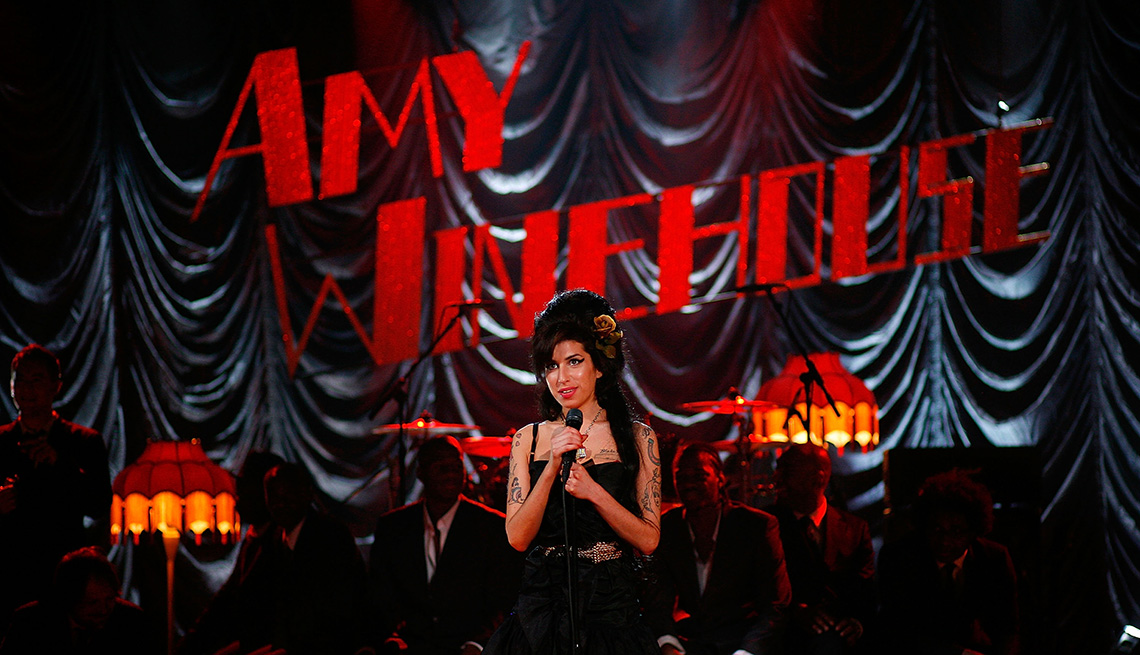 Amy Winehouse performs at the Riverside Studios in London for the 50th annual Grammy Awards.
Peter Macdiarmid/Getty Images for NARAS

A breakout star of the 2008 Grammys, winning five awards including best new artist, Amy Winehouse had to perform virtually, in a livestream from London due to visa issues. But she playfully ran through her Back to Black hits “Rehab” and “You Know I'm No Good” in front of a live audience at London's Riverside Studios, and took home five awards that night.

Bonus trivia: In order to work with the Los Angeles-based broadcast, Winehouse, her band, and her MC — Cuba Gooding Jr. — had to perform after 3 a.m.

Watch it: Amy Winehouse, on Vimeo 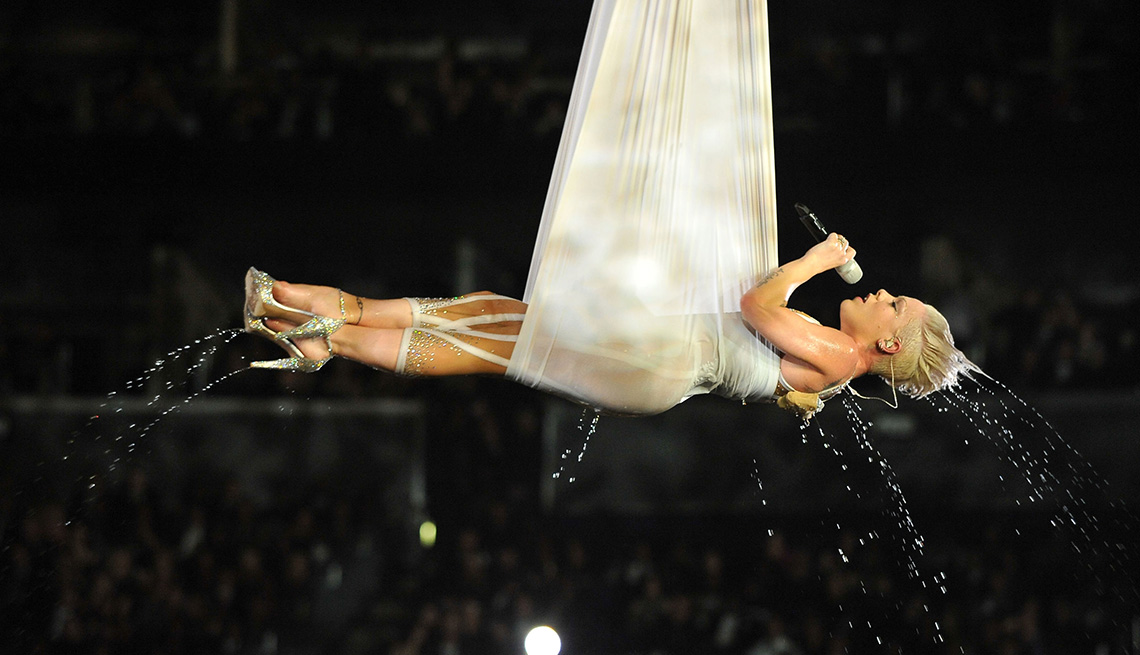 Pink has a soaring performance at the 52nd annual Grammy Awards.
Lester Cohen/WireImage

Pink's vocals literally soared at the 2010 awards, as she belted her ballad “Glitter in the Air” while hanging from the rafters of the Staples Center. Her aerial acrobatics were such a hit that she incorporated the routine into her touring show. 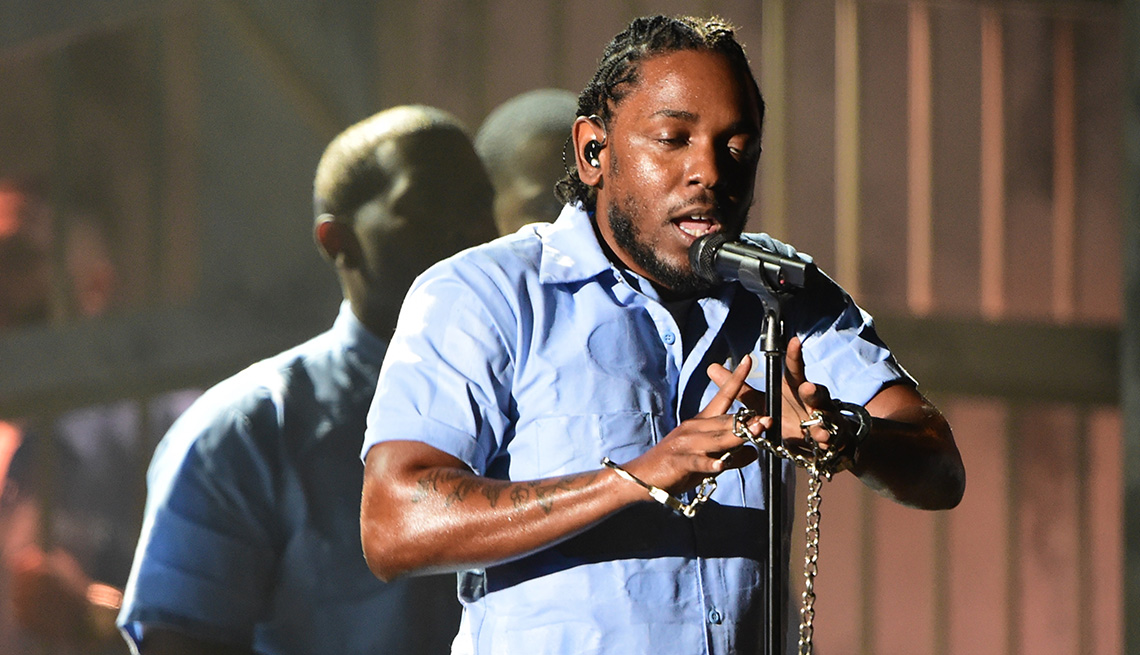 Before Kendrick Lamar became a Pulitzer Prize winner, he stole the show at the 2016 Grammys with a political performance from To Pimp a Butterfly, which won best rap album that year. The set, which began with Lamar's hands in chains and included an onstage bonfire, addressed mass incarceration and the Black Lives Matter movement.

Little known fact: During the performance, Lamar debuted a new verse about the death of Trayvon Martin.

Watch it: Kendrick Lamar, on Vimeo 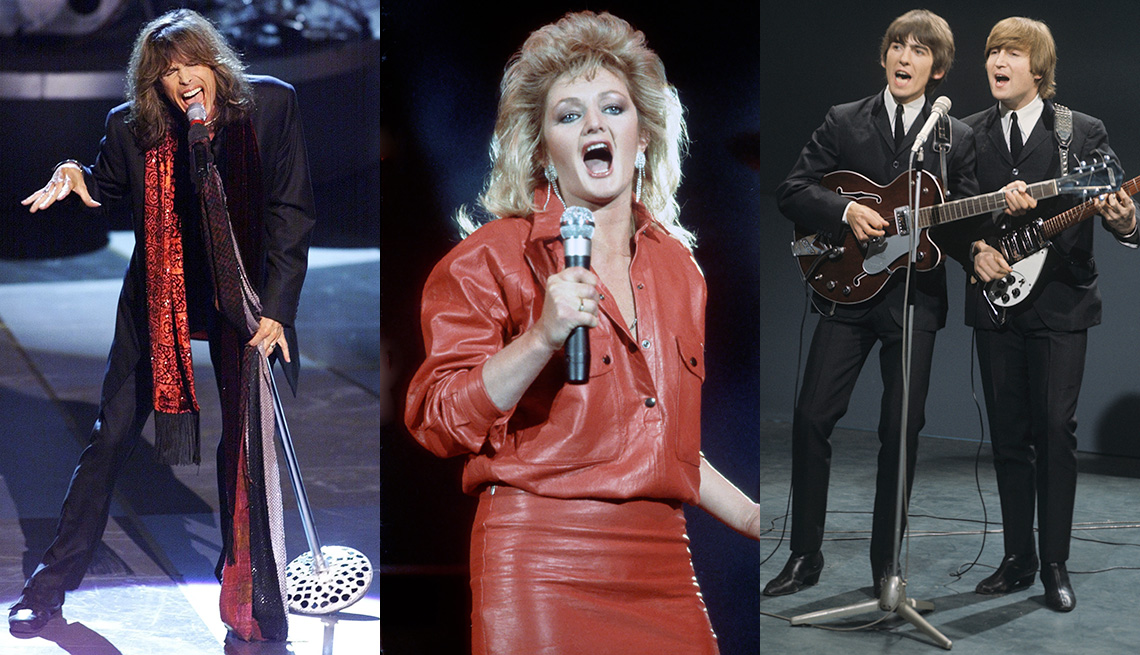 These Well-Known Love Songs Have Backstories You Won't Believe

Let's just say vampires play a role in one 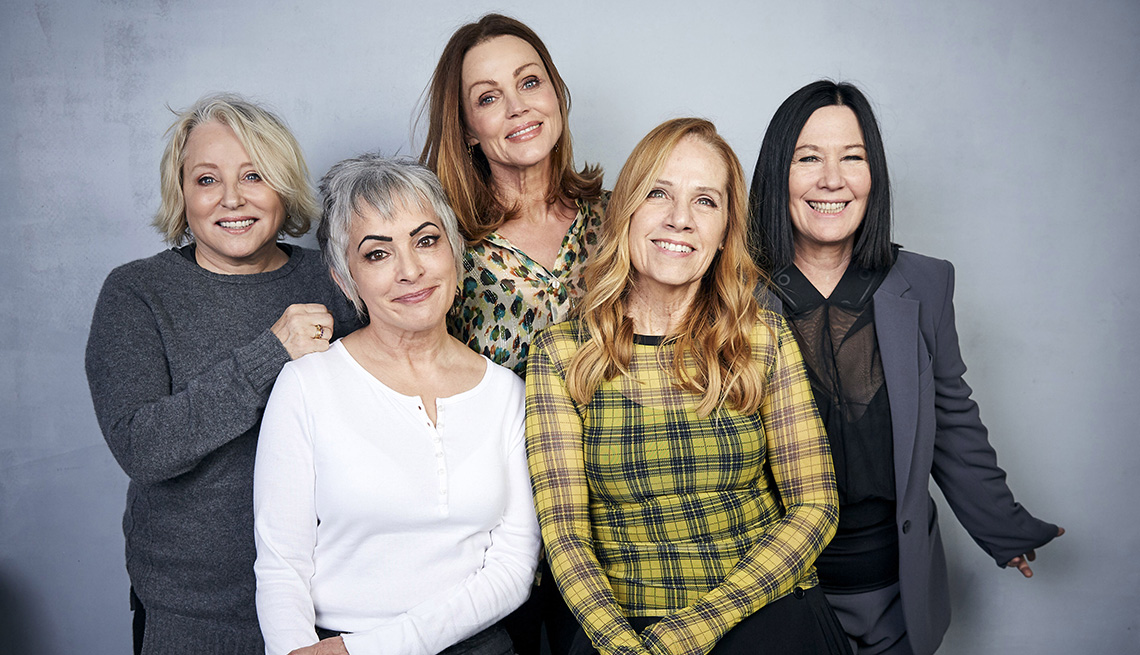 The Go-Go's Belinda Carlisle Explains It All

Pop band's documentary is out on new platforms, along with a fresh video 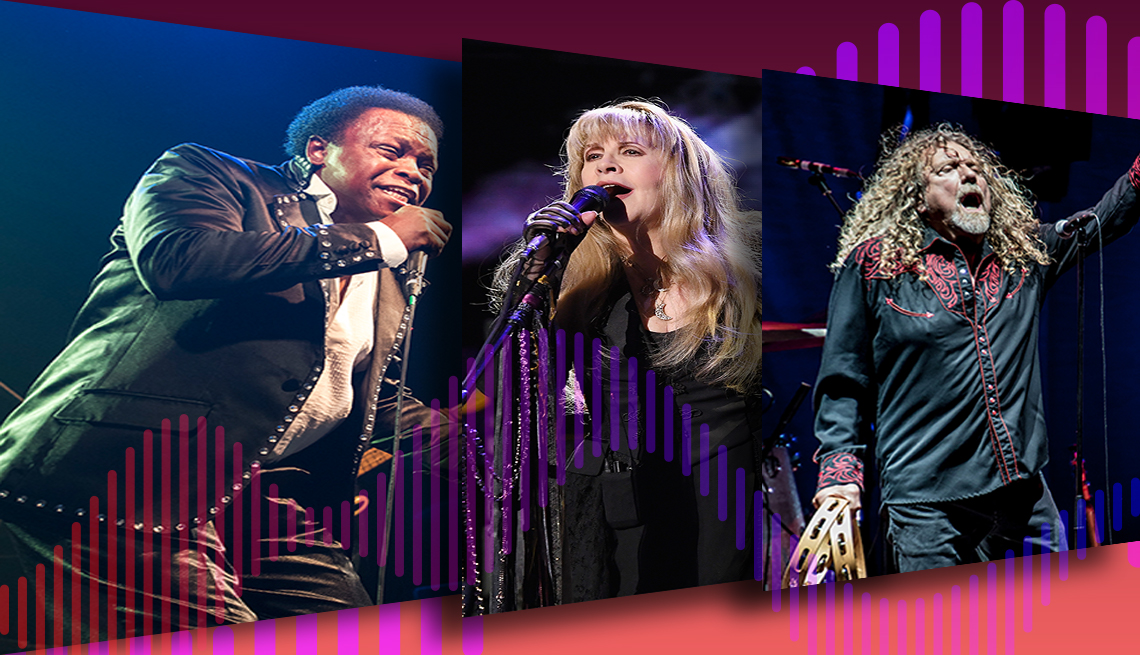 The Power of Music Playlists