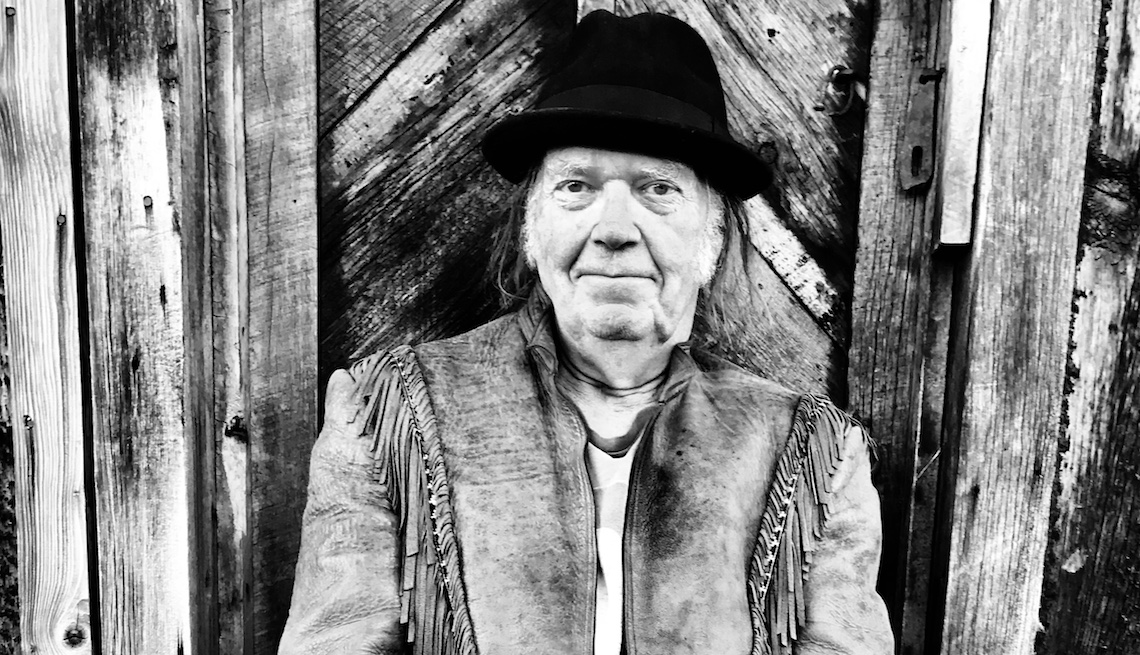 En español | "It's better to burn out than to fade away,” Neil Young famously sang. At 73, the Canadian-born rocker has yet to do either. Colorado, his 39th studio album and first with Crazy Horse since 2012's Psychedelic Pill, arrives with a companion documentary, Mountaintop Sessions, which was shown Oct. 22 in 130 theaters nationwide. The doc, along with unreleased tracks, films, photos and ephemera, is destined for the Neil Young Archives, his ever-expanding online file cabinet that currently holds every note he has ever released.

He and Phil Baker cowrote the new book To Feel the Music, tracking the musician's long uphill quest to restore audio quality to recordings. And he's writing a science fiction novel called Canary.

He and his wife, actress Daryl Hannah, 58, split their time between Malibu and her ranch near Telluride, Colorado.

You've had a long ride with Crazy Horse, ever since Everybody Knows This Is Nowhere in 1969. Does it feel like 50 years?

It feels great. I'd like to do more. We're all on the same page and doing it for the same reason — to serve the music. It's all we've ever done. We're not going to make a crappy record after being together for 50 years. This record is not that different from what we sounded like 50 years ago. There's still that spark of youth.

Much of Colorado focuses on climate change and the environment.

It's the only thing that really matters. People on the streets can't see past next week. They're not thinking about their kids or their kids’ kids. I don't fly anymore, except to Europe. I can't do the (Swedish climate activist) Greta Thunberg thing. She's so great. I tried to reach her but she's swamped; I couldn't get her. I just wanted to tell her to remain positive and not be emotional. She's not very emotional anyway, but when she is, (opponents) are going to grab those images of her face and sensationalize it. You can't give them anything like that to work with.

"Rainbow of Colors” looks at intolerance and immigration.

I reject outright the idea of locking people out and putting up walls. It doesn't make sense to me. One thing I see is that everyone is trying to get away from the hot zones, the equatorial regions. The closer you get to the equator, the more political problems there are, and I think that's directly related to climate change. I see immigration as one offshoot of the climate crisis. People are moving across borders because where they are has gotten sick. It's not a good planet right now.

If radio doesn't play Colorado, who will hear it?

Who knows? It will do what it does. Now people don't buy CDs, they stream, so you don't know how it does. There's no feedback loop. Nobody has been able to explain to me how I get paid for streaming. Apparently they don't have the technology to tell you how many times your songs are played. So I'm throwing it into a black hole.

In 2014, you left your longtime home, Broken Arrow Ranch in Redwood, California, and you and Pegi, your wife of 36 years, divorced. She died of cancer in January. Were these hard losses?

Pegi was a very hard loss. She was a great mom, and she did a lot that no one else will be able to do. The ranch was a beautiful place, but moving on is not a bad thing. I had a really good period of time there, when I raised my kids.

"Now I'm walking, swimming. Maybe tomorrow morning I'll be stand-up paddling. I lost between 30 and 35 pounds in six months. Nice that I don't have to carry that around anymore."

How are you adjusting to aging?

I'm trying to take care of myself. Daryl's a big help. She's very health-oriented, which I never have been. Now I'm walking, swimming. Maybe tomorrow morning I'll be stand-up paddling. I lost between 30 and 35 pounds in six months. Nice that I don't have to carry that around anymore.

Any reason you haven't yet announced a tour for this album?

I was just offered millions of dollars for a tour to do Harvest. Everyone who played on Harvest is dead. I don't want to do that. How about planting instead of harvesting? If I decide to go on the road, I'd like to do a democracy tour next year with different people that keep changing. Not right or left. Democracy is not you on this side and me on that side just to see who wins.

You're locking up your legacy in the Neil Young Archives, which now has your own high-res streaming, Xstream by NYA.

It will have everything I've done at the highest level possible in chronological order. I'm making it for myself, number one, and for anyone else who cares. I love protecting the music and I don't care if I make money. There's so much material. Between the Ragged Glory and Weld albums, I did a one-off show with Crazy Horse in Santa Cruz, recorded it with six cameras and the best digital available at that time. We did three sets and an encore. It may be the best live performance of Crazy Horse ever captured, and I just found it. We're going to try to make a record of it.

In To Feel the Music, you chronicle the rise and fall of your Pono high-res digital download player and service. Where did you go wrong?

Pono had a good start. It showed that people wanted something. I was in the wrong lane, the download lane. Everyone else was in streaming. It was so convenient. But I was blinded, because streaming sucked. It was my error.

Are you feeling more positive about improvements in audio quality?

Amazon is the first big company to go high-res. Amazon has seen the light. They like disruptive things, and they've done a big favor to music. You might have to buy a few things. A digital-to-analog converter could be as cheap as 99 bucks. Plug it into your stereo system. Use wires. We've gone the wrong way on a lot of stuff because things are designed for digital. At least Amazon is leading. They are so far ahead of Apple and Spotify. Qobuz is OK. Tidal is OK but they screw with the sound. We made the sound, just play it back, thank you. As much as I love Jay Z, I think Tidal missed the boat technically and now they've been surpassed completely.

What advice do you have for aging fans who stopped listening to music years ago?

They may not be listening because they don't get from it what they used to. For their own souls, they should know it wasn't them. It's technology. At the same time we were getting older, the sound quality went down. It's been degrading over the last 35 years. Now they can set up a system and drive it with an Amazon app. It's something to do. How often do you have a chance to learn something new about something you love?

How likely is a Crosby, Stills, Nash & Young reunion considering David Crosby has burned so many bridges?

Crosby should write an introspective book: Why People Won't Talk to Me Anymore. He made a lot of great music for a long time. I don't know what happened with David. I got nothing to say. I love Stephen. I love Graham. If a reunion happens, it would be a surprise. I won't close the door on anything. I can hold a grudge with the best of them but only if there's a reason for it.

As the cofounder of Farm Aid, how do you view the state of farming in America?

I say tear the whole thing down and start over. We're damaging earth by the way we grow. Industrial agriculture is a scourge on the earth. They've displaced all these working people who loved the land and took care of it. The big agriculture companies only care about the bottom line. You have to work with nature. The thing is, it's reversible. We need world leaders with brains. No more chemical farming. Stop using GMO seeds. Why do seeds have to be owned by someone else? I say that seeds are owned by God.

Are you planning to work indefinitely?