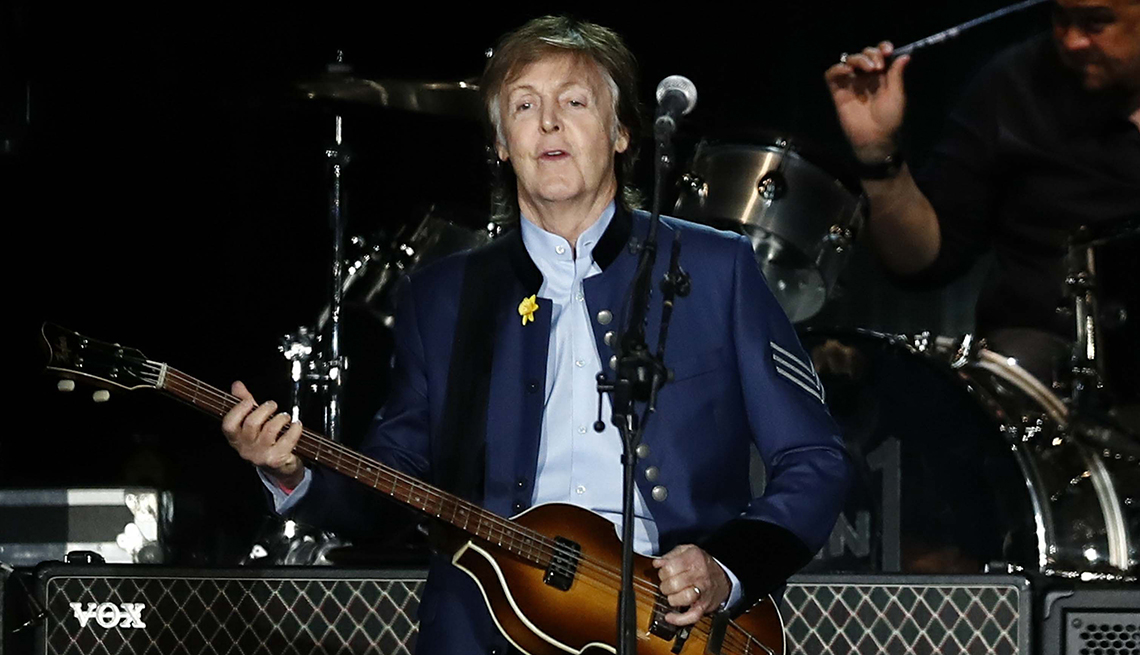 Paul McCartney, pictured here during a 2017 concert in Mexico City, this week is releasing "Egypt Station," his 17th solo album.

Some 48 years after the Beatles called it quits, Paul McCartney releases Egypt Station Friday, his 17th solo album. It's a diverse batch of love songs and lively rockers that merge both his modern and traditional impulses.

McCartney has released 16 previous solo albums, seven Wings releases and sundry classical records, scores and collaborations, so fans have been steadily nourished by his long and winding second act. The Cute Beatle turned 76 in June, and while his vocals have lost some range and vigor, he is not coasting on his résumé or phoning in leftovers. One need only to watch his Carpool Karaoke performance with James Corden to see the pleasure he still takes in his work.

McCartney’s enthusiasm is palpable throughout the 57-minute Egypt Station (titled after one of his paintings), and he’s clearly pushed into new sonic territory to dress up his signature nursery-rhyme melodies and cheery mix of optimism and nostalgia.

With the exception of one track, the collection was produced by Greg Kurstin, who has worked with such contemporary luminaries as Adele, Beck, Pink, Kelly Clarkson and the Foo Fighters.

The first sample of their handiwork came in June with the release of the brooding, doubt-riddled “I Don’t Know” and thumping rocker “Come On to Me," featuring the Muscle Shoals Horns. The latter teases with a sexy sizzle that might have seemed creepy coming from any other septuagenarian, but feels perfectly in step with McCartney’s waggish charm.

The same can’t be said for a similarly frisky composition. The cheeky and peppy “Fuh You," produced by hitmaker Ryan Tedder (Beyonce, Taylor Swift, Ariana Grande) falters with a double entendre that’s more juvenile than playful. McCartney describes the tune as “a raunchy love song,” and when he rush-mumbles “I just want it fuh you,” the bubbly dance track indeed takes a tacky turn.

As on recent works, McCartney is the heavy lifter on Egypt, playing multiple instruments, including drums, and relegating his touring band to minor roles. Aside from wisps of strings and dulcimer, he is unaccompanied on the intimate “Confidante," his dreamy rumination on a bygone companion. He plays a host of instruments on “Dominoes," a hook-laden pop gem that finds McCartney at his peak powers lyrically and melodically.

Egypt begins with “Opening Station” and closes with “Station II,” a pair of atmospheric instrumentals. In between lie such predictable Macca hallmarks as the sugary acoustic love song ("Happy With You"), the delicate ballad ("Hand in Hand"), the scruffy rock tune ("Caesar Rock") and the uplifting anthem ("People Want Peace").

The common thread holding the new album's creative whimsies together is McCartney’s passion. He still loves making music as much as his most ardent fans love hearing it.

And then there are the surprises.

"Back to Brazil," an up-tempo orchestral Latin jazz number, enlisted composer Alan Broadbent to help shape the arrangement. The smooth groove belies the song’s cluttered construction: a big choir, a string quartet recorded at Abbey Road, a full orchestra recorded in Los Angeles and a riot of instruments from flute and congas to duduk.

Another standout is the ambitious “Despite Repeated Warnings," which shifts from a grand progressive rock to symphonic pop while dishing up politically pointed barbs that are ambiguous enough to apply to any fill-in-the-blank scandal or scoundrel.

The last full track on the album is the instant medley “Hunt You Down/Naked/C-Link," an adventurous triptych that kicks off with new wave rock crunch, moves into trippier musical turf and wraps up with a deep blues instrumental.

Egypt Station is anything but stationary, with McCartney darting from fragile valentines to burly rock, from harpsichord to ankle bells, from honeyed croon to rebel growl, from old school to “What does that button do?

The common thread holding Egypt’s creative whimsies together is McCartney’s passion. He still loves making music as much as his most ardent fans love hearing it.

Sadly, though, even a Beatle loses radio cachet with the passage of time, and McCartney has seen his ranking in the hit parade fall under the march of youth culture. Egypt has triggered an uptick. With “Come On to Me," McCartney has risen to the top 10 of Billboard’s Adult Alternative Songs airplay chart for the first time since 1997, when the Flaming Pie track “The World Tonight” reached No. 9.

McCartney doesn’t need the chart stats, of course. He has written or cowritten 32 songs that topped the Billboard Hot 100. He does, obviously, feel the need to continue expressing his musical ideas. And he does so with an urgency that suggests he knows he has more yesterdays than tomorrows. On “Do It Now," he could be talking to himself when he sings, “Do it now while your vision is clear. Do it now while the feeling is here. If you leave it too late, it could all disappear.”