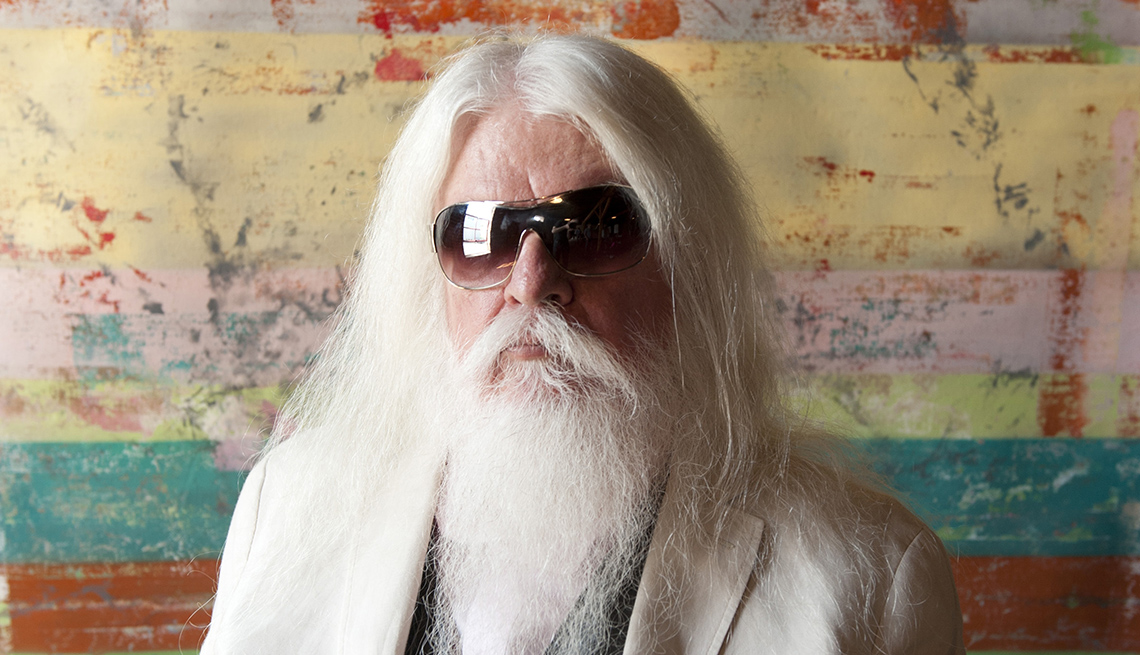 On the occasion of Life Journey, his 37th album, we sat down with piano icon Leon Russell on his estate outside Nashville to get his quick takes on the greats he's played with during a storied career.

Leon Russell on Doris Day: I've always felt I struck out with Doris Day. Her son, Terry Melcher, was a producer I worked for at Columbia, and one day he asked me to go to her house to play piano on a song she was doing. So I get there and she has about 30 dogs running around the place — turns out she's a dog rescuer. I couldn't play the song she wanted me to very well, but she couldn't stop raving about the car I was driving at the time, a beige Cadillac convertible.

On Frank Sinatra: I played on a few Frank Sinatra sessions [including "Strangers in the Night"]. I had one of those Jay Sebring haircuts in the '60s, because the back of my hair stuck up like Alfalfa's from The Little Rascals. Jay had invented this spray that made your hair into a football helmet, but I didn't have time to use it before one of Frank's sessions, so my hair was just hanging down and looking weird. Mr. S. stared at me so hard he ran right into a post. [Laughs]

On George Harrison: He was an amazing guy — "spiritually correct," as his widow, Olivia, once said about Elton John. I visited George over in Henley-on-Thames, at that castle he had, and he gave us a tour of the dungeon below the house. To reach it, you had to walk through a tunnel with a creek running down the middle, and he made us all put on galoshes. Then, George starts walking out in the creek, so I follow him; suddenly, there's this pond, and he walks right out on the water! I thought, "Oh, my God — George Harrison really is a religious figure!" [Laughs] When I caught up to him, I found out the water was only an inch deep. [Laughs]

On Eric Clapton: I did my first [solo] record in England, and Glyn Johns was the engineer. We were listening to a playback, and I said, "Boy, Eric Clapton would be good on this."

Then he stayed on the phone and called George and Stevie Winwood and Charlie Watts and Bill Wyman. Pretty amazing.

On Bob Dylan: I learned a lot from that guy, both up close and from a distance. He's not known for spilling the beans, but he answered every question I ever asked him about the music business or songwriting. In between shows at the Concert for Bangladesh [at Madison Square Garden on Aug. 1, 1971], Bob and I sat on one side of the dressing room together, and he played a little concert for me. I'd say, "Play 'It's All Over Now, Baby Blue,' " and he'd play it. He played about 20 songs for me. He'd been off for two years since his motorcycle accident, and he wasn't sure we'd sell out the second show. But we did!

On Elton John: When he called me [in 2009] and asked me if I'd like to do an album, I hadn't spoken to him in 35 years. I was basically sitting home watching soap operas at the time, because I had taken two years off. When I came back, it was pretty much all gone — hard to get bookings, and then they were considerably different than before. I kept thinking somebody was gonna come back and get me [laughs], but they never did — except for Elton. That's why I tell people he came and found me in a ditch by the side of the highway of life. [Their collaboration yielded The Union, nominated for a Grammy in 2010.] Then I showed up an hour late for our first recording session — I'd been in the hospital — and Elton had written four songs already! [Laughs] So I thought, "Well, this should be easy!"

Rock critic Alanna Nash first saw Leon Russell in concert in England in 1971. She's been lining up for his shows ever since.